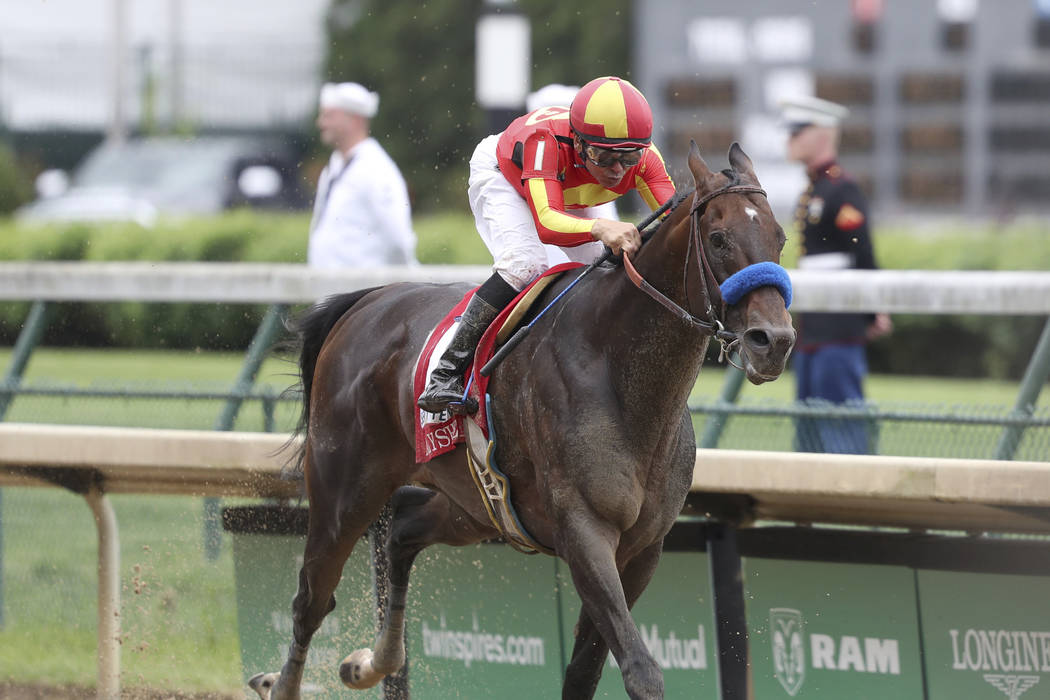 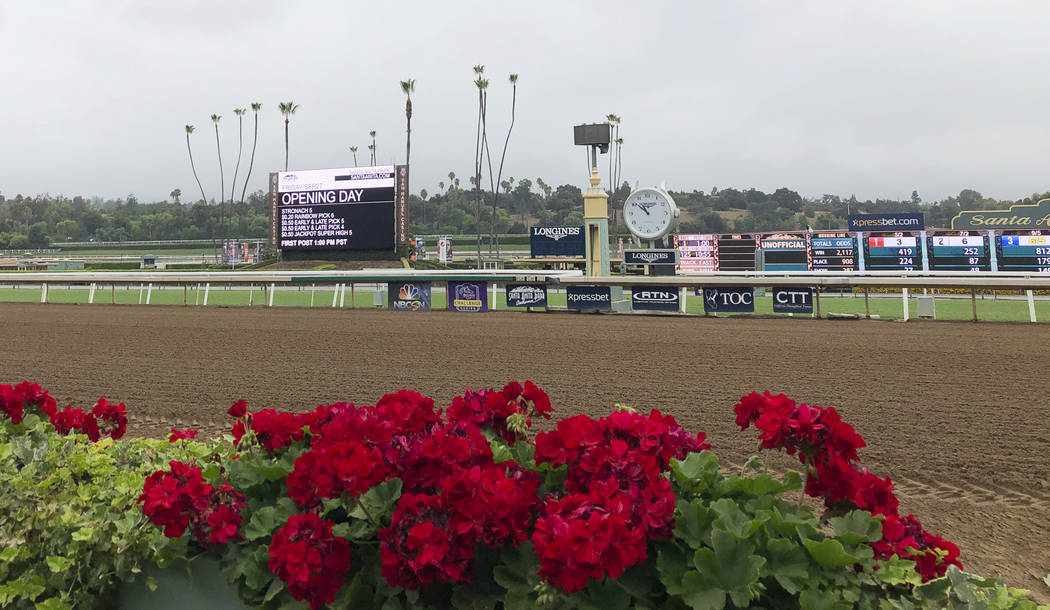 Flowers frame a new infield video board and the finish line ahead of opening day of the fall meeting at Santa Anita Park in Arcadia, Calif., Friday, Sept. 27, 2019. Horse racing has returned to Santa Anita with the opening of its fall meet amid intense scrutiny after the deaths of 31 horses at the historic track earlier in the year. There were no incidents during morning training hours or through the first three races Friday. The nine-race card includes three graded stakes races, with two of those winners earning automatic berths in the Breeders' Cup this fall at Santa Anita. (AP Photo/Beth Harris) 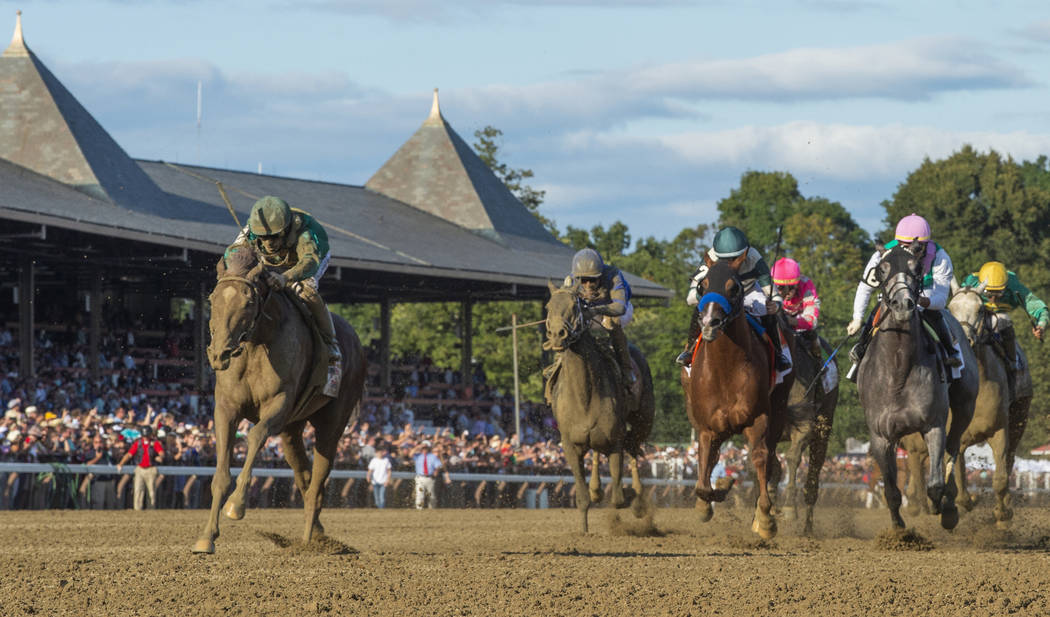 With Breeders’ Cup pre-entries announced Wednesday, handicappers are itching to get down to some serious number crunching for the 14 races that make up the world championships of thoroughbred racing Nov. 1-2 at Santa Anita Park.

While the urge to scratch that itch by getting into detailed analysis is almost irresistible, I’d advise waiting until entries are finalized before taking a deep dive. Any late defections can seriously change the complexion of a race, forcing you to go back to square one in your analysis. And given the massive amount of data, video and news reports to sift through in the next week, extra work is the last thing anyone needs.

Even then, you’ll need to keep in mind that 24 of the 188 pre-entered horses were “cross-entered” into two different races, giving the trainers options if their charge doesn’t draw into a race that’s oversubscribed or they decide at the last minute to dodge a feared competitor. That, too, can require a complete reassessment.

It’s also worth noting the horses that were cross-entered in case they don’t make it into their desired race. That doesn’t mean they can’t win, but I generally give a demerit to any horse that doesn’t get to run in the race that was intended. You can find the complete list of pre-entries at breederscup.com.

Apart from that, this week is a great time to watch as many race replays as you can, take detailed trip notes, watch workouts, plot pace figures and generally familiarize yourself with the competitors in each race. Then you’ll be well-positioned to sprint for the wire after post positions are drawn beginning at 3 p.m. Monday and all remaining suspense, except for possible late scratches, is lifted.

We’ll have much more on the races, including selections for all races by the #RJhorseracing handicappers and yours truly, in next week’s column. I’ll be reporting on both days of racing.

The charade surrounding Santa Anita’s ban of Hall of Fame trainer Jerry Hollendorfer spiraled even deeper into the absurd this week when Breeders’ Cup officials decided to honor the penalty imposed without any apparent evidence by the track’s owner, The Stronach Group. The net effect is that Hollendorfer had to transfer two Breeders’ Cup eligible horses — Vasilika, pre-entered in the Filly & Mare Turf, and Danuska’s My Girl, bound for the Filly & Mare Sprint — under his care to his former assistant trainer, Dan Ward, and transfer his ownership share in Vasilika to his wife, Janet.

If anyone thinks Stronach Group management is making either of these races remotely safer by forcing such bureaucratic maneuvers, I have a horse I’d like to sell them.

The #RJhorseracing handicapping crew is back in action this weekend, sharpening their knives for the Breeders’ Cup on the $100,000 Awad Stakes, a 1-mile turf race for 2-year-olds at Belmont Park, and the $200,000 Hagyard Fayette Stakes, a Grade 2 test for 3-year-olds and up at 1 1/8 miles on the main track at Keeneland.

I’m going to my Corona beach and backing No Lime (15-1), a Bill Mott-trained stablemate of the favorite, who ran a better-than-it-looks race in the Grade 3 Pilgrim Stakes behind three horses headed for the Breeders’ Cup Juvenile. I’ll use Get Smokin (9-2) and Talking in the minor placings.

In the Hagyard Fayette, the crowd ’cappers are edging out on a limb and backing the sharp class-rising Mocito Rojo (6-1), who’s riding a five-race winning streak, to edge favored Tom’s d’Etat (2-1). They have Bal Harbour (7-2) in the show slot.

I’ll go with Bal Harbour on top off his bang-up second to Preservationist in the Grade 1 Woodward Stakes in August, with Mr Freeze (7-2) and Tom’s d’Etat filling out my ticket.

We’re also starting a new handicapping contest, which will run through Dec. 28 and will bestow a semi-fabulous prize on the handicapper who amasses the biggest mythical bankroll. It’s free and fun, and there’s still time to get in. Simply email me or follow me on Twitter and let me know you’d like to play along before noon Saturday.