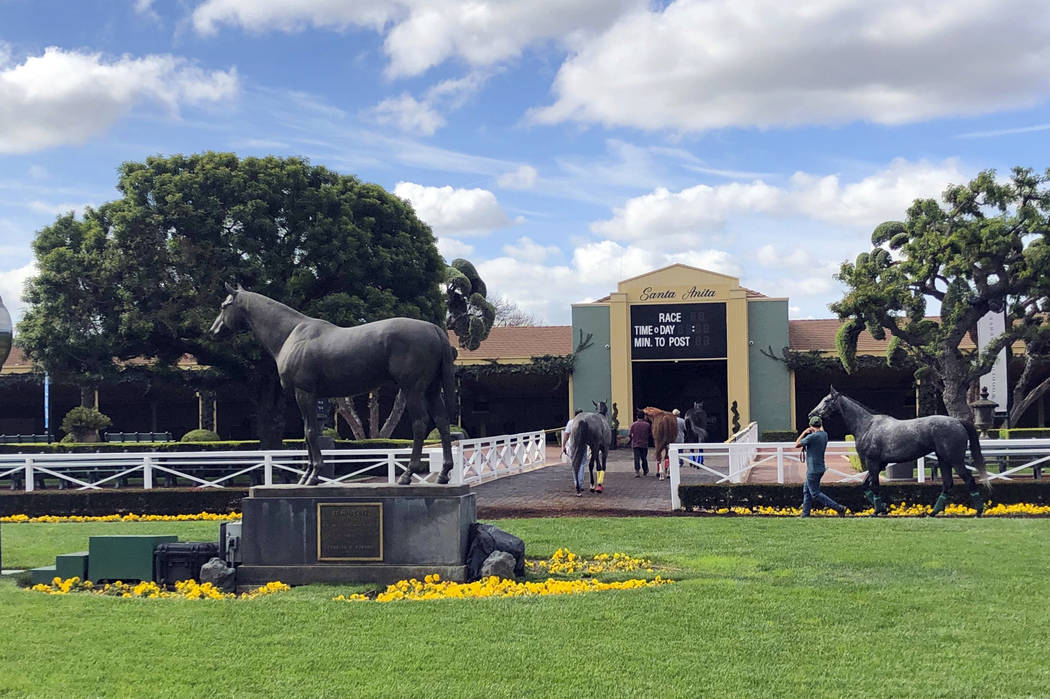 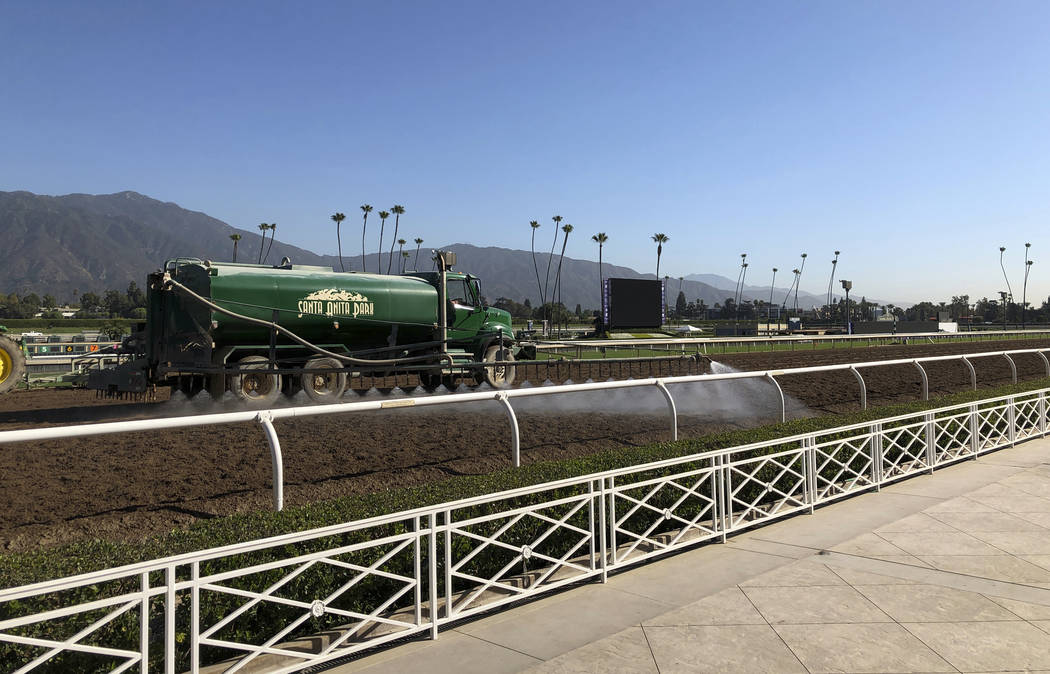 A truck waters the track at Santa Anita Park in Arcadia, Calif., Wednesday, Oct. 30, 3019. A tragic, wild and unusual year in horse racing culminates with the Breeders' Cup world championships this weekend at Santa Anita, where the fatalities have prompted investigations, outrage from the public, and animal rights activists demanding the end of racing in California. (AP Photo/Beth Harris)

For those unfamiliar with the “Seinfeld” episode where Kramer visits a New York City OTB parlor to bet on a mudlark, I highly recommend a visit to YouTube to catch up on that classic piece of horse player humor.

But apart from that, perhaps you wondered as I did whether the decision to postpone the traditional opening day at Santa Anita on Dec. 26 to Saturday when rain showed up in the forecast meant the track will no longer conduct racing any time precipitation appears likely.

Happily, for those who relish trying to figure out whether a horse will handle a track that is rated “sloppy,” “muddy,” “heavy” or “good,” the answer is no.

Mike Willman, director of publicity at the Great Race Place, explained Thursday that the call to cancel the Boxing Day card was based on the specific forecast, not a blanket policy to avoid racing on “off” tracks. And in this case, the call was the right one, he said.

“It really rained heavily overnight, the snow fell way down the mountain and it’s 46 degrees here,” he said. “We would have been off the grass and our gate would have suffered.”

Instead, the track will present its strong opening day 11-race card, featuring three Grade 1 stakes, two Grade 2s and a Grade 3, on a day forecast to be sunny with a high temperature in the low 60s.

Officials at the Arcadia track are understandably gun shy about equine safety after last year’s god-awful winter-spring meet, which saw 30 horses die from injuries suffered while racing or training.

But unless a forecast calls for really bad weather, the show will go on, Willman said.

As for Saturday’s card, if you’re planning a trip to the track or intend to watch and wager at your favorite racebook, get there early. First post time is 11 a.m., with admission gates opening at 9 a.m.

The #RJhorseracing handicappers would not speak to me for months if I didn’t let them dip into Santa Anita’s Saturday card, which will be highlighted by what is expected to be the penultimate start of Omaha Beach’s abbreviated career in the $300,000 Malibu Stakes. But since that race only drew five competitors, we’re focused on more challenging fare: the $300,000 American Oaks, a 1 1/4-mile Grade 1 turf race for 3-year-old fillies, and the $200,000 Mathis Brothers Mile, a Grade 2 mile turf race for 3-year-olds.

In the former, the crew is solidly behind 2-1 morning line favorite Lady Prancealot, who steps up in class off a win in the Grade 3 Valley View Stakes at Keeneland in her last start. They see Apache Princess (5-1) and Mucho Unusual (4-1) filling out the top placings.

I agree that Lady Prancealot is the one to beat, but there are lots of questions to be answered at a distance most of these lasses have never even tried. I’ll go instead with Giza Goddess (7-2), who starting outside the only other speed horse in the field and I hope can she relax a bit off moderate early fractions and then kick away at the top of the stretch. I’ll take Lady Prancealot to place and pick long shot K P Slickem (15-1) in third.

In the Mathis Brothers Mile, the crowd ‘cappers can’t say no to Mo. That would be Mo Forza, the 9-5 morning line favorite who comes in riding a three-race win streak. They have Neptune’s Storm (3-1) as their solid pick for second, and Bob and Jackie (6-1) barely hanging on for third.

Mo Forza is the obvious horse in here, but I’ve got to take a shot with Kingly (6-1), who appears capable of controlling this one on the front end. Bob Baffert isn’t well known for training turf runners, but he knows what to do when he finds one in his shedrow. I’ll use Mo Forza and Neptune’s Storm in the minor placings.