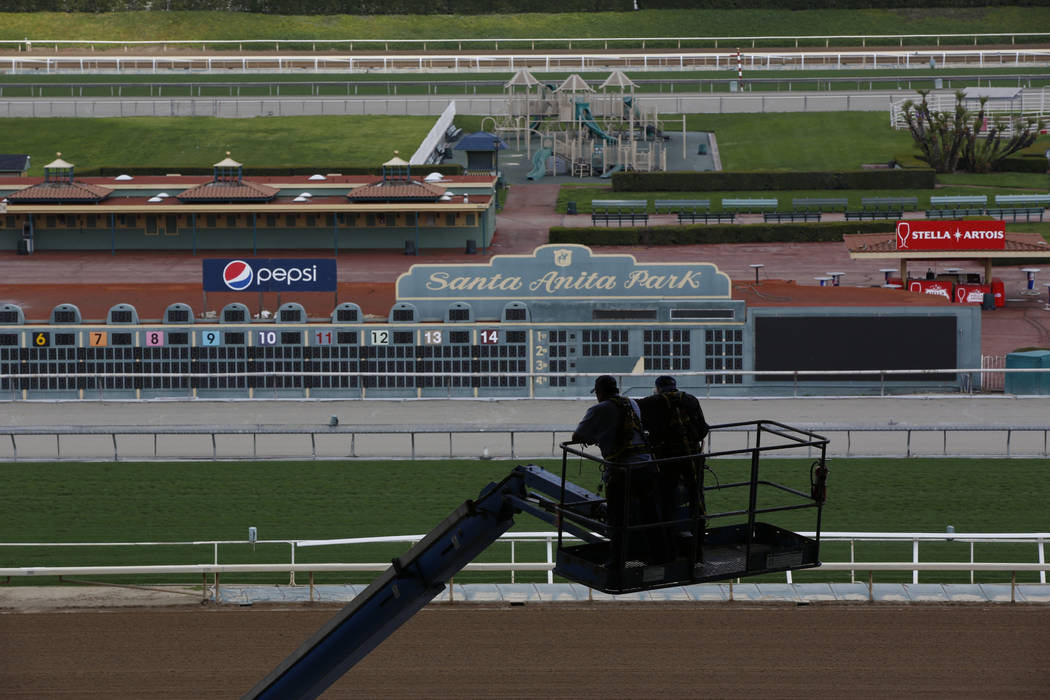 The home stretch and stands are empty at Santa Anita Park in Arcadia, Calif., Thursday, March 7, 2019. Extensive testing of the dirt track is under way at eerily quiet Santa Anita, where the deaths of 21 thoroughbreds in two months has forced the indefinite cancellation of horse racing and thrown the workaday world of trainers, jockeys and horses into disarray. (AP Photo/Damian Dovarganes) 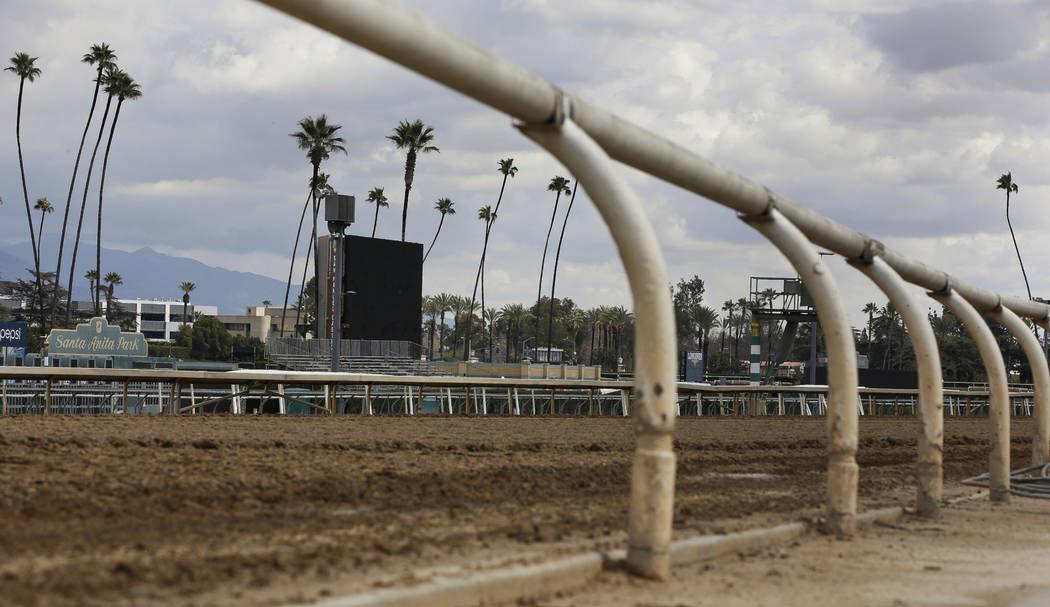 Shows the empty home stretch at Santa Anita Park in Arcadia, Calif. on March 7, 2019. A filly broke both front legs at the end of a workout on the main dirt track at Santa Anita and has been euthanized, becoming the 22nd horse to suffer catastrophic injuries since Dec. 26. Trainer and owner David Bernstein says the 3-year-old filly named Princess Lili B broke down just past the finish line on Thursday morning, March 14, 2019. (AP Photo/Damian Dovarganes, File)

To say that the fall race meeting that begins Friday at Santa Anita Park is pivotal to the future of “The Great Race Place” is likely an understatement.

The track will be under the microscope during the 23 days of racing that will culminate with the Breeders’ Cup races on Nov. 1-2 following the deaths of 30 horses during its winter-spring meeting. The focus on Santa Anita was only intensified by a nearly fatality-free Del Mar meet this summer.

Management with The Stronach Group, which owns the track, has taken steps to improve safety, including resurfacing the track, checking the grading and adding a new drainage system.

It also has a team of seven veterinarians who will physically inspect each horse before it trains or races and will continue to maintain race-day medication limitations it imposed in the spring as the equine death toll began to mount.

But pressure also has been mounting on the both The Stronach Group and the California Horse Racing Board, which also has drawn criticism over the wave of deaths, to do still more. Expect animal rights protesters to again line up outside the gate daily .

The industry has begun fighting back. Counterprotesting racetrack workers can now be seen marching at the gate as well, making the dual points that racing provides many thousands of jobs in the state and that the horses are well cared for. And an #Iamhorseracing social media campaign has been mounted to showcase racing insiders telling heart-warming stories about their love of horses and touting the quality of care they receive.

Even so, there were indications this week that the sport may be losing the PR war in a state where animal rights activists’ political influence is growing.

In an interview with The New York Times, California Gov. Gavin Newsom blasted the CHRB and the racing industry at large for not doing enough to prevent catastrophic breakdowns.

“I’ll tell you, talk about a sport whose time is up unless they reform, that’s horse racing,” he said. “Incredible abuses to these precious animals and the willingness to just to spit these animals out and literally take their lives is a disgrace.”

“… The more you realize what’s really going on, the more intolerant you become of certain behaviors. If you don’t reform yourself, you’re going to get run over and others are going to reform for you in ways that you don’t like.”

While racing fans will want to watch the Jockey Club Gold Cup at Belmont Park and the Awesome Again Stakes at Santa Anita on Saturday, both key preps for the Breeders’ Cup Classic, the #RJhorseracing handicappers searched out lesser stakes races on the cards that offer potentially better rewards: The $200,000 Pilgrim Stakes at Belmont, a 1 1/16th mile turf race for 2-year-olds, and the $75,000 Unzip Me Stakes at Santa Anita, a 5½-furlong turf dash for 3-year-old filles.

In the former, a Grade 3, the handicapping crew is backing No Word, the 3-1 second choice on the morning line, who steps into stakes company off a convincing maiden special weight score at Saratoga for trainer Todd Pletcher. They have the Chad Brown-trained 5-2 favorite Structor in second and Famished (6-1) to show.

I agree that No Word is the horse to beat, but I’ll try with Our Country (4-1), who was not happy when she stumbled at the break and then got pinned inside in the With Anticipation Stakes (Gr. 3) last month at Saratoga. I’m betting she’ll feel more comfortable drawn near the outside, and will use No Word to place and Andesite (10-1) to show.

In the Unzip Me, the crowd ’cappers are scattered, indicative of a good betting race. They are narrowly backing Fantasy Heat (8-1), with Stealthediamonds (4-1) to place and Miss Hot Legs (8-1) to show.

On the other hand, I think linemaker Jon White had it right in making class-dropping Apache Princess (3-1) the favorite. The handicapping crew didn’t like Kent Desormeaux abandoning the filly trained by his brother, Keith, to ride Holly Hundy (5-1) but the fact that top rider Flavien Prat takes over alleviates my concerns. I’ll take Don’t Sell (4-1) and Mischiffie (12-1) to fill out the minor placings.