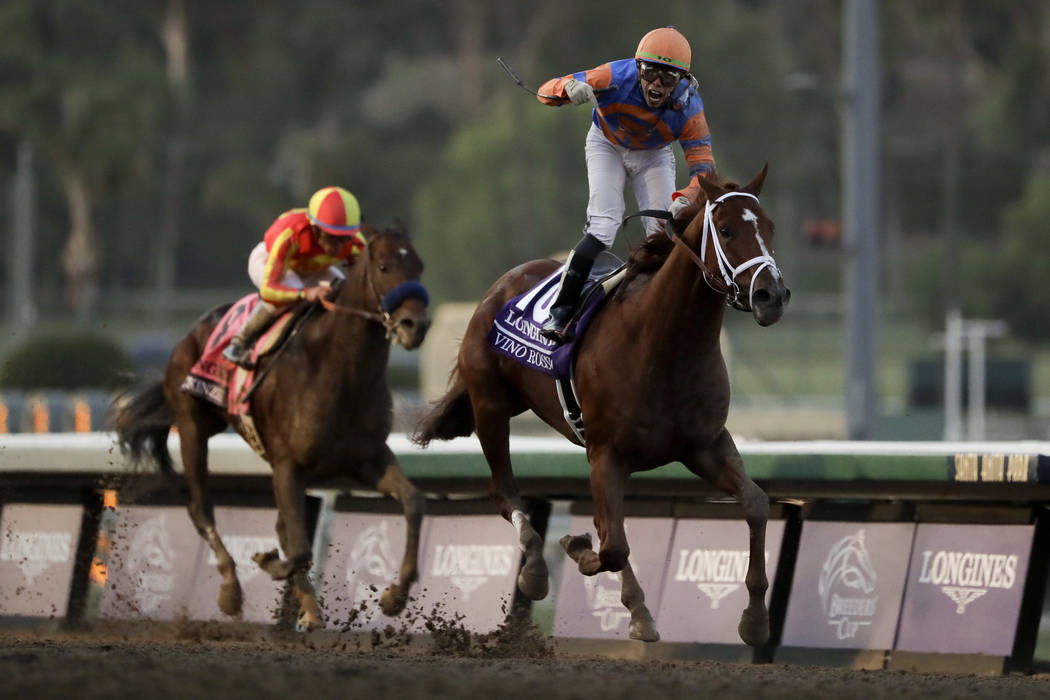 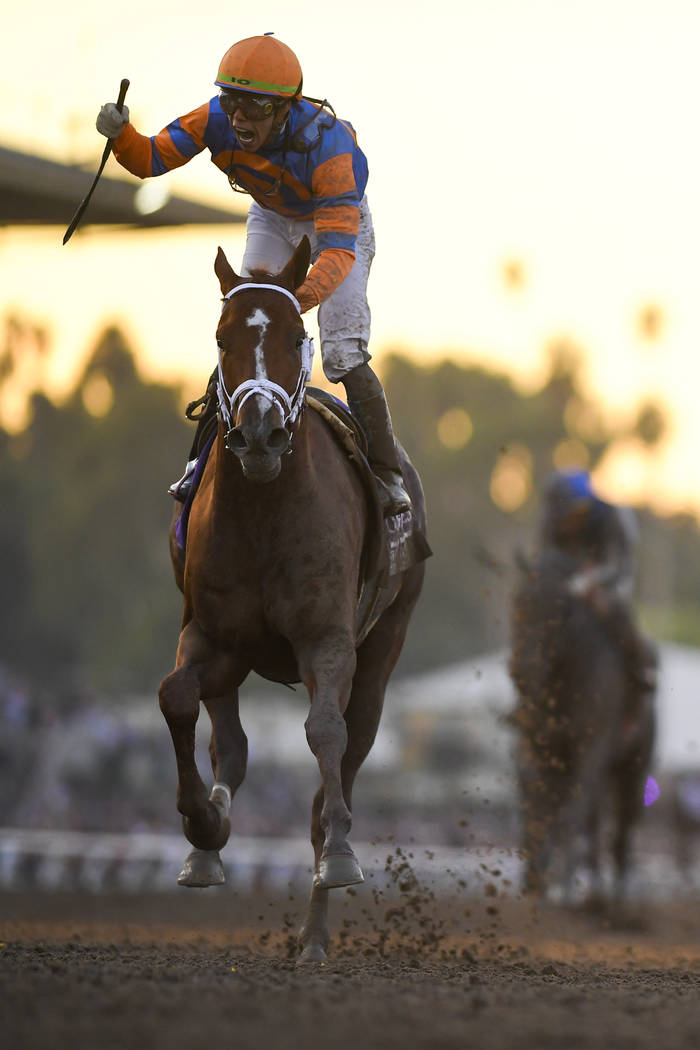 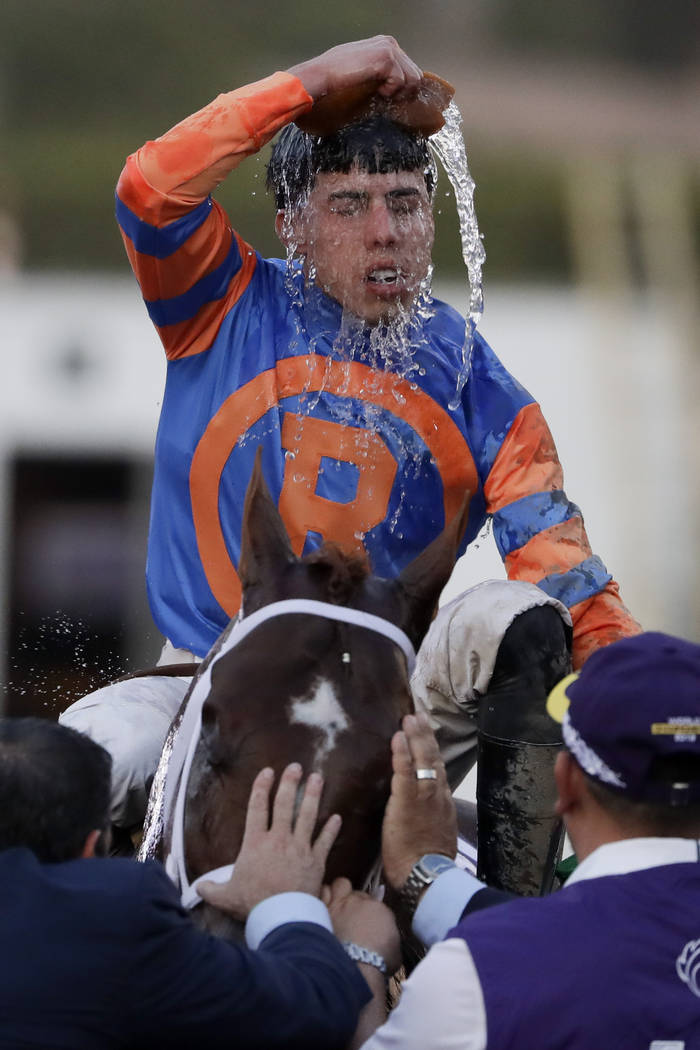 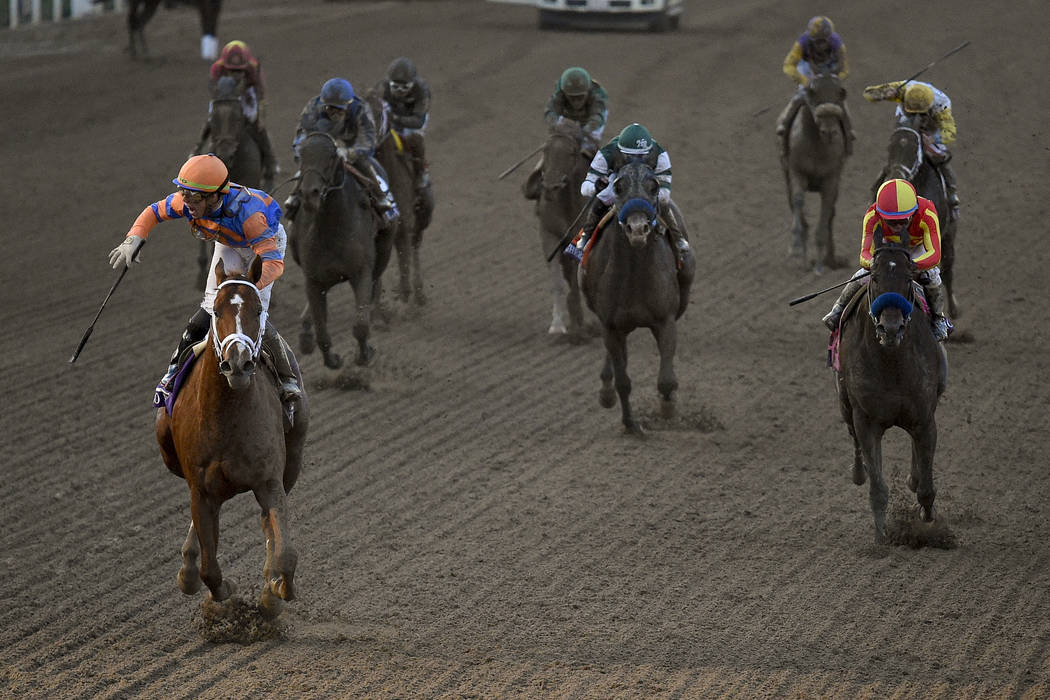 Like a fine wine, Vino Rosso is getting better with age.

The 4-year-old colt uncorked a vintage stretch run to win the $6 million Breeders’ Cup Classic on Saturday, powering past favored McKinzie to draw off by 4¼ lengths in the 1¼-mile race.

Third choice in the betting at 9-2, the Todd Pletcher-trained colt’s victory gave jockey Irad Ortiz Jr. his fourth Breeders’ Cup win this year and ninth overall. It also capped a resurgence that probably will carry the 4-year-old son of Curlin to top older male honors.

But a cloud descended once more on Santa Anita Park in the race, just when it seemed that the track that has been plagued by racehorse deaths this year would emerge from two days in the national spotlight unscathed. Mongolian Groom suffered an injury to his left hind ankle and pulled up in midstretch. Santa Anita announced late Saturday that the 4-year-old gelding had been put down.

“The death of Mongolian Groom is a loss to the entire horse racing community,” Breeders’ Cup Ltd. said in a statement. “Our equine and human athletes’ safety is the Breeders’ Cup’s top priority.

“… Santa Anita has implemented numerous industry-leading reforms to enhance the existing health and safety measures with the intent of providing a safe racing environment. … We are committed to working with our partners in the industry to continue to advance safety reforms, with the well-being of our athletes in mind.”

The accident sadly diverted some attention from Vino Rosso’s strong win, which had owners Repole and St. Elias Stables and their supporters chanting “Vino! Vino!” in the winner’s circle.

Ortiz rode Vino Rosso with confidence, allowing him to settle early and keeping him on the outside and out of trouble. By the time the field had traveled a quarter mile, he was fourth, about 2½ lengths behind early leader War of Will, and right behind McKinzie, the 5-2 favorite.

Vino Rosso began to edge closer rounding the far turn as the Bob Baffert-trained McKinzie kicked past the tiring leaders and briefly drew clear to a roar from the 67,811 souls packed into the grounds. But as he did, Vino Rosso and Ortiz were motoring down the center of the track and closing in with every stride.

After a brief tussle in midstretch, the winner surged away from McKinzie, who hung on to finish second, 4¼ lengths ahead of Owendale. Running time was a solid 2:02.80.

One race earlier, even-money favorite Bricks and Mortar polished off a perfect season with a determined head victory over United (50-1) in the 1½-mile Turf, the second-richest race on the card with a $4 million purse.

The Chad Brown-trained horse rallied from near the rear of the pack to catch United, then gutted out the win in the final yards under a strong ride by — who else? — Ortiz.

The horse has now banked more than $7 million and, with the defeats of Midnight Bisou and Sistercharlie earlier in the day, is the leading candidate for 2019 Horse of the Year honors.

In the other Breeders’ Cup races:

■ Covfefe, a 3-year-old filly named for an errant word in a Donald Trump tweet, got the proceedings going by holding off a determined Bellafina by three-quarters of a length in the Filly & Mare Sprint. The even-money favorite, trained by Brad Cox and ridden by jockey Joel Rosario, won for the sixth time in eight career starts to push her earnings past the $1 million mark.

■ Given a great ride by jockey Javier Castellano, the 6-year-old mare Belvoir Bay (14-1) jetted to the front and crossed over to get close to the rail en route to a 1¼-length victory over Om in the 5½ furlong Turf Sprint. Trainer Peter Miller, who trained the winner and the runner-up, notched his fifth Breeders’ Cup triumph.

■ Spun to Run (9-1) led from the start to capture the Dirt Mile by 2¼ lengths over even-money favorite Omaha Beach. The victory was the first Breeders’ Cup score for trainer Juan Carlos Guerrero.

■ Iridessa (13-1) got Team Europe off the schneid with a game neck victory over local heroine Vasilika in the 1¼-mile Filly & Mare Turf. The win was the first in the Breeders’ Cup for jockey Wayne Lordan and trainer and former jockey Joseph O’Brien, son of legendary Irish trainer Aidan O’Brien. Sistercharlie, the 4-5 favorite, finished 2¼ lengths back in third.

■ Mitole (9-5) wore down favored Shancelot in deep stretch to win the 6-furlong Sprint. Running time was 1:09 flat, a solid clocking for the Steve Asmussen-trained son of Eskendereya, who was ridden by Irad’s brother, Jose, given the new deeper Santa Anita racing surface.

■ Blue Prize knocked off another favorite, rallying from off the pace under Jersey Joe Bravo to turn back Midnight Bisou by 1½ lengths in the 1⅛-mile Distaff. The daughter of Pure Prize was bred in Argentina and gave trainer Ignacio Correas IV, an import from Argentina himself, his first Breeders’ Cup victory.

■ Brown added to his growing collection of Breeders’ Cup trophies, as Uni (7-2) rallied under Rosario to pass 5-2 favorite Got Stormy in the deep stretch to win the Mile. Brown, the dominant U.S. turf trainer, has 15 Breeders’ Cup victories, 13 of them on the turf.