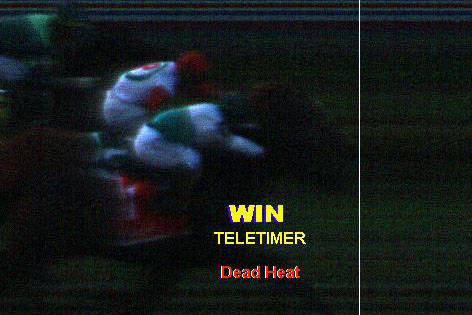 “Dead heats” are a rarity in horse racing, but even rarer is the dead heat that isn’t.

We may have had a sighting of this rare beast at Saratoga last weekend, when some interesting circumstances combined to render the photographic equipment used to decide such tight finishes virtually useless.

We’ll probably never know for sure because of a continuing problem in horse racing: a lack of transparency into stewards’ decisions, an issue that reared its head just a few months ago in the Kentucky Derby.

Here’s how Saturday’s race went down, according to players who were at the track and my repeat viewings of the race:

A heavy rainstorm swept in suddenly during the running of the $200,000 Lake Placid Stakes late Saturday. Things got really tight at the finish of the 1 1/16-mile race for 3-year-old fillies on the inner turf course. Regal Glory, Blowout and 8-5 favorite Varenka were within a few inches of one another at the wire.

Unfortunately, between the heavy rain, the gathering darkness and the fact that the inner turf course at Saratoga isn’t well lit, the normally crisp photo finish camera produced a shot comparable to some of my worst vacation snaps.

The prevailing opinion on the track was that Varenka had won by a head, according to one correspondent, but after a long wait race caller Larry Collmus announced that the race was a dead heat between Varenka and Regal Glory.

The finish line shot was never shown on the Saratoga TV feed, according to the correspondent, though it was posted later on the NYRA.com website per usual. That touched off a big social media controversy over the weekend, as it appeared to show that Varenka got the better of Regal Glory.

After multiple viewings of video of the race, which is far better quality than the photo, I can’t say for sure that the stewards’ call was wrong. I also phoned the New York Racing Association publicity staff to try to find someone to explain what the issue was, but I heard only crickets.

The point is that some acknowledgement or explanation of the issue could have defused the controversy long before conspiracy theories and allegations of NYRA incompetence began ricocheting around the internet.

Also, it wouldn’t be a bad idea to invest in some new lights or camera equipment at the storied track.

As long as we’re focused on Saratoga, the #RJhorseracing handicappers figured we might as well hang around for a little horse race they call the “Midsummer Derby,” also known as the $1.25 million Travers Stakes, the most important race for 3-year-olds that isn’t part of the Triple Crown series. We’re also tackling the 12th race on Saturday’s card, an optional allowance/$40,000 claiming race for New York-bred horses 3 years and older.

In the Travers, run at the classic distance of 1¼ miles, the handicapping crew is lining up behind 5-2 morning line favorite Tacitus, runner-up in the Jim Dandy Stakes at Saratoga in his last start and in the Belmont Stakes before that. They like Mucho Gusto (6-1) and Code of Honor (4-1) to fill out the top three.

Tacitus is a solid racehorse, but I don’t think he’s a cinch here because his late-running style often lands him in trouble. I’ll go with Mucho Gusto on top instead, with Tax (6-1) and Tacitus in the minor placings.

In the 12th, to be run at 5½ furlongs on the turf, the crew is backing Fled, the 9-2 third choice on the morning line, over Ghost Giant (5-1) and Dowse’s Beach, the 5-2 morning line favorite who is currently on the also-eligible list.

I’m going with Discretionary Marq (4-1), who drops back to a level where he’s won before, with Ghost Giant and Fled, in that order.