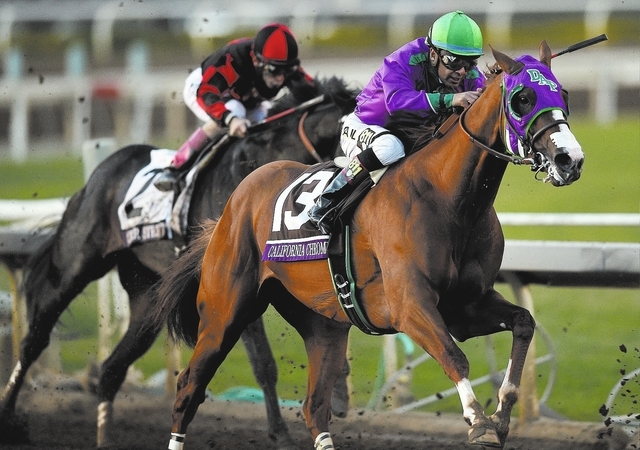 Now that a dazzling duel between Shared Belief and California Chrome in the San Antonio at Santa Anita is in our rear-view mirror, our focus can return to the Kentucky Derby.

The Derby trail will heat up Feb. 21 when the designated races start awarding 50 points to the prep winners. So with one big race, a horse could get enough points to make the Derby field of 20.

In the meantime, horseplayers have tried to mine the Derby winners by betting the first two Kentucky Derby future wagers offered by Churchill Downs. In Las Vegas, bettors can shop for prices at Westgate Las Vegas, William Hill and Wynn Las Vegas.

I never have won a Derby future bet. My best shot was in 2005, when I had the Derby favorite — Bellamy Road — at 300-1 odds. I would have won enough cash to buy a decent car. Instead, Bellamy Road was a speed horse who never got a sniff of the lead and was badly beaten.

The Derby point system has allowed trainers the luxury of taking their time developing their 3-year-olds. Now, if a horse can run one good prep race from Feb. 21 through April 11, trainers can get enough points to make the field with a win or even a placing.

How else can you explain why horses such as Competitive Edge (two starts), J S Bach (two starts) and Khozan (one start) are in Pool 2 and are so highly regarded, yet lack seasoning.

Let’s take Khozan, a half brother to champion Royal Delta. If he had no points entering a final prep such as the Wood Memorial or Blue Grass Stakes, he would earn his way into the Derby with a win or place. So despite a short resume, trainer Todd Pletcher knows he still can roll the dice if he has to.

The late development of many Derby prospects is one reason the “all other horses” was favored in Pool 1 and 2. We are not convinced we have identified the Derby winner yet.

Of the first 23 horses from Pool 1, only 14 made Pool 2 betting. And probably half of those 14 will disappear in Pool 3. The injury toll will increase as trainers tighten the screws on their Derby prospects and others will just fall by the wayside.

HORSEPLAYER WORLD SERIES QUALIFIERS — A one-day qualifier for the Horseplayer World Series will be Monday at The Orleans. Entry fee is $300.

The top five finishers will win a berth into the Horseplayer World Series, valued at $1,000.

Two more one-day qualifiers are scheduled for March 7 and March 15. The Horseplayer World Series will be March 26 to 28 at The Orleans.

MIRAHMADI NEW ANNOUNCER AT MONMOUTH PARK — Frank Mirahmadi has been named the track announcer for the Monmouth Park meet in Oceanport, N.J.

This should finish the announcer domino effect that was set in motion by the retirement of Tom Durkin from the New York Racing Association. Since then, Larry Collmus left Churchill Downs to replace Durkin; Travis Stone left Monmouth for Churchill Downs; and now Mirahmadi replaces Stone.