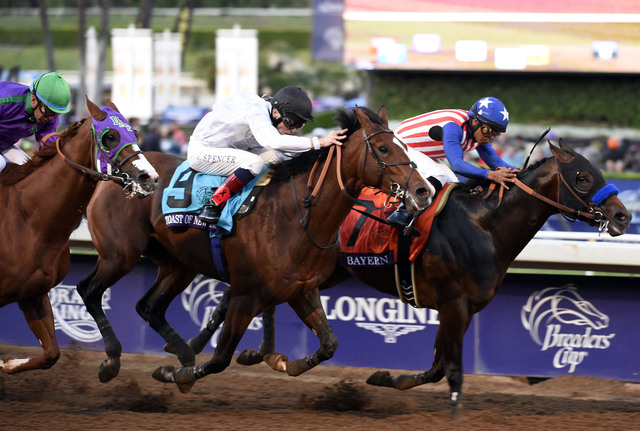 Martin Garcia aboard Bayern leads Jamie Spencer aboard Toast of New York and Victor Espinoza aboard California Chrome to the finish in race twelve during the 2014 Breeders' Cup Championships at Santa Anita Park on Nov. 1, 2014. (Richard Mackson-USA TODAY Sports)

Life is full of instances in which people try to do the right thing but end up with egg on their faces by not thinking things through.

One example happened at the New York Racing Association last month. After a stretch during which 14 horses died in 27 days, the NYRA passed a new rule in which a horse could not run back in 14 days or less from its last start.

I tweeted out that when most trainers run a horse back quickly, it is a sign their horse is doing well and not that a horse is ready to die.

Thankfully, the NYRA just rescinded the rule starting with entries for Thursday.

To see how dumb the new rule was, one only needed to look at the Triple Crown, which the NYRA hosts the third leg of with the Belmont Stakes.

The Kentucky Derby is always run on the first Saturday in May. The second leg is the Preakness at Pimlico 14 days later. Thus, the NYRA rule theoretically would have made all Derby horses ineligible to run in the Preakness.

This is my fourth decade in horse racing. The most amazing feat that I have witnessed was a horse that won two Grade 1 races in less than a week, Conquistador Cielo.

In 1982, Conquistador Cielo won the Met Mile in track-record time on Memorial Day, a Monday. Hall of Fame trainer Woody Stephens then wheeled the colt right back in the Belmont Stakes on that Saturday. He won that race by 14 lengths in the slop.

I would have paid to hear an exchange between Stephens and NYRA officials that he could not enter Conquistador Cielo because of the 14-day rule.

Horse safety always should be a priority. But there are enough rules in place to scratch a horse.

At any racetrack in the United States, there is a pre-race examination in the morning. It usually is a rubber-stamp job done by state veterinarians. If the NYRA was truly worried about breakdowns, then hold your own vets accountable to do a better job.

Another stage is the warm-ups before each race in the afternoon. Vets watch closely for any signs of discomfort. The jockeys have the right to point things out to them if the horse doesn’t feel right.

The jockey is a key element in this equation because if a horse goes down, so does the rider.

The 14-day rule had good intentions but was woefully thought out.

A similar act in Southern California was an expensive lesson for the racing industry. Synthetic surfaces were mandated after a particularly gruesome summer meet at Del Mar. The intentions were good, but now only a pricey asterisk remains on the record books.

A solution to a problem requires research and common sense rather than some knee-jerk reaction.

■ BREEDERS’ CUP TICKETS GO ON SALE WEDNESDAY — The Breeders’ Cup, scheduled for Oct. 30 and 31, will be run at a special venue, Keeneland in Lexington, Ky., a smaller venue with limited seating. If you want to attend, you need to act Wednesday because all tickets will be sold in advance.