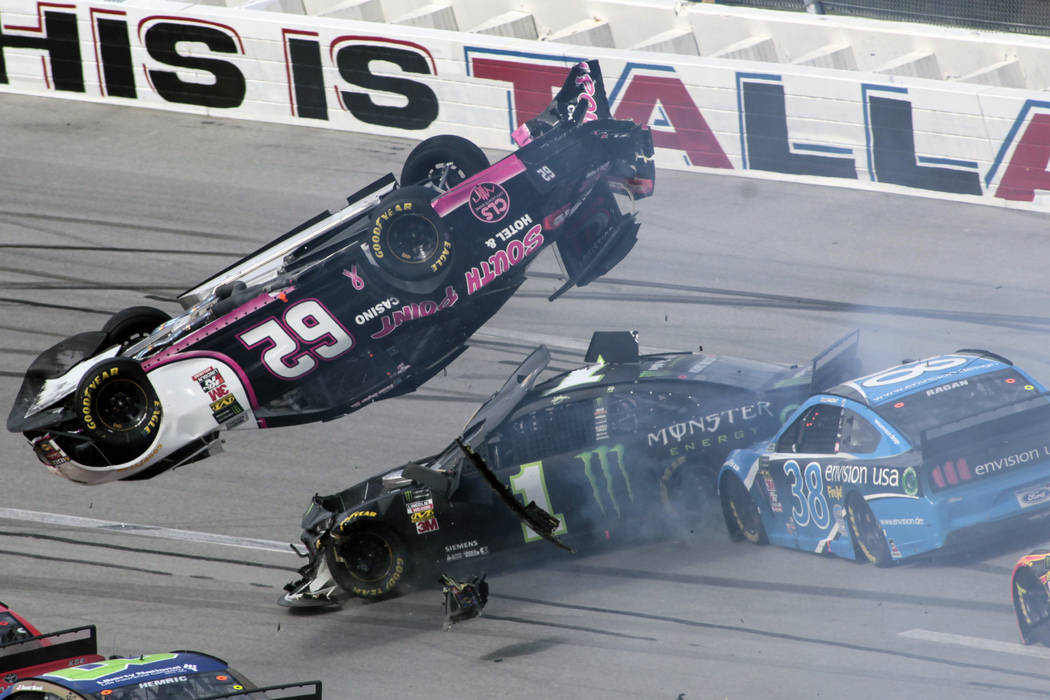 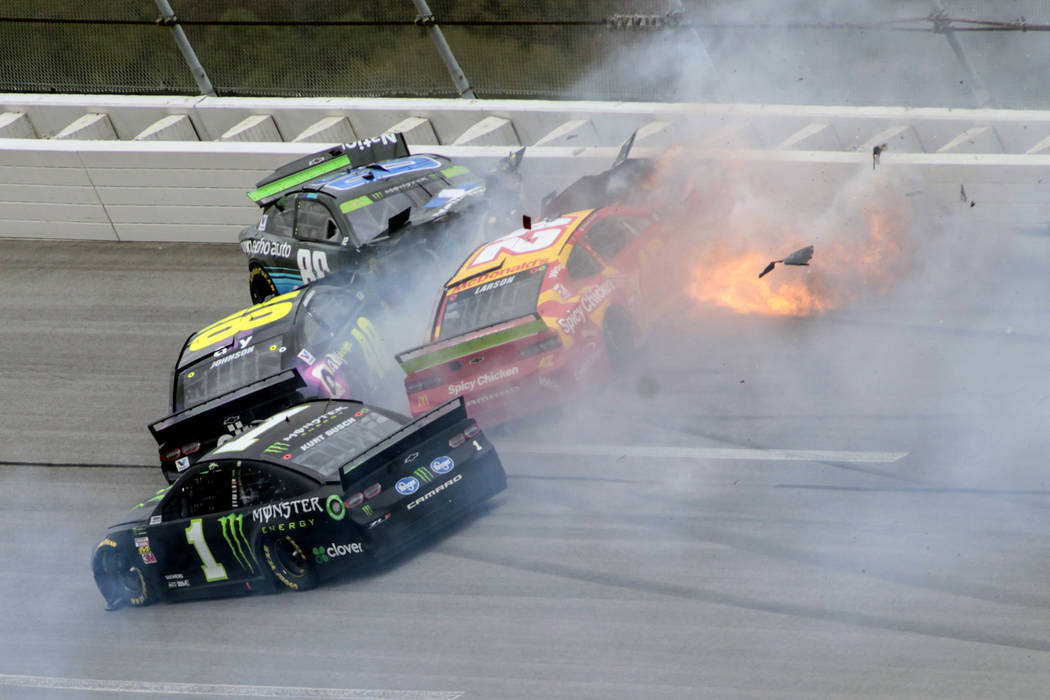 It took nearly 26 hours and 182 laps for Brendan Gaughan of Las Vegas to take the lead in the rain-delayed NASCAR playoff race in Alabama that concluded Monday.

A part-time driver in a part-time ride. In the lead. At Talladega Superspeedway.

For a nanosecond, anyway.

It sounded like a service for four getting caught in the garbage disposal.

Gaughan’s car flipped in the demilitarized zone above the track.

“THE 62 IS UPSIDE DOWN!” shouted NBC’s Rick Allen in the play-by-play booth.

And then it was right side up again. The car landed on its wheels. The physics experts in the NBC broadcast booth were amazed.

Gaughan’s car nevertheless was crushed like an empty beer can.

While race fans held their collective breath, Gaughan began to fidget with his safety harness.

A guy wrote on Twitter that he saw Gaughan at a steakhouse near the track the night before. No big surprise there. Steakhouses are like gaps between cars to Gaughan. He has a knack for finding them.

That’s what people do when fate intervenes in a way that is potentially harmful. They talk about chance meetings the night before with those selected by its fickle finger.

But when the affable Gaughan was released from the infield care center, it was as if he had been tickled by it. He was all smiles. Laughing almost.

“The easiest thing you can do in a race car is go upside down. Nothing hits hard,” the former off-road racer told reporters after going rear spoiler over tea kettle. “I’ve said for a long time I’ve flipped more cars than most people — that’s what we do in the desert. When you flip, you never hit a wall.”

At 44, his best days as a driver supposedly are behind him. You wouldn’t have known it by the way Gaughan drove Sunday and Monday. But his age and the economics of the sport have pushed his career right up to the wall of which he spoke.

He races now only at Daytona and Talladega, where engine horsepower rules reduce the gap between stock car racing’s haves and have-nots. The cars run closer together at the big tracks, enabling experienced drivers such as Gaughan to ride the draft into contending positions.

But with the cars twitching nervously in snarling packs, the potential for a huge wreck — the drivers call it “The Big One” — is multiplied exponentially. There were three Big Ones at Talladega this weekend.

“It’s kind of like bumper cars with your friends that don’t know how to drive at the go-kart track,” former series champion Kevin Harvick said in describing restrictor-plate racing.

But on the days you manage to keep the shiny side up, it can be loads of fun, Gaughan says.

Scary moment in the final laps of the #1000Bulbs500 at @TalladegaSuperS as the 62 car of Brendan Gaughan crashes and does a complete flip. pic.twitter.com/Tri28lX6rw

“We were up front, and we show up what, four times a year?” he said after sticking the landing like Simone Biles off the balance beam. Gaughan made jokes about being docked points by the Russian judge. “People think I’m crazy, but I love racing at Daytona and Talladega.”

After surviving the wreck that eliminated all three Las Vegas drivers in one fell and calamitous swoop — Gaughan was credited with 27th place, Kurt Busch with 28th and Kyle Busch, who was able to keep rolling, with 19th — the son of South Point owner Michael Gaughan would have thanked his sponsors, had he any.

Instead, he acknowledged his race team and the engine builders who help him drive like a bat out of H-E-Double Hockey Sticks on selected Sunday afternoons during the racing season.

There was one other person Gaughan felt the need to address on national television.

“Mother, it’s OK,” he said to family matriarch Paula Gaughan, who, one can assume, warned him about the hazards of running with a stick. Or a stick shift.