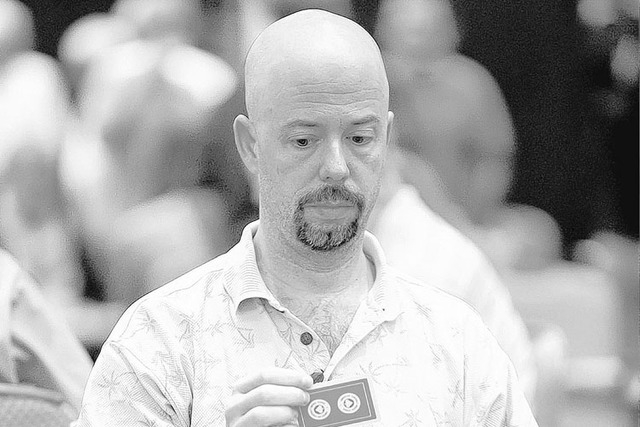 Las Vegan Geoff Hampson is one of the top contract bridge players in the world. (Courtesy)

When most people think of the classic parlor card game bridge, they may conjure an image of Rob and Laura Petrie from the old “The Dick Van Dyke Show.” And of their friends Jerry and Millie.

The commonly held perception is that playing bridge is something young married couples did back when TVs were black and white, before there were soccer fields for kids.

But what if I told you that Bill Gates plays bridge. And his bazillionaire buddy Warren Buffett. And that a few days ago, Bill Gates and his partners beat 48 tables to win their flight in the American Contract Bridge League’s North American Championships at Westgate Las Vegas.

The young woman who handles publicity for the bridge tour told me all of this was absolutely true. She also said, with a certain degree of absolution, don’t even ask about a short interview with Bill Gates.

And, no, Mark Cuban wasn’t in an adjoining ballroom trying to scare up a high-stakes game of Chutes and Ladders.

In 2005, the Richest Man in the World and Warren Buffett, who I believe has slipped to No. 3, put up $1 million of their pocket change to fund a program to teach bridge in schools. The program didn’t take, probably because bridge is sort of an Etch A Sketch game, whereas most kids would rather play Grand Theft Auto or that video game where Super Mario the plumber and his brother jump over stuff.

“Bridge is a game where you can keep improving and feel great about it without ever hitting the limit of what can be done,” Gates wrote in an email to USA Today when he and Buffett were trying to get that school bridge program started.

Bridge is sort of like Windows 8, I guess, only without the blue screen.

Bill Gates said he learned the game from his parents but didn’t really get into contract bridge until Buffett suggested they play. They still play on the Internet, using cryptic nicknames.

The principal bridge website is called Bridge Base Online. It’s based in Las Vegas, managed by a local man named Fred Gitelman. Bill Gates is one of his partners on the project, a payback for Gitelman being Gates’ bridge coach.

One also can play poker online. But whereas poker often is played for huge sums of money, bridge is played mostly for fun, usually by older people, although judging from the turnout at the Westgate, the median age seems to be getting a tad younger.

Top bridge players may have sponsors who mostly pay for the privilege of partnering said top players in tournaments such as the one here.

But nicknames such as “Jesus” and “The Professor” and “Texas Dolly” are rare on the bridge circuit, and ESPN doesn’t show bridge on TV. Not yet, anyway.

“There’s no money at stake,” said Geoff Hampson, 48, one of the top contract bridge players in the world who now makes his home in Las Vegas after being taught the game by his high school biology teacher in Toronto. “People make a living in bridge, but they do not make it out of prize money.”

“I don’t have the headphones and dark glasses. I use bridge to supplement my poker habit,” he said, adding that bridge and poker are related, but only in the manner of distant cousins.

“In bridge, when its two of you against two of them, you have to sort of figure out what’s going through their minds, just like in poker. You have to figure out when your opponents are strong, when they’re weak, when they’re panicky, when they’re confident. But it’s a very small fraction in comparison to what there is in bridge.”

This is why I didn’t believe the bridge people who said they’d have me making four spades contracts and whatnot in a mere six hours’ time, if I only would attend their seminar at the Westgate.

In contract bridge, two pairs of partners sitting across from each other bid on how many tricks they will win. This is the contract. Partners use catchwords as clues to how they plan to play their cards.

There seems to be more strategy than luck; once you get the hang of it at one of those six-hour seminars it also appears to be fun, though not as fun as Super Mario and his brother jumping over stuff. I’m told that playing bridge also keeps the mind sharp. And it goes without saying it’s a great way to socialize and meet the new neighbors.

But every now and again there are disagreements at the bridge table.

This is especially true if playing partners are married to one another.

On Sept. 29, 1929, John and Myrtle Bennett of Kansas City sat down for a friendly game of bridge against their upstairs neighbors the Hofmans. When John failed to make a four-spades contract. Myrtle told her husband he was a “bum bridge player.”

John slapped Myrtle in the face; Myrtle shot John in the back with a .32 Colt automatic. A jury acquitted Myrtle of murder.

The New York Journal wrote that John Bennett should have played another hand.