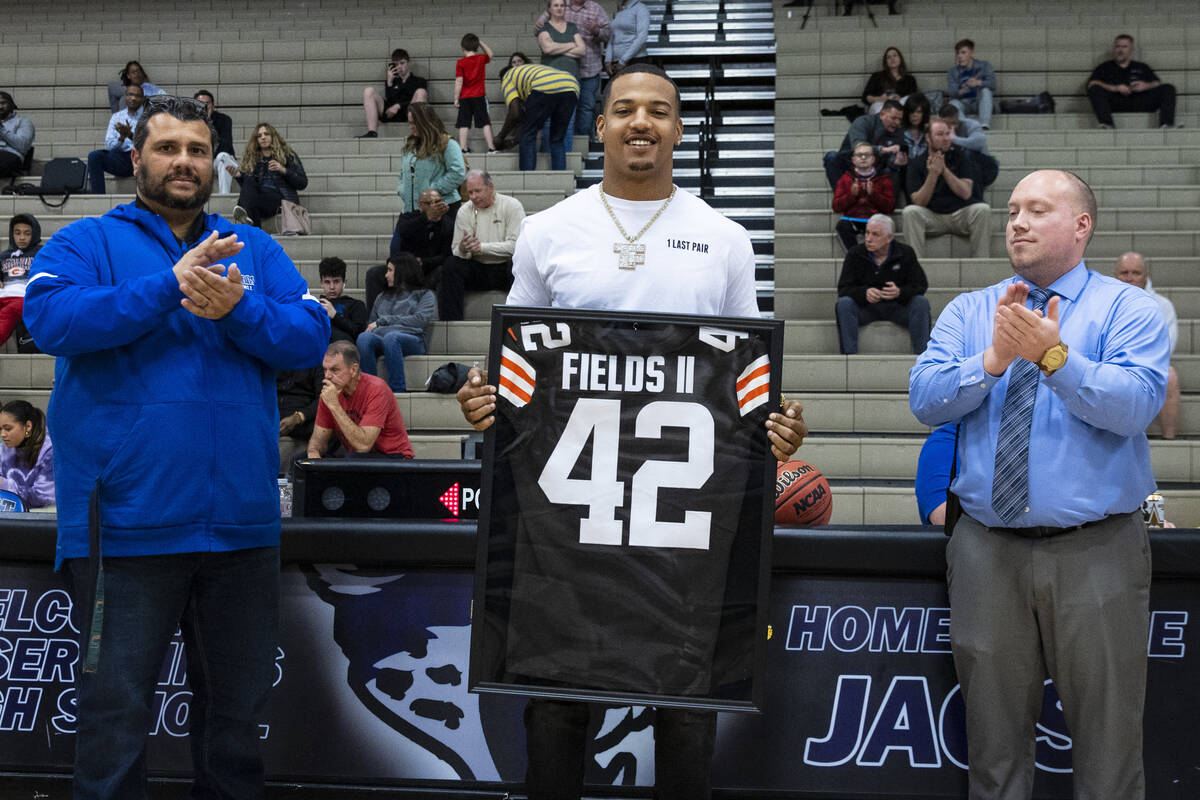 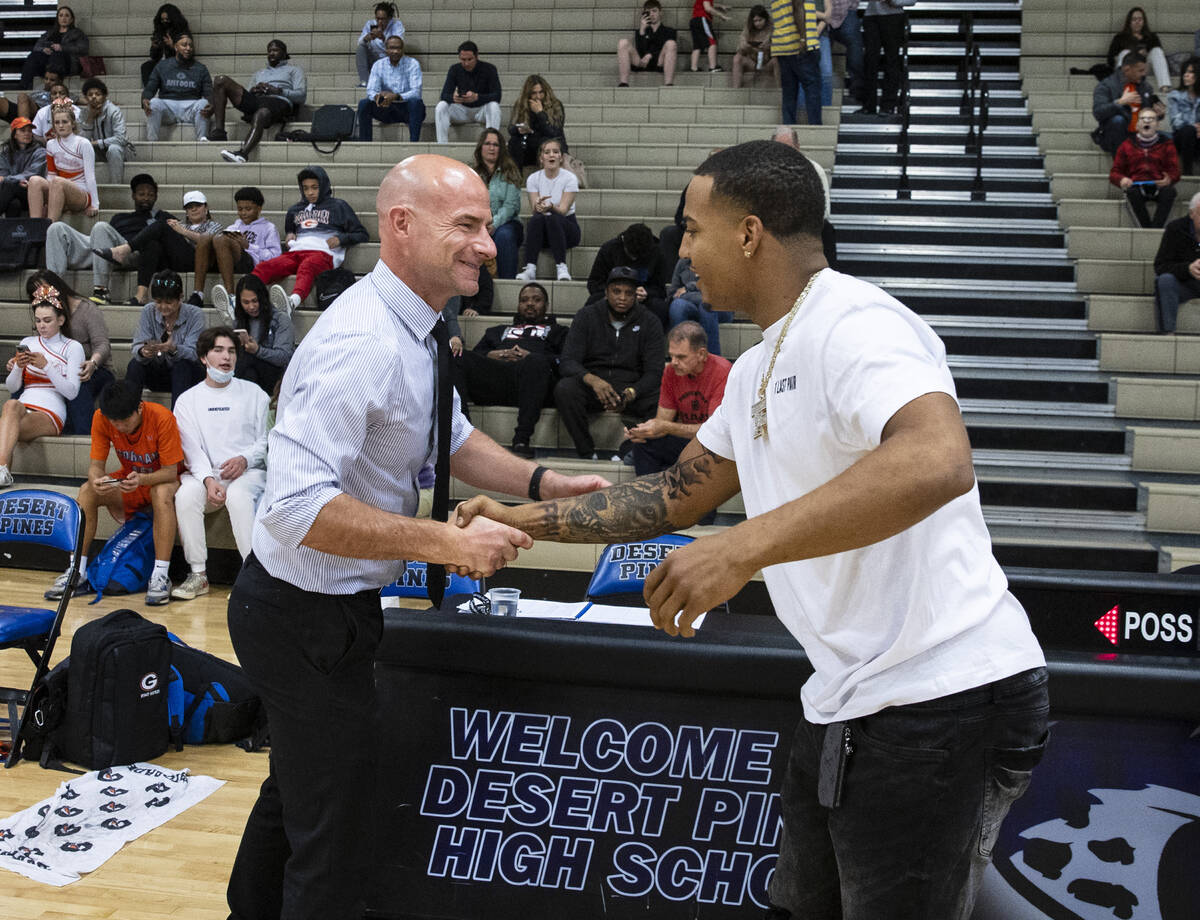 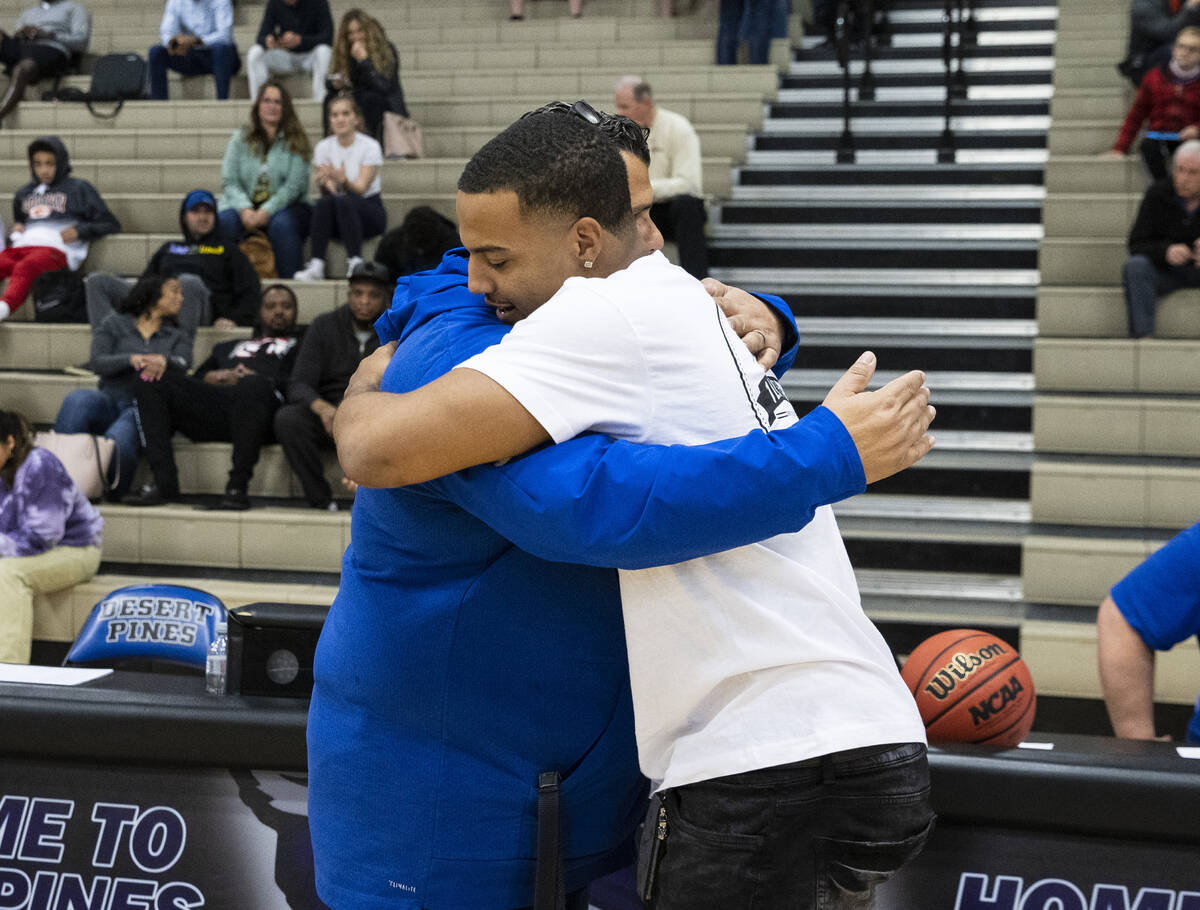 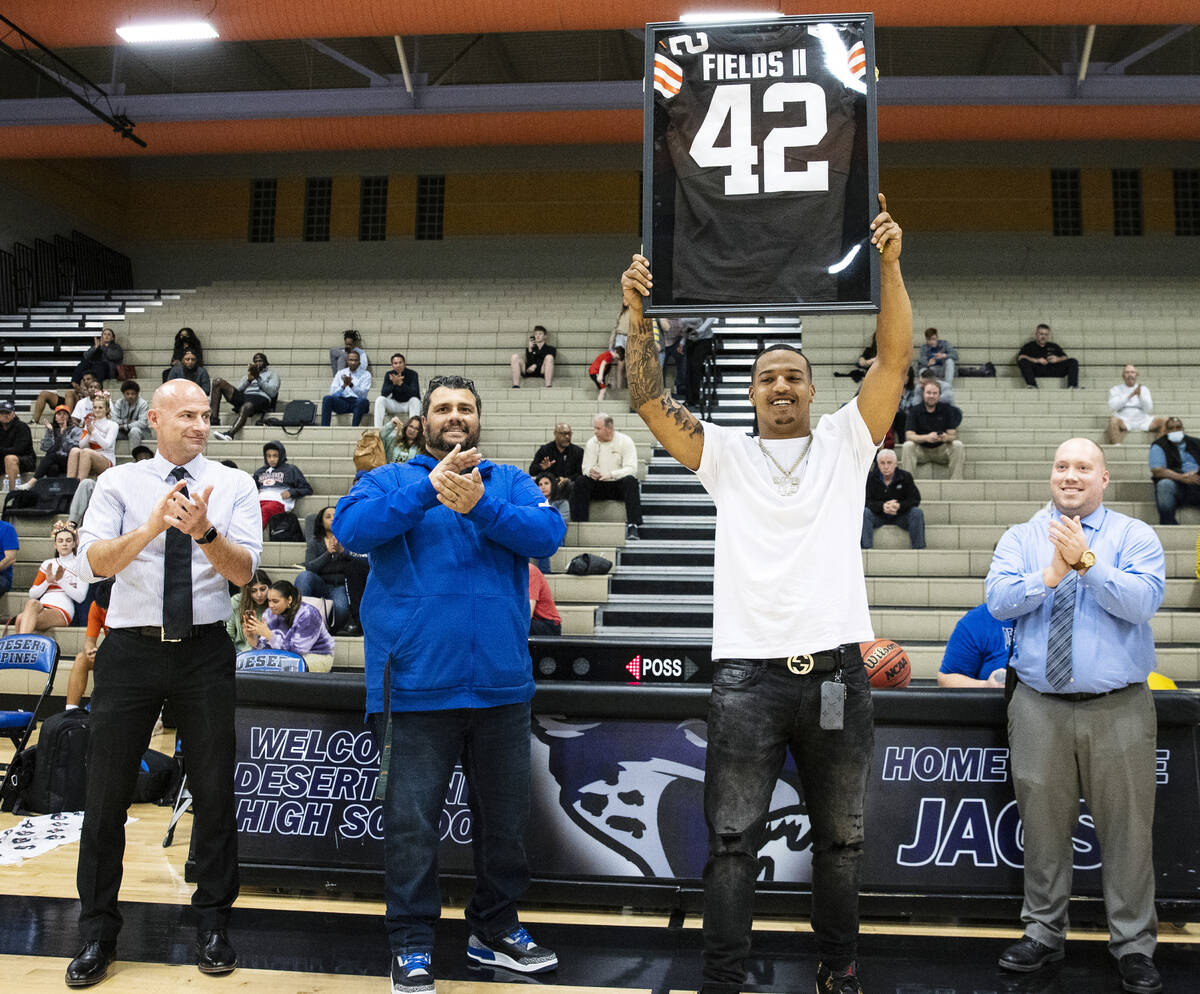 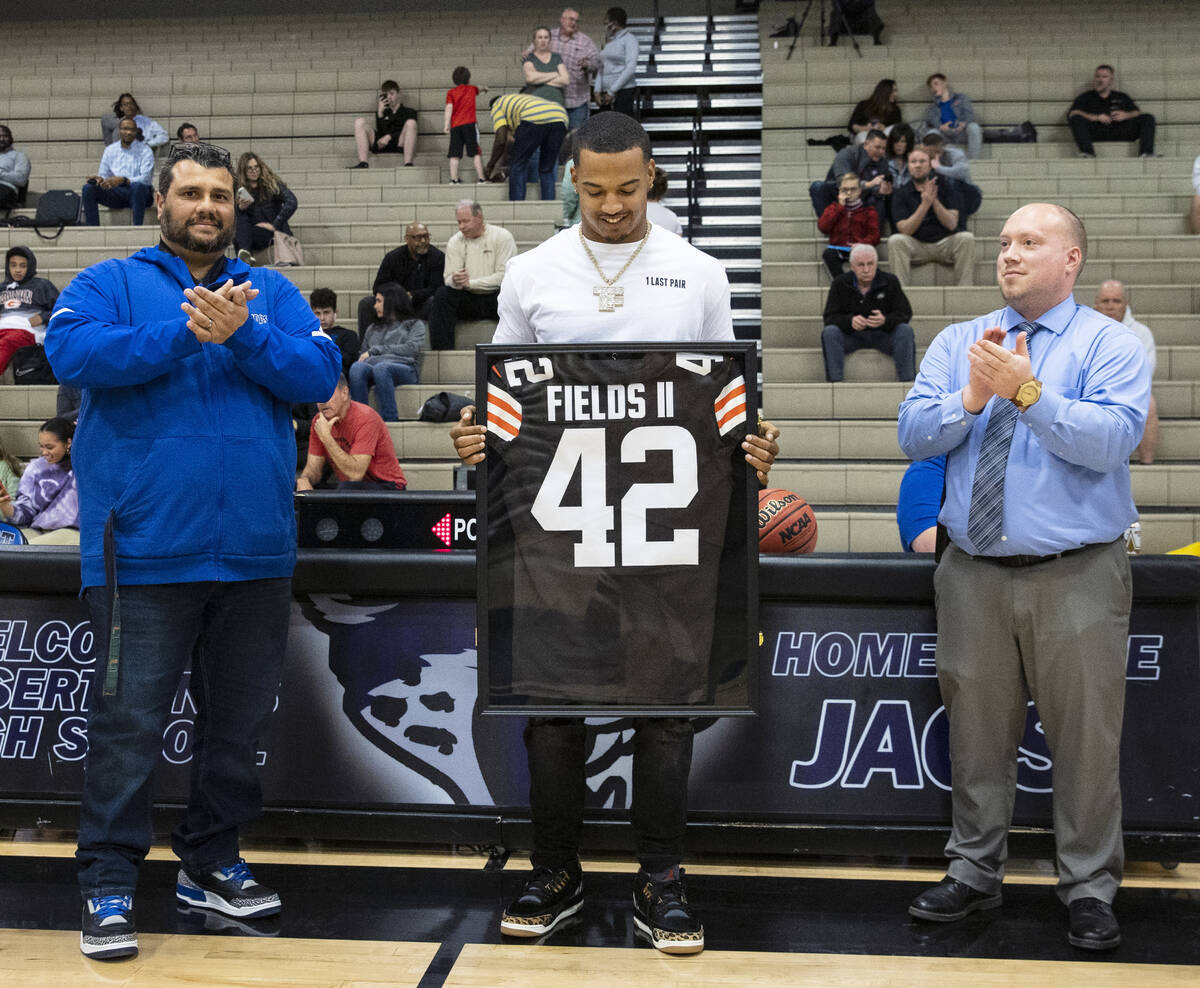 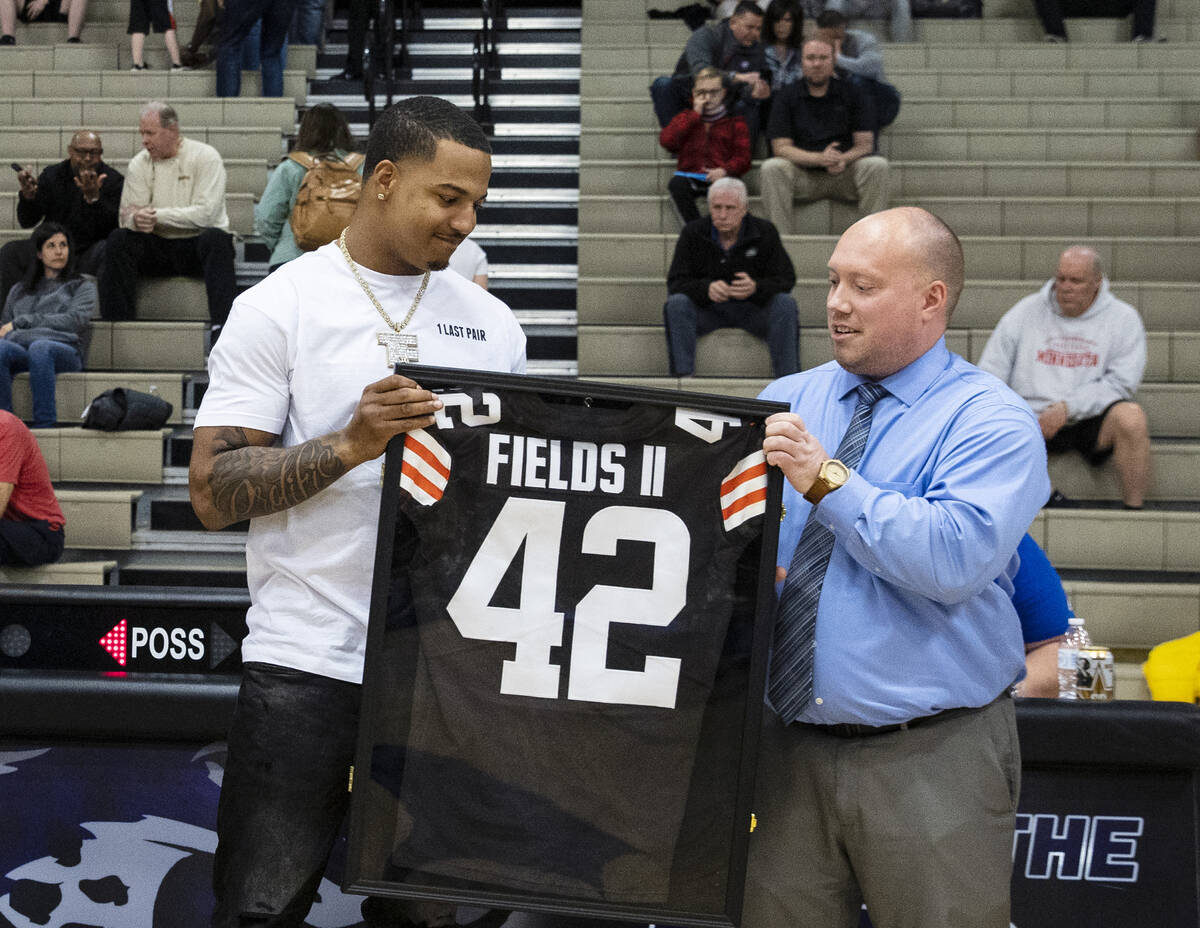 The way Tony Fields II spoke about Desert Pines High before its basketball game against Bishop Gorman on Thursday, you got the impression he would give the Jaguars the shirt off his back.

But at halftime, the school he considers his extended family beat him to it with a jersey presentation to honor his rookie season with the NFL’s Cleveland Browns.

“Growing up in Las Vegas, you didn’t see a lot of players coming out. So that’s always been my dream, my aspiration — to make it to the NFL,” the 22-year-old outside linebacker said. “But I never dreamed of (this), so that’s pretty cool.”

After wearing No. 1 and starring on both sides of the ball for Desert Pines’ 2016 Class 4A state championship team, Fields was a three-year starter at Arizona. He finished his college career at West Virginia when he feared the Pac-12 might cancel its 2020 season because of COVID.

The Browns took him in the fifth round with the 153rd pick of the 2021 NFL Draft. He made the team during training camp and was credited with four tackles as a rookie.

“I put a lot of hard work into it, but I’ve got to thank my coaches and my teammates,” said Fields, who wears No. 42 for the Browns and held his Cleveland jersey aloft at the basketball game. “They were there along the way, as well as my father and my family.”

Fields’ father, also named Tony, played high school football at Green Valley and defensive back at Brigham Young and had his son in shoulder pads almost before he could walk.

After that, his high school coaches, teachers, teammates and others — “My Jag family,” Fields calls his Desert Pines support system — made sure he stayed focused.

“Out of any school I’ve ever been, Desert Pines is like family. We all take care of each other,” he said, calling the 2016 state football championship a memory he’ll never forget.

“I graduated high school early, so I didn’t get to be part of the (2017) state basketball championship. But even then, Coach Mike (Uzan) offered me a ring. Like I said, Desert Pines is like family.”

Though his contribution to the Browns was minimal, “I eventually got onto the field to show what I can do. And next year I plan to get on the field more and show even more what I can do,” said Fields, adding that just running out of the tunnel on an NFL Sunday was the thrill of a lifetime.

“You hear all those fans, and it’s like, this is what I worked for all my life,” he said.

“My first game, I shed a tear. I had finally made it.”

— Friday was the seventh anniversary of Jerry Tarkanian’s death. For those who remember the UNLV basketball program when it didn’t have to offer discounted beer or give away sneakers to attract a crowd, Feb. 11, 2015, is to local sports what Feb. 3, 1959, was to rock ‘n’ roll. It was The Day the Music Died.

— After watching the brand of Nerf hockey played in the NHL All-Star Game at T-Mobile Arena, a reader thought I was joking in mentioning that Gordie Howe once had gotten into a fight at the All-Star Game. It actually happened in 1948. Mr. Hockey was 20 when he and Maple Leafs defenseman Gus Mortson dropped the gloves, with both receiving five-minute majors.

Love this: 70 years ago yesterday, Gordie Howe played in his first NHL all-star game, and got into a fight with Gus Mortson. It remains the only fight ever at an all-star game.

— Las Vegas hockey fans who didn’t get their fill of Machine Gun Kelly during the second intermission of the All-Star Game might want to tune in to the celebrity game during the NBA’s All-Star weekend. The rapper/rocker will team with the Aces’ Dearica Hamby and others less skilled on a team coached by Bill Walton.

Friday also was the anniversary of 42-1 underdog Buster Douglas shocking the world with a knockout of Mike Tyson in 1990, after which The Mirage failed to pay Douglas bettors for more than an hour after the fight because it didn’t bother paying for the broadcast from Tokyo.

“When the result came in, I didn’t believe it,” said Jimmy Vaccaro, then chief oddsmaker at The Mirage. “We didn’t have Showtime … and I thought it had to be a mistake.”

This Day In 1990: Nelson Mandela gets freed from prison after 27 years, and in America, doesn’t get top billing.

Buster Douglas does the impossible and downs Mike Tyson. pic.twitter.com/pUlGdVbTMK

🥊 Buster Douglas knocked out Mike Tyson as a *𝟰𝟮/𝟭* underdog 32 years ago today.pic.twitter.com/7yWej324zP