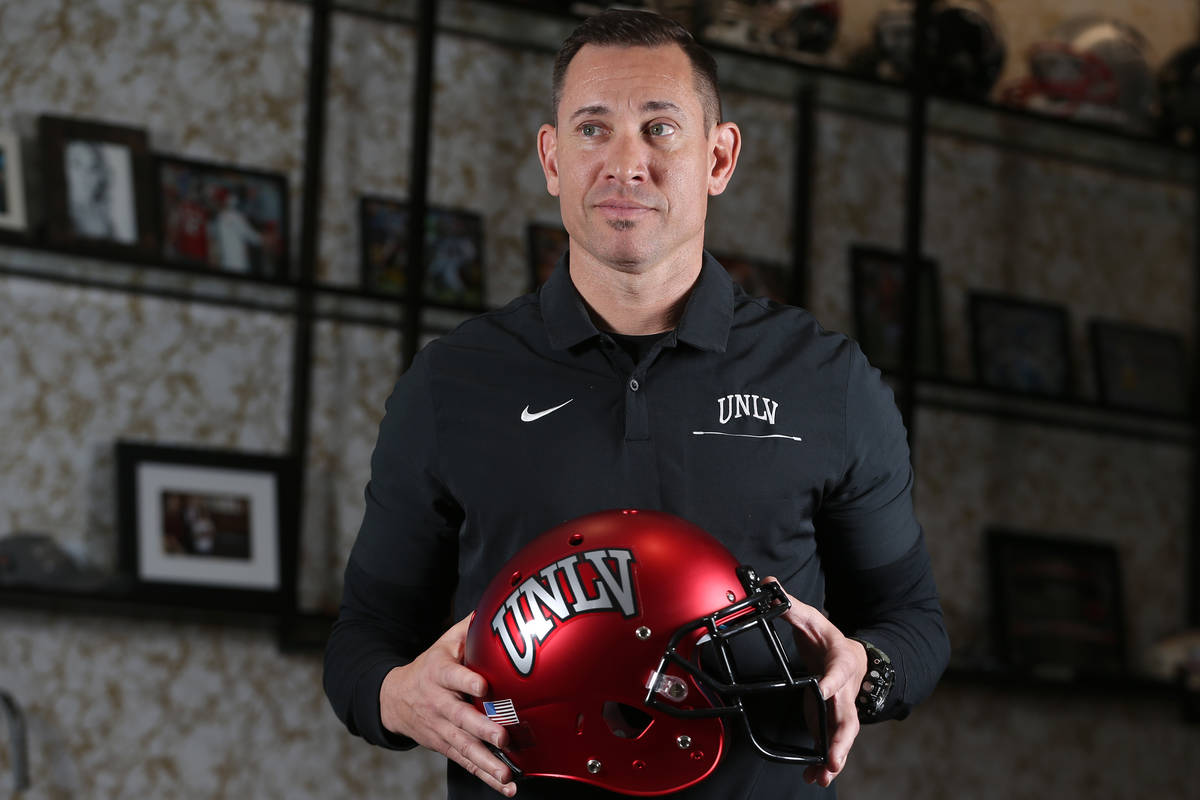 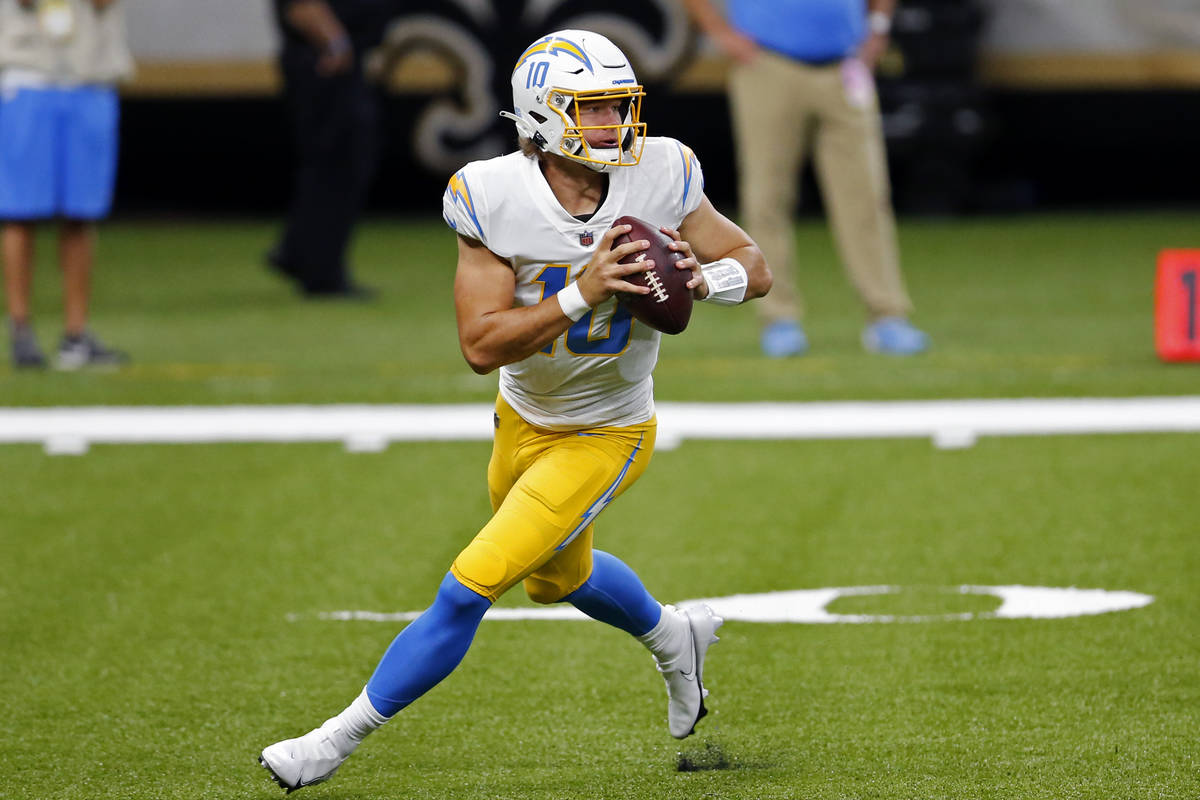 Los Angeles Chargers quarterback Justin Herbert (10) drops back to pass in the first half of an NFL football game against the New Orleans Saints in New Orleans, Monday, Oct. 12, 2020. (AP Photo/Brett Duke)

The first question of what almost certainly will be remembered as UNLV’s strangest college football season was about who was playing quarterback.

The questioner apologized for starting Marcus Arroyo’s first game week news conference as Rebels coach by asking about Justin Herbert, whom he had coached for three seasons as Oregon’s offensive coordinator.

No worries, said Arroyo, who was sporting stylish eyeglass frames and a few days of chin stubble.

Welcome to the Pandemic.

A UNLV season that was supposed to start Aug. 29 against a Pac-12 opponent in a spectacular domed stadium on the Strip instead will begin Oct. 24 in a soccer facility. But if there’s a silver lining to any of this, it’s that we were spared the perfunctory announcement regarding the identity of the Rebels’ starting quarterback.

Arroyo claims not to know who it will be.

“We’ll still work through that all the way through this week,” he said during his Monday video conference.

Ordinarily, that might sound like something a coach would say to keep the media from causing a distraction or giving the opponent something to prepare for. In this case, it also might be true.

“Again, we’re going to find every opportunity (after) four weeks of just having touch football to get these guys in a position to see what we could really evaluate,” Arroyo said of playing football during a health crisis.

So the Rebels have not named a starting quarterback?

“We have not named a starting quarterback,” Arroyo said with only a skosh more voice inflection than Bill Belichick.

Whereas the local ice hockey side will have you believe the Golden Knights have two starting goalies, at least give Arroyo credit for refraining from saying the Rebels have three starting quarterbacks. The depth chart lists Kenyon Oblad or Max Gilliam or Justin Rogers as the starter against San Diego State.

Oblad started seven games last year; Gilliam seven in 2018. Rogers is a transfer from Texas Christian who was once a top recruit.

In responding to a well-crafted follow-up question about who might have the edge, Arroyo said each of the three have begun to show “positive traits.”

So no announcement regarding a starting quarterback. Which probably is just as well, considering the past three seasons it was more or less announced that Armani Rogers was the savior of the long-suffering program, only to see him more or less under perform, get injured and ultimately transfer to the University of Ohio.

Given all that was said and written about Rogers in building expectations that proved unwarranted — and that football is supposed to be a team sport — one sometimes wonders why there aren’t announcements about the identities of the starting offensive tackles, linebackers or defensive backs.

A colleague who knows a lot more about football than I do — he’s from Texas — said it’s because quarterback is the most important position on the field, and that there is only one. To which I pointed out that Baltimore won the Super Bowl with Trent Dilfer under center, and that most plays cannot begin without a center, so he’s important, too.

That spiraled into another conversation about how coaches will tell you offense, defense and special teams are equally vital, yet they mostly assign back-ups, walk-ons and the coach’s nephew to special teams.

But if you’re asking how the Rebels will do against San Diego State Saturday, about all I can tell you is that they are adhering to virus protocols, according to their coach, and will be playing their first game in a stadium renamed for the fifth-largest hospital system in the nation — which in 2020, seems wholly appropriate.

And that unlike the circumstances surrounding his debut as Rebels coach, Marcus Arroyo says Justin Herbert’s performance with the Chargers comes as no surprise.