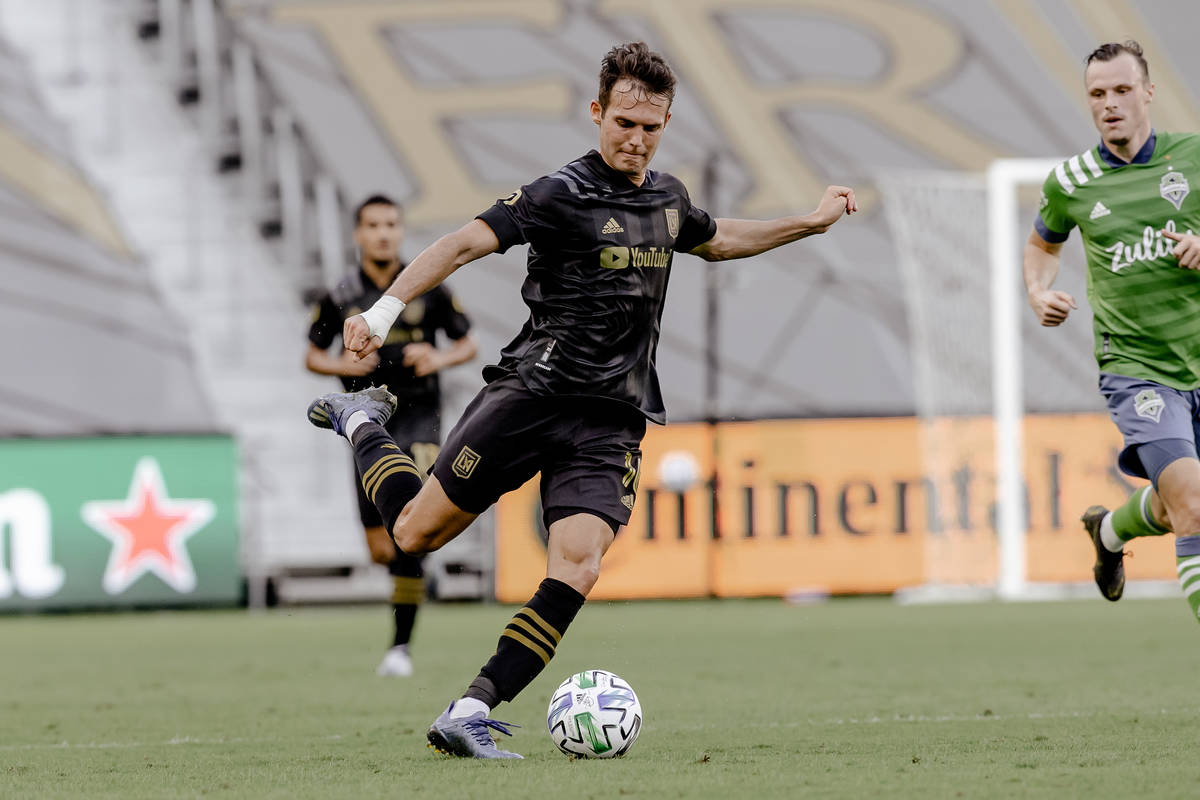 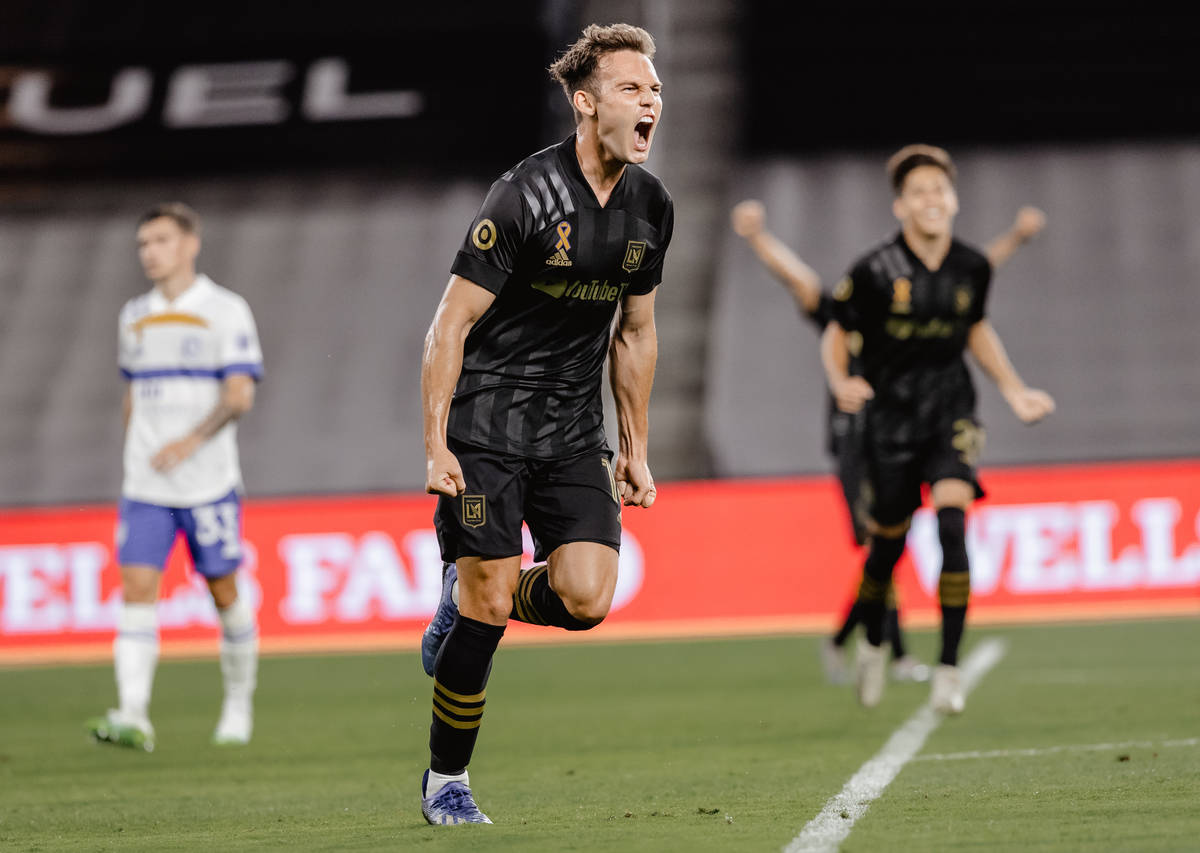 He has reached the highest level of domestic professional soccer. But for 90 minutes (plus injury time) in a recent game, it might have seemed to Danny Musovski that it was 2017 again and he was still playing against Incarnate Word or Grand Canyon at Peter Johann Memorial Field.

The former UNLV star had a breakout game for Los Angeles FC on Oct. 11, scoring two goals and adding an assist in a 3-1 victory over the reigning Major League Soccer champion Seattle Sounders en route to being named the league’s player of the week.

“It’s always good to get recognition like that,” said the former Liberty High star, who scored 88 goals in 47 games for Rich Ryerson’s UNLV team from 2014 to 2017 and was nominated for the Hermann Trophy, the college soccer Heisman. “I’ve been enjoying what I’m doing so far, and I just want to keep doing that.”

Musovski, 24, has appeared in 12 of LAFC’s 17 matches and scored four goals after being selected 30th overall by the San Jose Earthquakes in the 2018 MLS SuperDraft. He served an apprenticeship with the United Soccer League’s Reno 1868 before signing with LAFC.

It was a bit of a letdown being demoted to the lower level, Musovski said, but it also afforded him a chance to play in front of family and friends in his hometown. He scored his first pro goal in his second appearance in last year’s 1-1 match against Lights FC at Cashman Field.

“That was a pretty special moment. It was a big game at Cashman; there were like 10,000 people there,” said Musovski, one of two former local players making an impact for LAFC — defender Tristan Blackmon, nursing a hamstring injury, is a Bishop Gorman product.

Conversely, Musovski’s biggest game as a pro came in front of tarp-covered grandstands instead of LAFC’s raucous 3252 cheering section, owing to the COVID-19 pandemic.

“If there’s one thing I’m missing from the MLS experience, it’s playing in front of those huge crowds,” he said.

Great free kick delivery by Atuesta, and Musovski was left unmarked to head in the opening goal.

Latif Blessing sacrifices his body to challenge for the ball, and then it falls for Musovski to scores his second goal of the game and restore LAFC's 2 goal lead.

Who were the five drivers featured in the “NASCAR in Vegas” category on “Jeopardy” this past week.

The segment was filmed at Las Vegas Motor Speedway during Pennzoil 400 weekend in February, and a LVMS spokesman said a second segment will air on a future show.

Don’t miss @Jeopardy TOMORROW! I will be giving a clue in the "NASCAR in Vegas" category. Check your local listings for stations and show times. pic.twitter.com/7SMxjBVfz4

“Note,” wrote Kornegay on his Twitter account. “This team has moved to a city in Southern Nevada. Thanks.”

Note: This team has moved to a city in Southern Nevada. Thanks pic.twitter.com/1tOnmzIi8W

— Crazy statistic: According to the Knight Commission on Intercollegiate Athletics, the athletic department budgets of NCAA Division I men’s basketball schools range from $4 million to $200 million. This would be roughly similar to the Batavia Muckdogs of the New York-Penn League and the Yankees playing in the same division.

Here's a great story from this summer about the impact a team like the Batavia Muckdogs has on its community. https://t.co/1rGKE2B8vh

— Interesting statistic: RJ hockey writer Dave Schoen wrote stories about Marc Andre-Fleury, Nate Schmidt and Deryk Engelland on the same day that said the first would be staying with the Golden Knights, the second would be leaving and the third would be offered an off-ice job.

These stories were viewed by 8.2, 7.8 and 7 thousand pairs of internet eyes, respectively.

Based on this, one could make the argument there were actually three faces of the franchise before the front office broke up the band.

There’s happy, and there’s “Nate Schmidt happy.” The former employee of Schmidty’s Snacks and Gas is going to give Vancouver his best when his heart heals.

His attitude and talent should do for Canucks’ defence what J.T. Miller did up front. https://t.co/ncYyZ0z7RP

— Everybody has a favorite Nate Schmidt story and, other than the one about him being responsible for sweeping the car wash as a young employee at the Schmidty’s Snacks and Gas convenience store owned by his parents, here’s mine:

When he heard that a fan from Australia had come all the way to Las Vegas (and Los Angeles during the 2018 playoffs) to watch him play, he made a video on my cellphone camera thanking her.

Not many guys at his level would do that.

So because of Nate Schmidt’s kindness and generosity, I still occasionally receive T-shirts that take a long time to arrive in the mail bearing the logos of Australian rules football clubs from his No. 1 fan in Perth.

When you hear Nate Schmidt talk about his time in Vegas, how much he loved Vegas, how much the Golden Knights meant to him, it's almost unfathomable he won't be in that dressing room anymore.

Sports writer Ray Ratto, on A’s “Moneyball” man Billy Beane and his apparent decision to leave baseball behind for his dream job as a European soccer executive:

“He is in his way like Al Davis, a genius who found the liberation of looking for talent in unusual places with unusual temperaments until the rich folks went to the places he used to shop alone.”