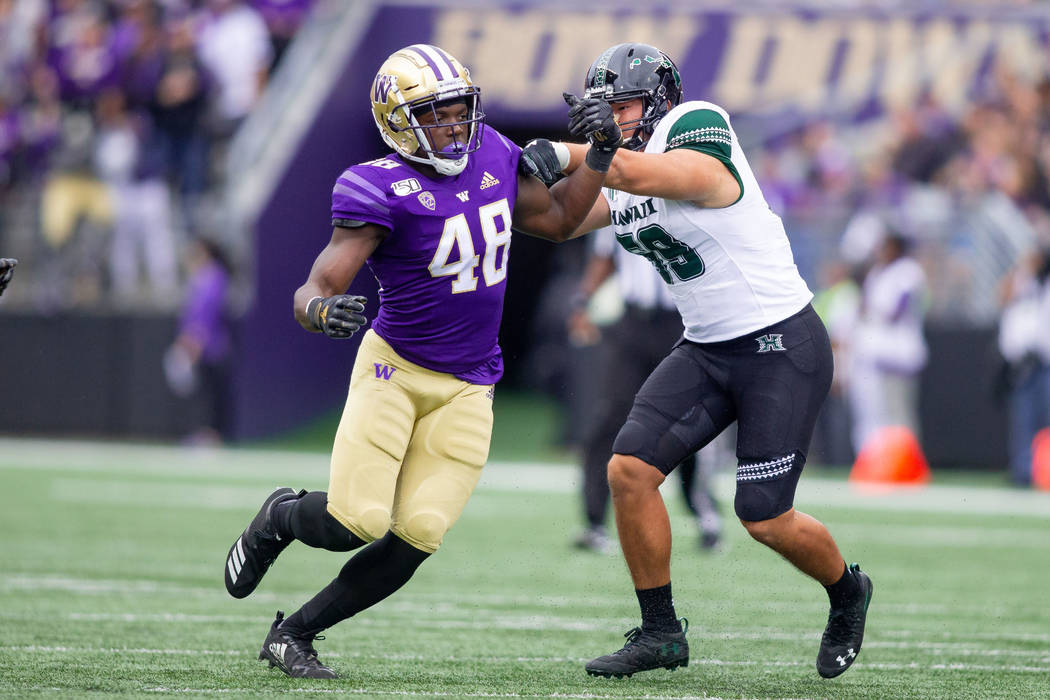 Bishop Gorman graduate Edufuan Ulofoshio, a walk-on at the University of Washington who grew up in Alaska, recently received a football scholarship during a ceremony that was captured on social video. (Scott Eklund/Redbox Pictures)

He grew up in Alaska as a son of Nigerian parents.

He walked on to the football team at Bishop Gorman, walked on again at the University of Washington, started at inside linebacker in the recent Las Vegas Bowl.

Shortly after the game, he was awarded an athletic scholarship.

“It was really the last thing I expected,” he said about receiving free room and board and books and tuition in front of his teammates. And of the viral social media video that followed.

His African surname means “not afraid of war.” He made four tackles in the Huskies’ 38-7 victory against Boise State in the Las Vegas Bowl on Dec. 21 which turned out to be more minor skirmish than war.

After a short Christmas break, new coach Jimmy Lake summoned the Huskies to a meeting. Eddy — what his teammates call him and the Washington broadcasters only wish they could — thought it was about lifting weights during the off-season.

The new coach begin to prattle. Then Eddy heard his nickname called.

The new coach pointed at Eddy.

The other Huskies went crazy. They swarmed Eddy as they had Boise State a few days before Christmas.

“It was awesome,” he said. “I was feeling kind of light when it happened.”

Then he analyzed it more pragmatically. He said he was one of Joyce and Steve Ulofoshio’s five sons, and that if mom and dad had one less college education to pay for, that would ease their financial burden.

With his parents being from Nigeria where sports revolves on the Super Eagles national soccer side, it was natural that was the sport Ulofoshio would first play as a youngster.

After accumulating a collection of yellow and red cards — “for whatever reason I was extremely aggressive,” he said of his short-lived soccer career — Eddy switched to American-style football.

Growing up in Anchorage there was a lot of time to practice, at least during the summer under a midnight sun.

When his parents decided to move to Las Vegas, Eddy wanted to keep playing football.

He had seen the documentary on TV about Snoop Dog and his son, Calvin, who transferred to Bishop Gorman to play football. Though his parents’ home is close to Liberty High School, he wanted to play for Bishop Gorman, too. He said he sort of wandered into the weight room one day and started lifting with the football players, as if he were one of them.

But he wanted to be a Husky.

He had taken an unofficial visit to Washington, whose campus is roughly equidistant from his old home in Alaska and his new one in Las Vegas. The football stadium seemed huge. Ulofoshio thought it he played football at Washington, his family and friends could come to the games.

First he had to make the team.

“I was cocky coming from Bishop Gorman,” he said. “I thought I was at least a three-star recruit.”

Trouble was that Washington had recruited a bunch of five-star ones.

“Some days I wish I had gone to Northern Arizona,” Ulofoshio recalled.

But he was physical. He kept grinding. He kept hitting people. He forced that fumble against Oregon State his freshman year. Later in that same game, he forced another one.

He played in all 13 games as a sophomore, starting the last three. He made nine tackles, was credited with 1 1/2 sacks against Oregon State after coming off the bench. He was Pac-12 defensive player of the week. He had 11 tackles against Colorado, 13 against Washington State.

He played in the Rose Bowl.

He made the Pac-12 academic honor roll.

Then, best of all, Edufuan Ulofoshio heard Jimmy Lake call out his nickname in front of the whole team and award him a scholarship during a meeting he thought was about lifting weights.