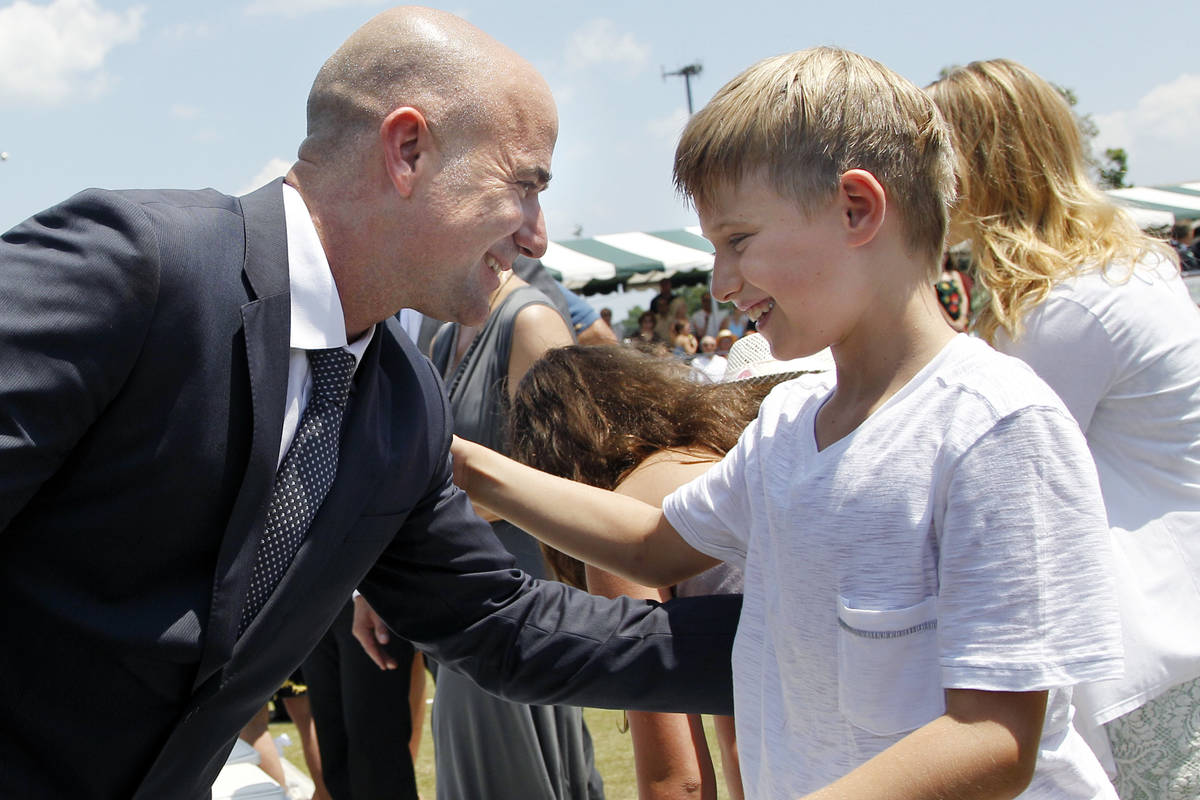 The sons of two of Las Vegas’ most famous sports heroes are featured in videos that went up on social media this week and received mad clicks.

In the first, a bald guy with his back to the camera is shown signaling for a fair catch with a baseball glove on his left hand. A tiny speck of a person can be seen in the distance. A baseball falls out of the sky, and the bald guy snags it almost without moving his glove.

He turns and smiles at the camera as if to say “That’s my boy.”

The bald guy is Andre Agassi, who won eight tennis grand slam titles when he had lots of hair and made female hearts go pitter-patter. The speck is Jaden Agassi, son of Andre and fellow tennis legend Steffi Graf.

Jaden Agassi is much taller than his parents, though you can’t tell it from the speck in the video. He stands 6 feet, 3 inches tall and weighs 215 pounds. He plays third base and pitches, and has signed with the University of Southern California.

“He gets it from his mom,” Andre Agassi wrote in a Twitter post that included the hashtag #MarryUp.

In the other video, a tall, barefoot guy with a trimmed beard is holding a bundle of joy in front of a big-screen television showing a famous game from baseball’s recent past. The tall, barefoot guy is bouncing up and down on slightly bent knees. He’s either trying to rock the bundle of joy to sleep or imitating the batting stance of Chicago Cubs first baseman Anthony Rizzo.

The tall, barefoot guy is Kris Bryant, the Cubs’ third baseman, Rizzo’s buddy and the 2016 National League Most Valuable Player. The bundle of joy is his infant son, Kyler. The guy on TV scoring from first base on a single by Rizzo during Game 7 of the 2016 World Series is also Kris Bryant.

The video was posted on Instagram by Jess Bryant, Kyler Bryant’s mom.

Somebody replied that it was the most precious moment he had ever seen. It can be assumed he was speaking of Kris Bryant bonding with his baby boy, though dad scoring from first on Rizzo’s single was pretty precious, too, at least if you’re a Cubs fan.

Kris Bryant is showing his new born son game seven of the 2016 World Series when he scored all the way from first base which ultimately helped lead the Cubs to break a 108 year World Series drought.

Seeing Kris Bryant happily being a dad is precious. (Via @Jess__bryant IG) pic.twitter.com/YJgzKJfYz1

— Several years ago I got up very early in the morning to sit with former Durango High basketball star Martrel Johnson during one of his kidney dialysis treatments. Martrel had bad kidney and other serious medical issues. He also had buckets of courage. But after 18 years of fighting and nearly as many surgeries, he died May 23, his mom, Cheryl, said in an email.

“My son fought a long, hard battle, but it was time to lay down his sword,” his mother wrote. “He can now rest and be pain free. He was just an amazing son and I will forever hold him deep in my heart.”

There will be a viewing at Heritage Mortuary, 3610 N. Rancho Drive, from 2 to 6 p.m. Friday. Visitors must wear a mask. Due to the pandemic virus, a funeral service on Saturday will be limited to immediate family.

— Update: The four dogs once rescued by late UNLV basketball coach Charlie Spoonhour and wife Vicki, who died this month, have been adopted in pairs — just as the coach and his wife raised them. A caretaker for the Spoonhours said she has been assured by the Hearts Alive Village that good homes also will be found for the couple’s seven cats.

— Kyle Busch, after safely driving his car back to the pits with a flat tire during Thursday night’s NASCAR race at Charlotte, North Carolina, via his Twitter account: “So pumped about my mad driving skills, make it back to the pits on a flat (left rear). I’m the best there is, plain and simple.”

If one didn’t know better, one might believe the Las Vegas Cup Series champion was offering commentary on other drivers spinning out under similar circumstances and purposely bringing out the yellow flag.

So pumped about my mad driving skills making it back to the pits on a flat LR. “I’m the best there is, plain and simple.”

Many social media users seem to like the logo of the AHL’s Henderson Silver Knights that was unveiled this week, but it’s not unanimous.

Wrote Twitter user Jonathan Von Tobel: “It looks like one of those stock images Madden (football video game) would use when you’re starting an expansion franchise.”

Closer look at the details of the design of the Henderson Silver Knights logo. #RevealKnight pic.twitter.com/0A4d6BF7vq