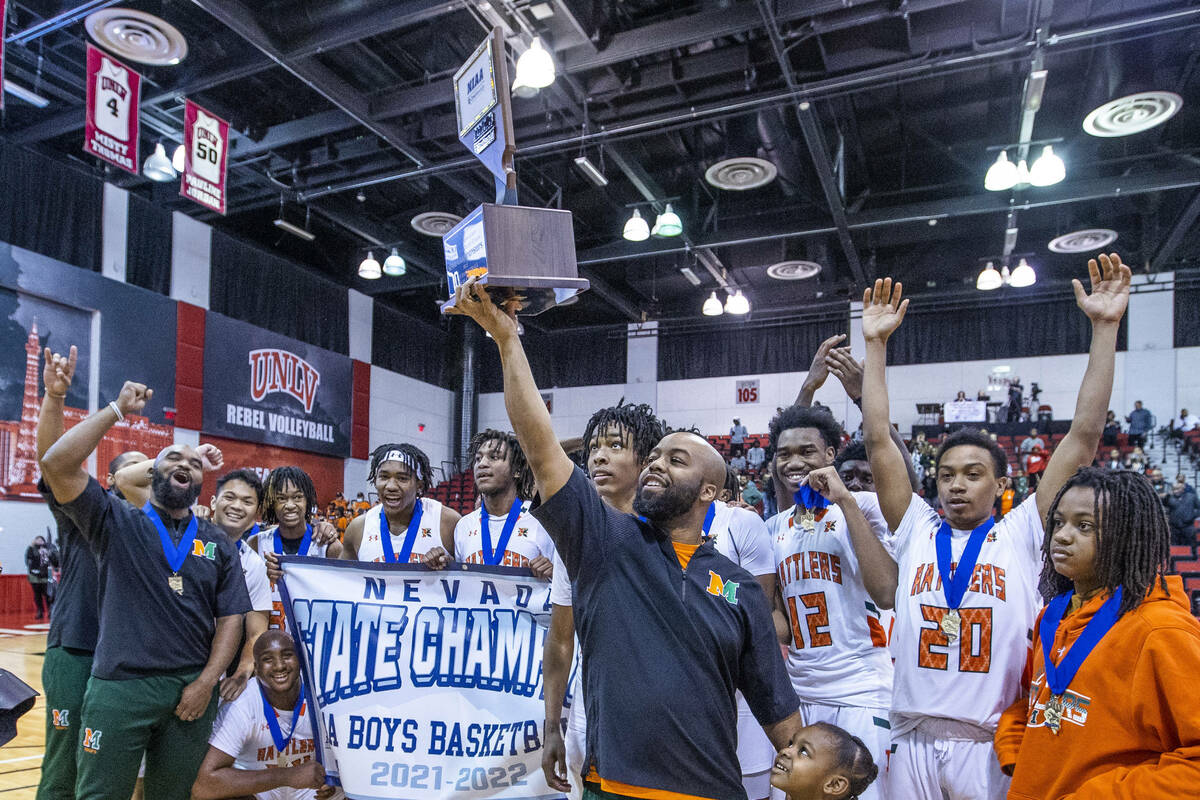 Mojave head coach KeJuan Clark holds the winning trophy as he and players celebrate their win over Spring Valley with a final 64-61 following the second half of the NIAA Class 4A boys basketball state championship game at the Cox Pavilion on Saturday, Feb. 26, 2022, in Las Vegas. (L.E. Baskow/Las Vegas Review-Journal) @Left_Eye_Images 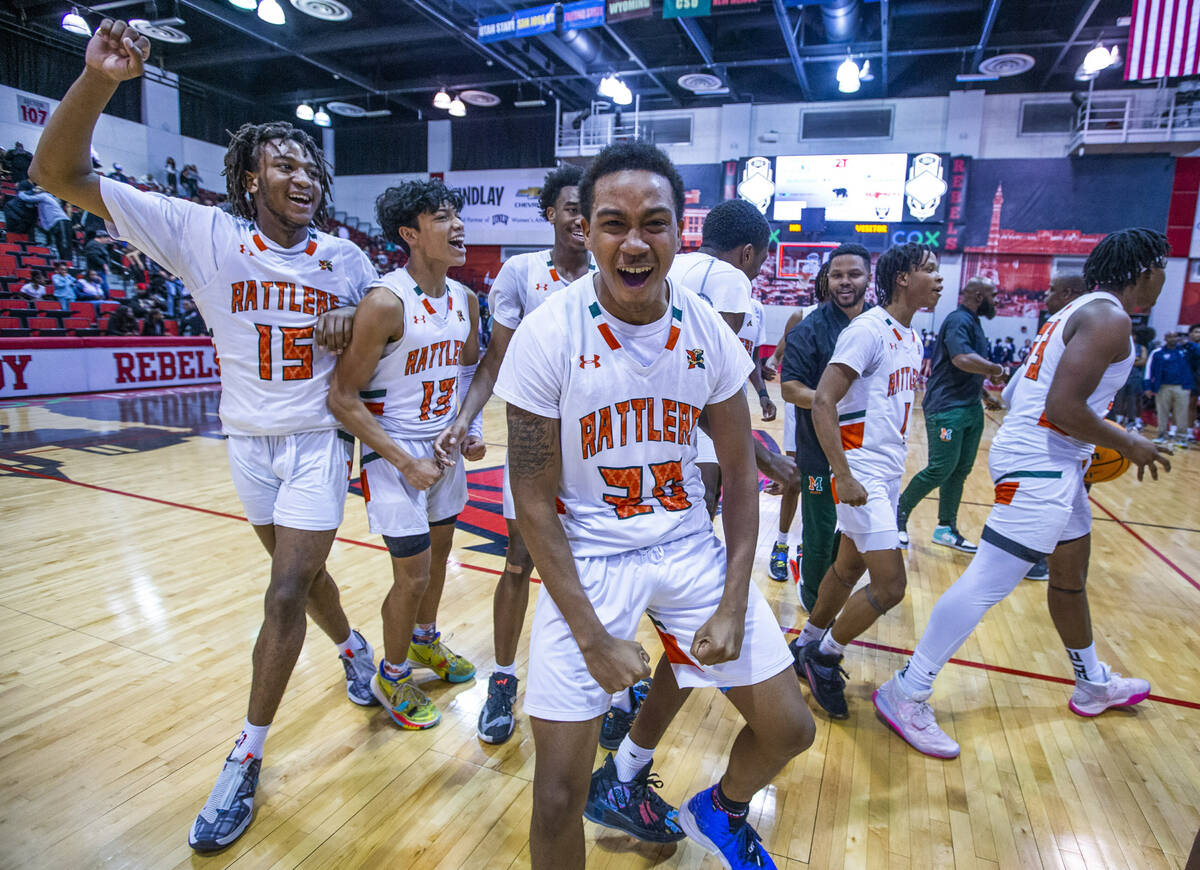 Mojave players celebrate their win over Spring Valley with a final 64-61 following the second half of the NIAA Class 4A boys basketball state championship game at the Cox Pavilion on Saturday, Feb. 26, 2022, in Las Vegas. (L.E. Baskow/Las Vegas Review-Journal) @Left_Eye_Images 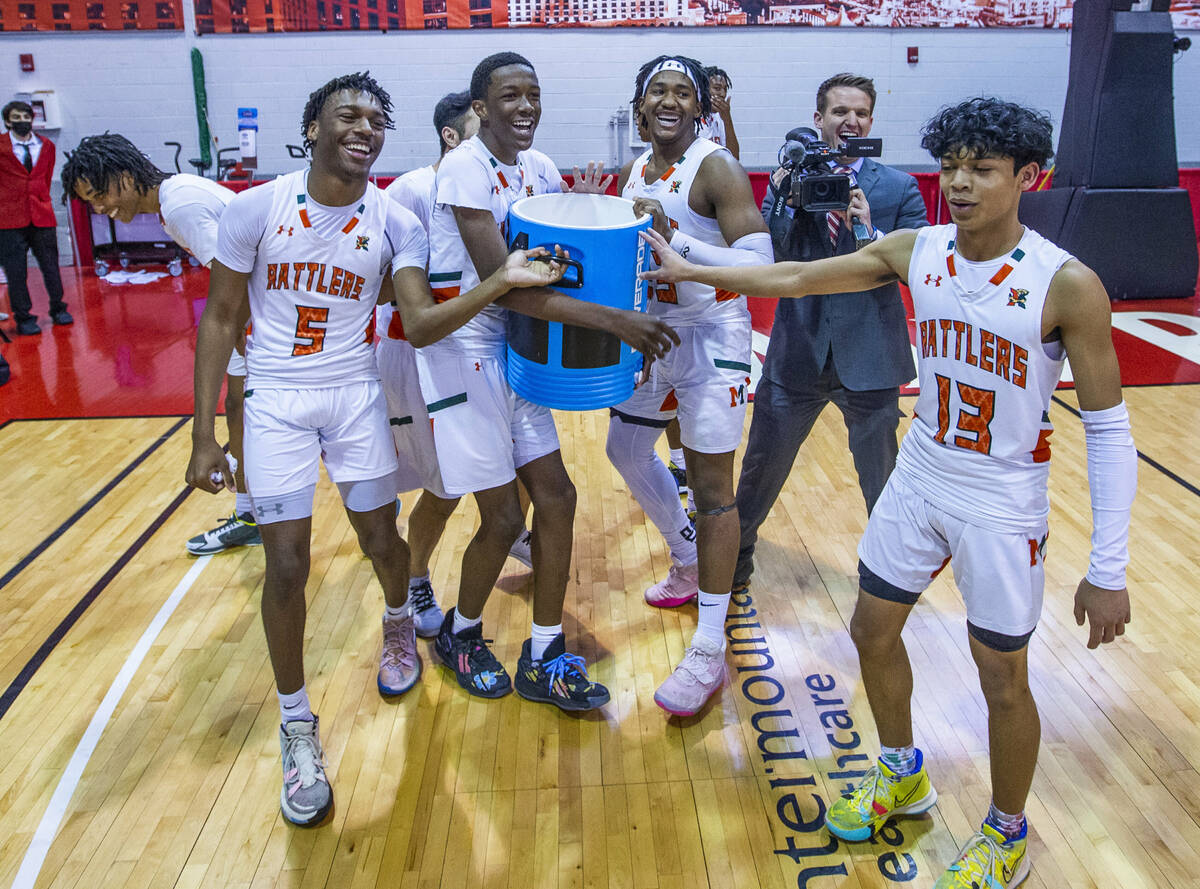 Mojave players pretend to bering over the gatorade as they celebrate their win over Spring Valley with a final 64-61 following the second half of the NIAA Class 4A boys basketball state championship game at the Cox Pavilion on Saturday, Feb. 26, 2022, in Las Vegas. (L.E. Baskow/Las Vegas Review-Journal) @Left_Eye_Images 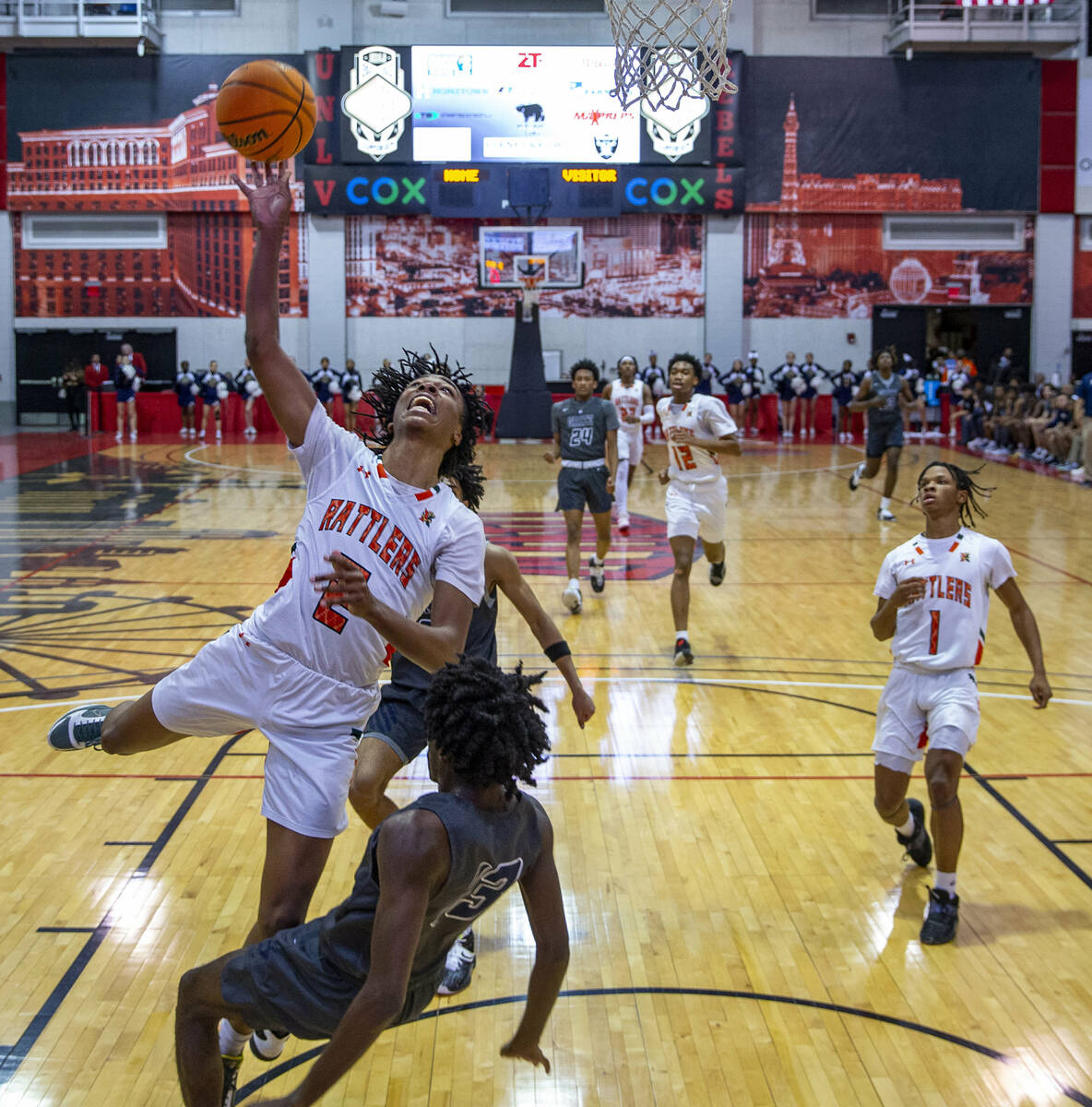 Mojave guard Giali Chapman (2) extends for a shot over Spring Valley’s guard Jordon Cosby (13) during the second half of the NIAA Class 4A boys basketball state championship game at the Cox Pavilion on Saturday, Feb. 26, 2022, in Las Vegas. (L.E. Baskow/Las Vegas Review-Journal) @Left_Eye_Images 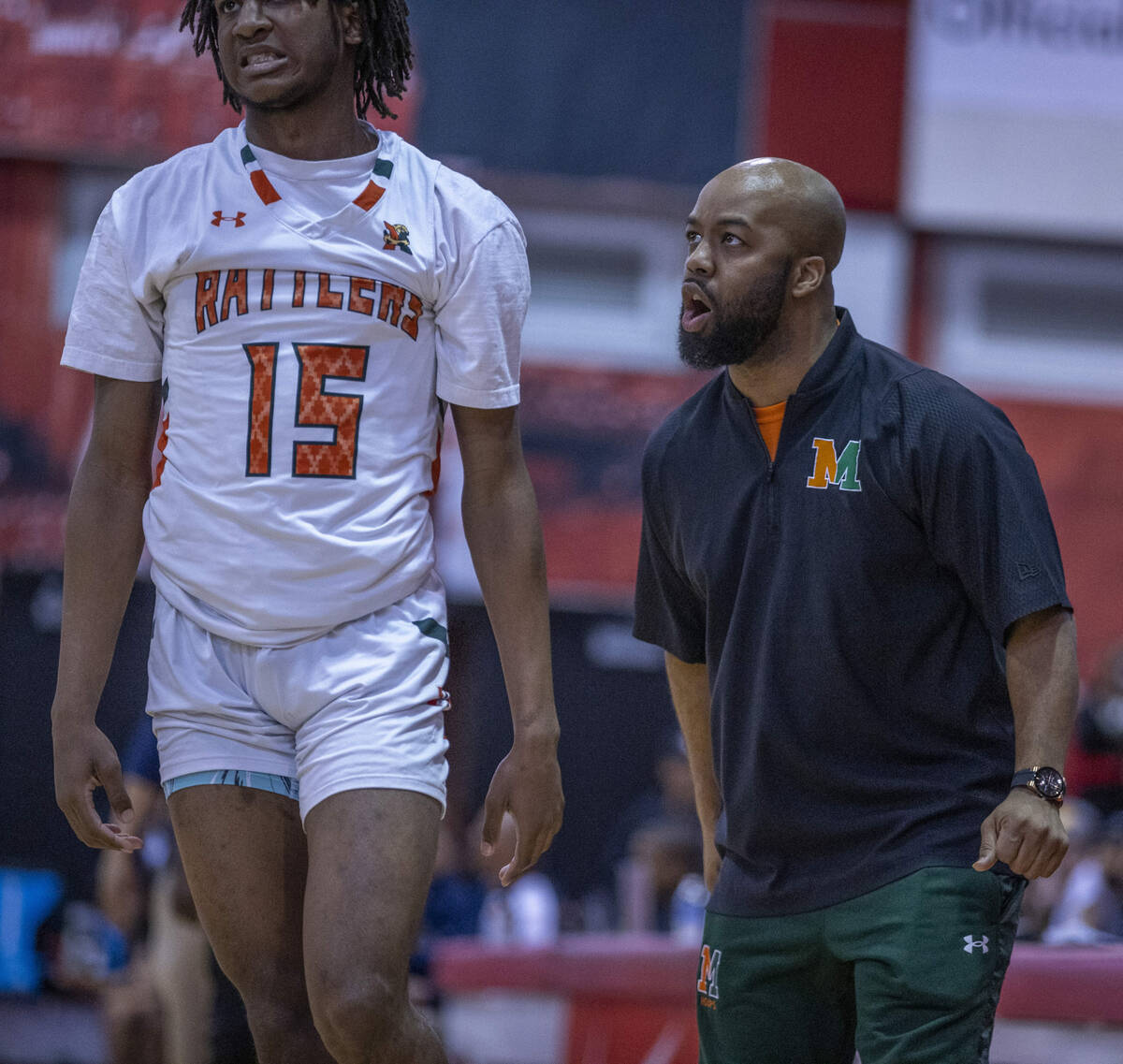 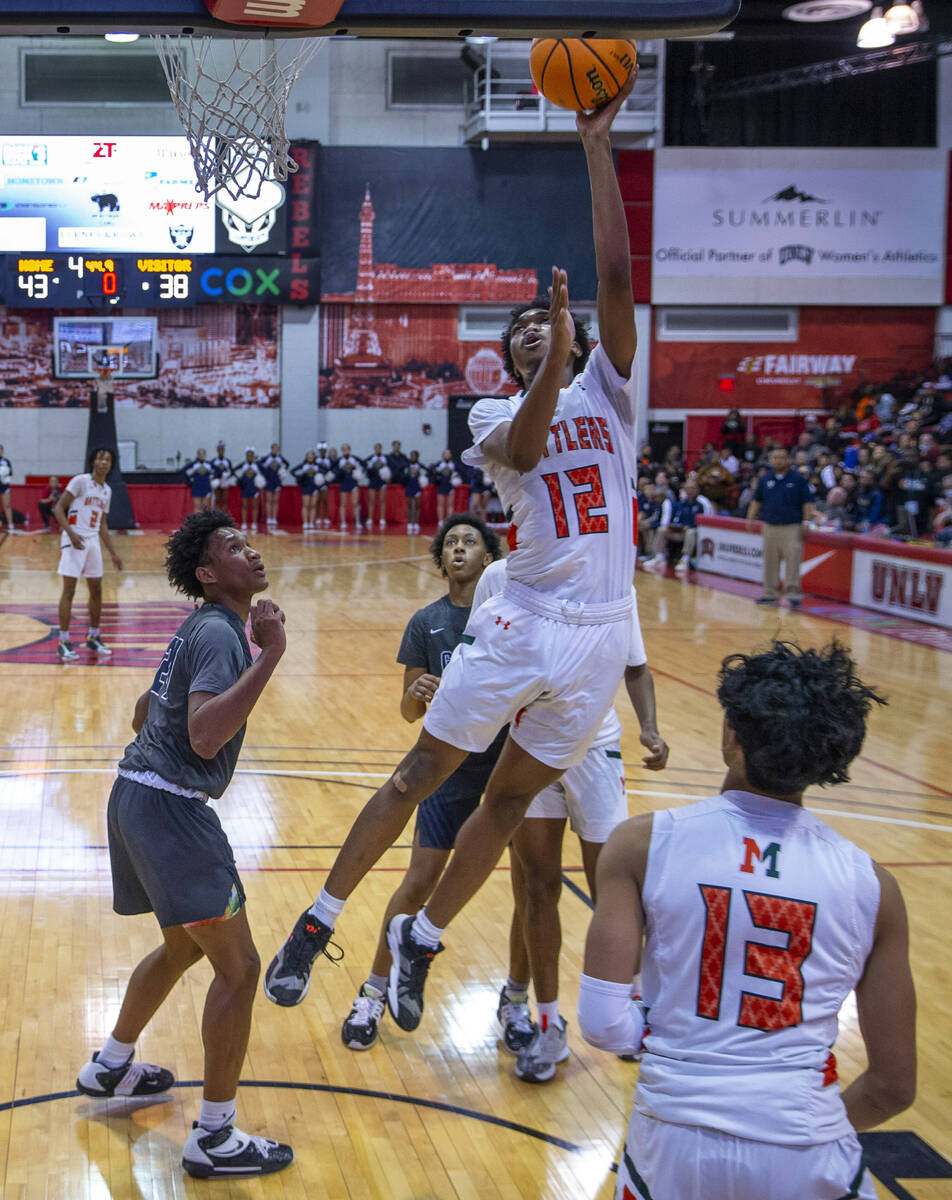 Mojave forward Amaris Quenum-Stewart (12)elevates for a basket over Spring Valley during the second half of the NIAA Class 4A boys basketball state championship game at the Cox Pavilion on Saturday, Feb. 26, 2022, in Las Vegas. (L.E. Baskow/Las Vegas Review-Journal) @Left_Eye_Images

The chameleon that is realignment in Nevada high school sports appears to be changing colors again.

At a Tuesday hearing of coaches and athletic directors, it was confirmed that the Class 5A Northern schools are seeking to drop to 4A as a group. It could lead to 4A again becoming the dominant classification among NIAA schools based on participation and 5A schools in Southern Nevada playing a de facto city championship.

“The Northern representatives did indicate (they) have the desire to go to 4A,” NIAA spokesman Bartt Davis said. “A coach represents his or her team; they don’t represent the school. So we need to hear from the principals” before moving forward.

The earliest that probably could happen is June’s NIAA Board of Control meeting, and the earliest a new realignment would go into effect would be the 2023-24 school year, Davis said, provided the Las Vegas-area members are not opposed to what would be another seismic — if not unexpected — change.

“If the Southern schools were on board, then 5A would become a South-only classification and 4A would be statewide — kind of a flip of where we’re at now,” Davis said.

A flip would be fine with the coach of the recently crowned 4A boys state basketball champions.

“I missed not being able to play North schools this year (during the state tournament),” said Mojave’s KeJuan Clark, who has other reservations regarding realignment.

The Rattlers most likely wouldn’t be playing Northern teams even should they be successful in dropping down. A victim (if that’s the right word) of its recent success, Mojave might be forced to move up to 5A based on sport-by-sport protocols largely based on a performance rubric.

“If I had any say, I would like to stay in 4A and play (selected) 5A schools,” said Clark, whose young team did just that during the recently concluded season. Those schools included Bishop Gorman, which beat Mojave 94-50 — and now you know why Clark would prefer to remain in 4A, public school Liberty’s overtime win over the Gaels’ in the state title game notwithstanding.

Centennial football coach Dustin Forshee said he would rather compete against Northern schools in a larger 5A class, but understands the logic behind wanting to drop down.

“We figured that would happen … and (now) you’re gonna have one division (5A North) that’s not going to have any teams,” Forshee said. “I get it, they don’t want to compete against Liberty and Gorman, and that’s the easiest way to go about it.”

Under the current realignment that was delayed by COVID, the NIAA’s 1A and 2A classes are based on enrollment, while 3A, 4A and 5A are determined sport by sport by the performance-based system.

Neither is expected to change for the foreseeable future.

Given the unusual demographics of Nevada, where the only population centers are at either end of the state with no suitable middle ground upon which to meet, there isn’t a one-size-fits-all for high school sports.

So two weeks ago, there were state basketball tournaments on both sides of the state.

Gorman’s run of nine consecutive state titles ended at the boys 5A event in Reno, with Liberty’s victory in the teams’ fourth meeting proving again that anything is possible. The 4A tournament at Cox Pavilion, meanwhile, saw the Mojave boys and Clark girls win championships by beating rivals of like size and philosophy when it comes to emphasis on athletics.

“It’s never going to be perfect,” Davis said. “But we’ve only been in this sport-by-sport alignment for a very short time, and it seems to be working. Hopefully we can tweak it and make it a little bit better for everybody.”