Unless you count the Shriners who wandered inside the ropes to retrieve wind blown fezzes, 58-year-old James Kenneth Perry of Franklin, Kentucky, was the oldest guy on the golf course Thursday when the Shriners Hospitals for Children Open began at TPC Summerlin.

Ditto 2009 at Augusta National Golf Club in Georgia when the final group pushed beyond Amen Corner. Kenny Perry was 48 years old, 8 months then. He was leading by two strokes with two holes to play in his bid to become the oldest Masters champion.

He parred the first hole of sudden death on which Chad Campbell, the former UNLV star, was eliminated from a three-man overtime battle for the green jacket.

On the second playoff hole, Kenny Perry made bogey.

Thirteen years earlier at Valhalla Golf Club, just two hours up Interstate 65 from his old Kentucky home in Franklin, Perry had a one-shot lead before bogeying the 72nd hole of the PGA Championship. Mark Brooks birdied the 73rd to beat him in a playoff.

They say time heals all wounds. But after shooting 2-over-par 73 on Thursday, Kenny Perry smiled and began to speak with a lilting Kentucky drawl. He said they — whoever they are — have absolutely no idea what they’re talking about.

Two that got away

“They were crushing defeats,” said the PGA’s Tour Methuselah, or at least its George Blanda, the former Kentucky quarterback who still was kicking field goals for the Oakland Raiders when he was 48. “They still stick with me.

“To lose the ’96 PGA to Mark Brooks where all I had to do was par the last hole — it’s a par 5 and I knock a 4-iron right in the middle of the green and I end up messing it up and make bogey. And then to lose the Masters when I was two up with two to play and I lose in a playoff to Cabrera …” 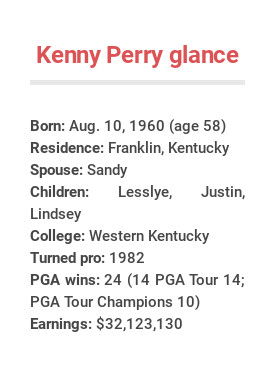 Details were recalled with brutal clarity. A head was shaken, a smile forced.

“I had the lead on the 72nd hole and couldn’t make it happen,” Perry said.

He was standing a few feet and 13 miles from where he had signed his scorecard after the 1987 Las Vegas Invitational. He was 26 then, still a whippersnapper on tour. He tied for fourth, and with the first big check ($55,000) he won playing golf, Kenny Perry repaid all the sponsors that had supported him when he was flunking out of Q-school.

“We played Las Vegas Country Club — I don’t know if it even exists anymore — and I remember Lee Trevino was announcin’ and I hit a 4-iron to about a foot on the last hole for eagle,” Perry said with a clarity much less brutal. “I made enough money where I knew I was going to keep my card that year, and I never looked back.”

Good thing, because a guy could hurt his neck looking that far back. The objects in Kenny Perry’s rearview mirror look more the actual size and distance.

“I didn’t know if I was going to play out here for a long time, but it convinced me I was good enough to compete,” he said of hitting ‘em straight and far in the desert 31 years ago.

Kenny Perry won 14 PGA Tour events, 10 on the Champions Tour and has made so much money playing golf (more than $32 million) that he’s able to give some back. In 1985, a graduate of Lipscomb University in Nashville fronted him $5,000 for his last shot at Q-school. Perry qualified — barely — and agreed to pay the benefactor five percent of his earnings until the loan was paid off.

When it was, Perry kept giving five percent to Lipscomb. Now there’s more than $2 million in a trust fund which continues to pay for scholarships for kids from Simpson County, Kentucky.

“It was the right thing to do,” he said of his philanthropy.

Just as scaling back on golf seems like the right thing to do now, even if he was even to par after 16 holes Thursday.

“I’ve got seven grandkids and another one comin.’ I’ve got a lot of things that are tugging on me a lot harder,” Perry said. “After playing with J.J. Spaun (4-under Thursday) and watching these kids wear it out, it tells me my time is about up.”

He smiled again, and the stiff breeze subsided. It was calm for a moment, with nary a fez in risk of being blown onto the course. If his old Kentucky home was calling him, Kenny Perry could almost hear it.

“I don’t have any goals,” he said. “I just want to kinda come out and see the fellas one more time, you know?”