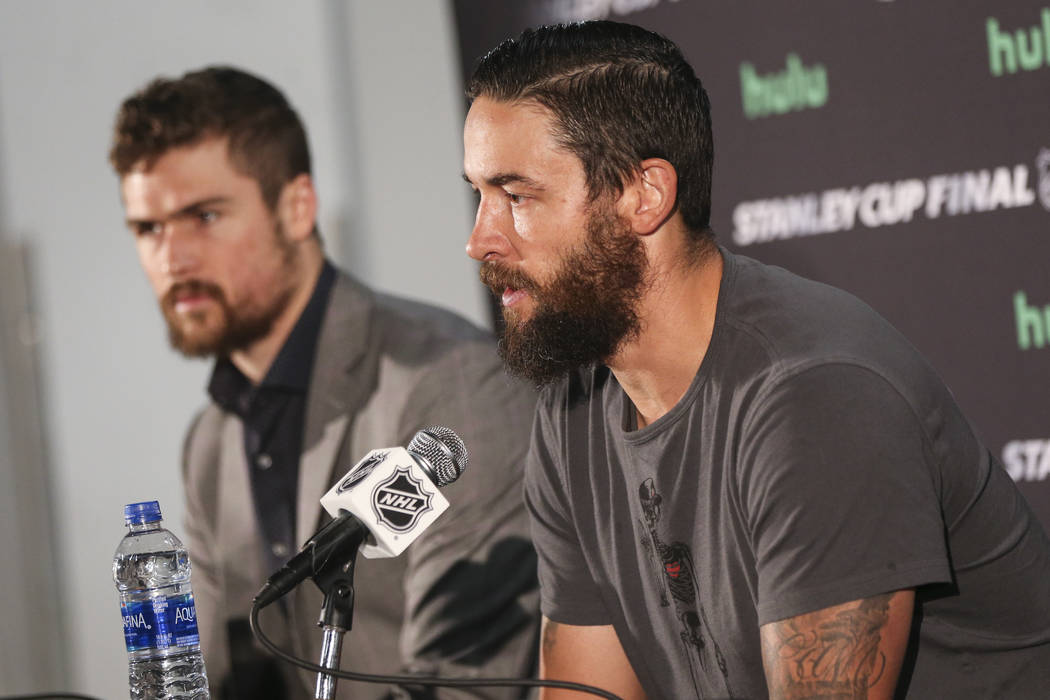 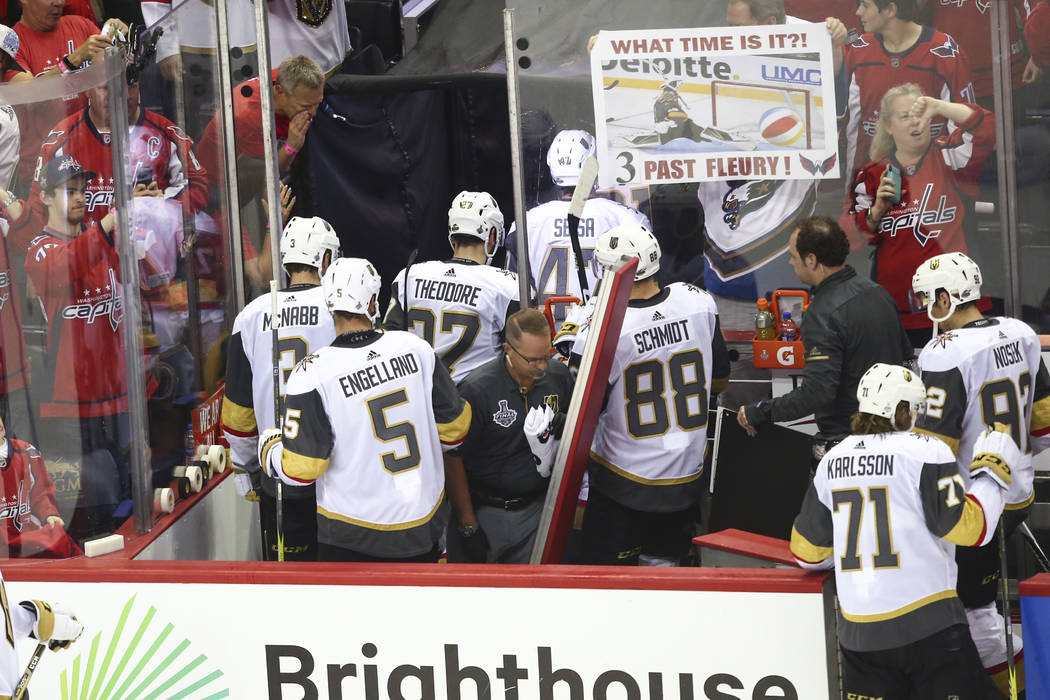 Golden Knights players leave the ice after losing 3-1 to the Washington Capitals in Game 3 of the NHL hockey Stanley Cup Final at Capital One Arena in Washington on Saturday, June 2, 2018. Chase Stevens Las Vegas Review-Journal @csstevensphoto

ARLINGTON, Va. — It rained in the nation’s capital on Sunday.

Actually, it has rained every day since the Golden Knights cruised in via the Beltway to resume the Stanley Cup Final against fellow upstart Washington. But this was the first day the weather matched the team’s mood:

For the second time in four nights, the Knights were outplayed by the Capitals on Saturday. They lost 3-1, and trail the best-of-seven series 2-1.

Low pressure for sure.

That will become a much higher pressure if Vegas doesn’t get sorted out in Monday’s Game 4 at Capital One Arena.

The Knights seem to know this. This is the first time they’ve lost two in a row since the battle for Lord Stanley’s Cup commenced, and while their backs aren’t exactly pressed to the wall, the wall is getting closer.

Judging from their postgame quotes, and the utterances of the few who addressed the media on Sunday Soggy Sunday, this is a team struggling to explain how something that has gone so right for so long could go so wrong so fast.

Like the song from the old Rodgers and Hart musical, the Knights sounded bewitched, bothered and bewildered as they offered possible explanations for the Capitals having turned the series around.

Not enough shots? “We have to get more pucks on net. Twenty-two shots isn’t going to win you many games,” said bewitched Ryan Reaves.

Not enough effort? “I think everybody knows what’s at stake right now. We have to find ways to come back in games, keep battling. It’s the finals. I don’t think anybody needs a reminder to play hard,” said bothered Marc-Andre Fleury.

Not enough rest? “We had twice as much time off as they have in the playoffs. We should have a lot in the tank. Just gotta dig down and go harder,” said bewildered Deryk Engelland.

Not enough production from the second forward line? “We’ve got to improve for sure. Definitely our line being minus-3 is not a good performance,” said bewitched David Perron.

Too many mistakes by Shea Theodore leading to Washington goals? “I don’t get what you’re saying. I thought he was fine. He’s been great all year,” said bothered James Neal.

Too much broken stick? “On that play, I tried to keep the puck in (the attacking zone) the best I can. When you don’t have a stick, it’s tough to back out, especially on an odd-man rush. That’s one I’d like to have back,” said bewildered Shea Theodore.

Too many Capitals standing tall on the blue line? “We saw that before, in the Tampa series. They clogged them up, a skill team. You think you can make a play, have some room to skate, and then it gets clogged up pretty quick.” added Neal, a little bewitched.

Too much dependence on Marc-Andre Fleury? “Our goalie’s been bailing us out with huge saves, and we have to bear down and be better for him,” added Engelland, a little bothered.

Too much adversity? “Yeah. We haven’t lost two in a row. We’ve only been down for a game. It’s not like we haven’t been here.” Reaves again. A lot bewildered.

Too much trust in the weatherman, or in time-honored axioms? “It’s frustrating to lose. We would like to win every game. But tomorrow the sun will rise again.”

That was Fleury, trying to be optimistic.

The sun did not rise again on Sunday in the District of Columbia. Apparently when the Knights’ netminder was channel surfing, the Weather Channel was showing the forecast for Bora Bora.

Far from out of it

If somebody put up a dartboard listing all the reasons that could cause a team to lose a hockey game, the Knights might have hit every spot on the cork. Except, perhaps, the bull’s-eye.

Despite all the frustration and anxiety and the wailing and gnashing of teeth and denture plates among his players, it was Gerard Gallant who may have come closest to hitting it. The Knights’ coach offered a succinct reply when asked how the team could recapture the magic that has gotten it this far.

“We come out and play our best game of the series. After (Monday) night, hopefully you guys are asking me, ‘Well, you’re 2-2 and you’re going back (to Las Vegas) and you get home ice.

“That’s all it is. We’re down 2-1. You have to lose four games before you lose the Stanley Cup, and we’re far from out of it.”

Monday’s forecast in the nation’s capital is for mostly sunny skies with a high of 80 degrees and only a 10-percent chance of more rain.

Things already are looking up.