At the end of the 2019 season that saw him pitch in 28 games after appearing in 25 the season before for the Colorado Rockies, Mike Dunn’s big league career was sitting at the end of the bar, waiting for the lights to come on.

It was closing time, and he knew it.

A couple of calls were made on his behalf to baseball people overseas, but his heart wasn’t in it anymore. Neither was a pitching arm made weary by time and injuries. He had made the decision to return to Las Vegas to spend time with his family, to watch his kids grow up.

When the coronavirus hit, sending everybody scattering in the manner of a line drive hit into the dugout, it was confirmed the former College of Southern Nevada and Cimarron-Memorial High star had made the right call.

“I was already planning on being home with the kids,” said the former left-handed setup man, who had gone to spring training to discuss becoming a Rockies traveling pitching coach before the virus scuttled that possibility, or at least put it on indefinite hold. “All in all, it was a good time to end it.

“I kinda knew where I was at it in my career, what my body was going through. The writing was on the wall. Nine years was long enough, I guess.”

Nine full years (plus parts of a couple of others) was nine more than anybody thought he would have after the Yankees drafted him in 2004 out of CSN in the 33rd round. Dunn was an outfielder and first baseman then. It was the Yankees who taught him how to throw a hard slider.

“I was told multiple times that I had no chance to make the big leagues,” Dunn said after he and CSN baseball coach Nick Garritano finished playing golf Monday.

Alas, he made his major league debut with the Yankees in 2009. He appeared in only four games, but those appearances came as the Bombers were making a playoff push en route to winning the World Series. Dunn still considers the experience a career highlight.

Dunn finished his career with the Rockies, and though his three seasons with them weren’t productive, they were lucrative — he made $19 million, part of the reason he can bide his time in deciding what next to do.

“My wife (Kimberly, his high school sweetheart at Cimarron) made a book for me with all the articles over my career and it kind of brought back memories,” said Dunn, who will turn 35 on May 23. “My time in Miami was awesome.

“Just to be able to live my dream for nine years and have my kids (sons Mitchell and Matthew) to be able to go out on the field with me and see what I did … it was an amazing run. I loved every minute of it.”

Number on a wall

Dunn grew up in Farmington, New Mexico, near oil and natural gas fields in the Four Corners region, before transferring to Cimarron-Memorial for his senior season. He said he owes much of his success to CSN, where his retired jersey number (44) hangs on the outfield wall.

CSN not only provided him with a spot in the lineup, but a place to work out during the offseason after he turned pro. Dunn has paid it forward by endorsing checks to the baseball program over the past several years. When he continued showing up at the Henderson campus this spring, Garritano gave him a uniform and a spot on the coaching staff.

“I was able to live the dream that they are all shooting for, so they get to ask me questions that they would not ask Nick and the other assistants,” Dunn said about his relationship with the CSN players.

With the 2020 season having been canceled and social distancing still in place, the Coyotes haven’t had a chance to ask Dunn if he’d be interested in making a comeback if the major league season finally gets started, and rosters and pitching staffs are expanded.

He finished his career with an ERA of exactly 4.00, and it was pointed out that if he could get a man or two out, he could lower it to 3.99. But there’s now a three-batter minimum for guys summoned from the bullpen to start an inning.

Dunn chuckled, knowing what can happen to one’s ERA when a young slugger with huge biceps gets hold of one with ducks on the pond and the wind blowing out. 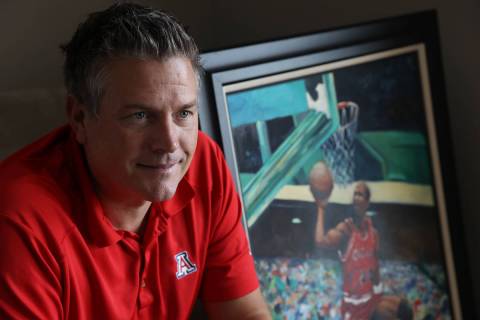