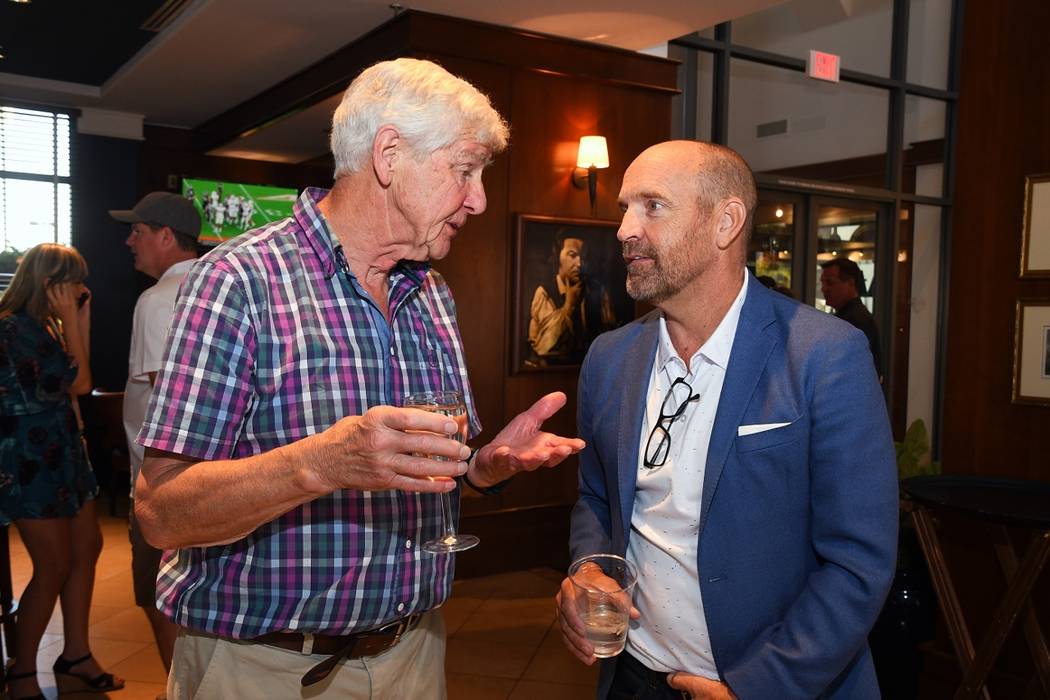 For 32 years, Simon Keith and Jonathan Groves were joined at the heart.

On Friday, the hearts of Keith and Jonathan’s father, Roger, beat side by side at Revere Golf Club during a tournament and dinner benefiting children who have undergone organ transplants.

Keith, a former UNLV soccer star, received the gift of life from Roger Groves’ son, a schoolboy soccer player in Wales who died of a brain hemorrhage on the field in 1986. Keith, 54, lived more than three decades with the youngster’s heart before having to undergo a second transplant in March during which he also received a kidney.

“Having Roger here is really unbelievable,” said Keith, who in 2011 traveled to Great Britain to meet his donor’s father, with the poignant union becoming the subject of an ESPN documentary. “From something that happened in 1986, and here we are now, some 30-odd years later. It’s very emotional.”

Roger Groves said finally meeting Keith, their ongoing friendship and the invitation to play golf in Las Vegas for a great cause has meant a great deal. At Friday’s dinner, Keith announced a $1 million gift from the Engelstad Foundation that will help his foundation continue its mission.

“At the time you make the decision, it’s a very simple thing. And then you start to reflect on it, and there’s always the fear in the back of your mind that maybe the heart has gone to some big fat slob that sits in front of the television,” said Groves, who has found peace as well as humor through his relationship with Keith.

“And then to discover who actually has received it, and how it’s enabled so much good to come — not just to him, but he has a family.”

The two exchanged a knowing glance and nod.

“And now I have a surrogate son,” Roger Groves said.

Mel Washington, a former boys basketball coach at Las Vegas High who went on to coach at several valley schools, died Sept. 28 after a lengthy illness. He was 66, and a role model to many of his former players.

“Sometimes a kid just needs somebody to believe in him,” said Che’ Jones, a basketball coach at Phoenix Junior College who eulogized his former coach.

Jones said Washington urged him to go to college despite a 1.9 GPA. He ended his playing career as the second all-time leading scorer at Ohio State-Newark, has his master’s degree and is finishing his doctoral studies.

“All the success I’ve had as a coach, getting my jersey retired in college — that doesn’t happen if he doesn’t push me through the door,” Jones said.

A BIG CONGRATS to Coach Che' Jones as his Phoenix College Bears are the '14 NJCAA D-2 Champions!
🏀🏆#CDBA4LIFE pic.twitter.com/rrjq1gAZsH

— If somebody ever writes a book called “Heroes of the Division Series,” longtime Las Vegan Jerry Reuss will have a chapter to himself.

In the first National League Division Series, necessitated by the strike of 1981, Reuss pitched nine scoreless innings for the Dodgers against the Astros in Game 2, only to get a no-decision. In the winner-take-all Game 5, he threw nine more scoreless innings and got credit for a shutout.

Reuss’ mound opponent in Game 5 was pretty good, too. His name was Nolan Ryan.

— When Texas Longhorn Cole Hammer missed a 2-foot putt in a playoff at the Southern Highlands Collegiate in March, it opened the door for UNLV’s Jack Trent to earn the win and automatic berth into the Shriners Hospitals for Children Open, during which Trent made a spectacular PGA Tour debut last weekend.

It turned out OK for Hammer, too. After being given an exemption into the Houston Open, he shot 67 against the PGA touring pros on Thursday and 77 on Friday to narrowly make the cut.

With a 5-under par 67, 20-year-old Cole Hammer is currently in the top-10 at the Houston Open. 💯pic.twitter.com/kChyp6JO7h

— Newarena.com ranked the 1990-91 UNLV basketball team No. 24 on its list of the 25 Best Men’s College Basketball Teams of All Time. The Rebels (34-1) were the only nonchampionship-winning team to make the list.

The undefeated 1970-71 UCLA team topped the Newarena poll that — major upset when it comes to lists such as these — included a bunch of teams that never played on ESPN or CBS.

Local sports writers used to play a beer-drinking game on NFL Sundays at the atrium bar at The Mirage in which you weren’t allowed to go home until a celebrity was spotted in the nearby lobby.

One day Rip Taylor, who died Oct. 6 after an epileptic seizure, was spotted.

RIP, Rip. You always will be a star in my eye, once I remove the confetti from it.

The King of Confetti, The Crying Comedian, the great Rip Taylor has passed away at 84. He made thousands of outlandish appearances on television and in nightclubs and his zany shtick and over-the-top delivery was a favorite for me growing up. pic.twitter.com/4J7tyrynHN