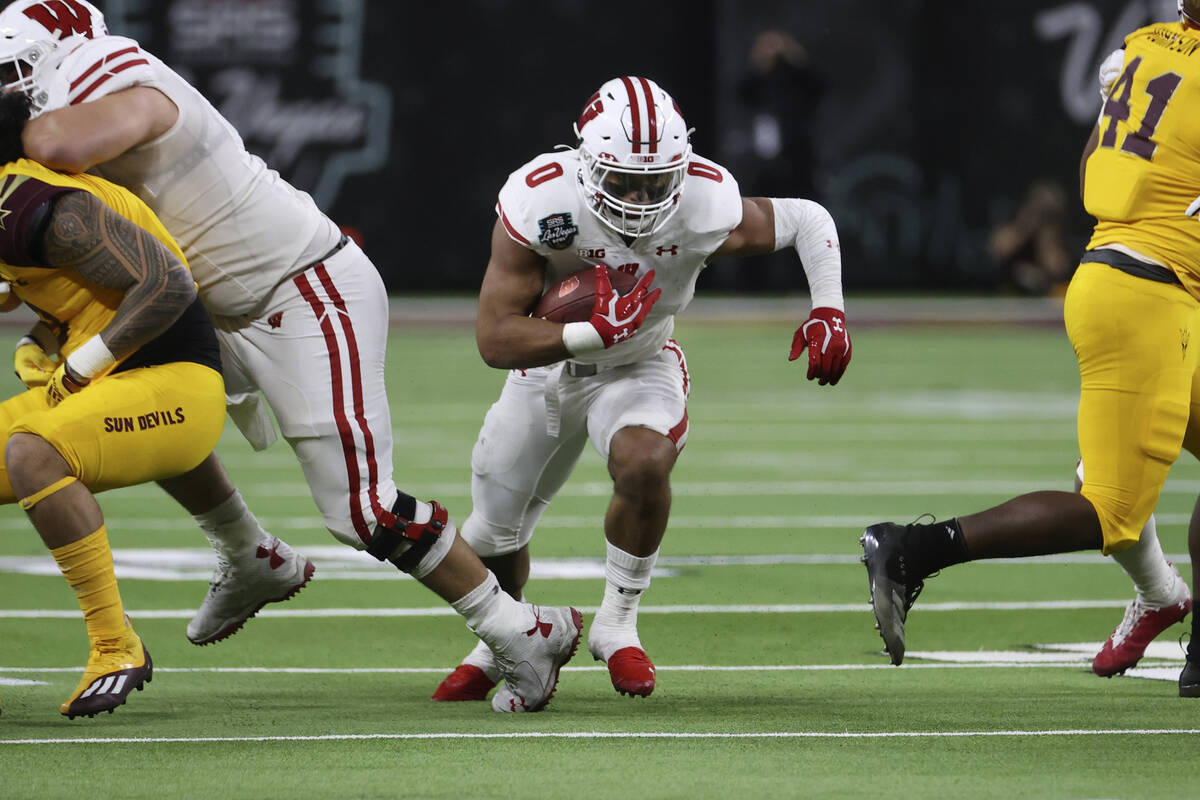 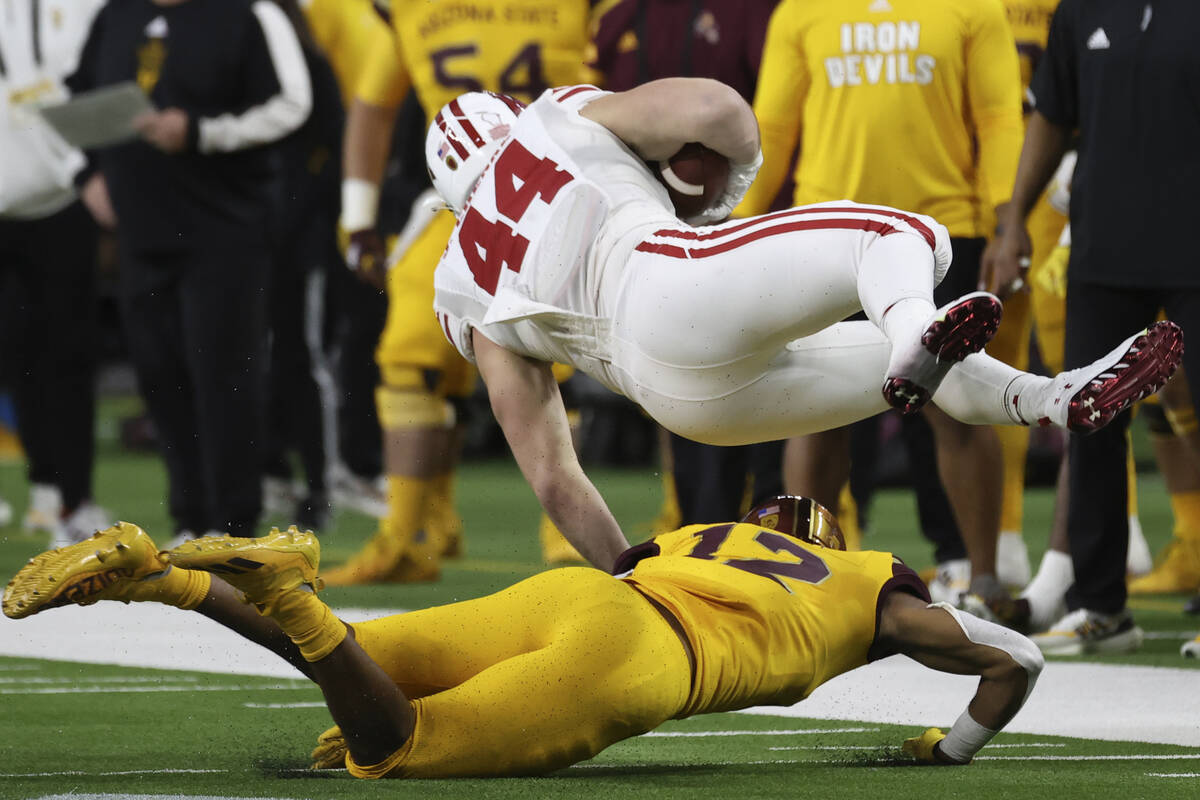 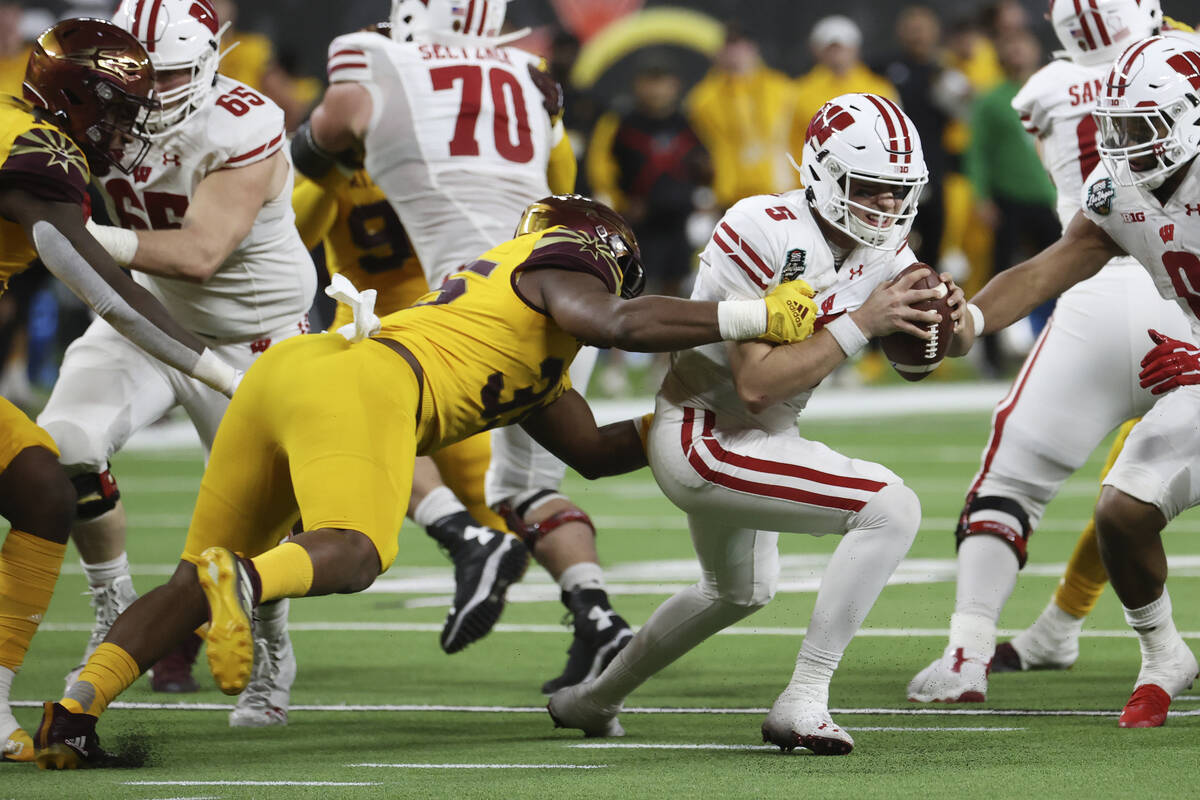 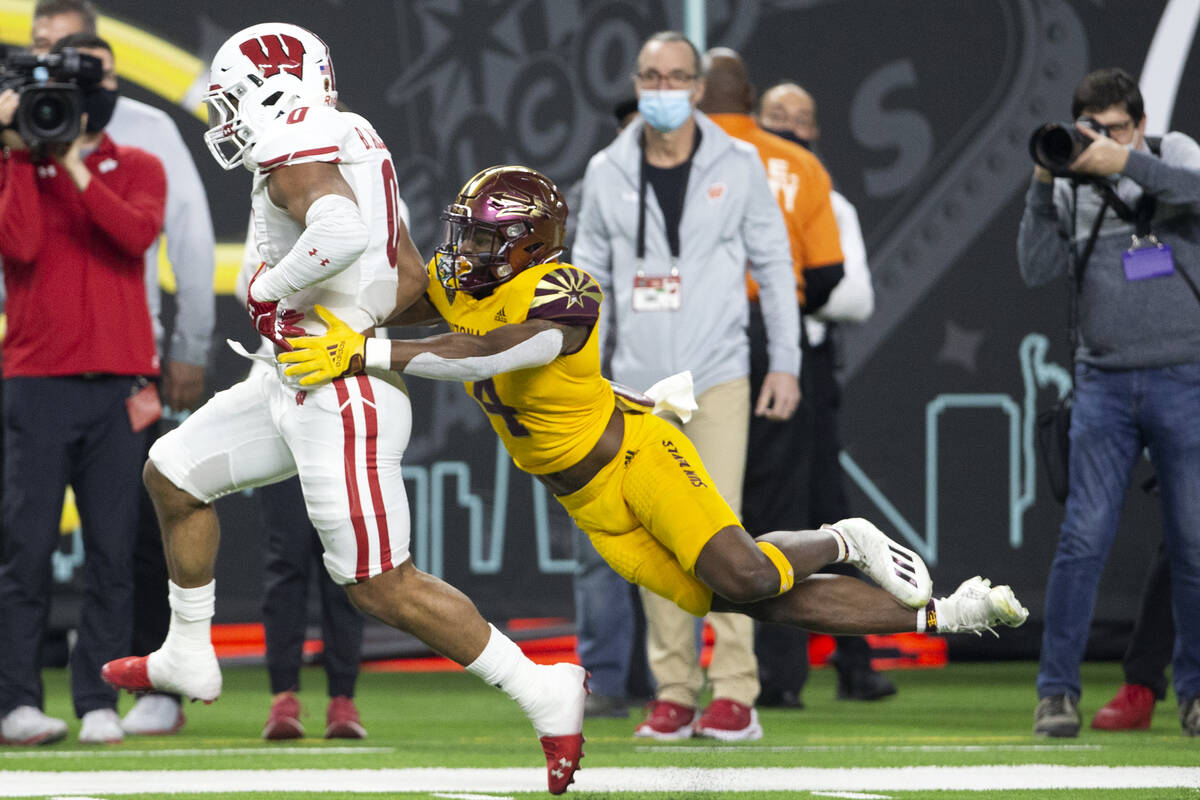 Arizona State Sun Devils defensive back Evan Fields (4) jumps to tackle Wisconsin Badgers running back Braelon Allen (0) as he runs for the end zone during the first half of the Las Vegas Bowl NCAA college football game at Allegiant Stadium on Thursday, Dec. 2021 in Las Vegas. (Ellen Schmidt/Las Vegas Review-Journal)

After watching Wisconsin slog to a 20-13 victory over Arizona State in the first Las Vegas Bowl played at Allegiant Stadium Thursday night, it should have been obvious that for a bowl game to be successful, at least one of the following must be present:

A 5-gallon sideline cooler filled with mayonnaise to dump on the winning coach.

The Las Vegas Bowl, said to be new and improved, had none of these.

Instead of a ton of fans, it had 32,515 — the second-smallest Las Vegas Bowl turnout in the past 16. The Raiders’ palatial digs were less than half-filled when it was thought the game might sell out, at least before COVID-19 returned like an univited house guest.

Instead of lots of touchdowns, it had four field goals.

Instead of snow, it had climate control.

Instead of a Poulan Weed Eater, it had a title sponsor that distributes building materials.

The Wisconsin players didn’t dump roofing tiles or asbestos shingles on Paul Chryst. Unless I missed it, they didn’t even douse their coach in Gatorade.

None of this was the fault of the Las Vegas Bowl, which was tasked with making lemonade out of a big, fat lemon. As one of its officials so eloquently stated in the press box, “at least we had a game.”

Had the bowl committee (or ESPN) selected UCLA instead of Arizona State, they would have had an empty stadium instead of one less than half-filled, based on the fate of the Holiday Bowl in San Diego. Four hours before kickoff on Tuesday, the Bruins claimed they were so sick and tired they couldn’t put a team on the field against North Carolina State.

Here’s the irony: Until Arizona State somehow scored a second-half touchdown, the Holiday Bowl might have been more compelling despite being canceled.

The closeness of the final score notwithstanding, Wisconsin’s early lead never seemed in jeopardy in a game so filled with malaise (but not mayonnaise) that with 10 minutes to play, I had pencilled in Logan Taylor, the Sun Devils’ backup punter, as my No. 3 star.

After Eddie Czaplicki was injured upon being run into, Taylor pinned the Badgers at their own 3-yard line with a 44-yard punt that checked up like one of Phil Mickelson’s approach shots.

Arizona State’s offense consisted mostly of scrambles and underthrown passes by quarterback Jayden Daniels that were caught. But there was murmuring in the press box that if the Sun Devils could get the ball back, they might win despite having amassed — if that’s the right word — only 219 yards.

That’s the total with which they finished. ASU never got the ball back. Wisconsin hemmed and hawed and spit and whittled, covering 90 yards in 18 plays to run out the clock without scoring.

It was a brand of old school Big Ten football that would have made Woody Hayes salivate.

Three yards and a cloud of rubber pellets from the field turf.

Remember when John McKay was asked about the execution of his Tampa Bay Buccaneers back when they wore the creamsicle uniforms, and McKay said he was all for it?

There were no such witty remarks from the coaches during their postgame remarks. There were no apologies when two may have been warranted.

ASU coach Herm Edwards said the Sun Devils were so depth shy after opt-outs that two offensive players played in the defensive line.

Wisconsin’s Chryst said he was proud of his group that managed but 294 yards. It was a good night, it took a lot of guys to produce the victory, he said. The Badgers apparently were headed back to the Wisconsin Dells instead of Disneyland.

The night’s best quote actually was spoken before halftime. A guy on the Arizona State side asked a girl sitting alongside if she would marry him.

If the marriage lasts, the two might be the only paying customers who will look back on the first edition of the new and improved Las Vegas Bowl and call it memorable.