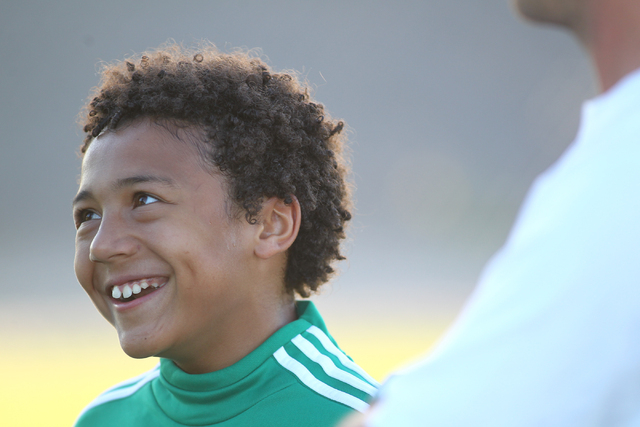 Ten-year-old Lateef Omidiji Jr., left, laughs as his coach, Esad Morina, speaks with the Review-Journal before Omidiji Jr.'s soccer practice at Russell Road Recreation Complex, 5901 E. Russell Rd., in Henderson on Wednesday, May 14, 2014. The Nigerian Football Federation sent Danladi Nasidi, coach of the country's U-13 team, to watch Omidiji Jr. play and get acquainted with him. (Chase Stevens/Las Vegas Review-Journal) 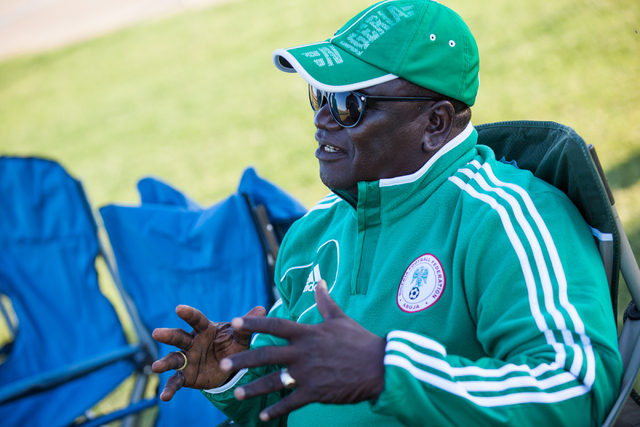 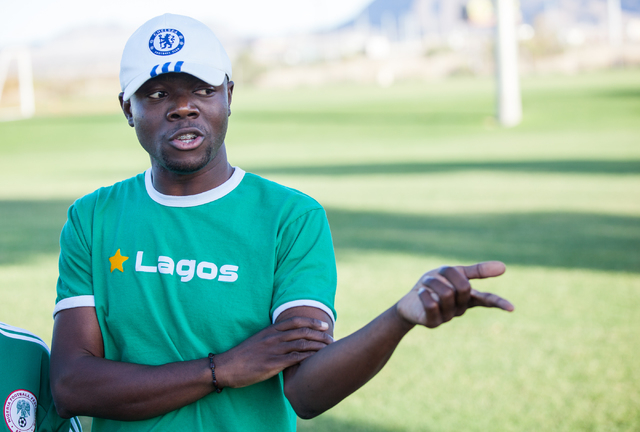 Lateef Omidiji, who once played soccer in his home country of Nigeria, speaks about his son, 10-year-old Lateef Omidiji Jr., with the Review-Journal before Omidiji Jr.'s soccer practice at Russell Road Recreation Complex, 5901 E. Russell Rd., in Henderson on Wednesday, May 14, 2014. The Nigerian Football Federation sent Danladi Nasidi, coach of the country's U-13 team, to watch Omidiji Jr. play and get acquainted with him. (Chase Stevens/Las Vegas Review-Journal) 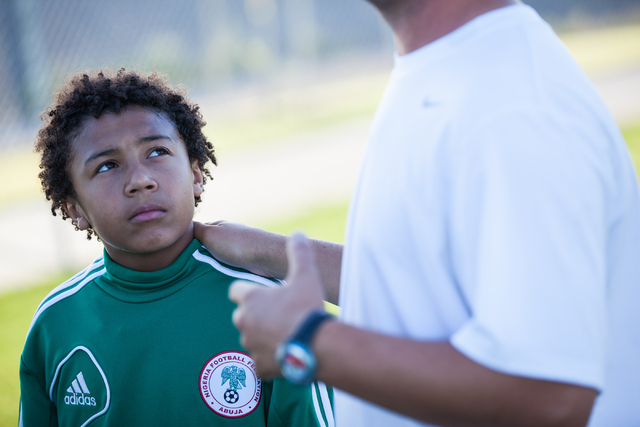 Ten-year-old Lateef Omidiji Jr., left, listens as his coach, Esad Morina, speaks with the Review-Journal before Omidiji Jr.'s soccer practice at Russell Road Recreation Complex, 5901 E. Russell Rd., in Henderson on Wednesday, May 14, 2014. The Nigerian Football Federation sent Danladi Nasidi, coach of the country's U-13 team, to watch Omidiji Jr. play and get acquainted with him. (Chase Stevens/Las Vegas Review-Journal)

About a year ago at this time, Lateef Omidiji Jr. was standing in the dock at Southampton. He wasn’t trying to get to Holland or France. That was John Lennon and Yoko Ono in the “Ballad of John and Yoko.”

Lateef Omidiji Jr. was trying to get to the soccer pitch. He was a long way from home.

He had been invited to train with the Southampton FC academy kids. Southampton FC in an English soccer club that plays in the English Premier League. The EPL is massive over there, like the NFL is on our side of the pond.

So this was a pretty big deal for the local kid.

It became an even bigger deal when Nigerian-born Lateef Omidiji Sr. was approached by scouts from the football federation in Nigeria. “Would Lateef Jr. be interested in representing his father’s homeland on the football pitch?”

Lateef Sr. was thrilled. This was before the Islamic militants kidnapped those schoolgirls.

“We’ll see … in six or seven years,” he told the Nigerian scouts.

Lateef Jr. was only 9 years old. He might not have been eating chocolate cake from a bag, like John and Yoko, but he still was drinking juice from a box.

So Lateef Omidiji Jr. was the only member of the Heat FC soccer club wearing a green Nigerian national football club shirt during practice at the Russell Road Athletic Complex in Henderson the other night.

A large man wearing a similar shirt and dark glasses was resting on a lawn chair, perusing the young Heat FC players with a watchful eye.

Danladi Nasidi, coach of Nigeria’s U-13 national side, had traveled more than 20 hours in multiple airplanes from Lagos to Las Vegas to see for himself if what those scouts said about the little guy from America was true.

“He’s the solid man behind the scene in Nigerian soccer,” Lateef Sr., a UNLV grad and IT engineer at Boyd Gaming, said of Nasidi’s reputation. “When I was in Nigeria playing soccer, he was one of those guys who would come into your neighborhood. But you wouldn’t know he was in your neighborhood.

“Of course, he never picked me … but he’s still one of the most respected coaches in Africa.”

You could say the same about Nigeria as a soccer playing nation.

The Super Eagles, as the men’s national side is called, have qualified for five of the past six World Cups. Nigeria’s U-17 team has won four World Cups, more than any other nation, and finished second three times. For sake of comparison, mighty Brazil has won three U-17 World Cups.

Although it might seem extreme that national soccer coaches would recruit players who still drink juice from a box, Nasidi said it is not that unusual on the other soccer-playing continents.

“I am used to it,” he said of putting his watchful eye on neophytes such as Lateef Jr. “My scouts in London said he is a talent. So I want to bring him to Nigeria, to see if he can lift up my team.”

Nasidi said he is impressed by Lateef Jr.’s soccer IQ, that mentally he is ready to compete with older players. And physically? “Physically, he is OK.”

Lateef Sr. nodded toward where Nasidi was sitting on that lawn chair, then nodded again toward where Esa Morina of Kosovo, Lateef Jr.’s coach with Heat FC who played professionally in Europe and has a coaching license from the European soccer union, was putting his son and the other young soccer players through drills.

“The long-term goal is that with him (Nasidi) teaching him and with him (Morina) teaching him — and if he keeps growing the way he’s growing — that someday he finds himself playing with a professional club in Europe,” Lateef Sr. said. “That is the ultimate hope.”

Lateef Omidiji Jr. is in fifth grade, a straight-A student at Mabel Hoggard Elementary school in Las Vegas. He has curly hair and can run like a small deer. He is precocious; he said if he doesn’t become the next Didier Drogba, his favorite soccer player, and play for Chelsea in the EPL, then he wants to go to medical school and play for Harvard.

The kid is 10. He wants to go to Harvard Medical School, and he wants to score soccer goals. In that order. He did not talk about playing video games.

He has a 6-year-old brother named Rasheed. At first, I mistook Rasheed for Lateef Jr., because Crystal, Lateef’s mother, had said her son was little.

Rasheed was wearing a Barcelona soccer kit at his brother’s practice. He was kicking around the soccer ball. Lateef Omidiji Sr. told me there are things Rasheed can do with a soccer ball that Lateef Jr. could not do at Rasheed’s age.

Danladi Nasidi, the respected Nigerian youth soccer coach, was still sitting in that lawn chair. He appeared to be checking out the little guy’s mad dribbling skills out of the corner of his eye.