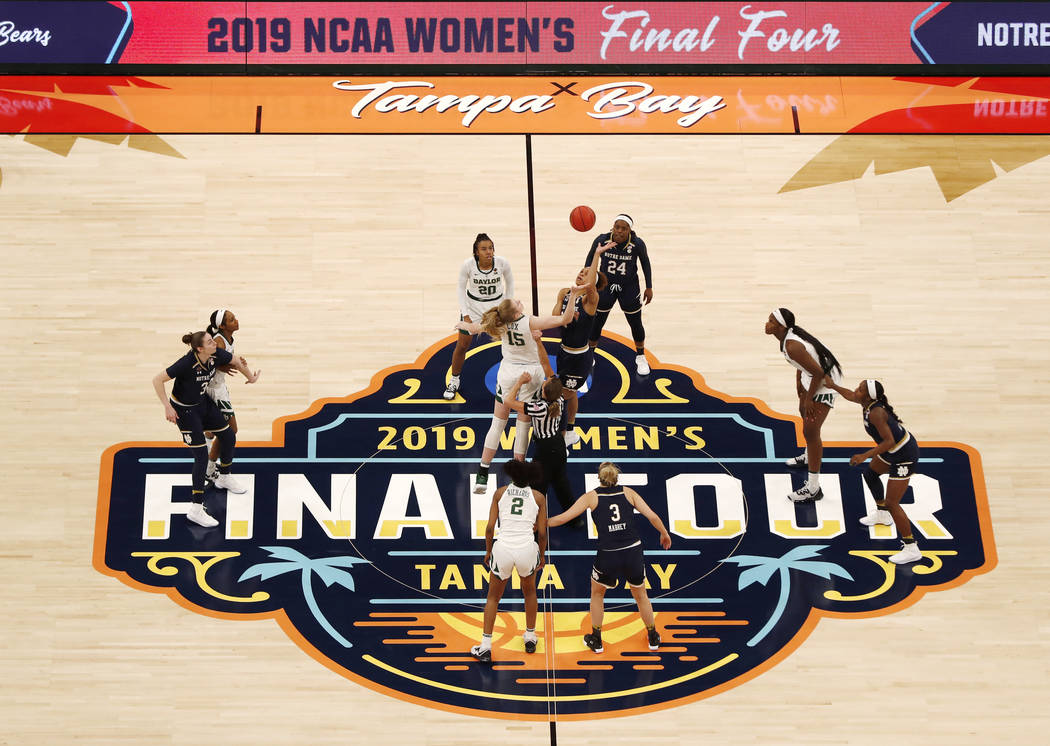 Since retiring as UNLV athletic director in 2013, Jim Livengood has been working tirelessly — or at least harder than you might expect a retired guy to work — to enhance the NCAA student-athlete experience via new Las Vegas sporting events.

Two that he envisioned were 16-team postseason basketball tournaments.

The first, a men’s tourney, attracted only eight teams and folded after one year. Old Dominion defeated Oakland in the Vegas 16 at Mandalay Bay in 2016. But there are those who believe Livengood’s idea of turning a consolation tournament into a “bowl-game experience” has merit and might have endured with the right teams. Or at least more of them.

Livengood also has been beating the drum for the NCAA to hold its entire women’s Sweet 16 in Las Vegas. That novel notion has moved closer to fruition, with the women’s basketball committee suggesting this month the four-site regional format change to two cities hosting eight teams each beginning in 2023 to bolster interest and attendance.

Las Vegas is expected to be one of the bidding cities.

“I think the two eight-team regionals are maybe the first step,” Livengood said. “I think it’s a great move for women’s basketball.

“Some of these things take time,” the former men’s basketball tournament chairman said of the NCAA evolving on playing championship events in Las Vegas. “It’s like trying to move an ocean liner.”

If that’s the case, Jim Livengood is turning out to be a valuable tug boat in Las Vegas’ harbor.

— A couple of weeks after the Aviators discussed extending protecting netting at Las Vegas Ballpark after fans were struck by foul balls, it happened again. I received a letter Friday from Meredith Wolf, who said her 5-year-old son Levi was hit in the back of the head on July 24.

“The ball was traveling so fast that we lost sight of it as it approached our seats,” the boy’s mother wrote. “We suddenly heard a thud, followed by a scream from Levi …”

Thankfully, her son wasn’t seriously injured. All Meredith Wolf is seeking from the Aviators is some compassion and perhaps an assurance in writing the club is doing all it can to do to prevent spectators from being skulled by screaming liners.

A few years ago I was invited to hang out with Lenny Randle as he watched his son Bradley rush for 113 yards and two touchdowns in a UNLV football victory over New Mexico.

But I was remiss in not asking about another play that generated massive Internet traffic on its anniversary this week. The video shows a Cleveland pitcher throwing behind Lenny, and Lenny getting even by then dropping a drag bunt and crashing into the Cleveland pitcher — and everybody else who got in his way.

That would never happen in today’s game for various reasons, the foremost being that today’s ballplayers do not know how to drag bunt.

Bob Johnson threw at Lenny Randle. Lenny then did this… 👊
pic.twitter.com/E9D2i1r732

— Either Lights FC coach Eric Wynalda is to be commended for his boundless optimism or the United Soccer League is to be ridiculed for its inclusive playoff system.

“Very disappointed with the result but we will keep moving forward … playoffs still possible,” wrote Wynalda on his Twittter account after a 1-1 draw with Tulsa had the Lights treading water in 14th place in an 18-team division.

Very disappointed wil the result but we will keep moving forward – they had one shot on goal and it went in – great effort from the boys – playoffs still possible https://t.co/fKdVRc5yKg

— Women’s bowling held its world championships at the South Point’s Tournament Bowling Plaza this week. Unlike the World Series or Super Bowl, it truly was a world championship, with Cherie Tan of Singapore defeating Maria Jose Rodriguez of Colombia to win the Masters final.

You never forget your first race!

Now’s the chance to introduce your friends and family to NASCAR! #SouthPoint400 tickets start at just $49.

Utah quarterback Tyler Huntley, speaking of the Brigham Young football team after the Utes’ 30-12 victory, their ninth in a row in college football’s Holy War: