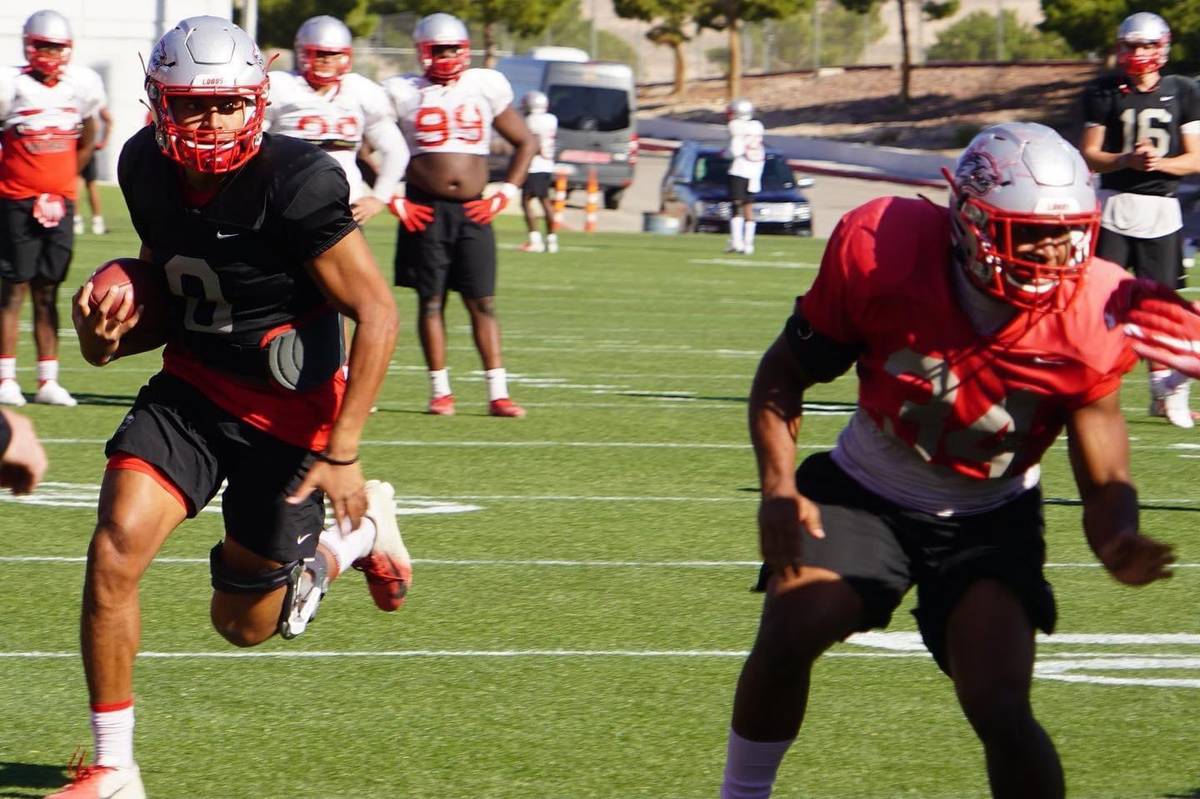 Quarterback Tevaka Tuioti, left, and the New Mexico football team have switched their home base to Sam Boyd Stadium amid a COVID-19 surge back home in Albuquerque. (Courtesy: Frank Mercogliano)

A few years before the NBA’s Kings moved to Sacramento, they were known as the Kansas City-Omaha Kings, playing games in both meat-packing cities.

The University of New Mexico football team can relate.

The Lobos have indefinitely switched their home base from Albuquerque to Las Vegas amid a coronavirus surge in the Land of Enchantment and protocols to control it that have precluded New Mexico from practicing as a unit.

The team moved its home base to Sam Boyd Stadium this past week before departing for a Saturday game at Hawaii. The Lobos are expected to return to Las Vegas to begin preparations for a Nov. 14 game against UNR at Sam Boyd. No spectators will be allowed for the 3:30 p.m. Mountain West matchup.

“I think I might have found a Boise State pom-pom,” Frank Mercogliano, New Mexico’s communication director, said about practicing at the former home of UNLV that has basically sat dormant since Washington defeated Boise 38-7 in December’s Las Vegas Bowl.

“Honestly, it’s been great. We’re just happy to be able to practice because we haven’t been able to do it.”

After losing 38-21 at San Jose State in a game that was supposed to be played in Albuquerque, the Lobos returned home to pack and bused to Las Vegas on Monday. Mercogliano didn’t leave until Tuesday so he could bring three players with him who were coming off quarantine.

“I have two suitcases, a duffel bag with cold weather gear in case we have to go to Air Force, a box of supplies, and I actually brought a laundry hamper just in case” the Lobos wind up staying in Las Vegas indefinitely, Mercogliano said.

The team brought weightlifting and other training room equipment and is headquartered in an NBA-like bubble at the Hilton Lake Las Vegas Resort & Spa. A study hall has been set up where the Lobos can continue online classes.

The bubble will be reinflated when New Mexico arrives in Hawaii, Mercogliano said.

“It’s like being a caged animal in a zoo,” he said about being in Las Vegas and Honolulu and not being allowed to partake in what the tourist destinations offer. “You can see all the things outside the cage bars, but you can’t do anything.”

But the Lobos aren’t complaining, Mercogliano said. It could always be worse. They could be stuck in Kansas City or Omaha.

We are live in Las Vegas back to our home in ABq with Lobo Talk! Nice to have the whole gang back together! #GoLobos https://t.co/EOHOlfm5yK pic.twitter.com/GnC9caTTTe

— I once attended a baseball alumni game at the Rancho High diamond that attracted 100 or so former Rams players, including nine from the same Rancho American Legion team who were drafted by major league clubs.

I remember Marty Barrett, a former Boston Red Sox second baseman and MVP of the 1986 American League Championship Series, and brother Tommy, who played for the Philadelphia Phillies and Red Sox, trying to match older faces with the younger ones of their youth.

The alumni game and barbecue were organized by Tex Anthony, who coached the Rams to two state baseball titles during the 1970s, and their then-coach, Tom Pletsch, who would return the program to its lofty station.

And on a brisk and bright January day in 2008, he helped a bunch of grown men feel like young boys again.

— Armani Rogers, the quarterback once touted as the savior of UNLV’s program before he transferred to Ohio University, came off the bench to complete a pass for 3 yards and rush seven times for 32 yards in the Bobcats’ 30-27 loss to Central Michigan on Wednesday.

While not exactly a stellar performance, it was better than the one by the equipment man who spelled the name on the back of his jersey RODGERS.

Grad transfer Armani Rogers (UNLV) is in at QB on this series for the Bobcats, as planned. Not planned: spelling his last name "Rodgers" on the back of the jersey.

“The contract tracing is killing us,” says Todd Berry, executive director of the American Football Coaches Association. “All the sudden the coaches are calling me."

They are saying it out loud: performance over health. This is college football.https://t.co/vDXtkmKPPE

— Stewart Mandell of The Athletic, on the Rutgers-Ohio State game in which the Buckeyes were favored by 39 points:

“I’m told Rutgers is preparing to file a lawsuit Saturday to get the officials to stop counting Ohio State’s points.”

I'm told Rutgers is preparing to file a lawsuit Saturday to get the officials to stop counting Ohio State's points.