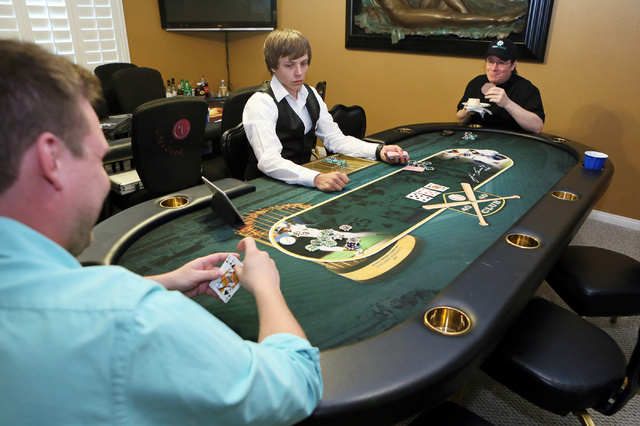 Bradley Anderson, left, and professional poker player Jamie Gold, right, play in a heads up tournament at baseball great Jose Canseco's home on Friday, June 26, 2015, in Las Vegas. Dealer Jordan Hufty waits for Anderson's move. Anderson won a contest that was hosted at the home of Canseco and sponsored by YouStake allowing him a chance to play for a seat in a World Series of Poker event. (Ronda Churchill/Las Vegas Review-Journal) 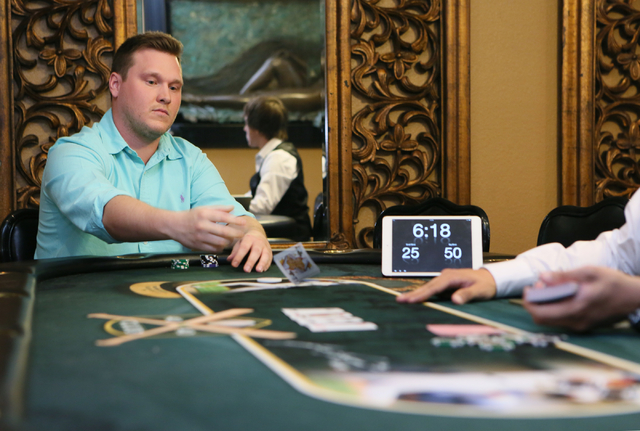 Bradley Anderson throws his cards in while playing in a heads up tournament with professional poker player Jamie Gold at baseball great Jose Canseco's home on Friday, June 26, 2015, in Las Vegas. Anderson won a contest that was hosted at the home of Canseco and sponsored by YouStake allowing him a chance to play for a seat in a World Series of Poker event. (Ronda Churchill/Las Vegas Review-Journal) 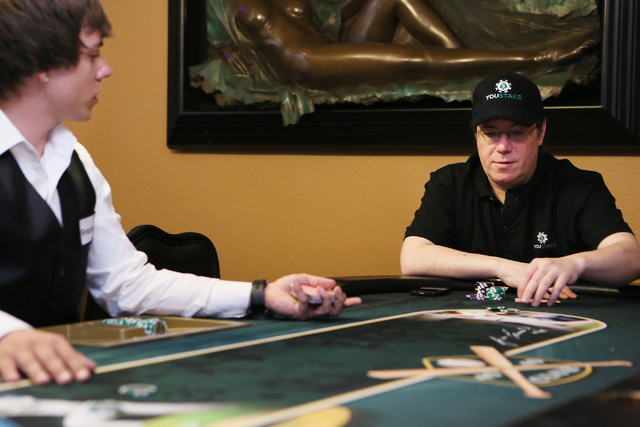 Professional poker player Jamie Gold, right, plays in a heads up tournament with a contest winner at baseball great Jose Canseco's home on Friday, June 26, 2015, in Las Vegas. Dealer Jordan Hufty, left, waits for Gold's move. Bradley Anderson, not pictured, won a contest that was hosted at the home of Canseco and sponsored by YouStake allowing him a chance to play for a seat in a World Series of Poker event. (Ronda Churchill/Las Vegas Review-Journal) 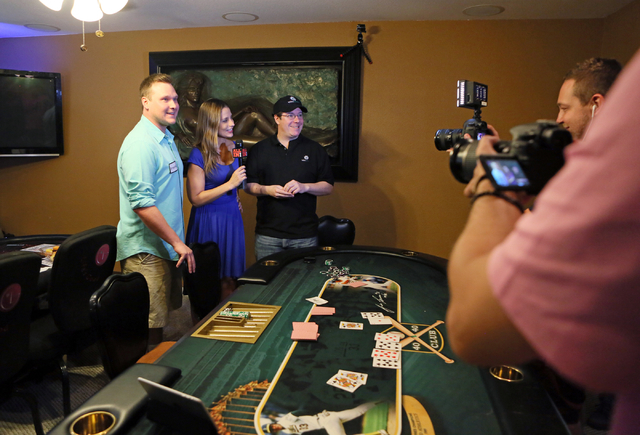 Bradley Anderson, left, and professional poker player Jamie Gold, third from left, take part in an interview with Lizzy Harrison, second from left, of All In Magazine, after playing a heads up tournament at baseball great Jose Canseco's home on Friday, June 26, 2015, in Las Vegas. Anderson won a contest that was hosted at the home of Canseco and sponsored by YouStake allowing him a chance to play for a seat in a World Series of Poker event. (Ronda Churchill/Las Vegas Review-Journal) 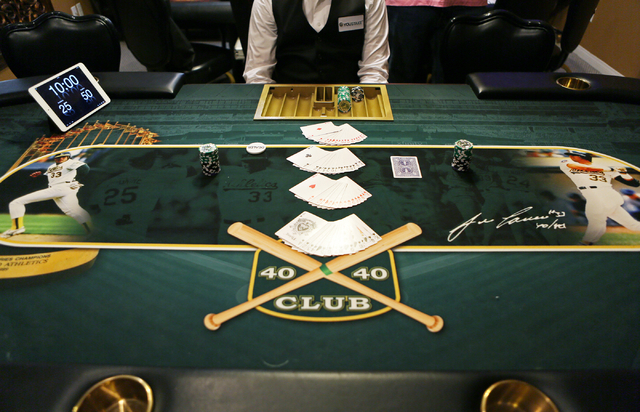 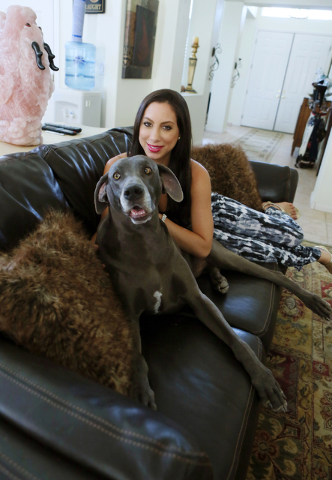 Leila Knight, the fiance baseball great Jose Canseco, and the couple's dog Bruce are shown at the couple's home on Friday, June 26, 2015, in Las Vegas. Knight hosted a heads up poker competition in the absence of her fiance who was delayed while traveling. (Ronda Churchill/Las Vegas Review-Journal) 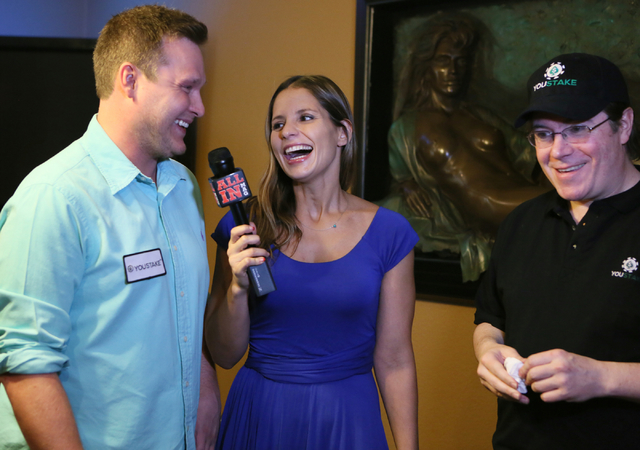 Bradley Anderson, left, and professional poker player Jamie Gold, right, take part in an interview with Lizzy Harrison, center, of All In Magazine, after playing a heads up tournament at baseball great Jose Canseco's home Friday, June 26, 2015, in Las Vegas. Anderson won a contest that was hosted at the home of Canseco and sponsored by YouStake allowing him a chance to play for a seat in a World Series of Poker event. (Ronda Churchill/Las Vegas Review-Journal)

The young woman from the poker website called to apologize about the short notice. But there was going to be this celebrity card game at Jose Canseco’s place on Friday morning, and would I like to attend?

You’d be a fool to pass that up.

It reminded me of a chance meeting a pal and I had with Max Baer Jr. This was a few years back at the CES show, and we asked Jethro what he was doing in town, and he said he was heading over to the adult entertainment wing to scare up a (party with girls) for later on.

Though we assured him we were big fans of all the Hillbillies, we weren’t invited. He kindly posed for a photo, though.

So I didn’t know what to expect at Jose Canseco’s place at 11 a.m.

My preconceived notion, given this was Canseco, was that maybe the party with girls would just be winding down. Or maybe he’d just be rolling out of the sack, and that his place would reek of Brut or some other inexpensive men’s fragrance you can buy at Albertsons.

I was greeted by Jamie Gold at the door.

Gold used to be a Hollywood agent; his clients included Jimmy Fallon, Lucy Liu and Felicity Huffman, who was a Desperate Housewife and was nominated for an Oscar. So far, so good.

But Gold is better known now as the 2006 World Series of Poker Main Event champion, for which he pocketed $12.1 million.

He said he has known Jose Canseco for about 10 years, though he couldn’t remember how or where they met. I imagine that happens a lot with those who are introduced to the baseball Bash Brother.

There were about a dozen of us on the list, including a film crew. But Gold said, sorry, Jose is stuck in Pittsburgh, at the airport, that he had been participating in a home run hitting contest with some independent league or semipro team based near the Three Rivers.

The whole thing came as a surprise to Leila Knight, who has been living with Canseco for eight years. She said Jose had mentioned the celebrity poker game in passing, but didn’t mention it was on for 11 a.m. Friday, until he called from Pittsburgh at about 10:45.

Jose’s girl was wearing a black crop top and printed trousers and sandals, and she was totally down to earth and hospitable given the circumstances. She said all of us poker people should come right in.

Except for a bag of golf clubs in the foyer, the house was tidy.

The upstairs den had been converted into a poker room with two tables. One was custom made, with green felt and gold accents, per the Oakland A’s colors. Pictures of Jose on the felt proclaimed him baseball’s first 40-40 man: 40 home runs, 40 stolen bases in the same season.

There were, like, a bazillion bedrooms. Lots of carpets from the Far East, or with a Far Eastern design. A portrait of Jose’s Cuban mother, in the living room. A couple of brass sculptures of topless women. No baseball memorabilia. That poker table was it.

There were lots of pictures of Jose and Leila on the walls. In almost all of them, they are holding hands, or he has a big paw draped over her shoulder, or they are kissing.

Leila remembered where she met Jose. It was at the Playboy mansion, where she was a body paint model and he was … well, probably looking for a good time. But judging from their home, they now live like a lot of couples who have been together awhile.

They have five dogs.

Four were locked in a spare bedroom because they bark at strangers. Bruce, Jose and Leila’s 7-year-old chocolate-colored Great Dane-Weimaraner mix, mostly laid close to Leila and tried to stay out of the way of the poker people.

Gold said believe it or not, Jose has some good business ideas — they both are involved with YouStake.com, a website at which poker enthusiasts can sign up to sponsor Gold and other top poker players — or celebrities such as Canseco — in tournaments. The player usually gets to keep about 40 percent of his winnings under these arrangements; the sponsors get 60 percent.

Canseco has this deal that if you stake him a certain amount, he’ll have dinner with you, provided he doesn’t get stuck in Pittsburgh.

The charity event was Jamie Gold in heads-up hold ’em vs. one of his admirers, a University of Montana grad named Bradley Anderson.

Anderson said he was a big fan of Bobby Hauck, who left Montana to coach football at UNLV.

So had I any money, it would have been on Jamie Gold.

The former WSOP kingpin needed roughly 10 minutes to take the kid’s comped $1,000 buy-in. But Gold said YouStake.com would ante up for Anderson to play for some big money at the WSOP, anyway. The Griz kid thought that was pretty cool.

On the way out, I asked Leila if the Mormon kids ever knocked on the door, asking for Jose’s autograph, or if he could come out and play and knock one clear over those tall spires.

She said no, but that when they first moved in, the Mormon kids would knock on their door and ask if they could do the couple’s laundry.