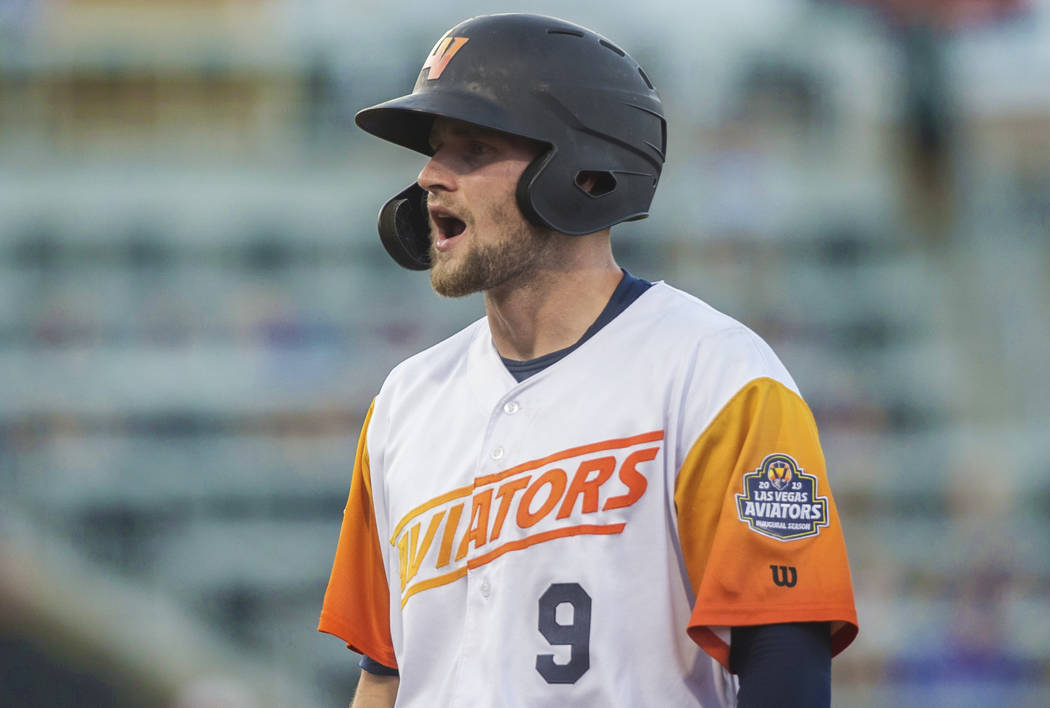 Las Vegas Aviators first baseman Seth Brown (9) pumps up his teammates after singling in the bottom of the first inning during the Vegas' home game against the New Orleans Baby Cakes at Las Vegas Ballpark on Wednesday, July 31, 2019, in Las Vegas. (Benjamin Hager/Las Vegas Review-Journal) @benjaminhphoto 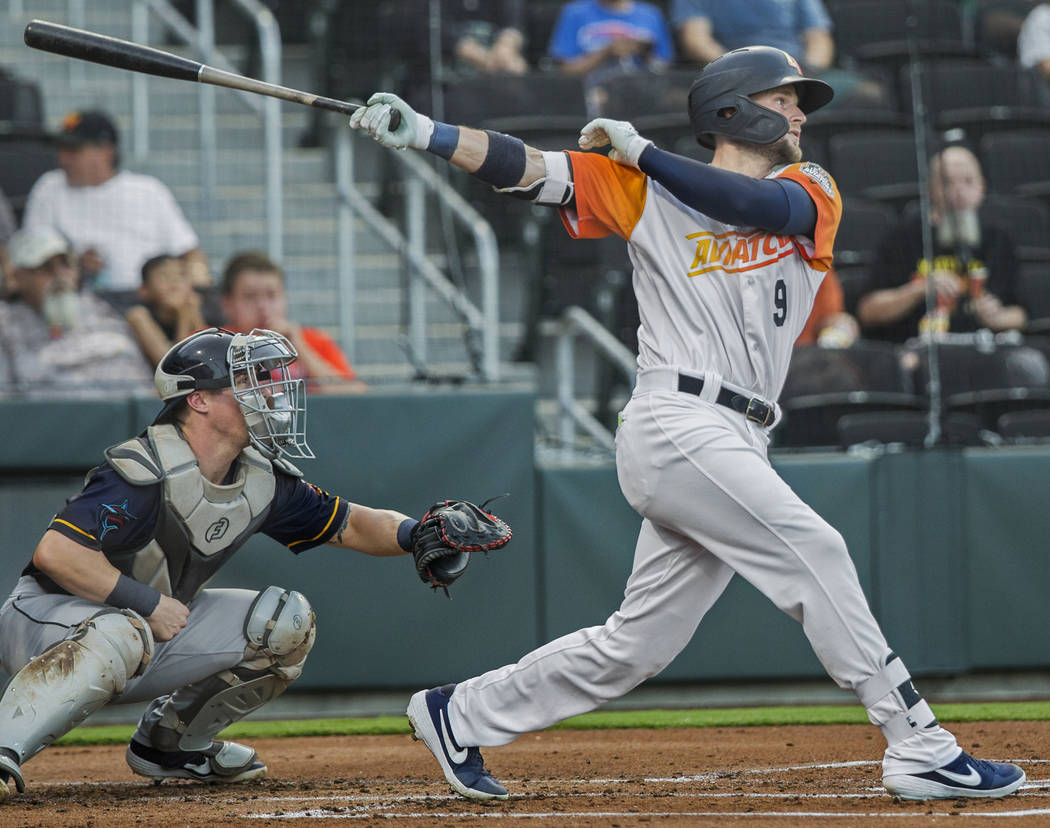 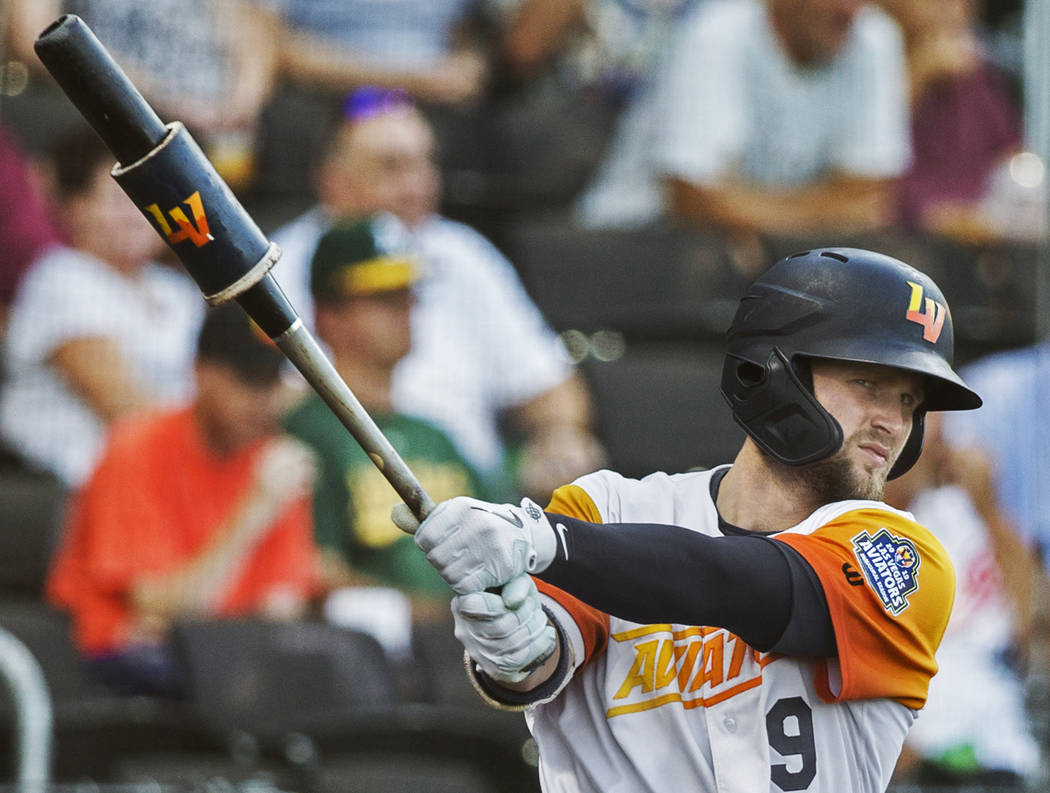 Las Vegas Aviators first baseman Seth Brown (9) warms up in the on deck circle in the bottom of the first inning during the Vegas' home game against the New Orleans Baby Cakes at Las Vegas Ballpark on Wednesday, July 31, 2019, in Las Vegas. (Benjamin Hager/Las Vegas Review-Journal) @benjaminhphoto 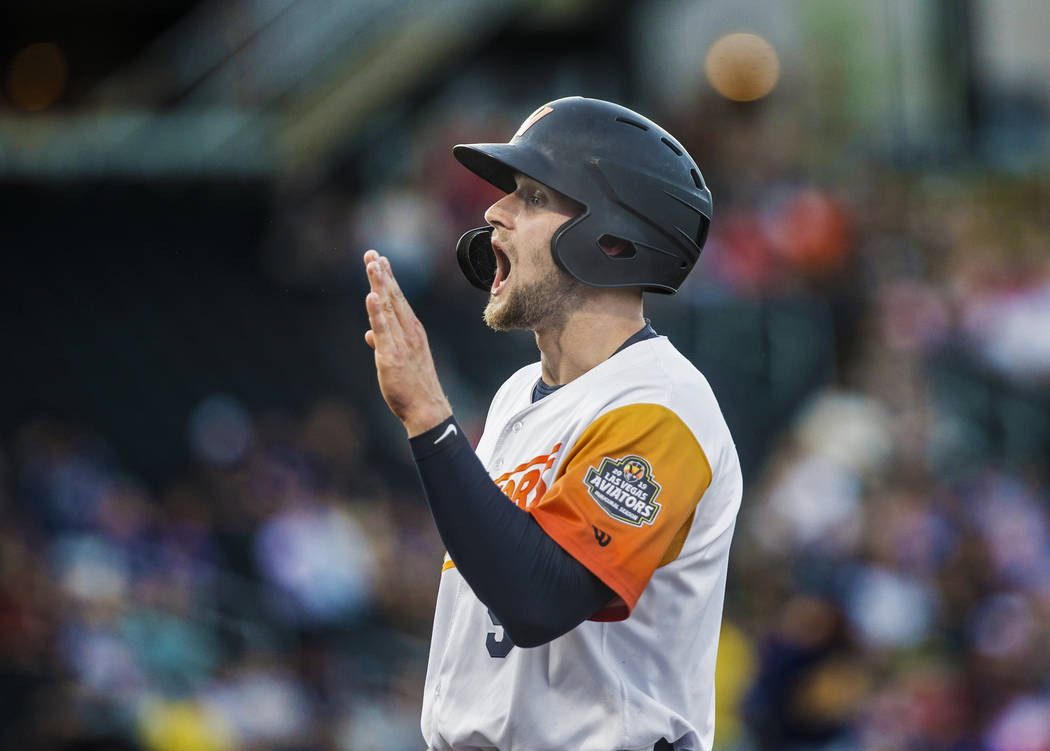 Las Vegas Aviators first baseman Seth Brown (9) signals back to his teammates after singling in the bottom of the first inning during the Vegas' home game against the New Orleans Baby Cakes at Las Vegas Ballpark on Wednesday, July 31, 2019, in Las Vegas. (Benjamin Hager/Las Vegas Review-Journal) @benjaminhphoto 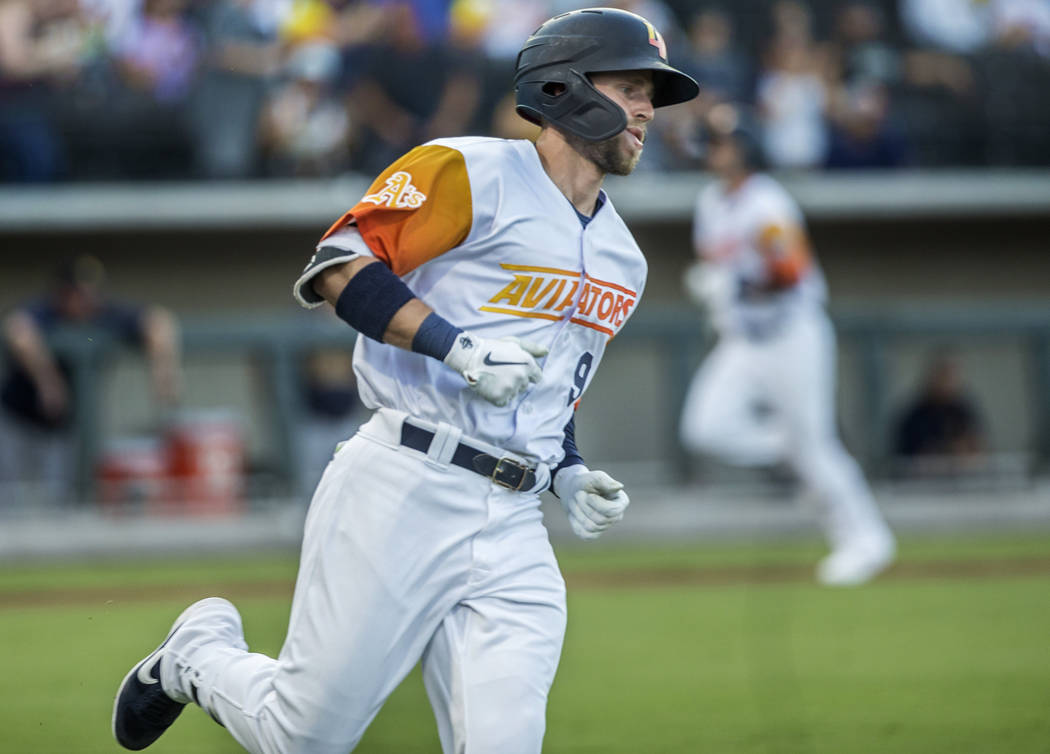 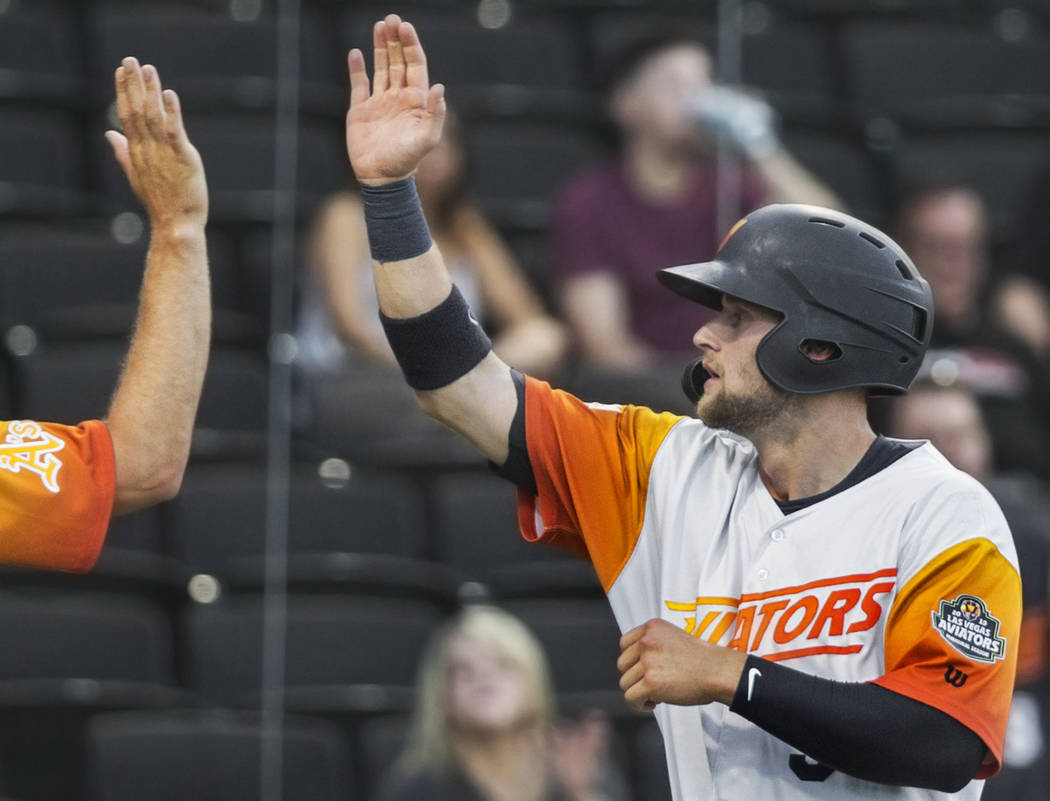 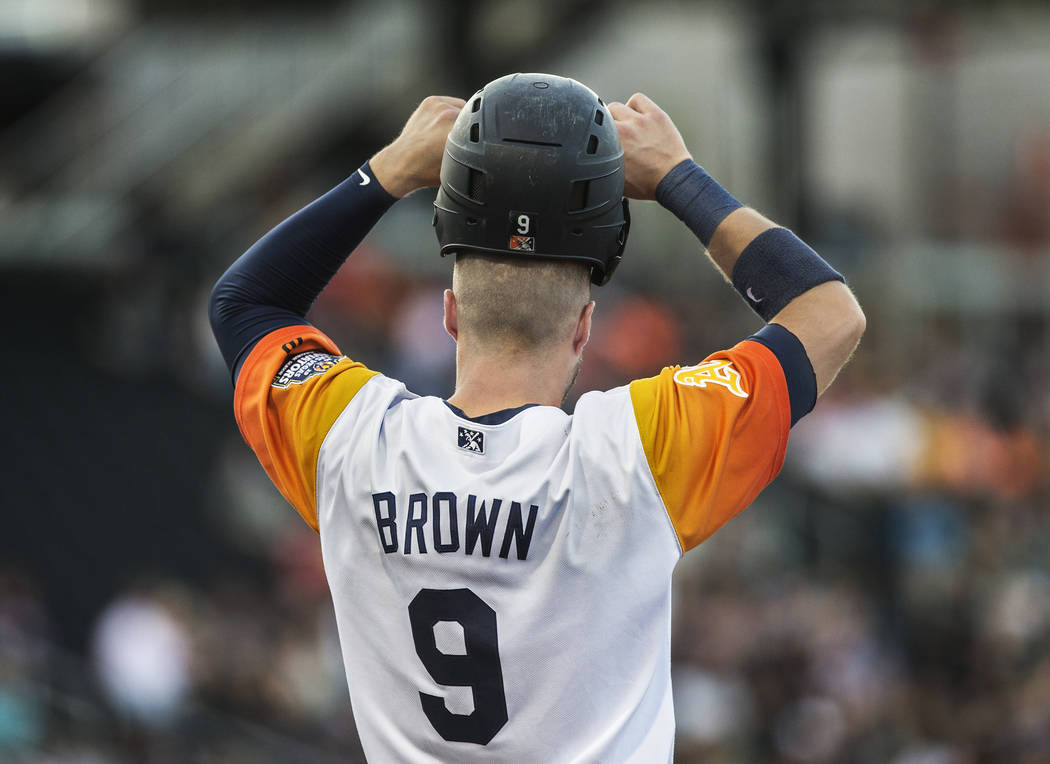 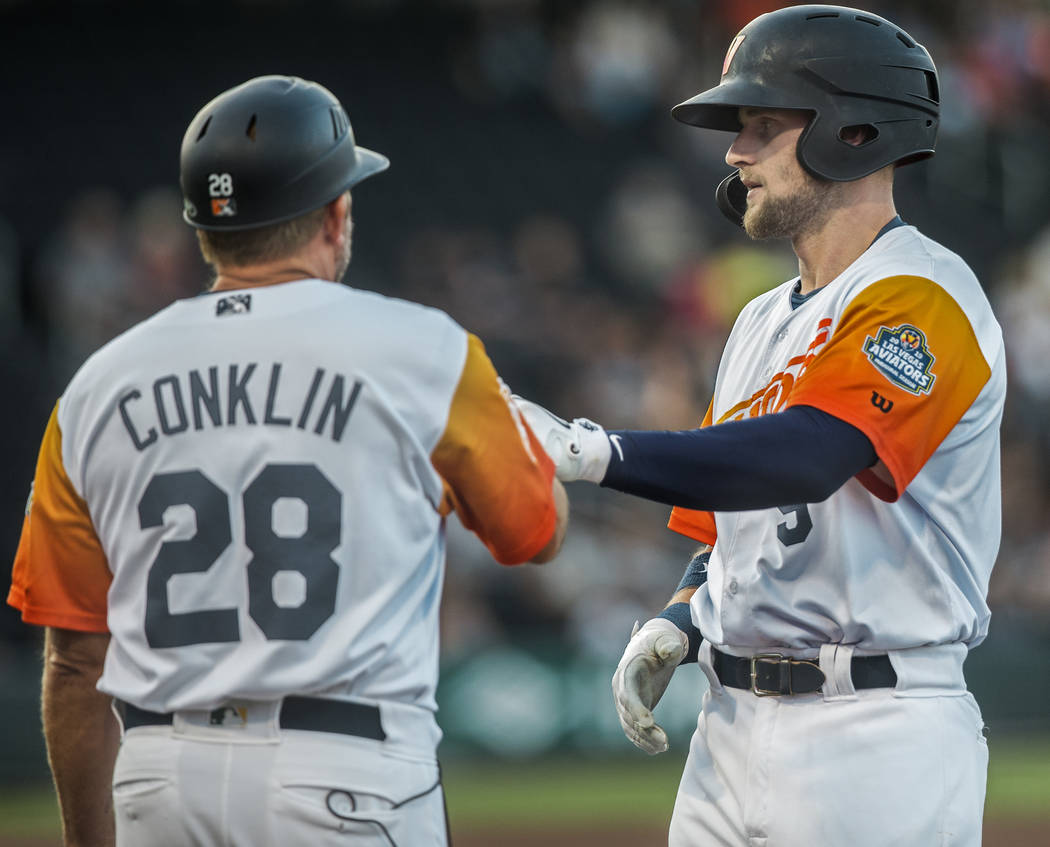 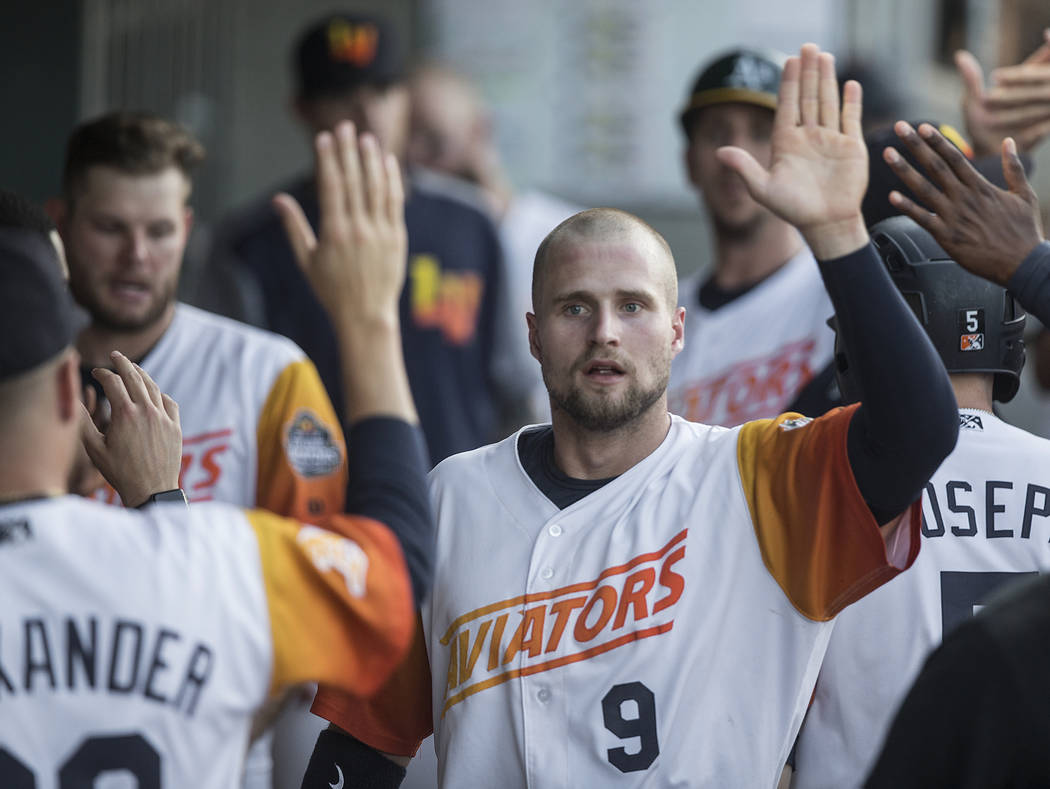 The Aviators returned home this week having placed a new single-game home run record and a lease on a playoff berth in a collective hip pocket where smokeless tobacco once was carried.

Affable first baseman Seth Brown, the Pacific Coast League player of the week who specializes in turning baseballs into majestic 410-foot arcs, says you can attribute his part to a scenic road overlooking Lewiston, Idaho.

It’s not to be confused with the Carefree Highway in Arizona that inspired a hit song by the Canadian troubadour Gordon Lightfoot, for the only thing that slips away on the Spiral Highway is one’s breakfast.

Sometimes called the Old Lewiston Grade, the Spiral Highway was constructed in 1917. It consists of 64 curves laid down over 7.3 miles of switchbacks and sheer drops. It’s where guys in leather jackets and slicked-back haircuts raced souped-up Lincolns and Cadillac sedans, though Charlie Ryan changed the lyric to Grapevine Hill to give the rockabilly tune “Hot Rod Lincoln” more of a drag race vibe.

When Seth Brown played at Lewis-Clark State College, his coach was Jeremiah Robbins, who looked like a Marine drill sergeant and structured workouts accordingly. Robbins made the Warriors rise at dawn to run Spiral Highway when there was snow on it.

“The first month, there wasn’t a day I didn’t puke,” Brown said.

“His goal was to get us physically exhausted every day,” the Las Vegas slugger said with a grin more twisted than the Spiral Highway. “You weren’t allowed to walk, ever. You weren’t allowed to sit down, ever. Being able to conquer that mentally and still perform — that place changed me that way.”

Baseball is a game in which even the best players fail seven times in every 10 at-bats and even the best teams lose 60 games in a season. These are truisms of which Jeremiah Robbins, the Great Santini among small-college baseball coaches, apparently had never heard.

“At the beginning of the season we had a four-game series with this team and split — which was a big no-no,” Brown said of a mentality that has helped Lewis-Clark win 19 NAIA national baseball championships and send 16 players to the big leagues.

“He took our jerseys away. The next week we had 3 a.m. tryouts. It’s 10 degrees out, and the grass is crunching because it’s so cold. We got the ATEC fastball machine cranked up to 98 mph and he gave us 32-inch Baum (composite) wooden bats, because he took all of our bats away.

“It was a mixture of games, running and puking. But looking back, those are some of my favorite memories.”

No pain, no gain, no getting picked in the 19th round by the Oakland Athletics.

Seth Brown was telling these stories after batting practice Tuesday. It was 108 degrees in the dugout shade at Las Vegas Ballpark and Blast Furnace. Jim Gemma, the team’s media liaison, said there was a cool spot near the climate-controlled batting cages under the stands where we could talk.

Brown said thanks, but we could just do the interview in the dugout.

Having run Spiral Highway when snot turns to icicles, 108 degrees in the shade seemed like a bigger piece of cake than the PCL pitching on which he has been feasting.

A September call-up to the A’s beckons, though it could be delayed if the surging Aviators make the playoffs — they are one game behind El Paso in the Pacific Southern Division — and the sabermetrics types in Oakland decide not to break up the Aviators.

“As much as everybody wants to accomplish that dream, you have to be happy where you’re at,” Brown said of getting major league per diem as wavy lines of heat rose from the bullpens. “For me coming out here every day and playing in ballparks like this one, it’s amazing to be a part of.”

Brown went 1-for-5 in a 8-7 loss to New Orleans on Tuesday, which for him these days is considered something of a slump.

It’s a good thing he still isn’t playing for Jeremiah Robbins and Las Vegas doesn’t have a Spiral Highway, or he might have been up awfully early on Wednesday.