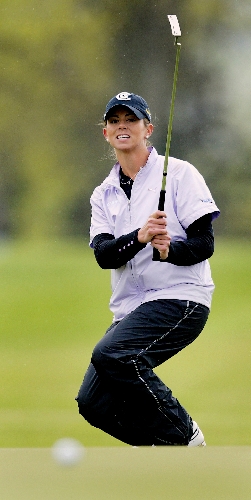 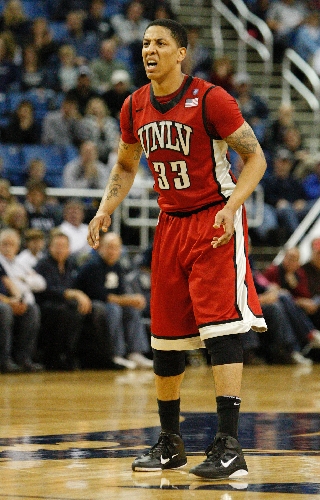 10. JIM LIVENGOOD IS NOT LOCAL.

How many were hoping for somebody in our own backyard to finally get a crack at running the UNLV athletic program? How many thought Jim Livengood had worn out his welcome at Arizona and was coming to town to reprise former AD Charlie Cavagnaro’s routine of getting paid a handsome salary for playing golf?

But I must defer to Mister Ed (Graney) on this one. Livengood has shown remarkable energy for a man who has been there, done that. He believes the athletic program needs to become self-sufficient, and that the Mountain West television deal stinks.

9. THE SADDEST KIND OF SUDDEN DEATH.

Cover-girl looks, massive potential, a swing that made the men at the country club envious … 25-year-old Henderson resident Erica Blasberg seemingly had everything going for her.

On May 10, she was found dead at her home; the Clark County coroner’s office ruled her death a suicide.

People around the neighborhood said they’d see Blasberg walking her dog and that she’d smile and wave, but that nobody really knew her.

Swallows return to San Juan Capistrano. Pitchers and catchers report to spring training. Spring turns to summer and summer turns to fall and fall turns to winter and Bishop Gorman turns it all into championships.

At halftime of the first game of the Bobby Hauck Era, UNLV trailed Rose Bowl-bound Wisconsin, 17-14. Then the smoke dissipated and the mirrors came crashing down. Julius Caesar left the building. The Rebels lost, 41-21. The Rebels would lose 10 more times en route to a 2-11 season.

OK, they take time and players.

I nearly forgot that Jim Strong once posted a winning season at UNLV.

Oh yeah — Denny Hamlin doesn’t like him, which wouldn’t be so bad, if Hamlin wasn’t his teammate.

In World Cup soccer, scoring a goal is more difficult than fitting a square peg into a round hole while blindfolded. Especially against the defensive-minded Italians.

Had Herc scored against Ghana, perhaps the U.S. would have made it to soccer’s Final Four, or whatever they call it. And then perhaps soccer would be as big in this country as say, hockey. And then instead of getting together every four years to watch it on TV with guys named Nigel who drink funny-colored beer and make fun of the French team, maybe we’d watch soccer whenever there wasn’t a real football game on TV.

So if soccer doesn’t become bigger than hockey, blame it in Herculez.

4. FLOYD MAYWEATHER JR. GOES TO JAIL FOR BEATING UP PEOPLE.

Mayweather was arrested on myriad charges stemming from a domestic violence case. He was arrested a second time after he cuffed around a security guard over parking violations. The justice of the peace was reluctant to bring him in, and I guess that’s understandable.

Mayweather hasn’t been tried on those charges. But he’s already been convicted of ducking Manny Pacquiao in another of these megafights that supposedly would save boxing from the evil clutches of mixed martial arts and other up-and-coming sports, such as lingerie football.

3. SHAKE, RATTLE AND FORGET ABOUT AN AUTOMATIC BCS BID.

The Mountain West essentially traded Utah for Boise State, which was sort of like trading IBM stock for gold bullion. Then the MWC traded Brigham Young and Texas Christian for UNR, Fresno State and Hawaii of the crumbling Western Athletic Conference, which was sort of like the Tigers trading John Smoltz to the Braves for Doyle Alexander or John Lennon swapping the super model of his choice for Yoko Ono.

If Instant Karma doesn’t get you, the lure of BCS dollars certainly will.

I did. If you don’t think he belongs, you weren’t watching the Rebels lose to UC Santa Barbara at home when they made only 6 of 29 shots beyond the 3-point arc.

1. THE NOT SO MAGICAL SEASON OF CHRIS SHEFF.

There was so much collateral damage from Bryce Harper’s year of success at College of Southern Nevada that Arnold Schwarzenegger wants to make another movie.

Harper left CSN early with $9.9 million in his back pocket, courtesy of the Washington Nationals. His coach Tim Chambers left early for his dream job, the head coaching gig at UNLV. CSN promptly named Chris Sheff, the Tony La Russa of local high school baseball, its new coach — and even more promptly got put on double-secret junior college probation after Sheff made players pay for training sessions and pizza rolls.

The Unholy Trinity is now complete. Sheff joins former UNLV basketball recruits Lloyd Daniels and Lamar Odom for bringing down a local program before ever putting on a uniform.