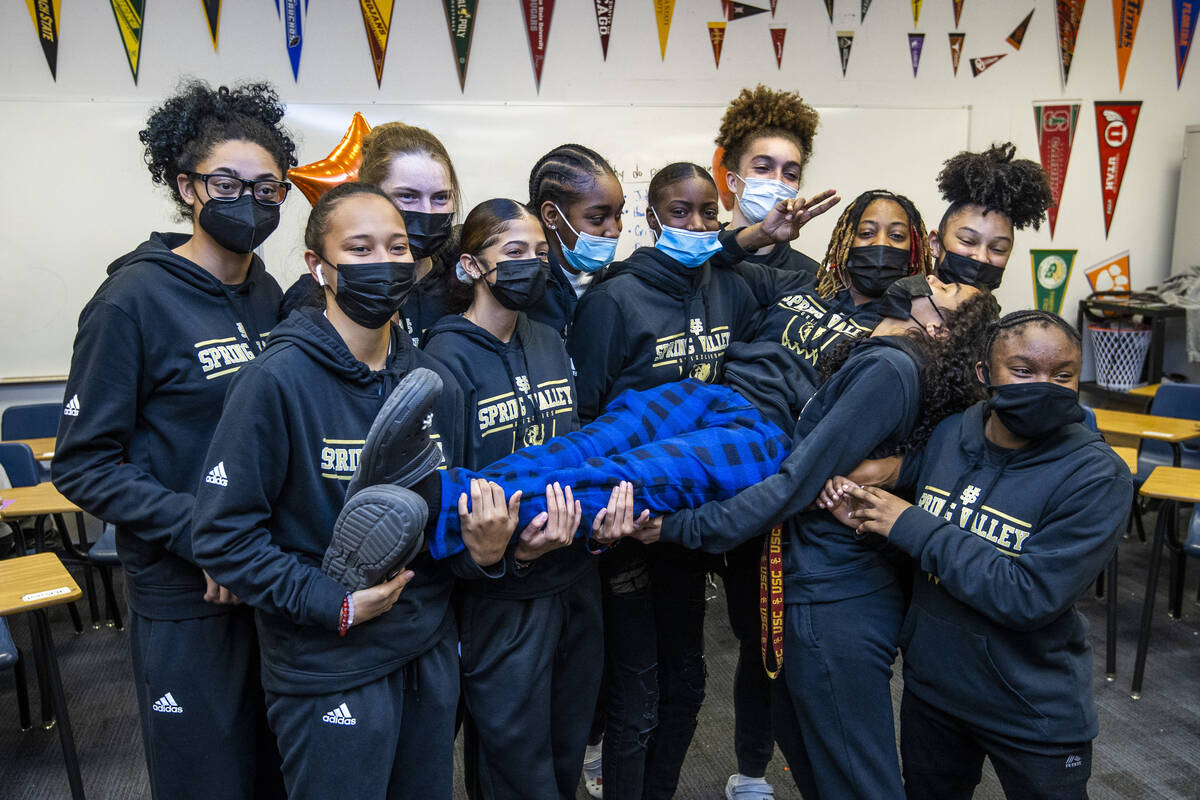 Spring Valley High School basketball guard Aaliyah Gayles, right, is held by her teammates during a group photo after she is announced as a McDonald's All-American while watching the selection show on Tuesday, Jan. 25, 2022, in Las Vegas. (L.E. Baskow/Las Vegas Review-Journal) @Left_Eye_Images 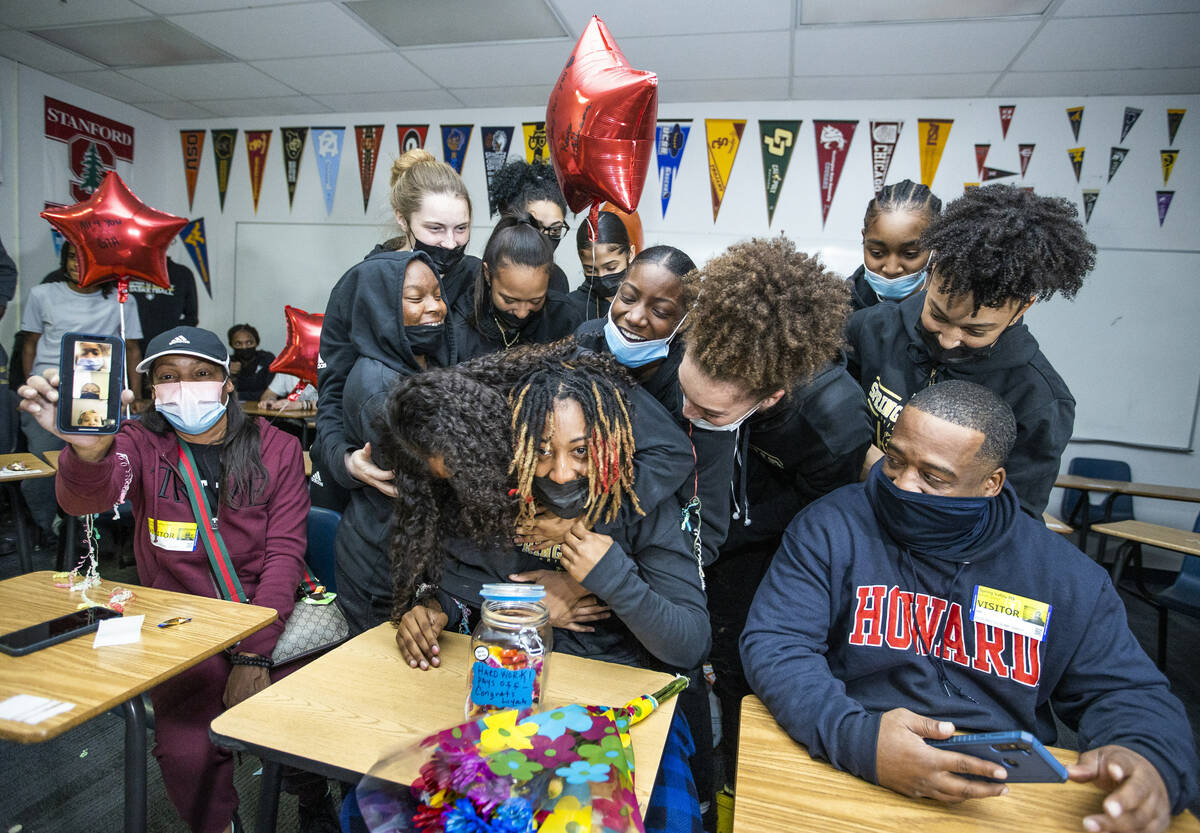 Spring Valley High School basketball guard Aaliyah Gayles, center, is hugged by teammates while sitting between her parents Malkia Lockett, left, and Dwight Gayles, right, after she is announced as a McDonald's All-American while watching the selection show on Tuesday, Jan. 25, 2022, in Las Vegas. (L.E. Baskow/Las Vegas Review-Journal) @Left_Eye_Images 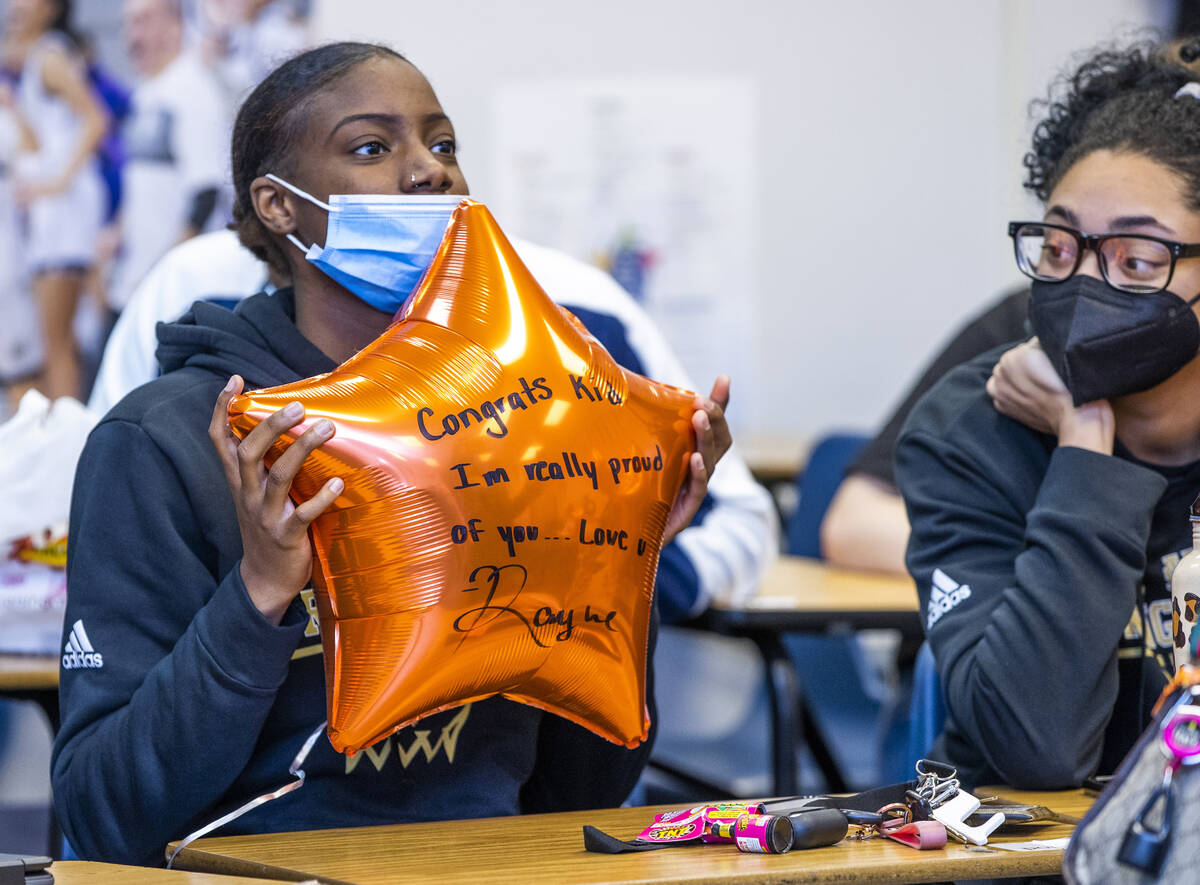 A teammate shows off her best wishes to Spring Valley High School basketball guard Aaliyah Gayles during a watch party of the McDonald's All-American selection show where is expected to be chosen on Tuesday, Jan. 25, 2022, in Las Vegas. (L.E. Baskow/Las Vegas Review-Journal) @Left_Eye_Images 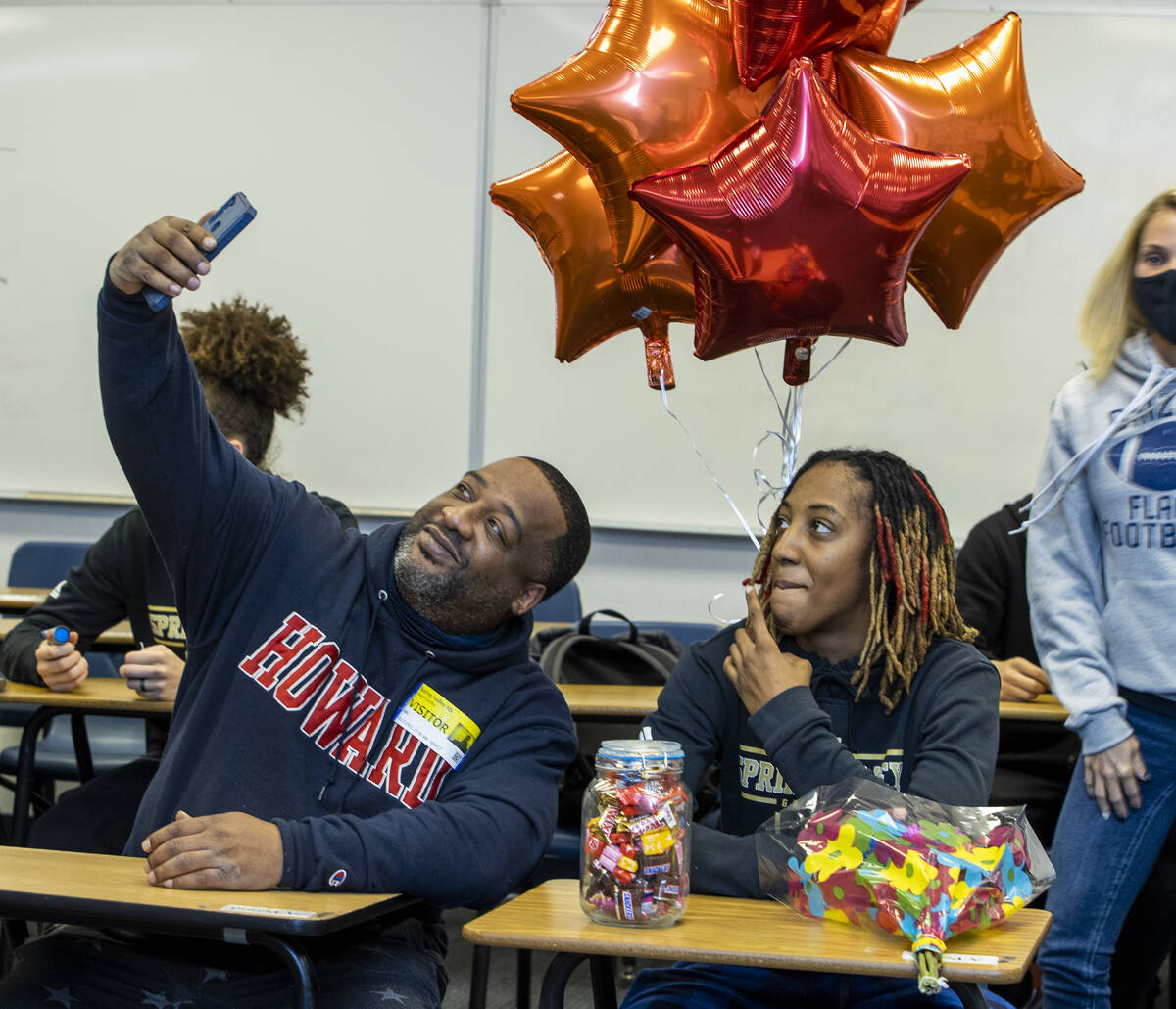 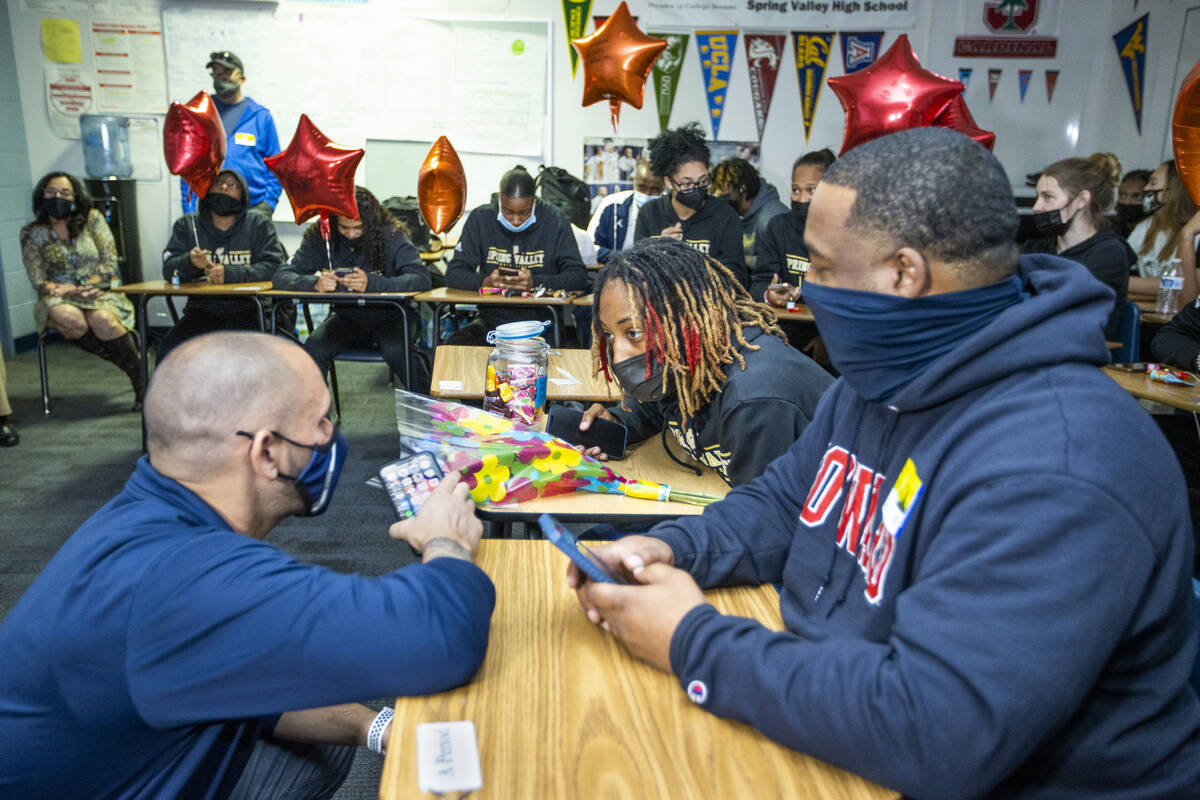 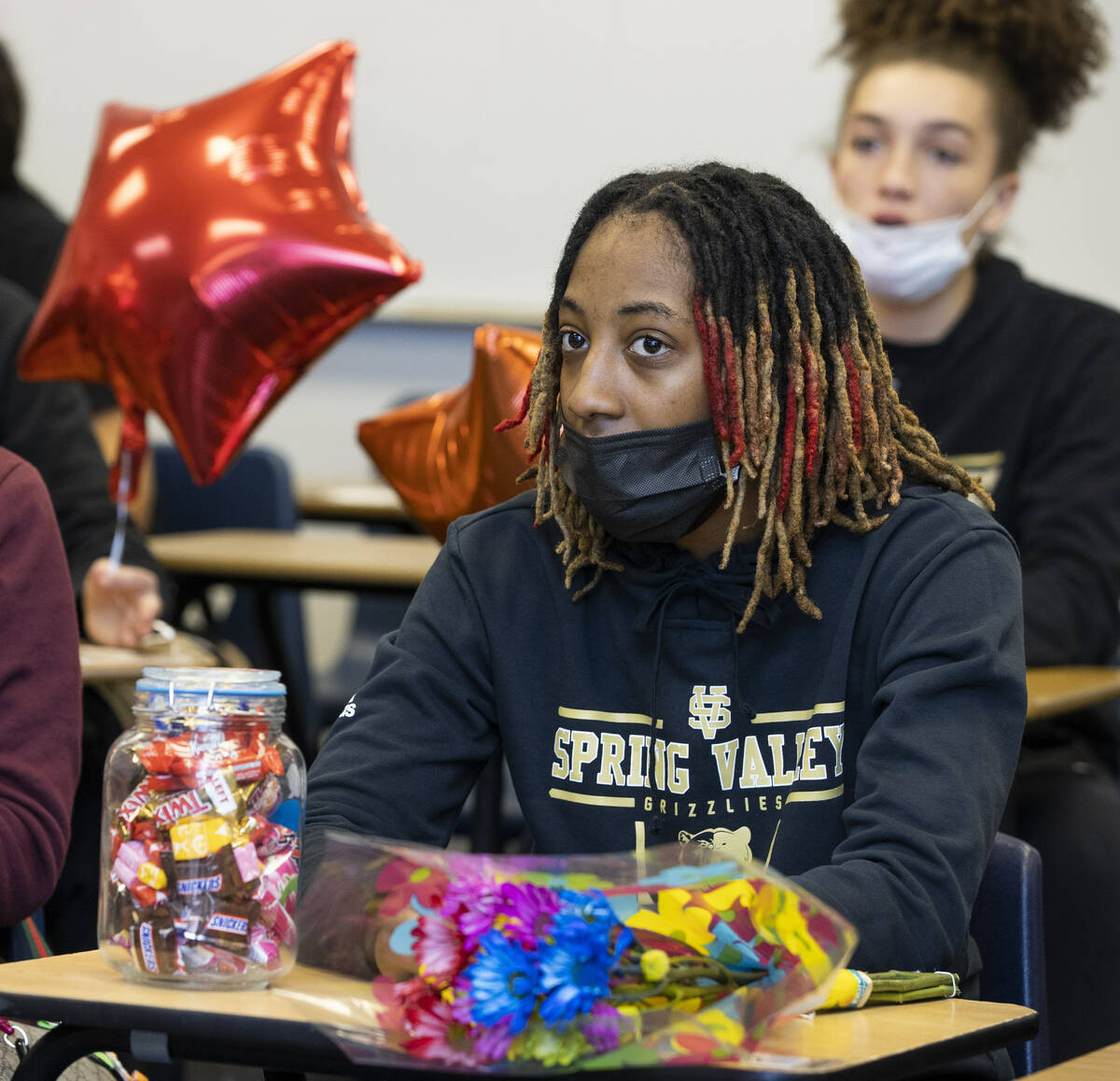 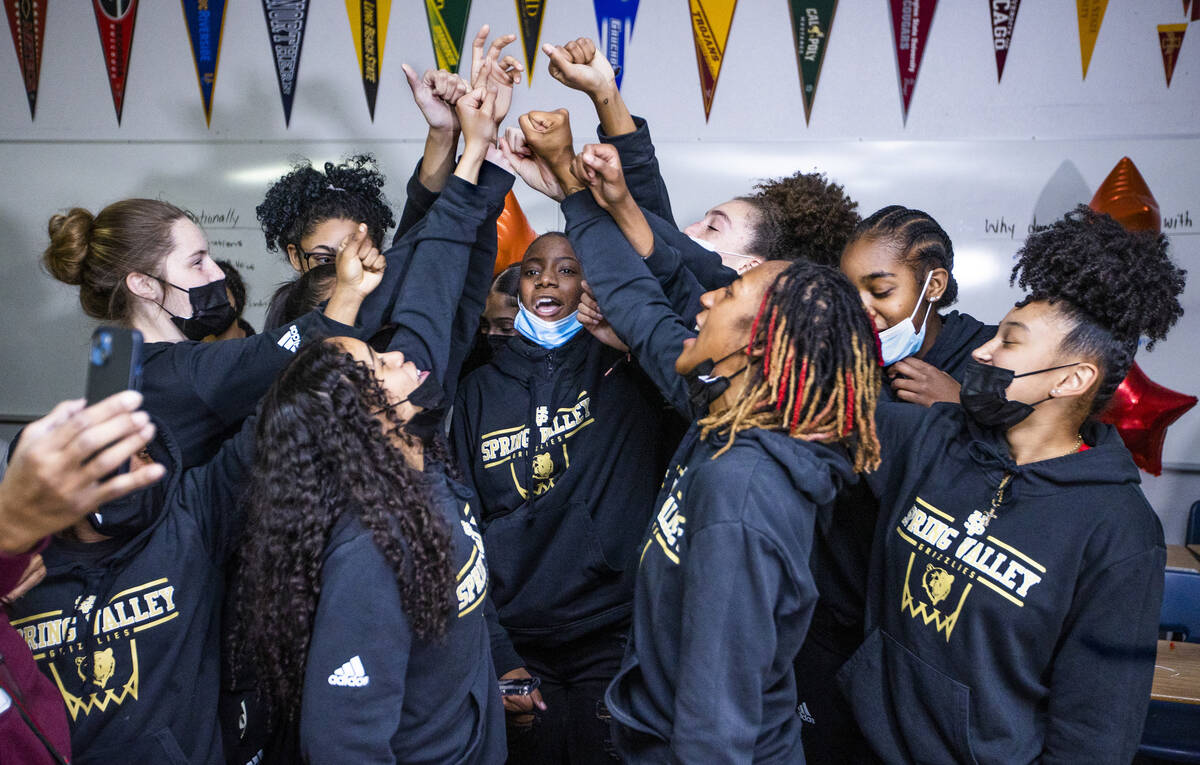 Spring Valley High School basketball guard Aaliyah Gayles, center right, jumps comes together in a cheer with her teammates after she is announced as a McDonald's All-American while watching the selection show on Tuesday, Jan. 25, 2022, in Las Vegas. (L.E. Baskow/Las Vegas Review-Journal) @Left_Eye_Images

It was about 15 minutes past noon Tuesday, and all but one member of the Spring Valley girls basketball team were seated in a semicircle in Room 800 at the high school where their coach, Billy Hemberger, teaches a class called Sports Leadership.

As usual, one of the Lady Grizzlies was front and center.

Point guard Aaliyah Gayles sat in the middle of three desks that had been placed in front of the semicircle. She was flanked by her father, Dwight, and her mother, Malkia. The collective gaze of all in attendance was fixed on the audio visual screen in front of the classroom, as if the vaunted Centennial Bulldogs might burst from it at any second.

But the showdown for girls basketball supremacy in Southern Nevada doesn’t happen until a week from Thursday.

The Grizzlies and Gayles’ loved ones, coaches and other well-wishers had gathered to watch ESPN’s “NBA Today,” during which the announcement of the McDonald’s All-America teams — the high school basketball equivalent of the Oscars — would be made.

Gayles is ranked No. 8 nationally among senior recruits, and McDonald’s honors 24. So all on hand were pretty confident she was a lock.

But Josh Allen and the Buffalo Bills were feeling pretty confident with 13 seconds remaining in Sunday’s AFC playoff game, too.

As JJ Redick, Kendrick Perkins and Richard Jefferson continued to prattle about whether Chris Paul should be in the conversation for MVP and the Suns had the best backcourt in the NBA and LeBron this and LeBron that and yada, yada, yada, Gayles’ teammates groaned.

This wasn’t what they came to hear. This was more sleep-inducing than Mr. Hand’s American History class at Ridgemont High.

It wasn’t until 12:33 that the identities of ESPN’s top four ranked female high school basketball players appeared on screen, followed by the names of the other 20 McDonald’s All-Americans.

Gayles, who averages 13.8 points and leads Spring Valley in assists, steals and email from college suitors, shrieked when she saw hers among them.

Calm and collected on court, she bolted from her desk and lapped the semicircle where her teammates were seated. Hugs were exchanged, palms were slapped, balloons shaped like stars with heartfelt or inspirational messages inscribed in magic marker fluttered in her wake.

Somebody pass the Big Macs — Aaliyah Gayles was a McDonald’s All-American.

“Once I saw my name up there, it got me hyped,” the Southern California commit said when the little classroom finally quieted enough for questions and answers. “It’s very exciting to have the people I love here with me to celebrate with me because I’m not alone on my journey.”

Before the desks were rearranged, a couple of those who have been in lockstep with Gayles on her basketball odyssey spoke about what made her special beyond her statistics and skills and the way she uses them to settle an offense.

“She is insanely humble; she doesn’t enjoy the glitz and glamour and the limelight and all that stuff,” Hemberger said. “She handles her business and prides herself on knowing where her roots stem from. So if there was one word that I could use to define her, it is loyalty.”

Dwight Gayles said all of his children were athletically inclined “but McDonald’s All-American — it doesn’t get any better than this.”

Aaliyah’s dad was a football player at Dominguez High in Compton, California, at the same time Tayshaun Prince, the former Kentucky and NBA defensive whiz, was being feted for making the 1998 McDonald’s All-America squad.

“She’s got two brothers and one sister, and the whole family pretty much is talented. But she’s the one,” he said when asked about what made Aaliyah special and when he knew it.

“Five years old. I put a basketball in her hands. And she hasn’t put it down since.”