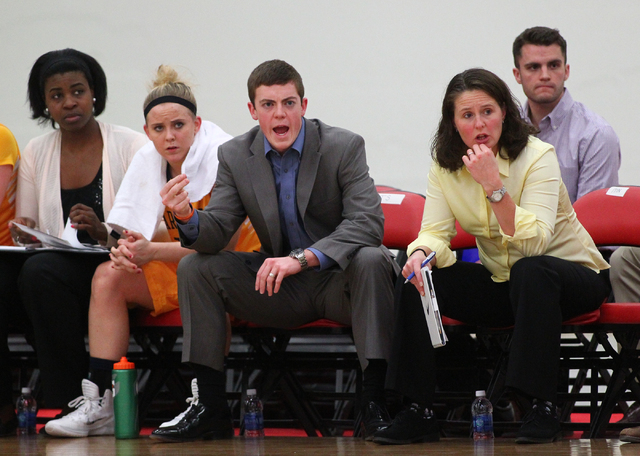 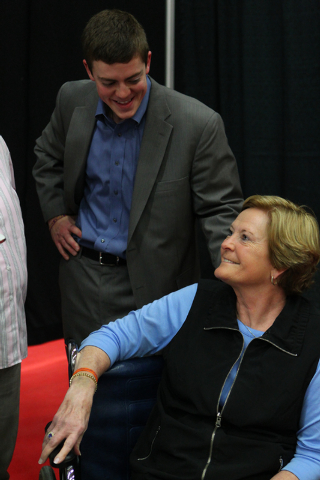 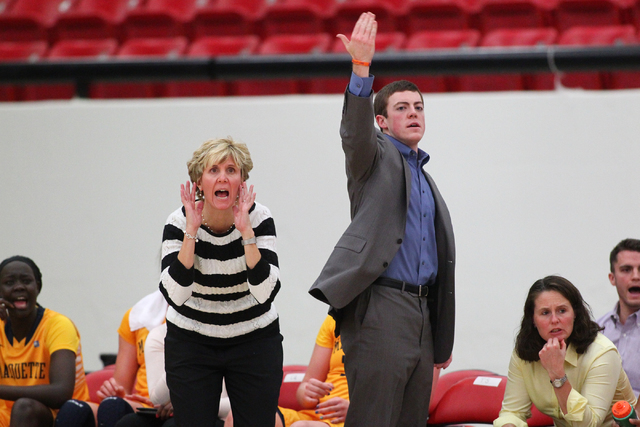 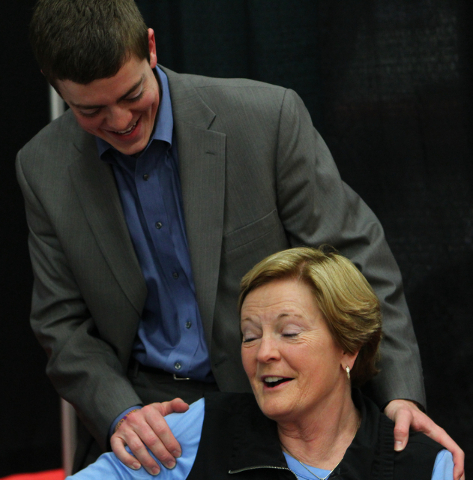 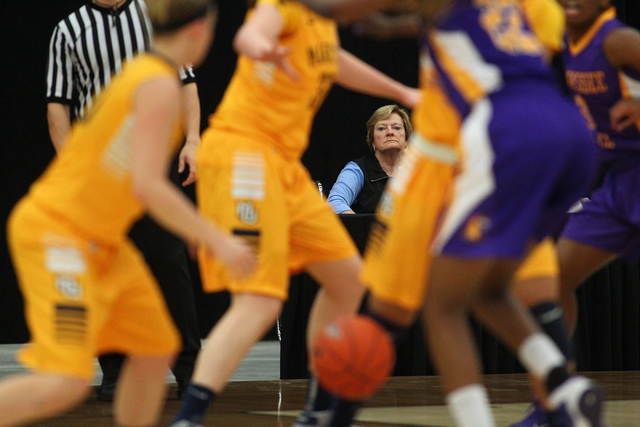 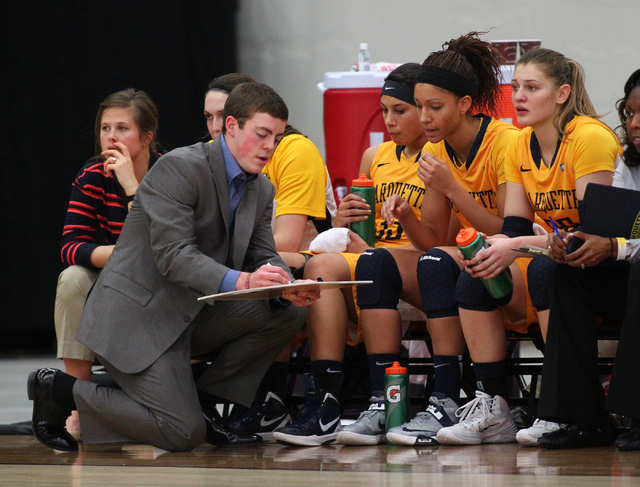 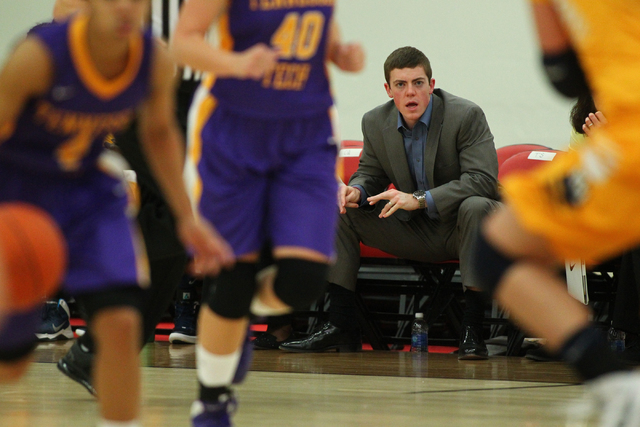 There was a Summitt meeting in Las Vegas on Friday as day turned into night. It happened behind the big black curtain at the South Point Arena, after the Marquette women beat Tennessee Tech in the Las Vegas Shootout.

Pat Summitt was there. So was her son, Tyler. Hall of Famer Billie Moore. And Adam Waller, director of community relations for the Pat Summitt Foundation, which is trying to find a cure for Alzheimer’s disease.

Among Pat Summitt and Tyler Summitt and Billie Moore there were 1,534 victories and 10 national championships behind that big black curtain.

Pat Summitt won eight national titles at Tennessee and 1,098 games, more than any other college basketball coach, male or female, who ever lived. More than Bob Knight. More than Coach K.

Billie Moore, Pat Summitt’s coach on the first U.S. Women’s Olympic basketball team in 1976, won 436 games and two national championships, one at Cal State Fullerton and one at UCLA.

Tyler Summitt hasn’t won any games or national titles, but he’s working on it. Pat Summitt’s only child is in his second season as an assistant coach for the Marquette women.

The way many see it, 23-year-old Tyler Summitt, who appears even younger than that — he still has rosy red cheeks, for cryin’ out loud — has something more enduring than wins and national titles, as nice as those are for a coach, and for a personable young man who aspires to be a head coach some day soon.

He has a special bond with his mother.

It began before he knew it, from the day he was born — from long before the day he was born, actually, because Pat Summitt had suffered seven miscarriages before she gave birth to Tyler. During our conversation, Tyler Summitt must have mentioned his faith and God’s plan a half-dozen times. It’s understandable.

So Tyler Summitt always felt a closeness to his mother. He had a great relationship with his father, too, though his mom and R.B. Summitt divorced in 2007, when Tyler still was playing ball in high school.

“It was different,” he says about his childhood. “Instead of going to sleepovers, I was in locker rooms and at the end of the bench. Instead of going on field trips, I would be going on away games. People say I’ve been an assistant coach since I was 5 years old.”

But two years ago, when he was 21, he became more than that.

He was with his mom at the Mayo Clinic when the doctors told her the grim news. As she described it in her book, Pat Summitt had “a ticking time bomb” in her head. She knew it. She knew for as long as five years before that something was wrong.

When the doctors told her she had early-onset Alzheimer’s disease, she told Tyler at least it wasn’t cancer.

Then they didn’t talk about it for a long time.

That bothered Tyler until late one night, the story goes, when he walked into his mother’s room in tears, and he told her she didn’t have to go through this alone.

And from that night, she didn’t.

He was with her last week in Knoxville, too, when they unveiled a larger-than-life statue of his mom on the Tennessee campus. The two of them struggled to lift the shroud from the 8-foot-7-inch bronze likeness, and so one of the current Tennessee players, one of the really tall ones, had to help.

And when his mom was asked to say a few words, she did, and the first person she mentioned was Tyler, because Tyler is always there for her. Every step of the way.

Pat Summitt mostly talks in short sentences and smiles these days. When we spoke after the game behind the black curtain, she mostly replied to my questions with one-word answers. At 61, she still looks great. I kept expecting her to get after Chamique Holdsclaw or Tamika Catchings for not blocking out or not getting back on defense or something, that’s how good she looks.

At halftime, people kept coming up to her, to say hello, to shake her hand. Some were Tennessee Tech people. Pat Summitt may have forgotten some of the scores because of this terrible disease, but people back in Tennessee sure do remember them.

She watched her son coach basketball while sitting in a wheelchair under one of the baskets, because she recently had minor surgery on her ankle. By the end of the game, she had ditched the wheelchair. The determination still is there.

“The way that we look at it is that God has a plan,” Tyler Summitt said before introducing me to his mother. “We’re just gonna take one step at a time.”

There were so many things I wanted to ask his mom. But sometimes, as Pat Summitt knows, adjustments are called for. So Billie Moore mostly answered for her former player, except when I asked about Tyler’s budding career. And whether he might go on to be as successful as his mother, which, no offense to Tyler, ain’t gonna be easy.

You could hear the exclamation point at the end. And then it wasn’t about the 1,098 wins, or the eight national titles, or even about living with this terrible disease. It was only about a mother being proud of her son.