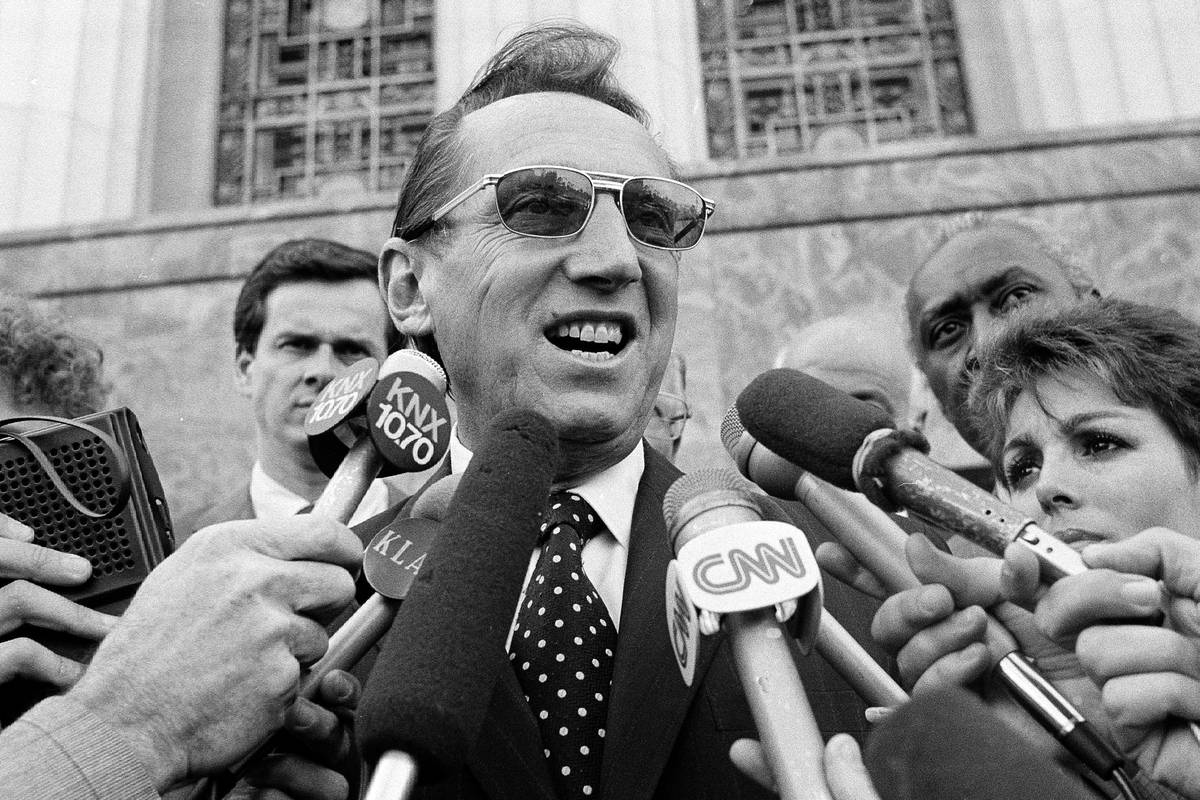 Los Angeles Raiders' owner Al Davis speaks to the media after a Federal Court jury ruled in favor of the team and the Los Angeles Coliseum in an antitrust suit against the National Football League, in Los Angeles, in this Wednesday, April 14, 1983, file photo. (AP Photo/Nick Ut, File)

Al Davis, the maverick Raiders patriarch, is back in the news, thanks to “Al Davis vs. The NFL,” an ESPN 30 for 30 documentary that debuted Thursday. Spoiler alert: It redefines “deep fake” in a way that Tim Brown or Fred Biletnikoff could not have imagined.

But if one has been waiting years to retell a story about Davis calling the newspaper office out of the blue one sunny Las Vegas morning, this would seem the time to do it.

Actually, the first voice on the line sounded matronly. It asked if I would hold for Mr. Davis.

“Mr. Davis? The only Mr. Davis with whom I’m familiar is the guy who owns the Oakland Raiders.”

The matronly voice then yielded to a gravelly one with a Brooklyn accent.

Al Davis mentioned my name and then his, and the football team he owned or generally partnered (whatever that means).

He said he had heard that I was “the kind of guy who gets stuff done in Vegas.”

What Davis wanted done was a story about Bob Blum, his longtime friend and one of the Raiders’ original play-by-play voices. This was around the time Blum was to be inducted into the Southern Nevada Sports Hall of Fame.

Truth be known, I was sort of planning to write about Blum anyway. But this is not something one tells Al Davis when he wants something done. It’s usually more wise to let him believe it was his idea.

Anyway, the story was written. And that is where I thought my one Al Davis story would end.

Turns out it was only beginning.

Weeks after the story ran, another phone call from the matronly voice was received. Mr. Davis was requiring that Bob Blum and I be his guests at an upcoming Raiders game. The choice of the game was ours.

It was a generous offer. But I didn’t have the heart — nor the guts — to tell the matronly voice it was against newspaper policy to accept a freebie to Oakland for a Raiders game of my choice.

So the Broncos game came and went, and then games against the Chargers, Jets, Falcons, Panthers, Chiefs and Patriots, and then my phone rang again, and there was another gravelly voice on the line.

“The old man will be insulted if you don’t accept his offer,” Bob Blum said. “It’s like the Godfather. You can’t refuse.”

By then there was only one home game remaining on the schedule.

And so Blum and I accepted Al Davis’ invitation, went to Oakland and watched the Raiders beat the Houston Texans 27-16. I’m not sure if this was considered an upset, but given JaMarcus Russell was the Oakland quarterback, it probably was.

Anyway, the newspaper had agreed quietly (so as not to offend Mr. Davis) to pay for my trip, provided I could find something to write about in Oakland. So I wrote about how when we arrived at the Oakland airport there was a stretch limousine waiting for us, and how Al Davis made a nobody sportswriter feel like Ernest Hemingway.

Another 10 years or so would pass before I had a chance meeting with his son, Mark, at a Las Vegas Aces game.

I found the Raiders’ new owner to be every bit as unassuming and generous with his time as the old one. I told him about the time the team’s previous owner had treated us like kings.

There was a tear in his eye when he told me that.