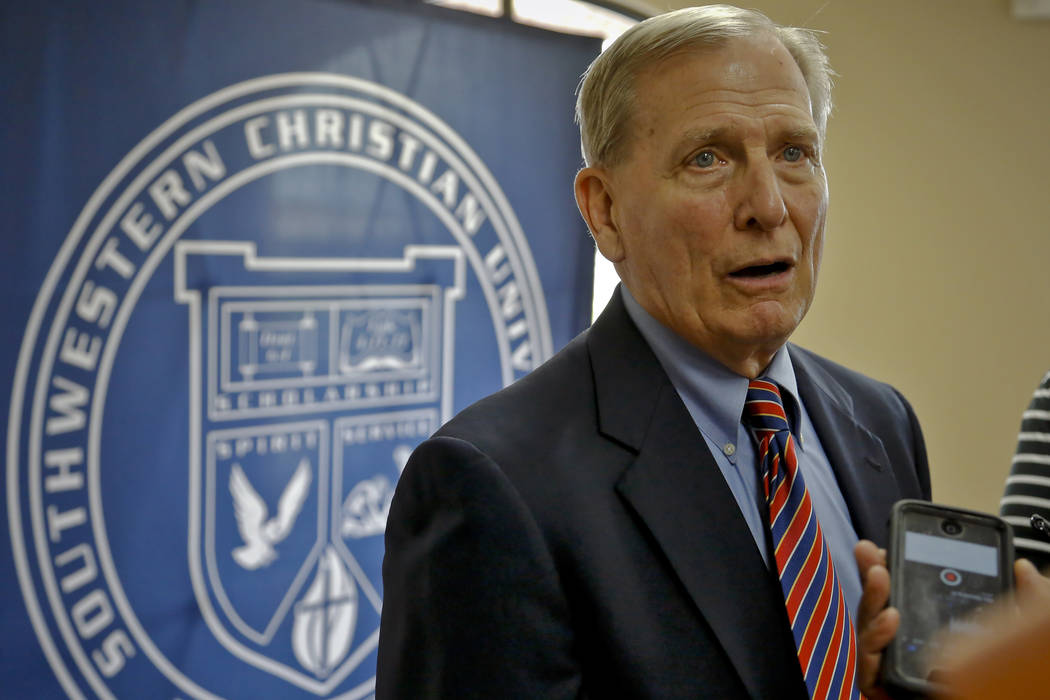 I’m really dating myself here, but there was a time when mentioning the name of Dave Bliss was done, well, blissfully, rather than with scorn and contempt.

During 1971-75, which coincided with my high school years, Bliss was an assistant under Bob Knight at Indiana. We’d be playing a team from Gary, or East Chicago, or maybe even one of the Hammond schools, and the other side would have a good player, and somebody would say that Dave Bliss was in the gymnasium to check him out.

I don’t remember actually seeing Bliss. But that became an euphemism during my high school years for being a good basketball player. If you were really good, Dave Bliss might be in the gym to check out your game.

That was long before the Baylor scandal.

And the Southern Methodist scandal.

And long before the vetting process at Las Vegas’ Calvary Chapel Christian School apparently broke down like an old Buick, and Dave Bliss landed a job as basketball coach and athletic director there.

According to the mission statement on the school’s website, “Calvary Chapel Christian School exists to build a strong foundation upon God’s word, reach the heart with God’s love, and impact the world for God’s glory.”

After finishing 7-17 last season, it also must want to win basketball games in the worst way.

Forgiveness is a tenet of the Christian faith, and I’m sure that word was used often by those at Calvary Christian in justifying the hiring of 73-year-old Dave Bliss.

Bliss must have been awfully convincing about finding Jesus, or Southwest Christian University of Oklahoma wouldn’t have hired him after all those scandals. Bliss guided the Eagles to the Christian College playoffs in both seasons he was on the job.

But then came the Showtime documentary “Disgraced.” Just when the viewer starts to believe Bliss really has turned a corner on the road to redemption, the coach is caught by the filmmakers during what he thought was an off-camera moment.

He reaffirms his assertion that Patrick Dennehy — one of his former players at New Mexico who was murdered in 2003 by troubled teammate Carlton Dotson after the former had rejoined Bliss in Waco, Texas — was a drug dealer. This is how Bliss tried to explain how Dennehy was able to afford college tuition that Bliss, out of scholarships to offer, had paid for in secret.

The cover-up was at the heart of the Baylor scandal.

Besmirching the character of a deceased player — a player who Bliss had recruited not once but twice, thus earning his trust and the trust of his family — was despicable. When Bliss tried to coerce the Baylor players and assistant coaches to become complicit in the cover-up, one of the assistants got it on tape.

“There’s nobody right now that can say we paid Pat Dennehy because he’s dead,” Bliss says on the recording.

There was moral outrage, much more than when Jon Koncak said he also had received money under the table during SMU’s glory years when Bliss was coach.

But even after two high-profile NCAA scandals, one of the standard variety and one that was morally reprehensible, the Allen Academy of Bryan, Texas, hired Bliss anyway.

It must have wanted to win basketball games in the worst way.

Less than a month into that job, Bliss was suspended from coaching for two years — apparently he had forged the name of the school headmaster on an approval form for a prospective player.

It would be a few years before the documentary filmmakers caught Bliss again. “What I did was, I got in the mud with the pigs. I paid a price, and the pigs liked it.” Then he laughs.

The day after “Disgraced” premiered on Showtime, Bliss resigned at Southwest Christian.

“My primary thoughts are that everybody in life should have an opportunity at redemption,” said Ray LeBeouf, executive principal at Mountain View Christian School, whose teams will be going up against those of Bliss. “But I think when you violate the trust of children, the place of redemption shouldn’t come in a place of guiding children.”

The assistant coach at Baylor who got Bliss on tape the first time was a bit more succinct. This is what Abar Rouse told The Undefeated website: “How in the hell do you let him be in charge of young men again? You’re telling me he was the best candidate you could find?”

Abar Rouse has been blackballed from getting an NCAA coaching job, because he secretly recorded his head coach trying to disparage the character of a murdered player. Dave Bliss is coaching again, or soon will be, in Las Vegas.

The peach basket has fallen off the barn wall.

— Bliss paying for tuition for two players (Patrick Dennehy and Corey Herring) and attempting to conceal it.

— Coaching staff providing meals, transportation, lodging and clothing to athletes, and paying to tuition and fees for a recruit at another school.

— Bliss encouraging boosters to donate to a foundation tied to a basketball team that included prospective Baylor recruits.

— Failure by the coaching staff to exercise institutional control over the basketball program.