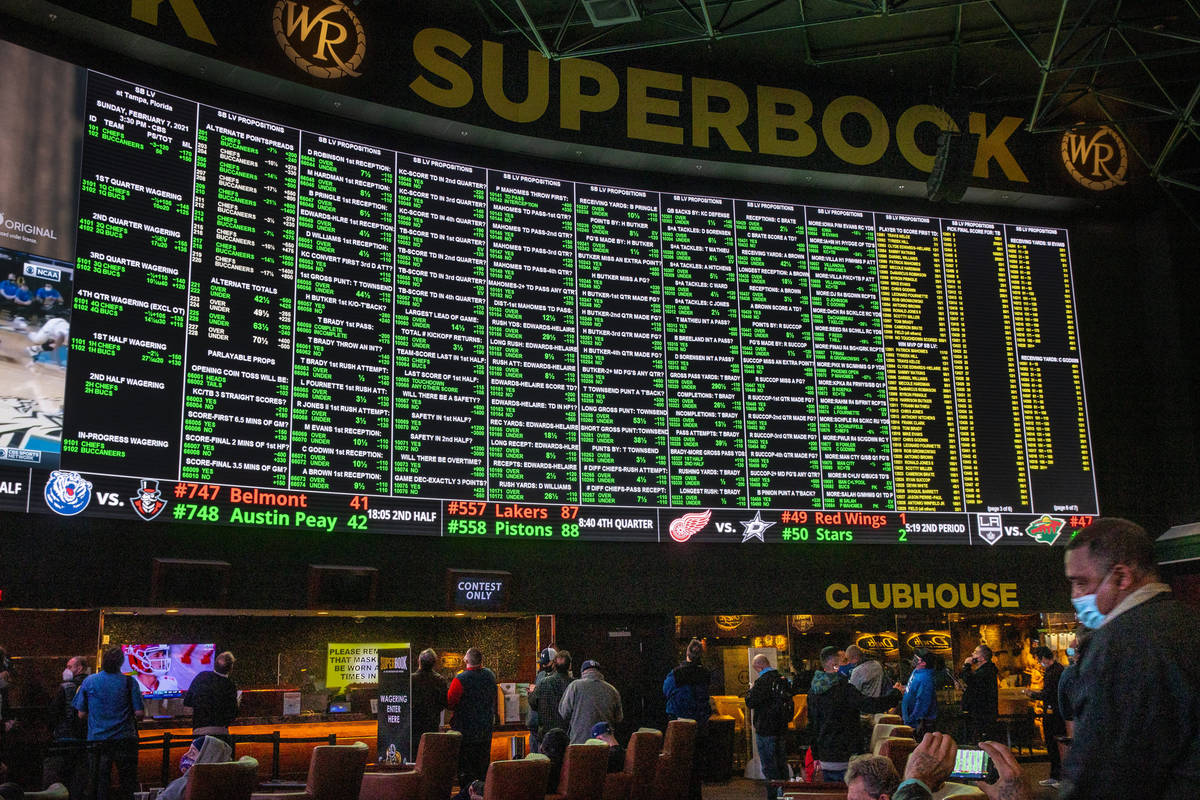 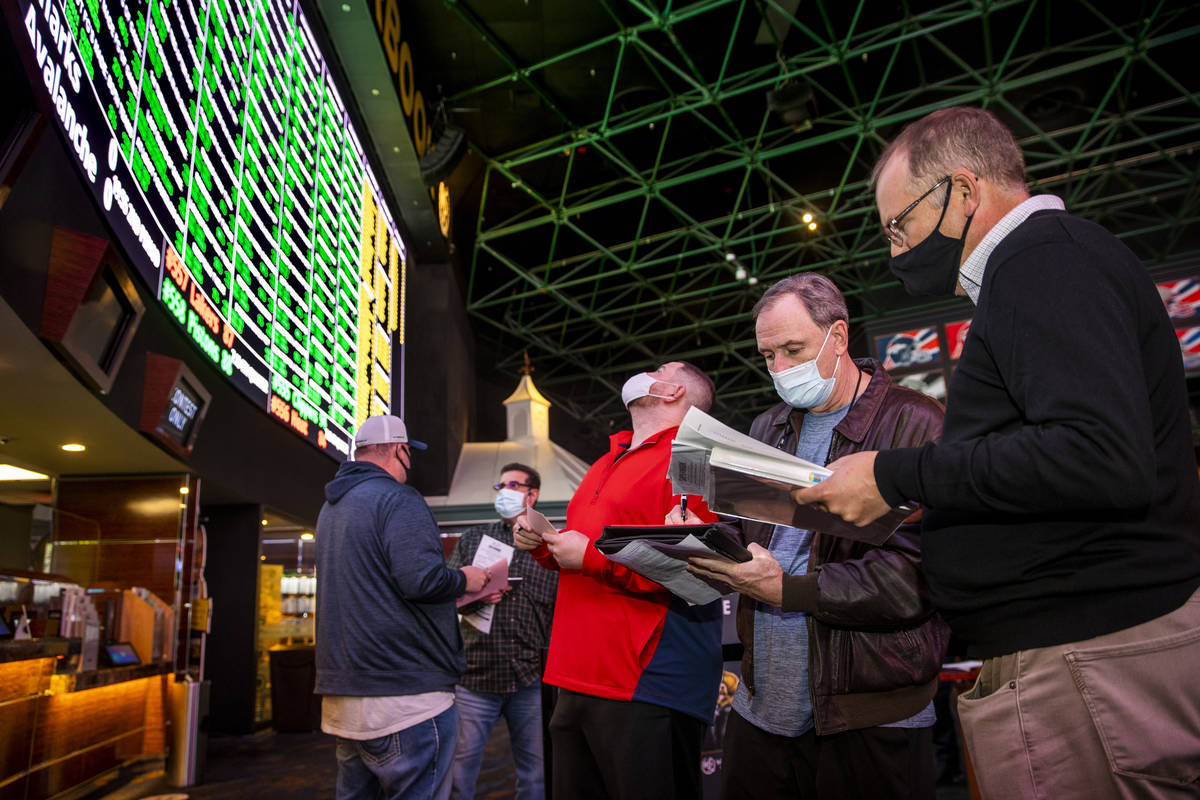 (From left) Bettors James, Jimmy and Logan Fields go over the numbers in line as the Westgate sportsbook posts hundreds of Super Bowl prop bets on Thursday, Jan. 28, 2021, in Las Vegas. (NOTE: Not all gamblers in line wanted to give their last names) (L.E. Baskow/Las Vegas Review-Journal) @Left_Eye_Images 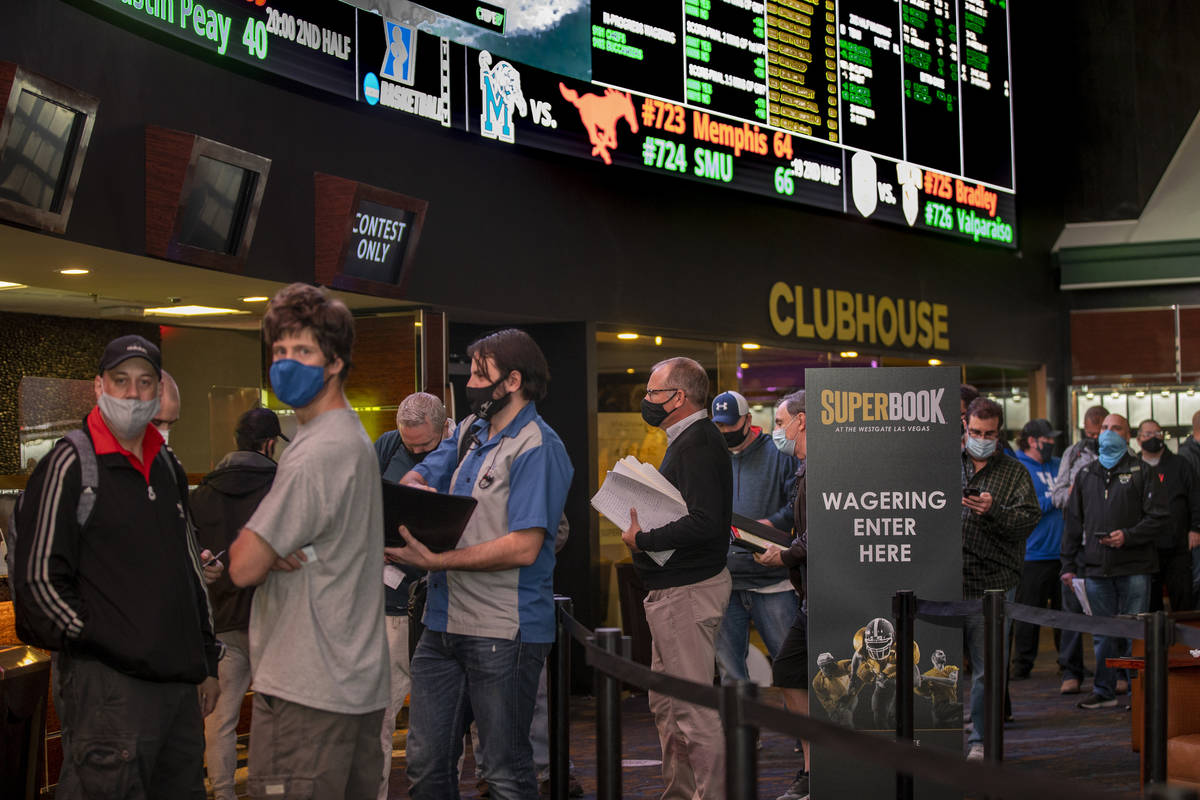 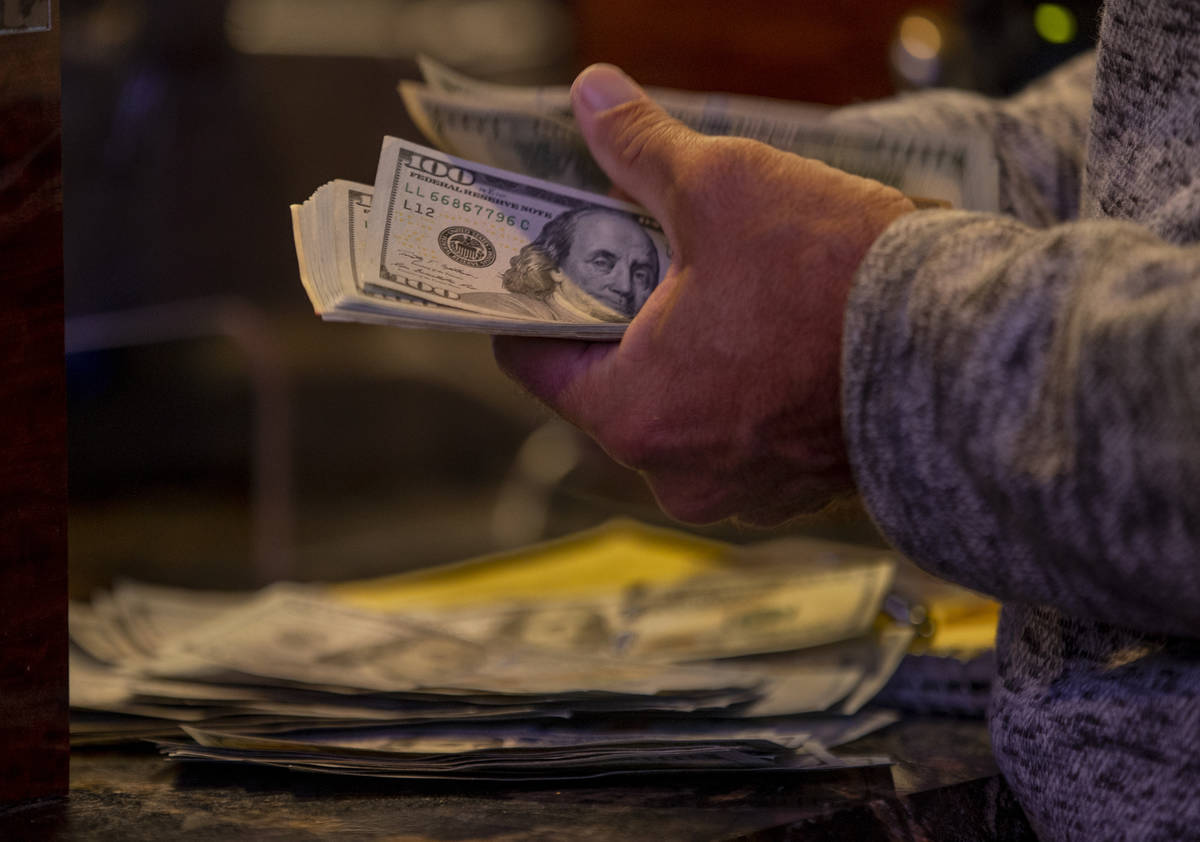 A bettor counts out the cash he will be placing as the Westgate sportsbook posts hundreds of Super Bowl prop bets on Thursday, Jan. 28, 2021, in Las Vegas. (L.E. Baskow/Las Vegas Review-Journal) @Left_Eye_Images 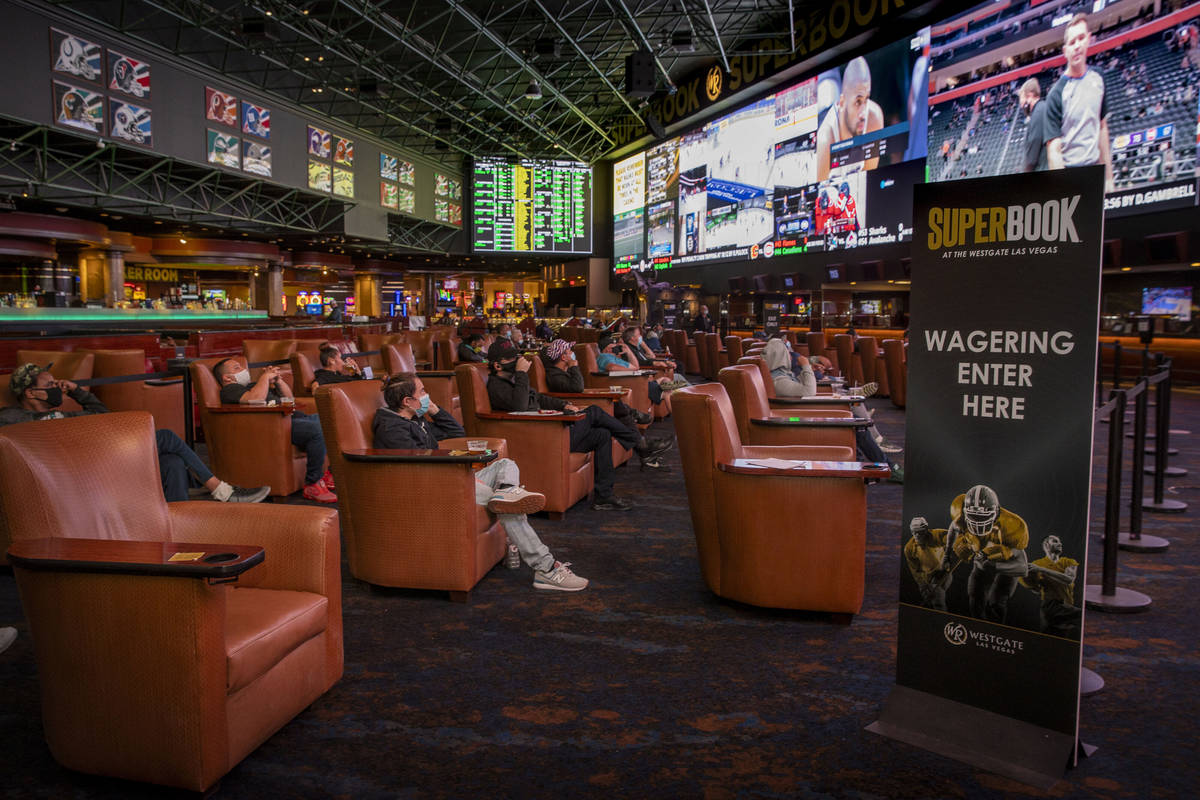 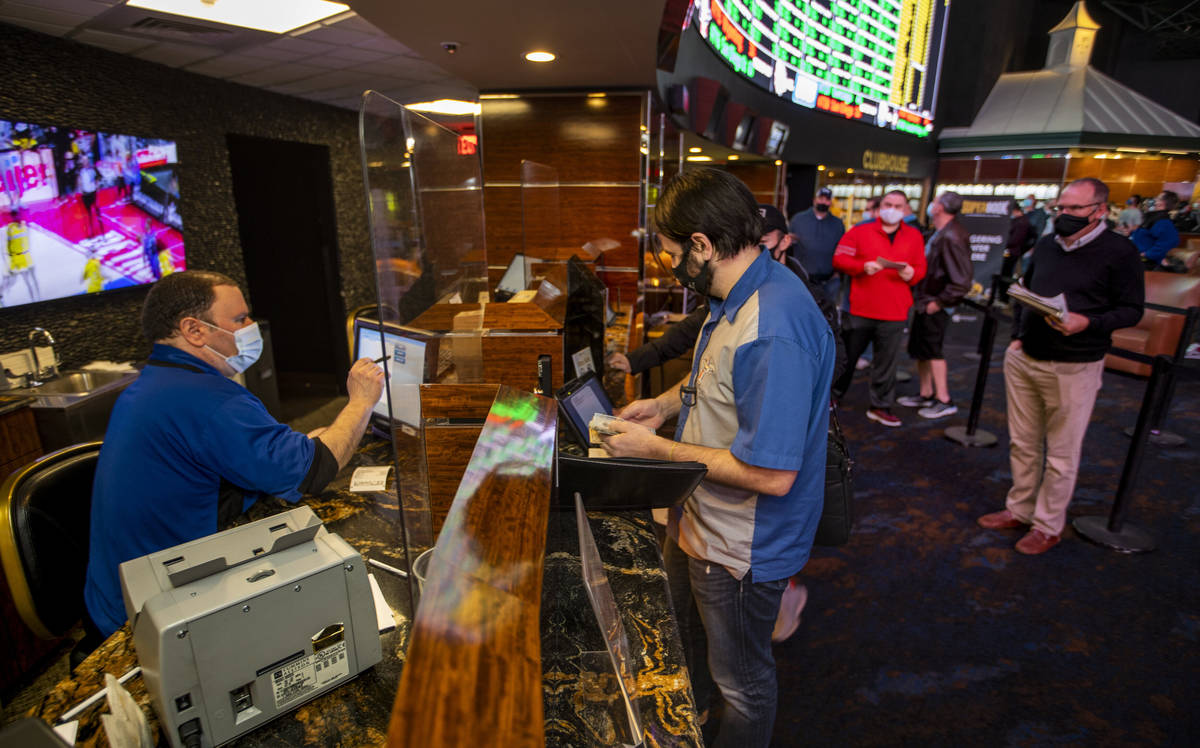 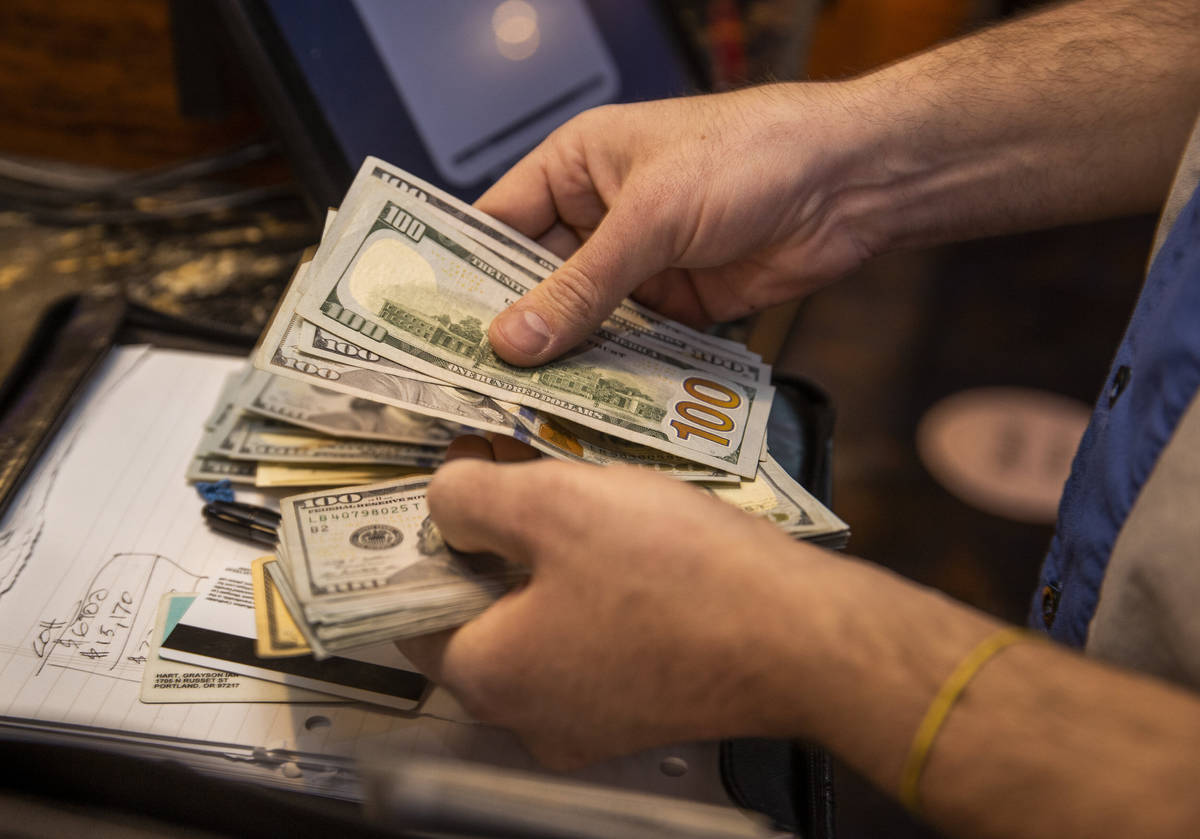 Bettor Grayson Hart counts out the cash he will be placing as the Westgate sportsbook posts hundreds of Super Bowl prop bets on Thursday, Jan. 28, 2021, in Las Vegas. (NOTE: Gambler declined to be identified) (L.E. Baskow/Las Vegas Review-Journal) @Left_Eye_Images 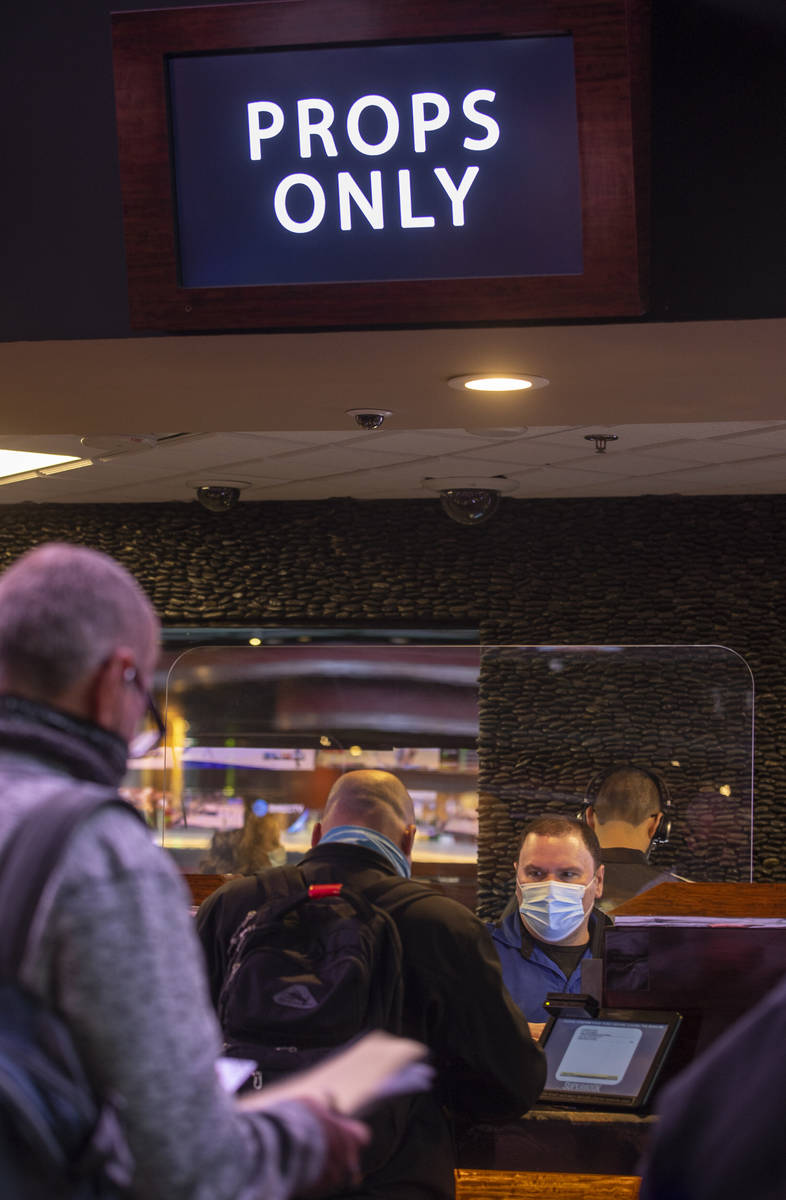 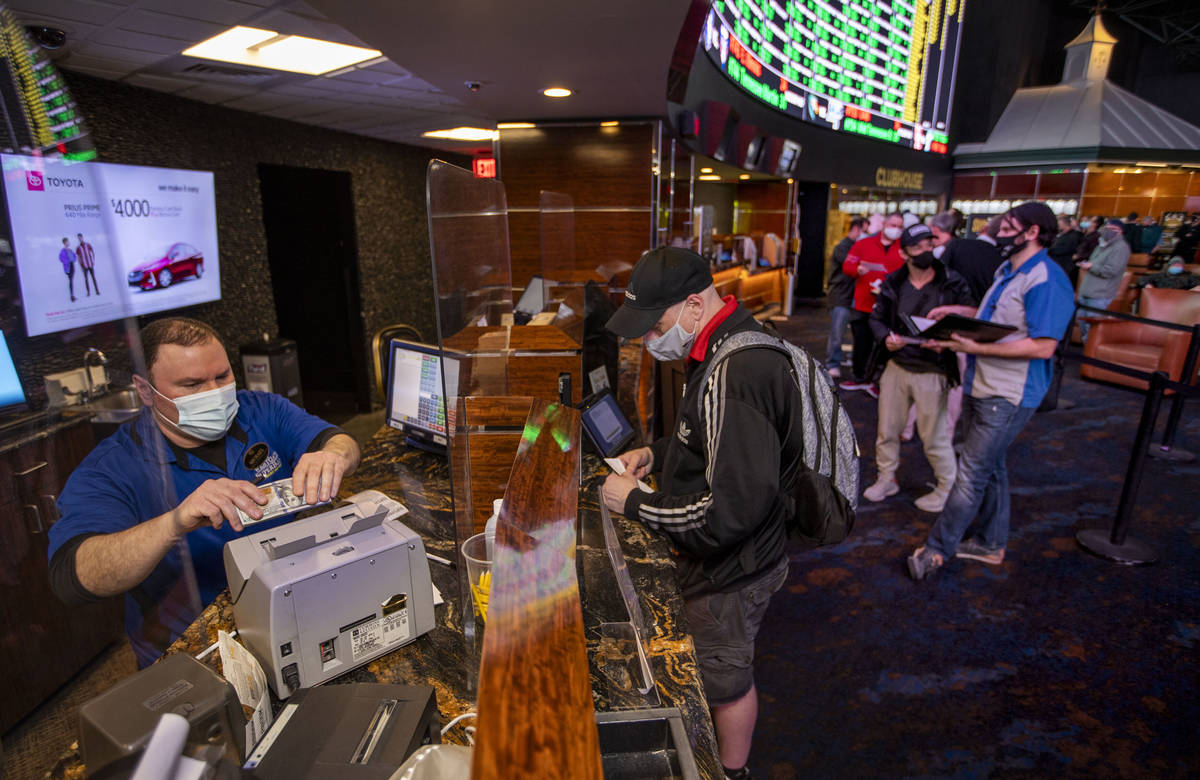 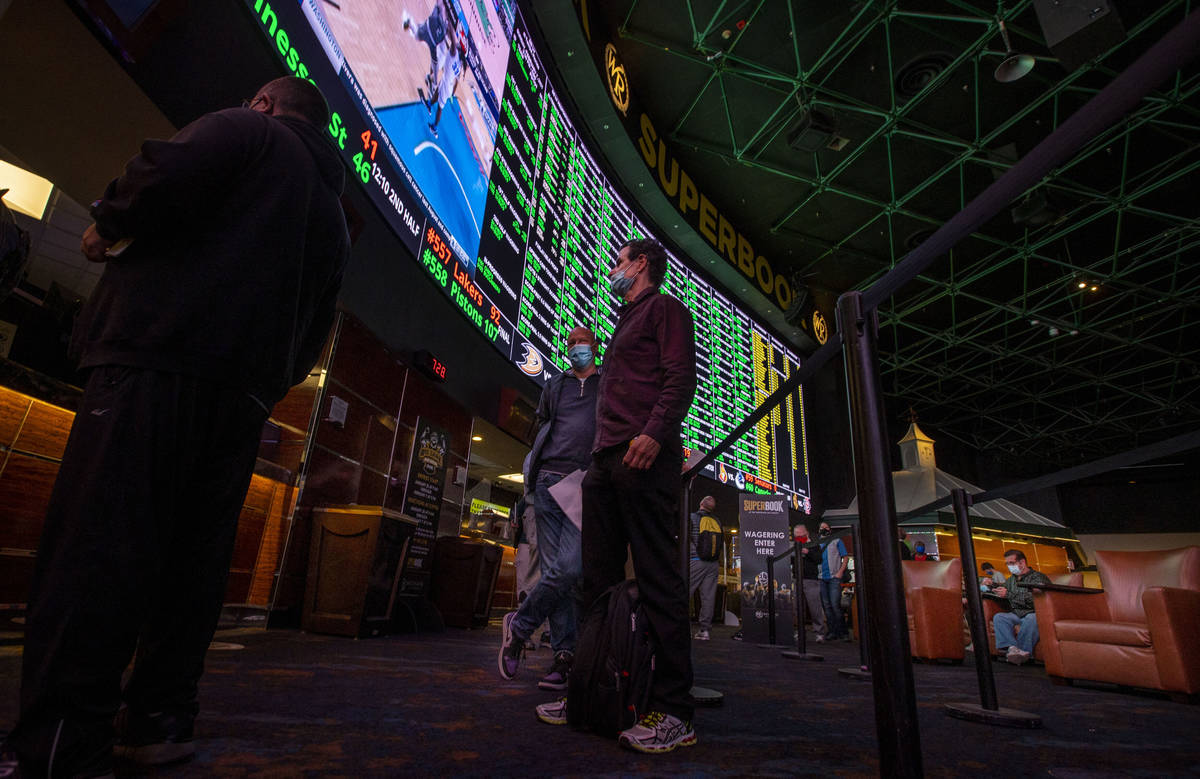 In keeping with an annual Las Vegas tradition, the Westgate and William Hill sportsbooks posted their massive menus of Super Bowl LV prop bets on Thursday.

William Hill released 1,218 ways to wager on the game at 2 p.m., and the video wall at the Westgate lit up at 7 p.m. sharp with more than 1,000 wagering options on the Feb. 7 showdown between the Kansas City Chiefs and Tampa Bay Buccaneers.

More than 90 percent of the people in line at the Westgate were wiseguys, or sharp bettors, who were allowed to place two wagers to win up to $2,000 each before going to the back of the line to repeat the process.

The turnout was smaller than in years past, most likely because of the coronavirus pandemic. A steady stream of about 20 bettors cycled through the line for an hour. By 9 p.m., the sharps were done.

Some professional sports bettors, such as Jeff Whitelaw, made their own props and wagered on the biggest differences between their numbers and the books.

“I try to make my own numbers and then try to get sort of an idea or game plan of what I think’s going to occur in the game and try to play in accordance,” he said. “If the Westgate is off enough, I’ll make a play.

“I’ll play some stuff (Thursday), and I’ll play a lot of stuff the Saturday and Sunday of the game. The public will push some things out of whack a lot.”

For example, Whitelaw expects the masses to overinflate the quarterbacks’ numbers, so he’ll wait until close to game time to bet under on props involving Patrick Mahomes and Tom Brady.

In general, sharps bet “under” and “no” on props, and the betting public bets “over” and “yes.”

“A lot of time, they’ll make a bet on something knowing the public will drive the price the other way, and they set themselves up for a big middle,” Murray said. “The only difference this year is we don’t know exactly how much public action we’re going to get.

“I definitely think tourism and foot traffic is going to be down from previous years because of the pandemic.”

Stuck in the middle

Many sharp bettors also will arbitrage, or wager on differences between books to guarantee a profit, aka a scalp.

Other bettors tried to middle numbers between books and win both bets.

Professional sports bettor Frank Carulli was at the Westgate trying to find middles on his mobile apps.

“You’re digging through a minefield to try to find a little nugget. But if you find one, it’s a home run,” he said. “It’s all who gets to it first. It’s a feeding frenzy for the people who try to find those.”

For all the complex cross-sport props, Murray said the player to score the first touchdown will be one of the most popular props.

Mahomes is 16-1 at the Westgate to score the first touchdown.