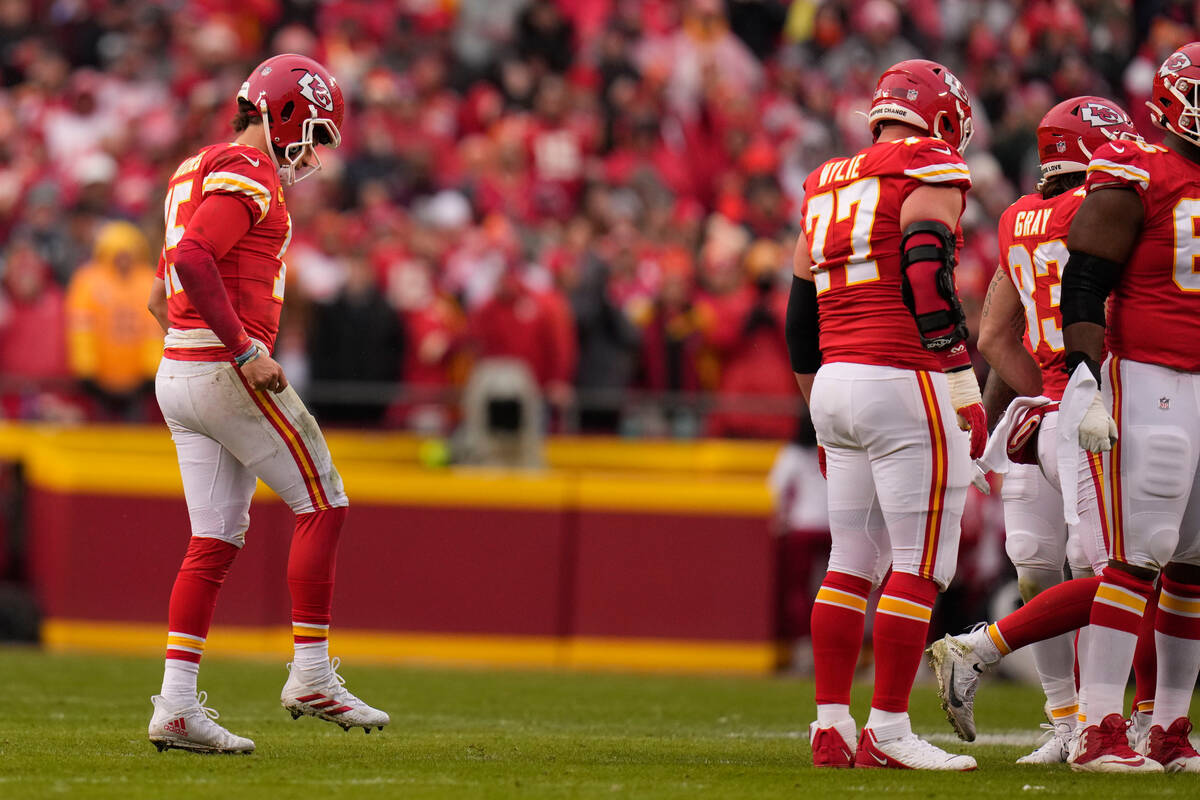 Kansas City Chiefs quarterback Patrick Mahomes (15) limps back to the huddle against the Jacksonville Jaguars during the first half of an NFL divisional round playoff football game, Saturday, Jan. 21, 2023, in Kansas City, Mo. (AP Photo/Jeff Roberson) 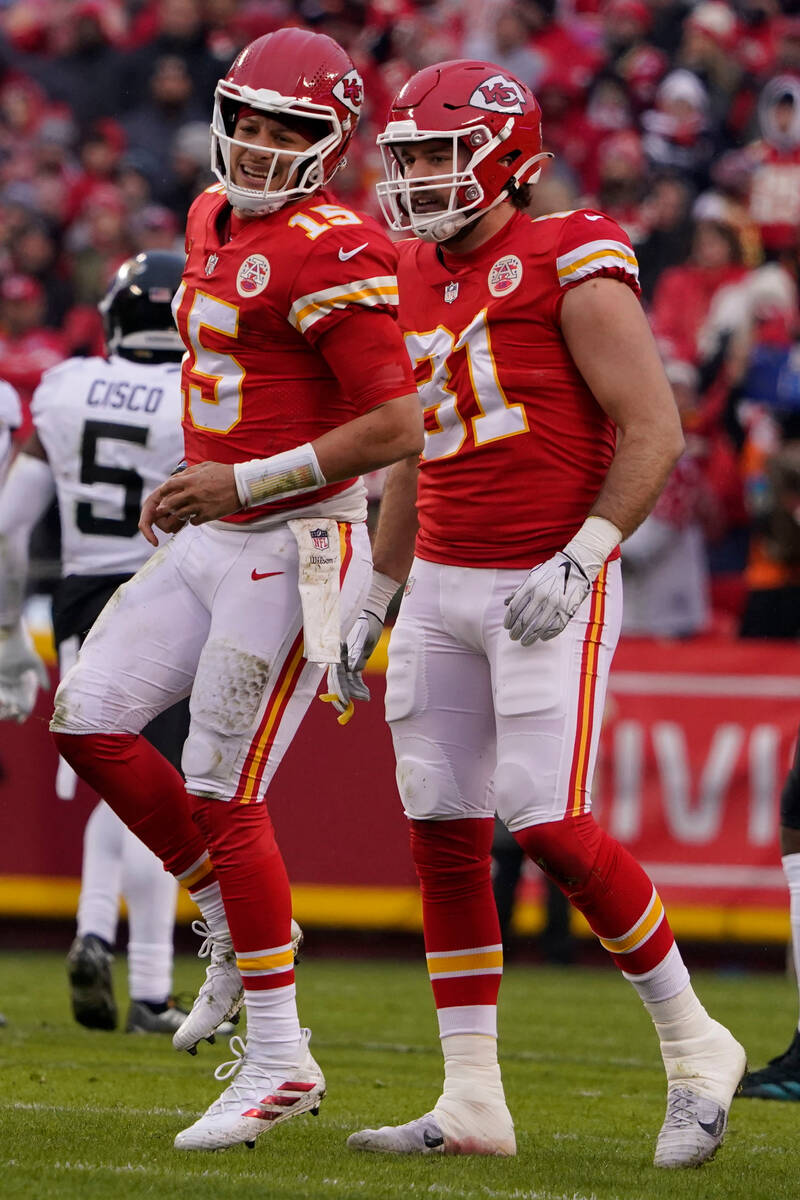 Kansas City Chiefs quarterback Patrick Mahomes (15) limps after an injury during the first half of an NFL divisional round playoff football game against the Jacksonville Jaguars, Saturday, Jan. 21, 2023, in Kansas City, Mo. (AP Photo/Ed Zurga)

Making a line on the AFC title game rematch was a bit trickier than usual for oddsmakers for two reasons.

One is that they don’t know the severity of the high ankle sprain suffered Saturday by former NFL MVP Patrick Mahomes in Kansas City’s 27-20 win over Jacksonville — which dealt Chiefs bettors a bitter loss with a backdoor cover by the Jaguars as a 9½-point underdogs.

The other is the dominant performance by Cincinnati in Sunday’s 27-10 victory over Buffalo as a 6-point underdog.

If Mahomes were 100 percent healthy, the Chiefs would probably be favored by 3½ or 4 points.

“Maybe a little lower just because of how dominant the Bengals were,” Caesars Sportsbook assistant director of trading Adam Pullen said.

But with Mahomes clearly at less than full strength, Kansas City opened at -2½ at Caesars and -3 at the Westgate SuperBook before the line quickly dropped to pick’em at several books.

“That wasn’t one of our best opening numbers. In the blink of an eye, the whole market was down to 1,” SuperBook vice president Jay Kornegay said. “Obviously, that injury is going to hinder him quite a bit. And (Bengals quarterback) Joe Burrow just looks incredible.”

While there was early action on Cincinnati, which has three straight wins over the Chiefs, there also was early support for Philadelphia, which opened as a 1-point favorite over San Francisco.

The Eagles (-7½) cruised to a cover in a 38-7 rout of the Giants on Saturday as quarterback Jalen Hurts accounted for three touchdowns in his return from a sprained right shoulder.

“The Eagles and Chiefs would be clear favorites if their quarterbacks were healthy,” Kornegay said. “But they’re not.”

Bettors lost on the weekend overall, in large part because all four divisional playoff games went under the total after overs went 5-1 on wild-card weekend.

“We were clearly Cowboys fans, but it would’ve been much worse had the game gone over,” Red Rock Resort sportsbook director Chuck Esposito said. “The Niners and over would’ve given away all of our profits for the weekend.”

Incredibly, Dallas kicker Brett Maher missed another extra point in the loss at San Francisco after he missed a record four in the Cowboys’ wild-card win over the Buccaneers.

Maher dealt a bad beat to bettors who had over 45½ points in Dallas’ 31-14 victory over Tampa Bay. But gamblers won on an extra point prop Sunday when Maher had his only attempt blocked in the second quarter.

The Westgate and Circa posted yes/no props on whether Maher would miss an extra point. Both books opened yes at 5-1, and it closed at +350 at the SuperBook as most bettors wagered on Maher to miss.

“We based it off history, and he’s made 94 percent of his extra points. It was highly unlikely that he would miss one,” Kornegay said. “But even if it wasn’t blocked, it was definitely going wide left. It looked like a shank to me.

“We definitely lost on it, but it’s not like we got crushed.”

Caesars has a seven-figure liability on the 49ers to win the Super Bowl.

“The Niners are, by far, our biggest liability,” Pullen said. “And it’s all from Nevada, especially up north. We have no liability in the rest of the states.”

San Francisco also is a large liability at Station Casinos.

“But Cincinnati has been kind of the ‘vogue’ team the last six to eight weeks,” Esposito said. “Sharps continue to bet them on the futures book.”

With the conference title games virtual toss-ups, the odds to win the Super Bowl also are almost even. At the Westgate, the Bengals are the +265 favorites to win it all, the Chiefs and Eagles are each +275, and the Niners are 3-1.

“I don’t remember two conference championships both being close to pick’em,” Kornegay said. “I can’t remember ever seeing that.”