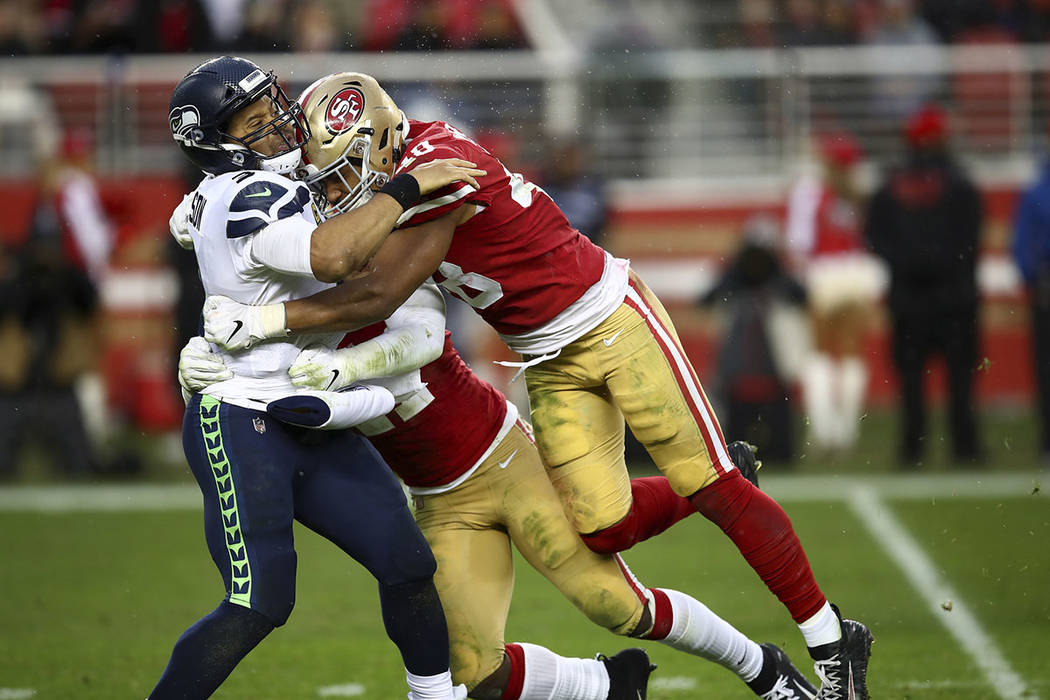 There was only one outright upset in nine NFL games Sunday morning. But the rest of the day went to the dogs for bettors, as underdogs went 3-0 with three outright upsets.

The 49ers beat the Seahawks 26-23 in overtime as 4-point home underdogs, and the Steelers defeated the Patriots 17-10 as 2½-point home ’dogs Sunday afternoon as Las Vegas sports books rejoiced.

“The afternoon made our day,” The Mirage sports book director Jeff Stoneback said. “Those two games were as good as a good morning where you have eight games going.”

An MGM Resorts bettor lost a $500,000 money-line wager on Seattle, which had its 10-game winning streak over San Francisco snapped when Robbie Gould kicked a 36-yard field goal in overtime.

Russell Wilson rallied the Seahawks from deficits of 20-13 and 23-20 in the fourth quarter, but they failed to score on their last three possessions.

Stoneback said the big bettor was a casino player who had won mid-six-figure wagers on the Chargers over the Chiefs on both the spread and money line Monday night.

New England, backed by sharps and the betting public at the MGM, came away with only three points in three fourth-quarter drives inside the Pittsburgh 15. Tom Brady threw a bad interception on a ball he tried to throw out of bounds on one drive and then turned it over on downs with 14 seconds left after three straight incompletions.

The Patriots finished with a losing road record (3-5) for the first time since 2009.

The Eagles beat the Rams 30-23 in a stunning upset Sunday night after closing as 13½-point underdogs and 6-1 on the money line. The line opened as low as 7½ before soaring after quarterback Carson Wentz was ruled out. But it wasn’t a big decision for the books.

“There’s no decision because of the high number,” Wynn Las Vegas sports book director Doug Castaneda said before the game. “That line shot up, but it’s not really true action. It was more the books bracing themselves for worst-case scenarios.”

The betting public won on the Vikings, who whipped the Dolphins 41-17 as 7½-point favorites.

“We got beat every which way on the Vikings game,” Castaneda said. “From the first half to the game to the over. We had parlays snowball there with the home team.”

The public also won big on the Titans, who opened as 3-point underdogs and closed as 2½-point favorites over the Giants before cruising to a 17-0 win.

The first three places in the Westgate SuperContest each took Tennessee, which was the consensus No. 2 pick in the contest.

An MGM bettor in New Jersey hit an $8,000 six-team parlay for $330,000 on Sunday morning. The gambler had six first-half plays on the Vikings, Titans, Colts, Jaguars, Cardinals-Falcons over and Buccaneers-Ravens under.

Dede Westbrook scored a TD on a 74-yard punt return with four seconds left in the first half to put Jacksonville ahead 10-3.

The Redskins, the least-selected team in the SuperContest, beat the Jaguars 16-13 as 7½-point underdogs behind quarterback Josh Johnson. Jacksonville quarterback Cody Kessler threw for a whopping 57 yards.

The SuperContest consensus top five went 2-3 for the sixth consecutive week to fall to 38-37 this season.

The Colts were the No. 1 consensus play, selected by 999 entries, and beat the Cowboys 23-0 as 3-point favorites.

The losers were the Seahawks, Patriots and Packers, who failed in two red-zone cracks at the backdoor cover in a 24-17 loss at Chicago as 5½-point ’dogs.

The SuperContest Gold top five turned into the top six with the 49ers and Patriots tied for the fifth-most selections. It went 4-2 (with winners on Colts, Vikings, Titans and Niners and losers on Broncos and Patriots) to run its season record to 41-30-5.

Rush YYZ 2112 went 4-1 on Sunday, with winners on the Vikings, Titans, Falcons and 49ers and a loser on the Raiders.

@Pigskin_Junkies went 3-2, with winners on the Texans, Vikings and Titans, and losers on the Packers and Cardinals.