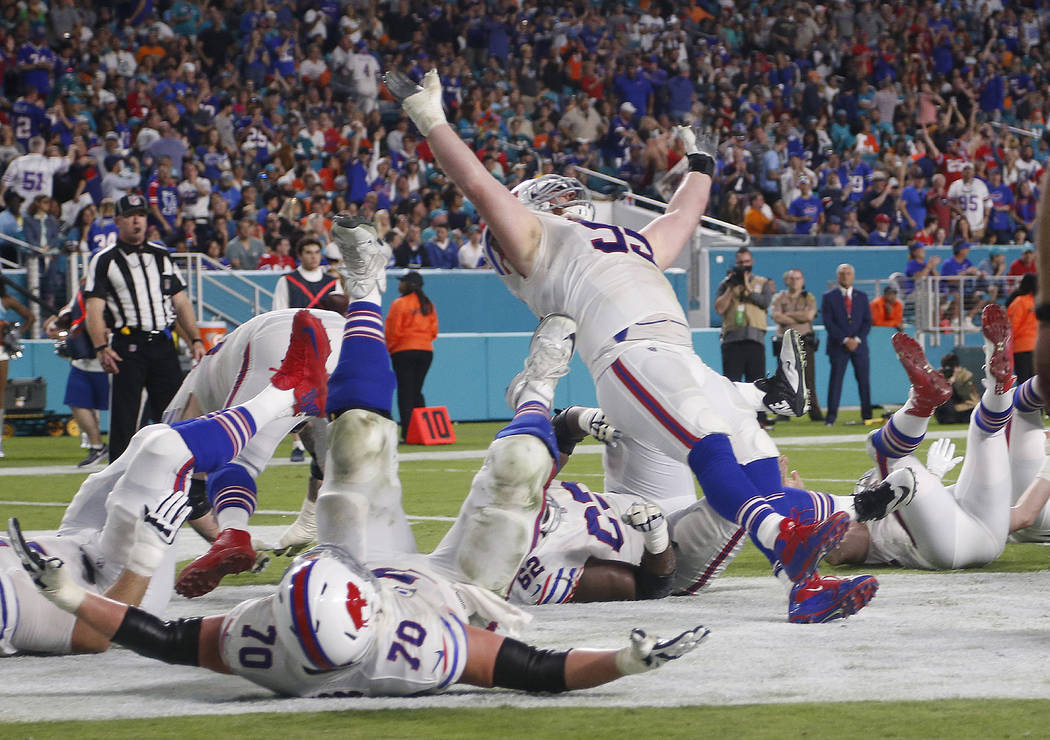 Buffalo Bills defensive tackle Kyle Williams (95) and a group of players fall to the ground in celebration after Williams scored a touchdown, during the second half of an NFL football game against the Miami Dolphins, Sunday, Dec. 31, 2017, in Miami Gardens, Fla. (AP Photo/Wilfredo Lee) 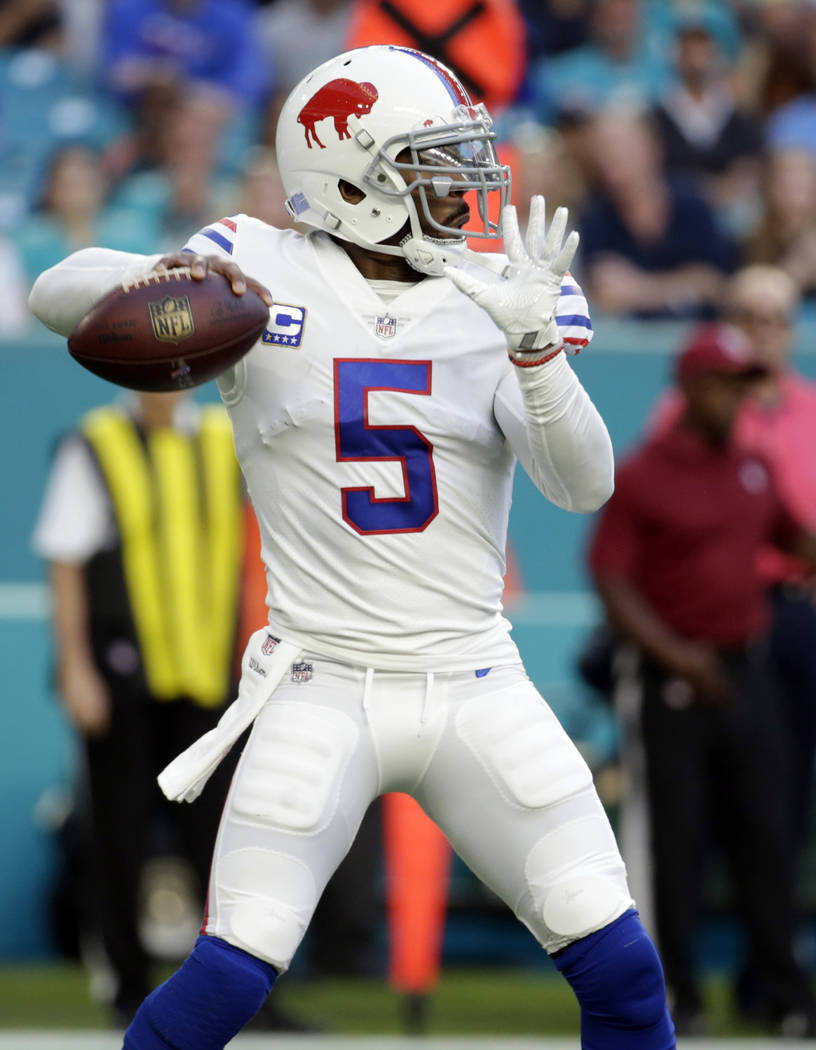 Buffalo Bills quarterback Tyrod Taylor (5) looks to pass, during the first half of an NFL football game against the Miami Dolphins, Sunday, Dec. 31, 2017, in Miami Gardens, Fla. (AP Photo/Lynne Sladky) 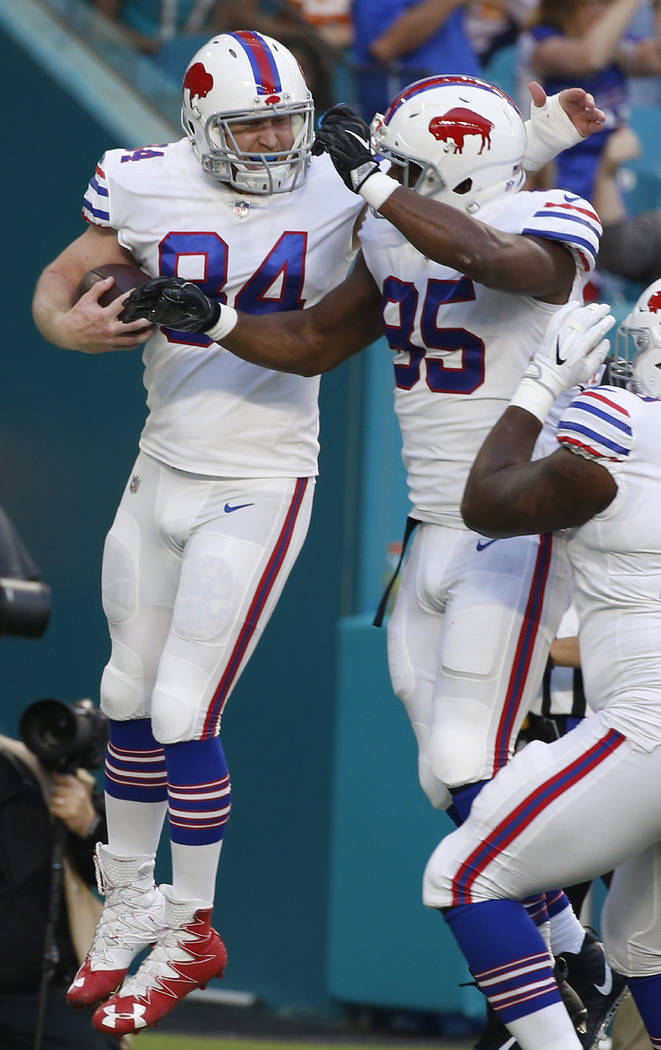 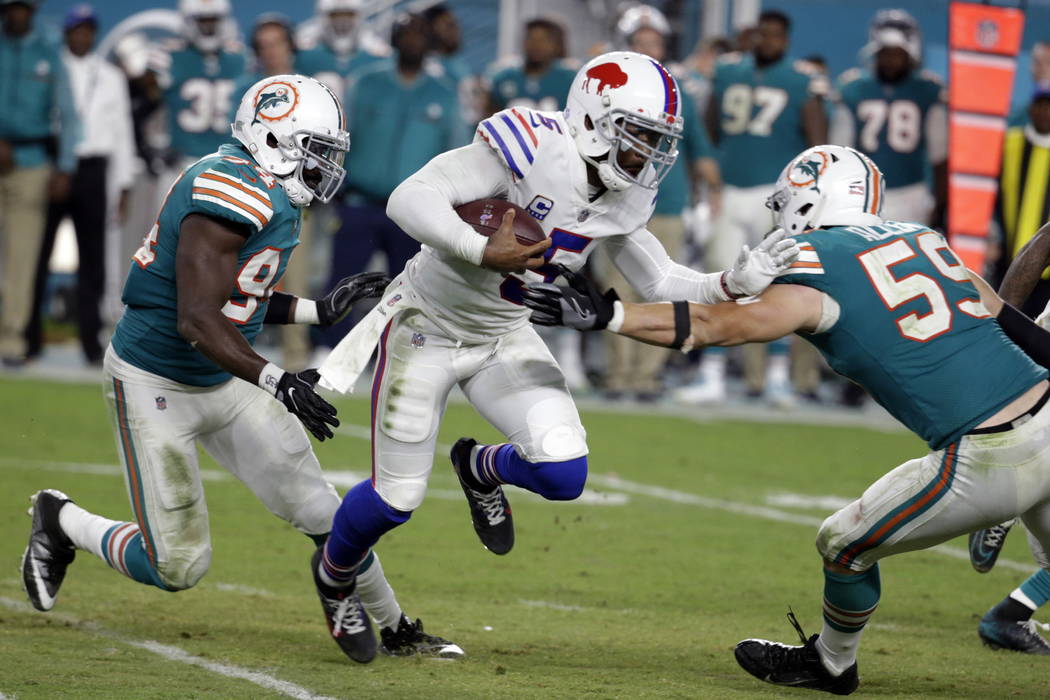 The last time the Bills were in the playoffs, they lost to the Titans on the “Music City Miracle,” a desperation lateral that actually worked and helped propel Tennessee to Super Bowl XXXIV in 2000.

The Titans also secured a playoff spot with a 15-10 win over the Jaguars, who opened as 7-point favorites over Buffalo at Station Casinos in their Jan. 7 wild-card game.

“That doesn’t sound like a game people will be clamoring to watch,” Caesars Palace sports book director Frank Kunovic said in the final understatement of 2017.

The Bills might be without leading rusher LeSean McCoy, who left Sunday’s 22-16 win over Miami with an ankle injury.

The Chiefs opened as 7½-point favorites over Tennessee in Saturday’s other wildly entertaining AFC wild-card game.

“I haven’t been impressed with Tennessee down the stretch,” Esposito said. “Kansas City has played a little better down the stretch and they are at home. There might not be a lot of points in that game.”

“The Rams-Atlanta game is probably the best game out of the bunch,” Wynn Las Vegas sports book director Johnny Avello said. “They don’t look that appealing to me but they are playoff games.”

Los Angeles rested its starters in Sunday’s 34-13 loss to the 49ers, who opened as 6½-point underdogs and closed as 6½-point favorites in one of the best games of the day for bettors.

The Falcons beat the Panthers 22-10 for the chance to defend their NFC title.

“This Rams team has been on such a roll. You have to throw out (Sunday’s) game,” Esposito said. “I think you’re going to see this Rams number go up.”

The Saints lost 31-24 at Tampa Bay in one of five outright upsets Sunday, though favorites finished 9-6-1 ATS.

New Orleans swept the season series from NFC South foe Carolina, winning 34-13 on the road Sept. 24 and 31-21 at home Dec. 3. But Avello and Esposito each consider the Panthers a live underdog.

“It’s tough to beat a team in your own division three times,” Esposito said. “They’re going to probably back New Orleans but there is value with Carolina if it creeps up any higher.”

In the preseason, Esposito touted the Vikings as a serious candidate to reach Super Bowl LII in Minnesota. Now the Vikings are the 4-1 second choice to win the NFL title behind the Patriots, who are 2-1 favorites. The Steelers are 9-2 and the Saints are 5-1.

“The Super Bowl is going to go through Pittsburgh and New England in the AFC, but the waters are a little more muddied in the NFC,” Esposito said. “You can make a case for five of six teams and the one I left out played in the Super Bowl last year.

Stag Capital won the $470,000 winner-take-all SuperContest Gold by a half-point over Midwest Square. Stag Capital (51-32-2) clinched the title on his final play on Tampa Bay, a 7-point underdog.