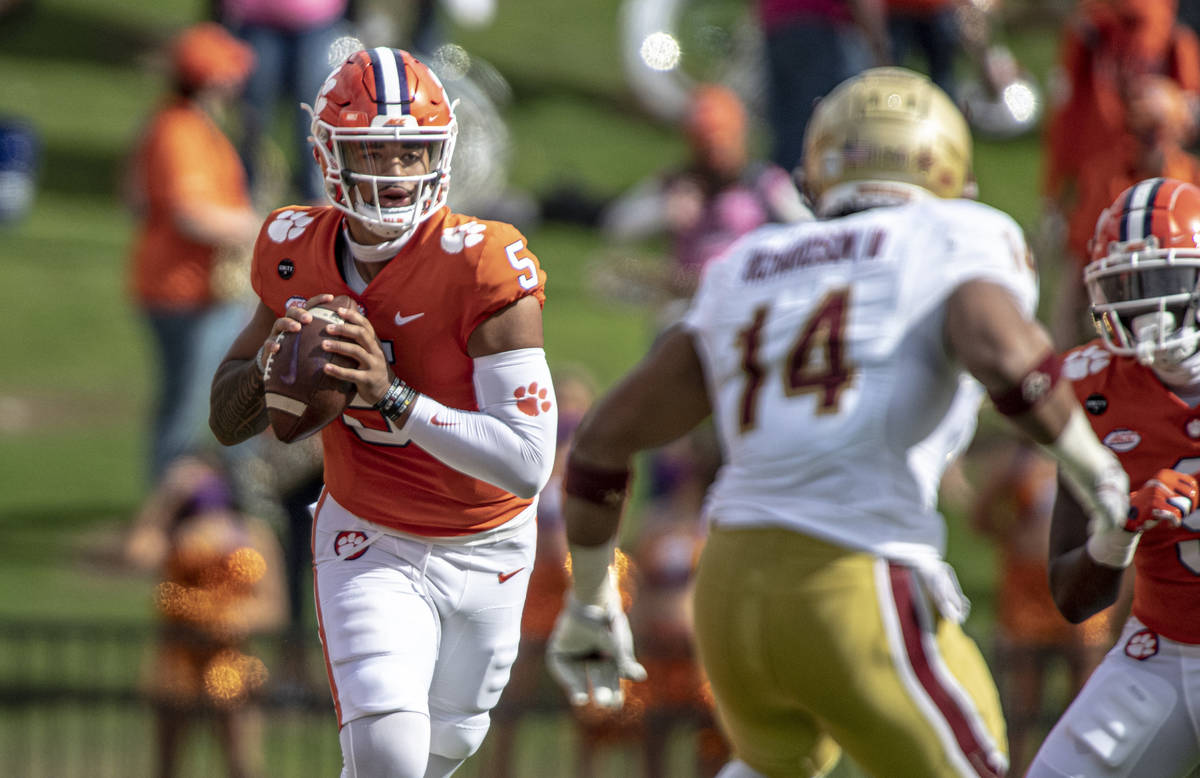 Clemson quarterback D.J. Uiagalelei (5) passes the ball during the first half an NCAA college football game against Boston College on Saturday, Oct. 31, 2020, in Clemson, S.C. (Josh Morgan/Pool Photo via AP) 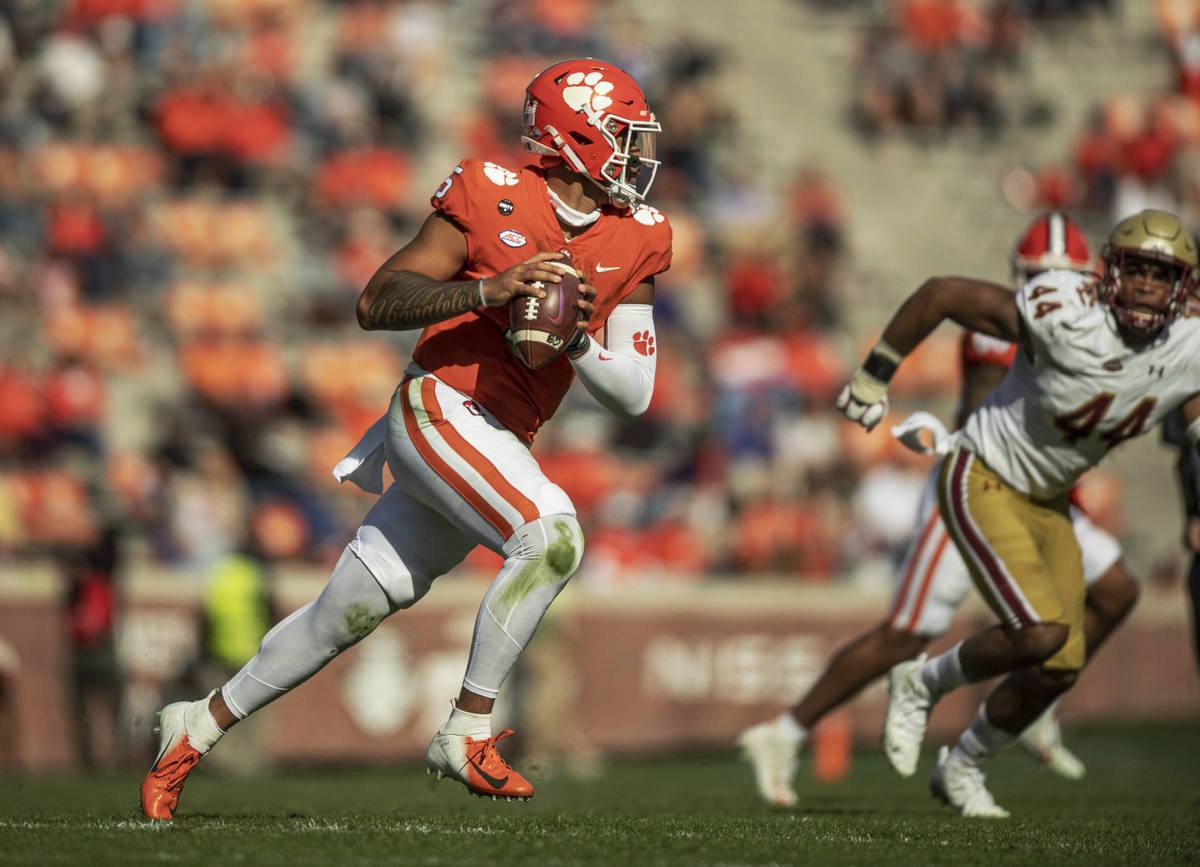 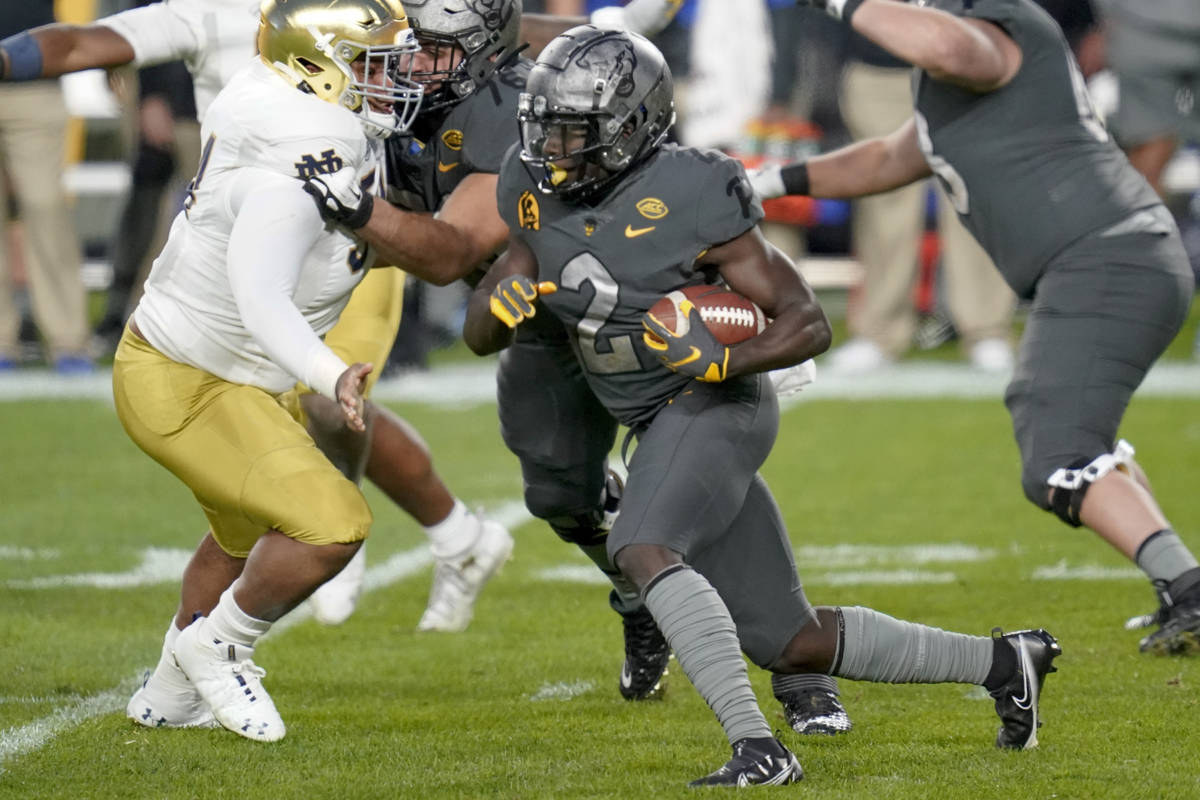 Pittsburgh running back Israel Abanikanda (2) plays against Notre Dame during the second half of an NCAA college football game against Pittsburgh, Saturday, Oct. 24, 2020, in Pittsburgh. (AP Photo/Keith Srakocic) 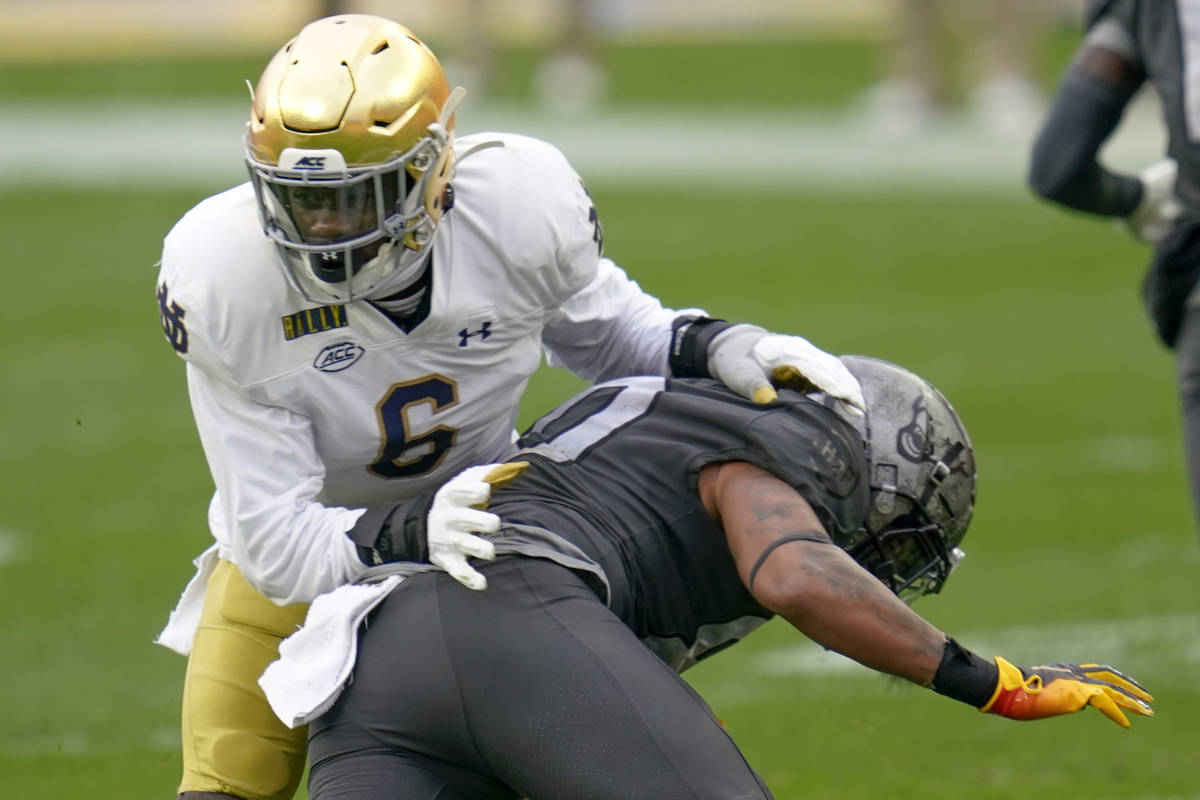 Two years ago, Notre Dame was outclassed by Clemson in the College Football Playoff semifinals.

Lawrence will miss his second straight game in Saturday’s rematch in South Bend, Indiana, after a positive coronavirus test. But No. 1 Clemson (7-0) is still in a different class than No. 4 Notre Dame (6-0).

“Notre Dame is nowhere near the class of Clemson, Alabama and Ohio State,” Circa Sports sportsbook director Matthew Metcalf said. “I consider Georgia an elite team, too. Florida and Wisconsin are two teams that have recently shown they’re trying to make it up to the elite level.

“Notre Dame is a class below Wisconsin and Florida. Despite Lawrence being out, Clemson is still a tier above Notre Dame. It will be a pretty good upset if Notre Dame wins. But they’re definitely live. They’ve got a shot.”

Sharps on both sides

Circa, which posts the college football opening lines at 11 a.m. each Sunday, opened Clemson as a 4-point favorite. The book took sharp bets on the Tigers at -4, -5 and -6 on Sunday before taking sharp buyback action Monday on the Irish at +7. It then moved the line back to 5½.

“We were testing the market. Once we saw sharp money didn’t want to be that high, we’ve been (at 5½) since Monday,” Metcalf said. “All the bets we took Sunday and Monday were from players who have influence on the market. I respected the +7 bets more than I respected the bets on the way up.

“When we open those numbers, when the limits are lower, we’re kind of looking for the ceiling and floor of the number.”

William Hill sportsbook director Nick Bogdanovich expects the game to have the biggest betting handle of the regular season.

“Notre Dame, Alabama, Clemson, those teams will draw monster action whenever they play. Georgia is down the pecking order a little,” he said. “You throw in that it’s a late game, where people are going to bet with both hands, and I think it has a good shot of being the biggest bet game until the playoff.”

Metcalf also anticipates a ton of betting interest, raising Circa’s limit on the game to $25,000 on Thursday.

“I haven’t done that on a game yet. Just the fact I did that, it feels like a really big game,” he said. “People feel like either team can win.”

Metcalf said Lawrence is worth about a touchdown to the spread.

“That’s pretty standard if a star quarterback goes down in college,” he said. “It’s hard to back a backup quarterback. Maybe in the pros, but I wouldn’t make it a habit in college.”

That said, if Lawrence was playing, Metcalf said he wouldn’t simply add seven points to the spread and make Clemson a 12½-point favorite.

“That sounds high. They’re not going to lay the same amount of points against Notre Dame, the way they play defense and run the ball,” he said. “It’s not like going against North Carolina. I would’ve had it 9½ to 11.”

“I want to say it will be a tough environment for a freshman quarterback going on the road. But there’s no fans. But there’s still something to playing on the road as a freshman,” Metcalf said. “I haven’t adjusted much for the lack of fans, really. I still do my standard home-road deduction. I kind of let the market figure it out because I don’t know what to do with it.”

Notre Dame has the nation’s No. 2 scoring defense (10.3 ppg), and handicapper Paul Stone thinks a lower-scoring game is likely. Stone (@PaulStoneSports), 25-14-1 ATS in the Review-Journal College Football Challenge, recommends taking the total to go under 50½.

Stone’s best bet is the Aztecs, who have won seven straight in the series against the Spartans and averaged 318 yards rushing in the last six meetings.

“The Spartans take a significant step up in class this week,” he said.

“Strangely enough, the Spartans have the best passing game in the Big 10,” said Lane (@DanaLaneSports). “Even if the turnover bug rears its head again for Lombardi, that may be a plus, perhaps giving the Hawkeyes a few short fields.”