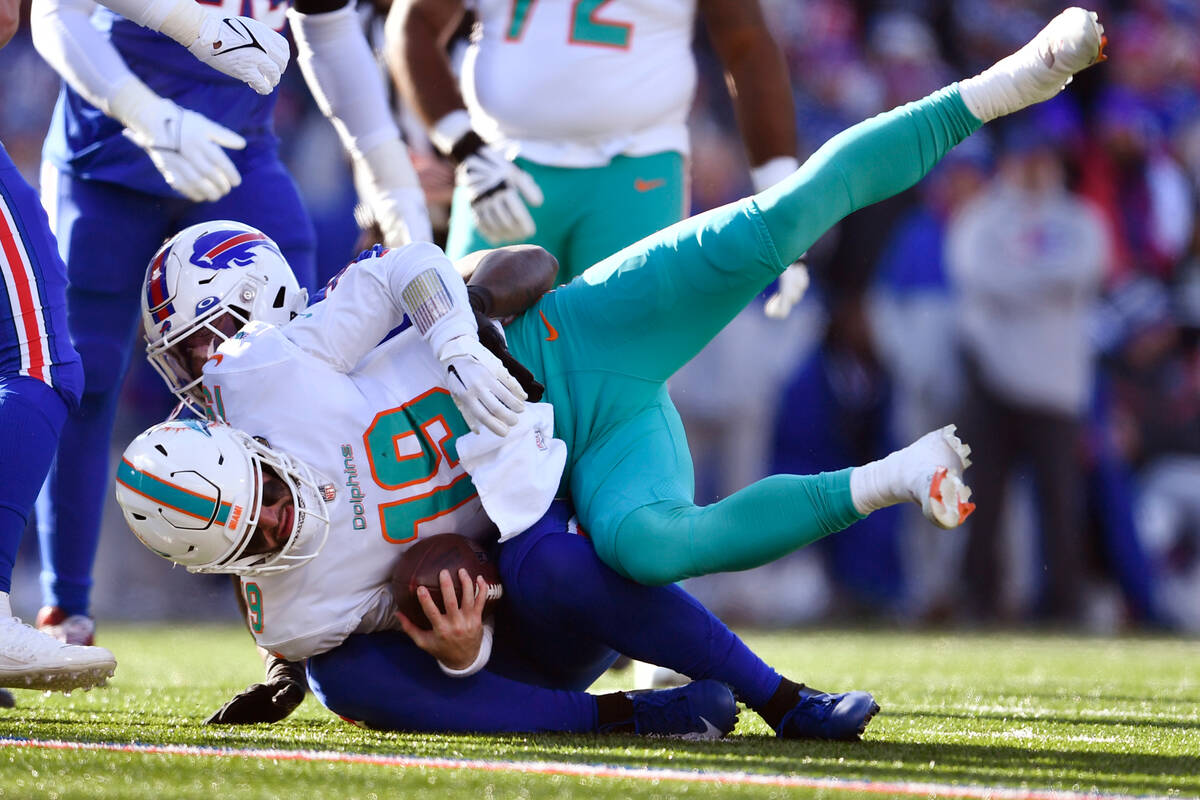 A day after the Jaguars pulled off the third-biggest comeback in NFL playoff history, the Dolphins delivered a surprising rally of their own Sunday to deal a big loss to Bills bettors.

Miami, a 13½-point underdog at Buffalo behind third-string rookie quarterback Skylar Thompson, fell behind 17-0 early in the second quarter, and the wild-card game appeared destined to be a blowout.

But the Dolphins stormed back to tie it at 17 late in the first half after turning a Josh Allen interception into a touchdown, and they took a 24-20 lead early in the second half after returning Allen’s fumble for a score.

Buffalo went ahead 34-24 late in the third quarter, but Miami answered with a long TD drive to make it 34-31. And that’s how it ended, much to the dismay of bettors.

“That was, by far, the biggest game of the weekend,” Red Rock Resort sportsbook director Chuck Esposito said. “There was a lot of liability going into (Sunday). Everybody had the 49ers, Bills and Bengals in parlays and teasers. Getting the Bills to win by three really killed all that.

“We were fishing for a win, and we got it with the Dolphins.”

The Chargers (-2½) appeared to be cruising to a blowout win at Jacksonville on Saturday when they took a 27-0 lead in the first half following four interceptions by Trevor Lawrence.

A bettor at DraftKings, which doesn’t operate in Nevada, certainly believed Los Angeles was a lock to win at that point. The gambler wagered $1.4 million to win $11,200 on the Chargers on the live money line (-12,500).

The bettor lost their wager, as the Jaguars outscored Los Angeles 31-3 the rest of the way behind four TD passes by Lawrence and dealt the Chargers a shocking 31-30 defeat.

“If the Chargers would’ve won by 10 or more (to cover Jaguars teasers), it might have been the biggest day of the football season for us,” SuperBook vice president Jay Kornegay said. “If they just would’ve won the game, it would’ve been one of the best days of the year.

“That ended up being our biggest loser on the weekend.”

Bettors at Caesars cashed in on the Jaguars on the live money line, which reached 28-1 at one point.

“We took some bets at 28-1 on the Jaguars in-play. It was definitely a good result for bettors,” Caesars assistant director of trading Adam Pullen said. “Once one team gets the momentum, it doesn’t matter what price you put up, they’re taking it.

“The avalanche of money that comes in at those prices adds up.”

Bettors also won wagering on overs, which are 5-0 in the playoffs.

“We have not done good on the totals,” Esposito said.

“The overs don’t help. The public should be cashing in on those,” Pullen said. “We could use an under. And we always root for one big ‘dog to win outright, which kills money-line parlays. But we haven’t seen that yet.”

Baltimore appeared on the verge of taking a seven-point lead over Cincinnati with 11:39 left when it had third-and-goal at the 1-yard line Sunday night.

But Ravens quarterback Tyler Huntley had the ball punched out when he tried to go over the top, and defensive end Sam Hubbard returned the fumble 98 yards for a TD to put the Bengals ahead 24-17.

Most Baltimore bettors cashed their tickets at +8½ or better after Huntley’s desperation pass on fourth-and-20 fell incomplete in the end zone as time expired.

But the seven-point loss was a brutal bad beat for a Caesars bettor who wagered $880,000 on the Ravens +6½ early in the week, when it was unclear whether former NFL MVP Lamar Jackson would start for Baltimore.