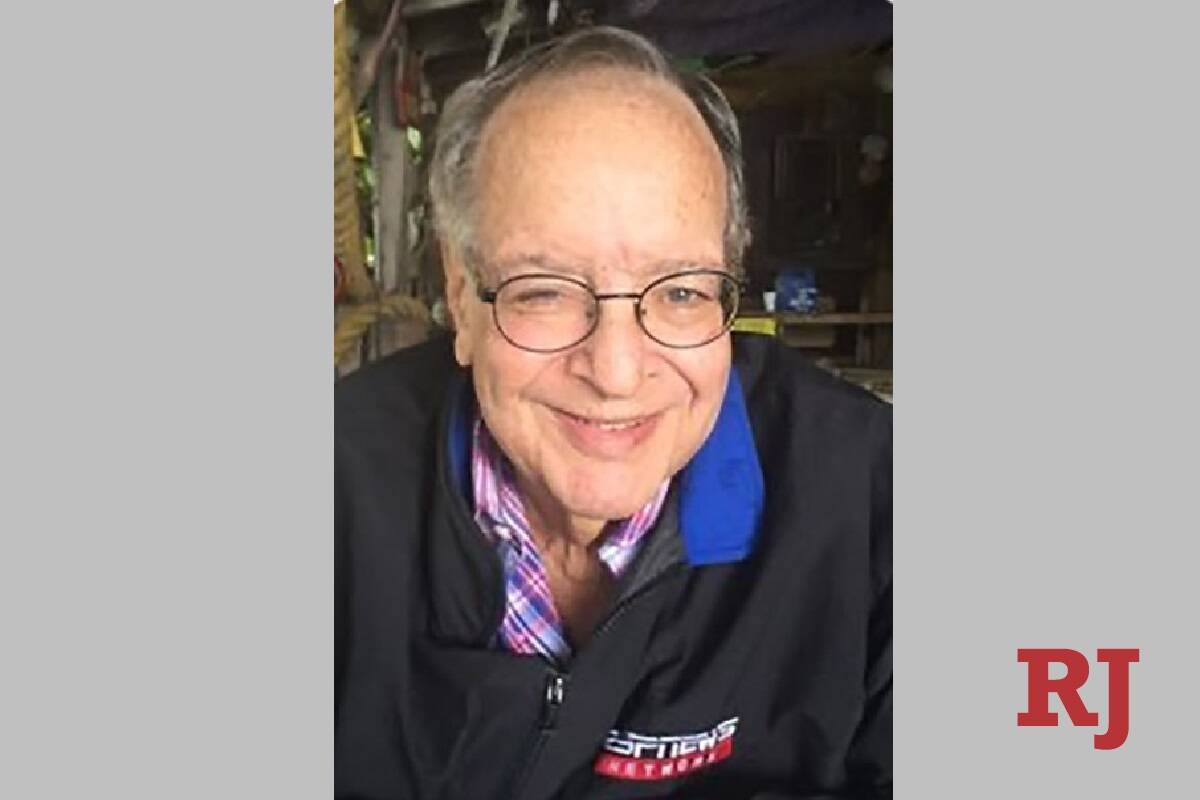 Hank Goldberg was a longtime sports betting and horse racing reporter for ESPN and ABC. He now lives in Las Vegas and reports for CBS Sports HQ and SportsLine. (Photo courtesy of Hank Goldberg) 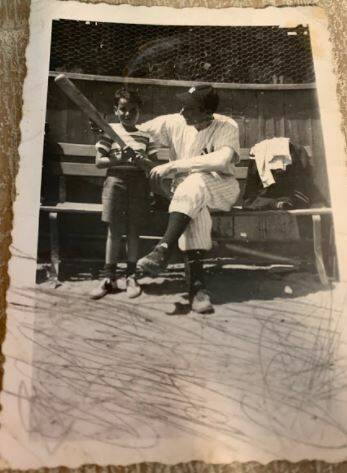 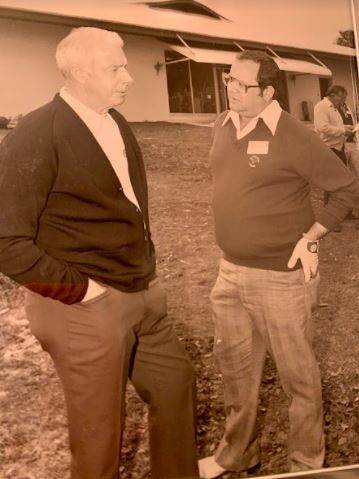 Hank Goldberg visits with Joe DiMaggio at a golf tournament. They often played golf together after DiMaggio retired. (Photo courtesy of Hank Goldberg) 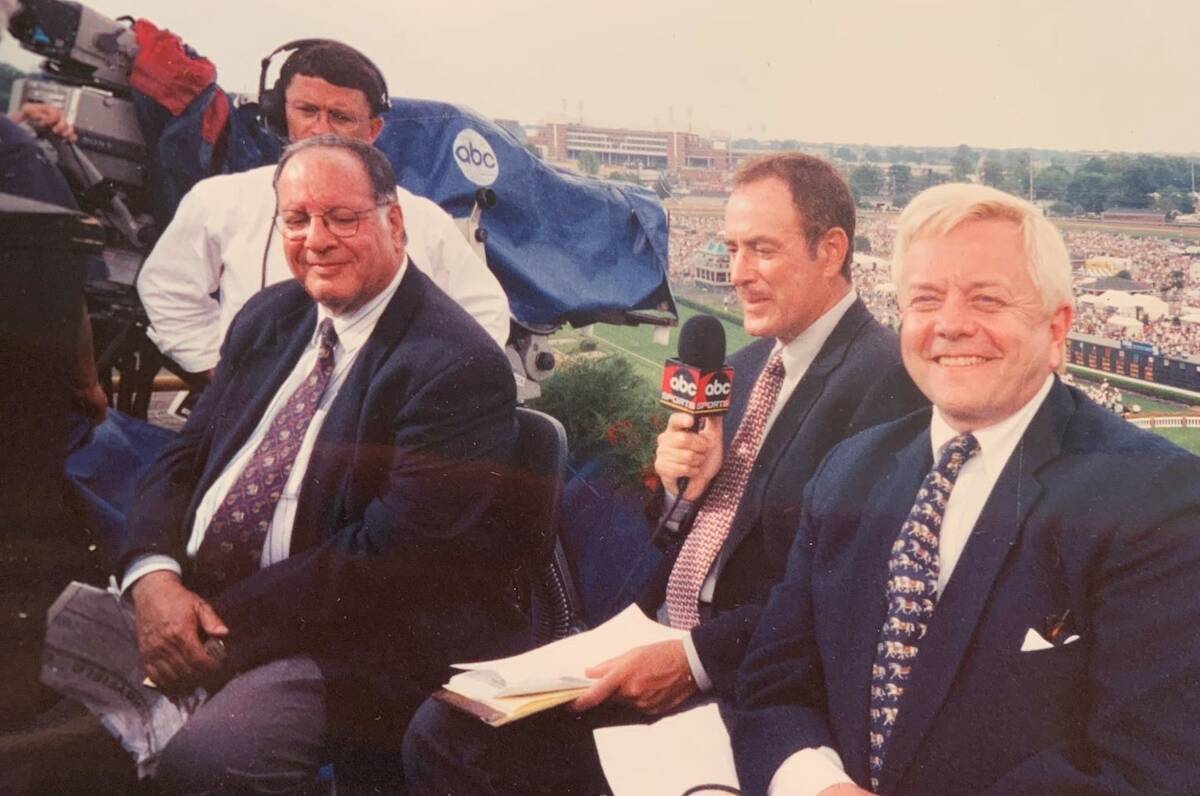 Hank Goldberg, left, sits next to Al Michaels and Dave Johnson on the ABC set at a Triple Crown race. (Photo courtesy of Hank Goldberg)

The first time Hank Goldberg went to the racetrack, he hit the daily double for $450 at Monmouth Park in his native New Jersey.

“He said, ‘Oh, you’re in trouble now.’ He knew I’d never get over my love for the races. He was right. I just fell in love with racing, and it paid off for me, of course. I wound up covering the Triple Crown for ABC.”

Goldberg, aka “The Hammer” and “Hammerin’ Hank,” has made a career out of trying to beat the odds, most notably as a longtime horse racing analyst and NFL reporter and prognosticator for ESPN.

Now 81, the Las Vegas resident has fought long odds in recent years in his battle with chronic kidney disease. Too old to qualify for a kidney transplant, Goldberg has undergone dialysis four hours a day, three days a week, for the past five years.

On Oct. 29, because of complications from the disease, Goldberg had his right leg amputated below the knee at University Medical Center.

But the surgery hasn’t robbed Goldberg of his positive outlook on life, sense of humor and passion for storytelling and sports betting. In fact, he appeared on ESPN’s “Daily Wager” show Thursday to talk about the NFL playoffs.

“I have never been depressed,” he said. “I had to take a test for my attitude and memory, and my memory has always been strong. I have a lot of stories to tell.”

In many ways, before his recent ordeals, Goldberg lived a charmed life.

His father, Hy Goldberg, was a longtime sportswriter for the Newark Evening News. Each year, Hank would accompany him to spring training with the New York Yankees in St. Petersburg, Florida.

It was the late 1940s, and Yankees legend Joe DiMaggio took a liking to “Henry,” as he called Hank. The two would play catch and remained friends for the rest of DiMaggio’s life, often golfing together.

“I treasure the days I spent with DiMaggio,” Goldberg said. “They honored him at the Orange Bowl one year, and Joe came and sat with me to watch the game.”

Goldberg attended Duke and graduated from New York University. He started working in advertising in Manhattan during the “Mad Men” era and served in the Army Reserve.

He moved to Miami to work in advertising, but soon got his first job as a sports talk show host at radio station WIOD after a recommendation from legendary talk show host Larry King, who had worked there.

“I was one of the few guys that owed Larry when he left town, because he owed everybody else money,” Goldberg said jokingly.

Goldberg said he earned the nickname “The Hammer” on his radio show for slamming down a gavel on the desk when he disagreed with his co-host.

He was the Miami Dolphins’ radio color analyst from 1978 to 1992 and also worked as a sports anchor at WTVJ.

He learned the finer points of sports handicapping from oddsmaker and “The NFL Today” contributor Jimmy “The Greek” Snyder. Goldberg said he used to ghostwrite Snyder’s syndicated column, which ran in more than 100 newspapers. And he also helped gather information for Snyder’s “The Greek’s Grapevine” TV segment.

When ESPN2 launched in 1993, Goldberg began working for the network and eventually appeared on ESPN’s NFL preview show. Davis was one of his main sources.

Former ESPN anchor and UNLV quarterback Kenny Mayne started working alongside Goldberg at ESPN2 in 1994, and they remain close friends.

“I got to know him a lot through horse racing more than anything,” said Mayne, now an ambassador for Caesars Sportsbook. “He’s a character. He reminds me of my late uncle Gordie, who taught me about horse racing. Hank has the same personality. When he comes into a room, he’s kind of big and loud and telling stories. He’s just fun to be around. And I love our Vegas connection.

“I’m trying to make sure he gets through this and gets back up and about.”

Goldberg moved from Miami to Las Vegas in 2017. His younger sister, Liz, a longtime TV executive, was already living here and has been by her brother’s side through his trials and tribulations.

“My sister has been marvelous,” he said. “I’ve been blessed to have her.”

The feeling is likewise, as Liz has marveled at her brother’s resilience.

“He’s like the phoenix,” she said. “He just keeps rising.”

“The Hammer” continues to work for CBS Sports HQ and SportsLine.com. He likes the 49ers (+5½) over the Packers and the Chiefs (-1½) over the Bills this weekend.

“The whole world is in love with Buffalo,” he said. “But I don’t think they’re going to get by Kansas City. This is a step up for them. The Chiefs are going to be very tough to beat at home.”

Goldberg’s right leg is healing well, and he had an angioplasty Tuesday that has improved the blood flow to his left foot. He said his doctor told him he will be walking in a couple of months with the help of a prosthesis.

“I stay positive because they’ve made so much progress in the area of kidney disease,” he said. “You just can’t give up.”