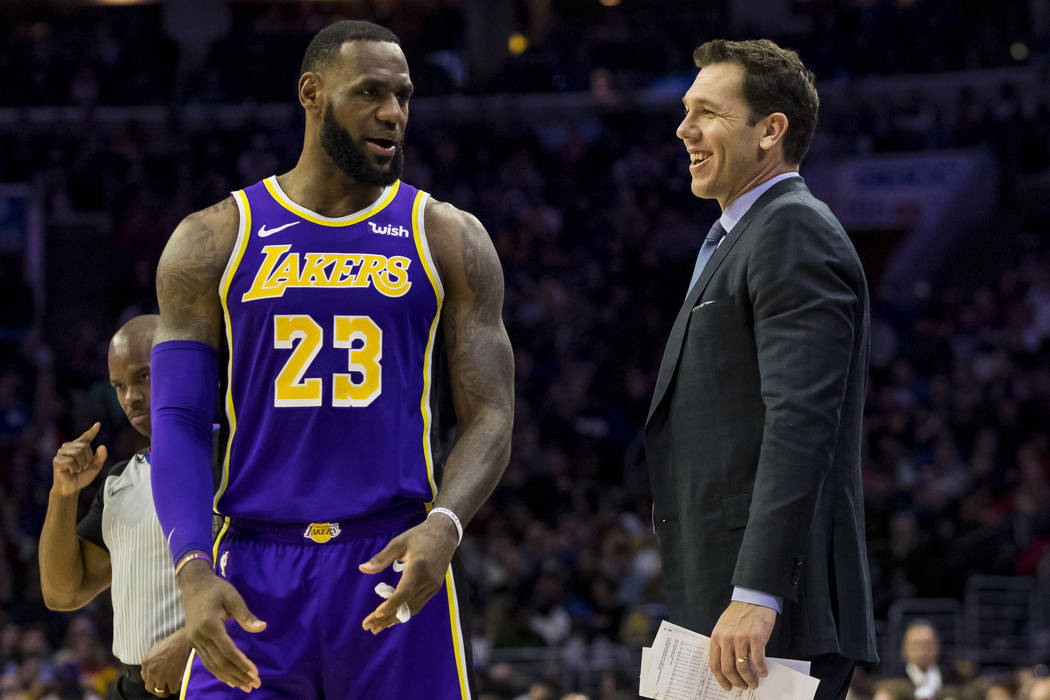 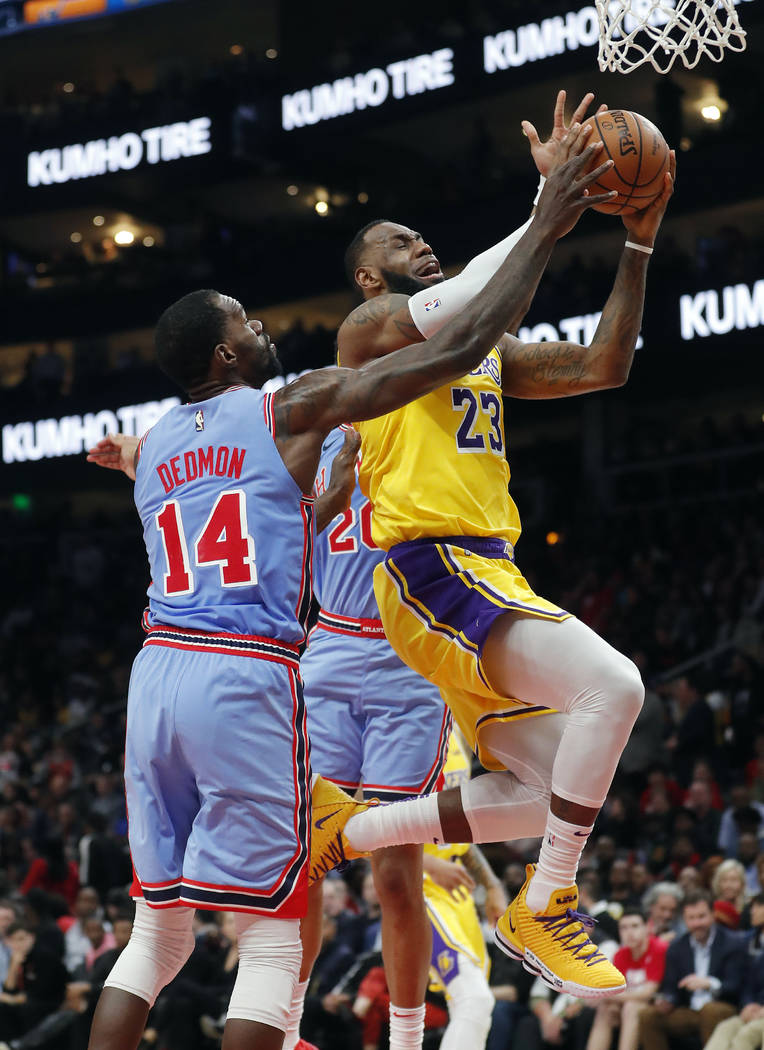 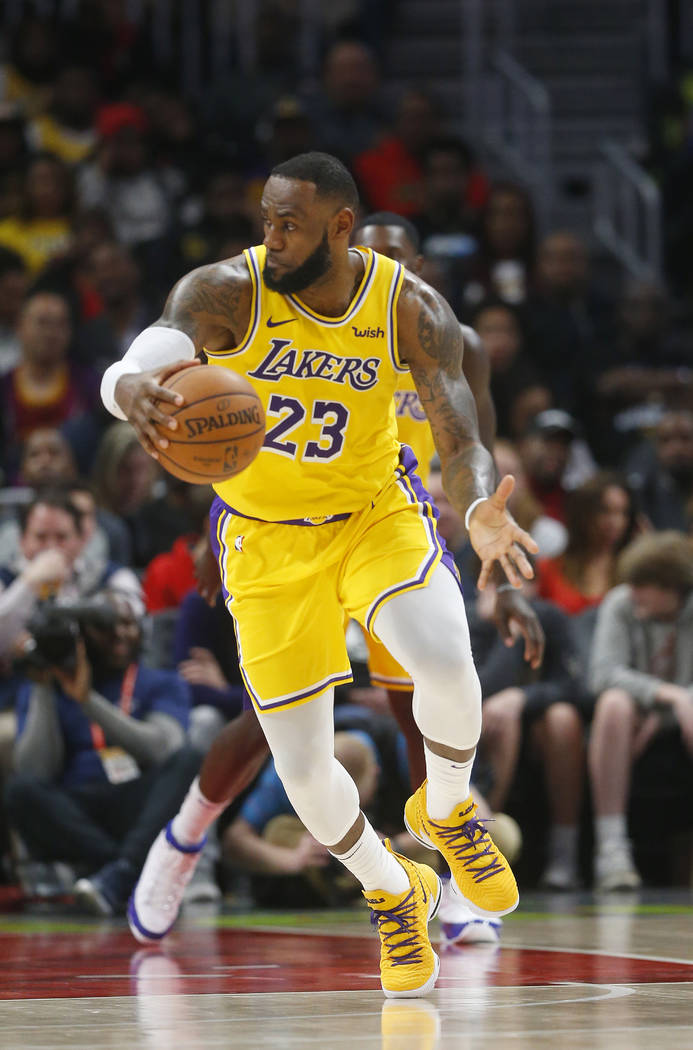 Los Angeles Lakers forward LeBron James (23) against the Atlanta Hawks during the second half of an NBA basketball game Tuesday, Feb. 12, 2019, in Atlanta. The Hawks won 117-113. (AP Photo/John Bazemore) 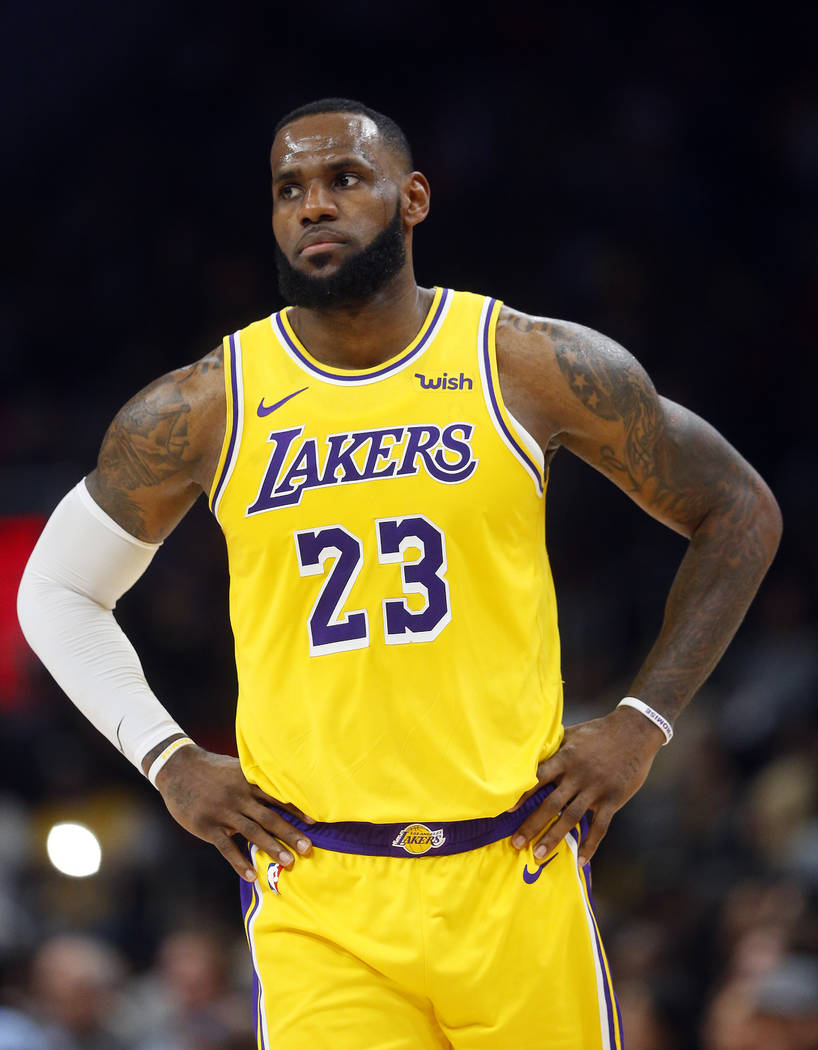 Los Angeles Lakers forward LeBron James is shown during the second half of an NBA basketball game against the Atlanta Hawks Tuesday, Feb. 12, 2019, in Atlanta. The Hawks won 117-113. (AP Photo/John Bazemore) 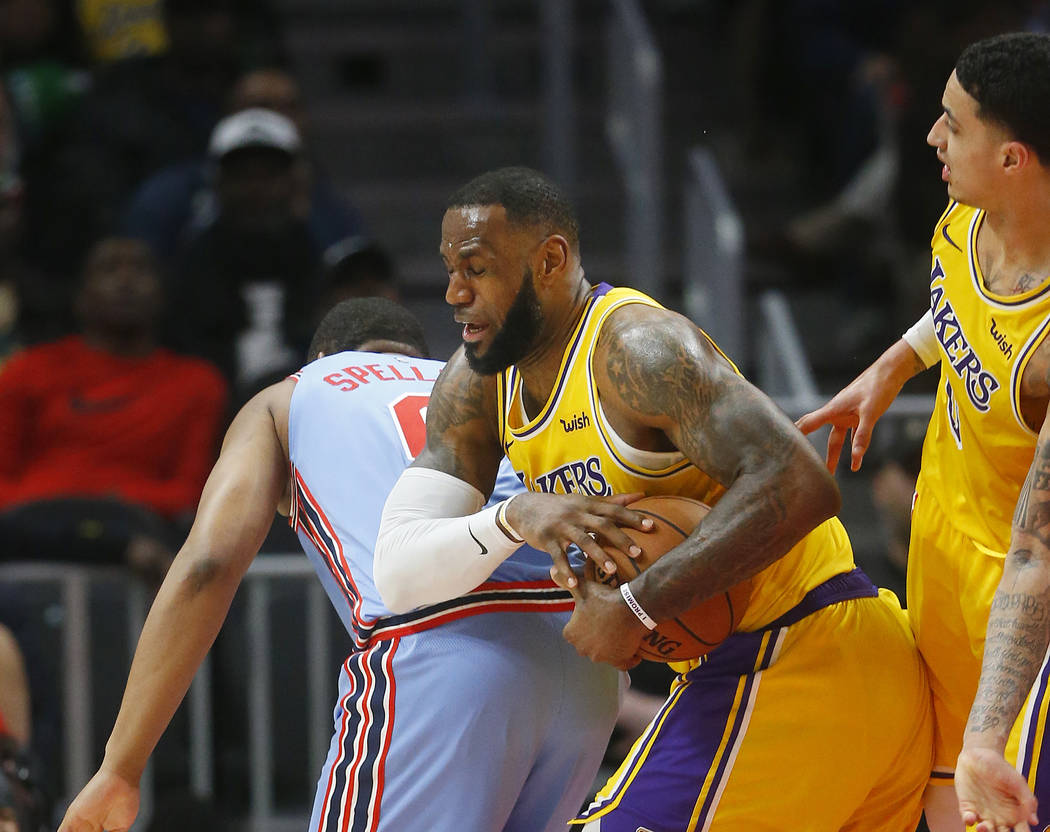 Los Angeles Lakers forward LeBron James (23) comes down with a rebound during the second half of an NBA basketball game against the Atlanta Hawks Tuesday, Feb. 12, 2019, in Atlanta. The Hawks won 117-113. (AP Photo/John Bazemore) 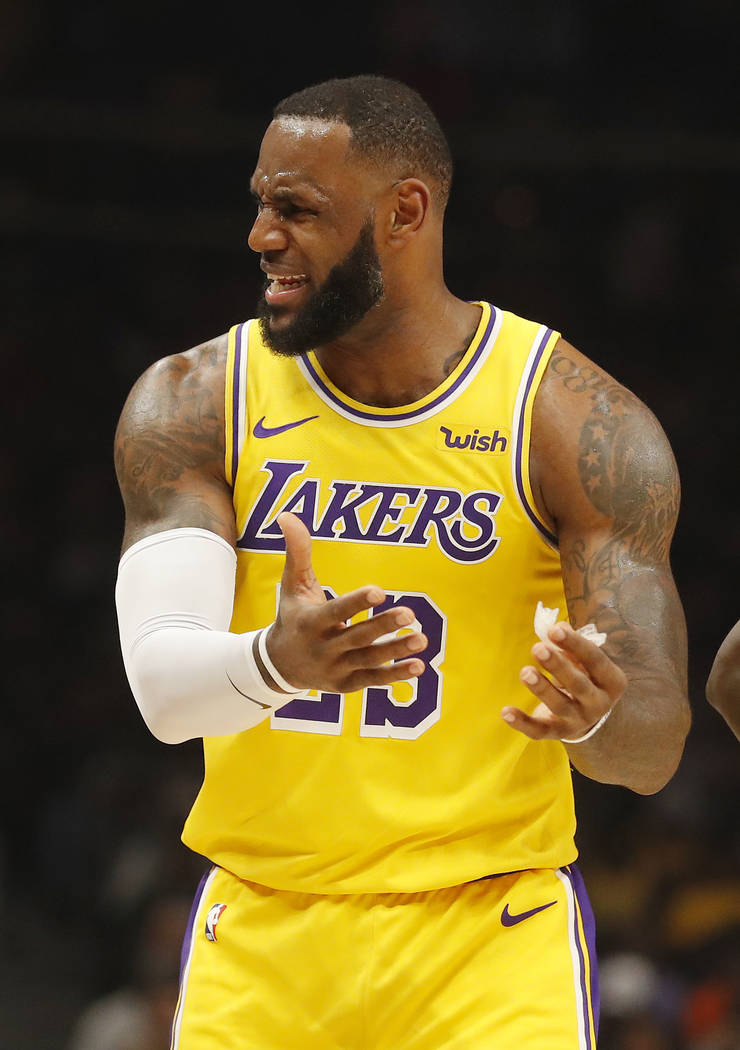 Los Angeles Lakers forward LeBron James (23) argues with an official during the first half of an NBA basketball game against the Atlanta Hawks Tuesday, Feb. 12, 2019, in Atlanta. (AP Photo/John Bazemore) 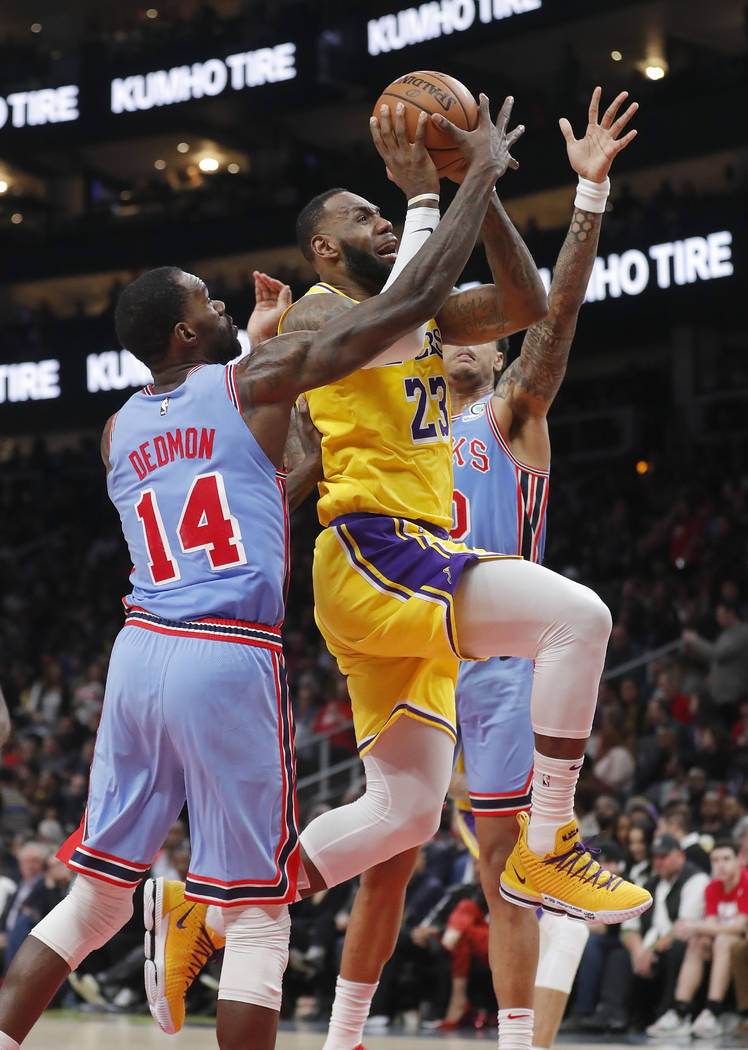 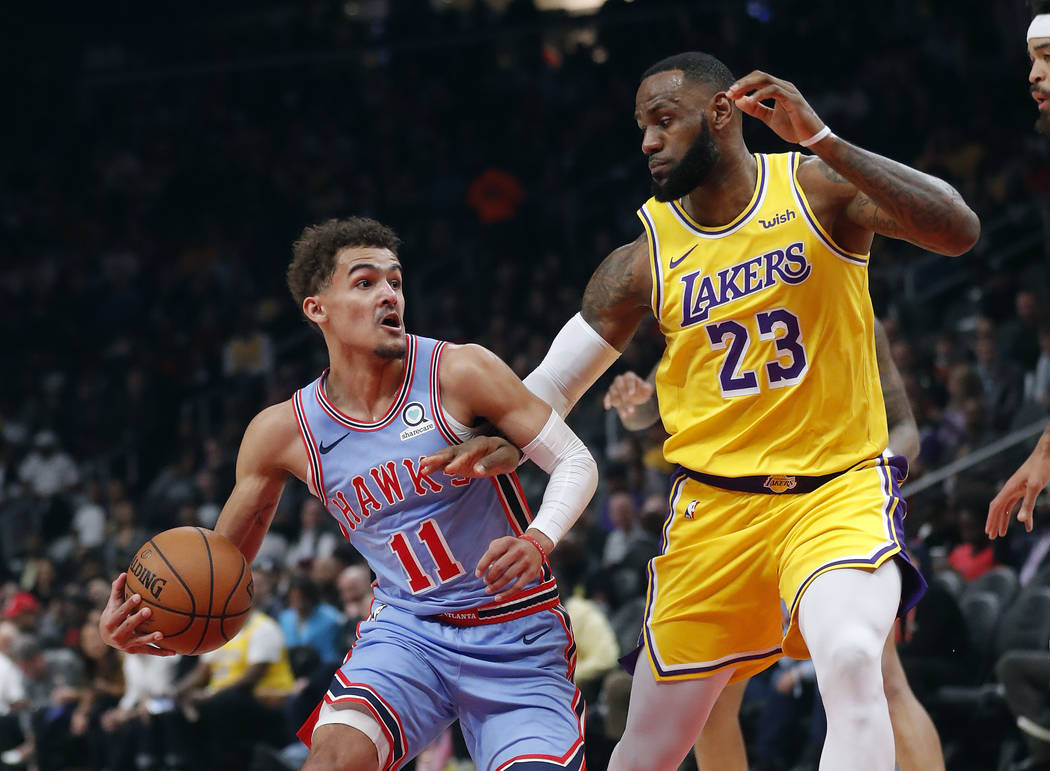 But his playoff streak is in jeopardy in his first season with the Los Angeles Lakers.

Entering Thursday’s games, the Lakers were 28-29 and trailed the Clippers by three games in the race for the Western Conference’s eighth and final playoff spot.

Will the Lakers make the playoffs? That proposition has generated six figures worth of wagers at the Westgate sportsbook since it reposted postseason odds on the Lakers over the NBA All-Star break.

“The action we’ve had on it has been nuts,” Westgate sportsbook manager Jeff Sherman said. “The Lakers are so polarizing. They have so much interest, whether you’re supporting them or betting against them.”

Sharp action on no pushed it as high as a minus 145 favorite, where it closed before Thursday’s Rockets-Lakers tipoff.

The Westgate initially planned to take down the prop Thursday, but now plans to repost it Friday because of popular demand.

“We’ll talk Friday and readjust it,” Sherman said. “We’ll try to do it a little longer than we anticipated just because there’s been so much interest in it.”

The Lakers lost eight of 11 before the All-Star break, capped by a 117-113 loss at Atlanta as 6-point favorites. Sherman, a lifelong Lakers fan, said he leans to them not making the playoffs.

“I thought they needed to win that game against Atlanta,” he said. “It wouldn’t surprise me if they have more games like that coming down the stretch where they’re favored to win and throw something like that out there.

“They can’t just turn on the switch like LeBron did in the Eastern Conference. They’re dealing with a lot of young kids who still have a somewhat fragile mentality.”

The Milwaukee Bucks entered the All-Star break with a league-leading 34-20-3 ATS record behind Giannis Antetokounmpo, the minus 110 co-favorite with James Harden to be named league MVP.

The Warriors entered Thursday with the best record in the West at 41-16 and are the minus 250 favorites to win their third consecutive NBA title and fourth in five years. But they haven’t been able to consistently cover inflated lines during the regular season, limping into the break on a 1-6 ATS slide.

“Their lines are inflated a little bit because we expect the public’s support, especially on the road when they’re laying four to eight points rather than double digits at home,” Sherman said. “It’s the same way with the Raptors. They’re often small road favorites and decent-sized favorites at home. It’s tough to cover those larger numbers on a consistent basis.”