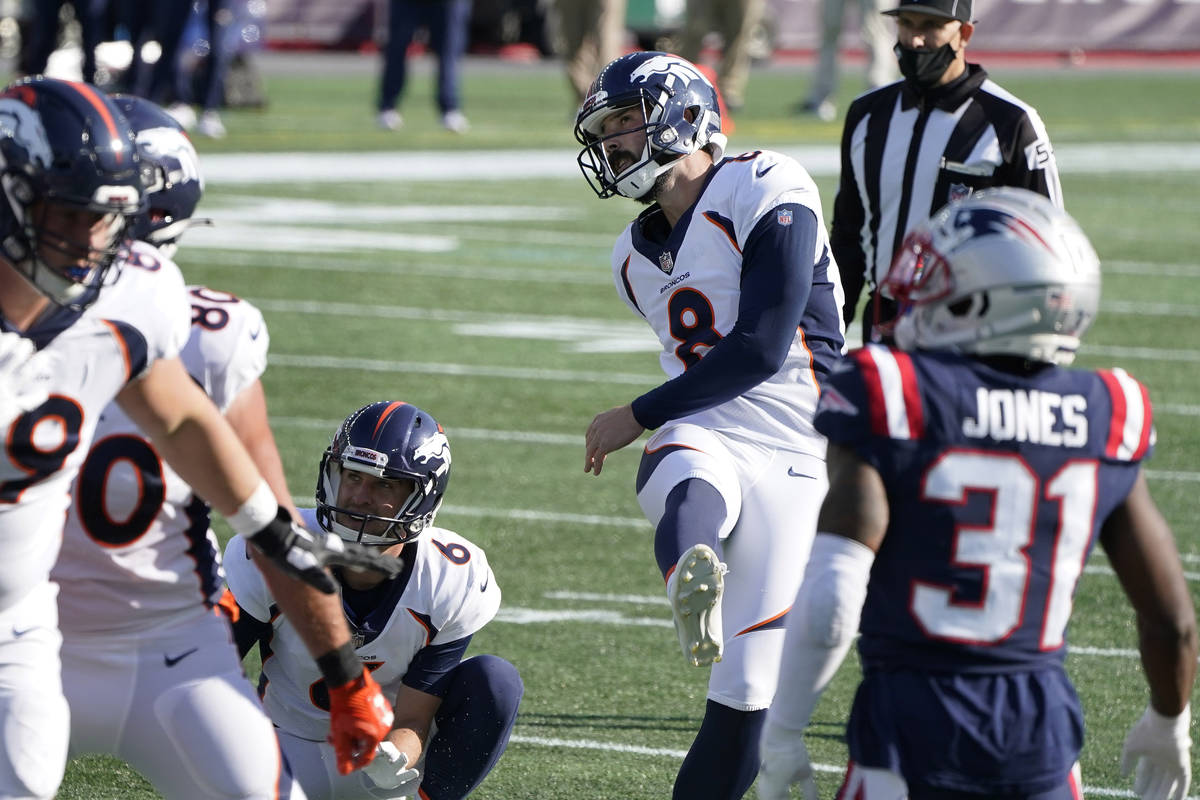 Denver Broncos place kicker Brandon McManus (8) follows through on one of his six field goals against the New England Patriots in the second half of an NFL football game, Sunday, Oct. 18, 2020, in Foxborough, Mass. (AP Photo/Steven Senne) 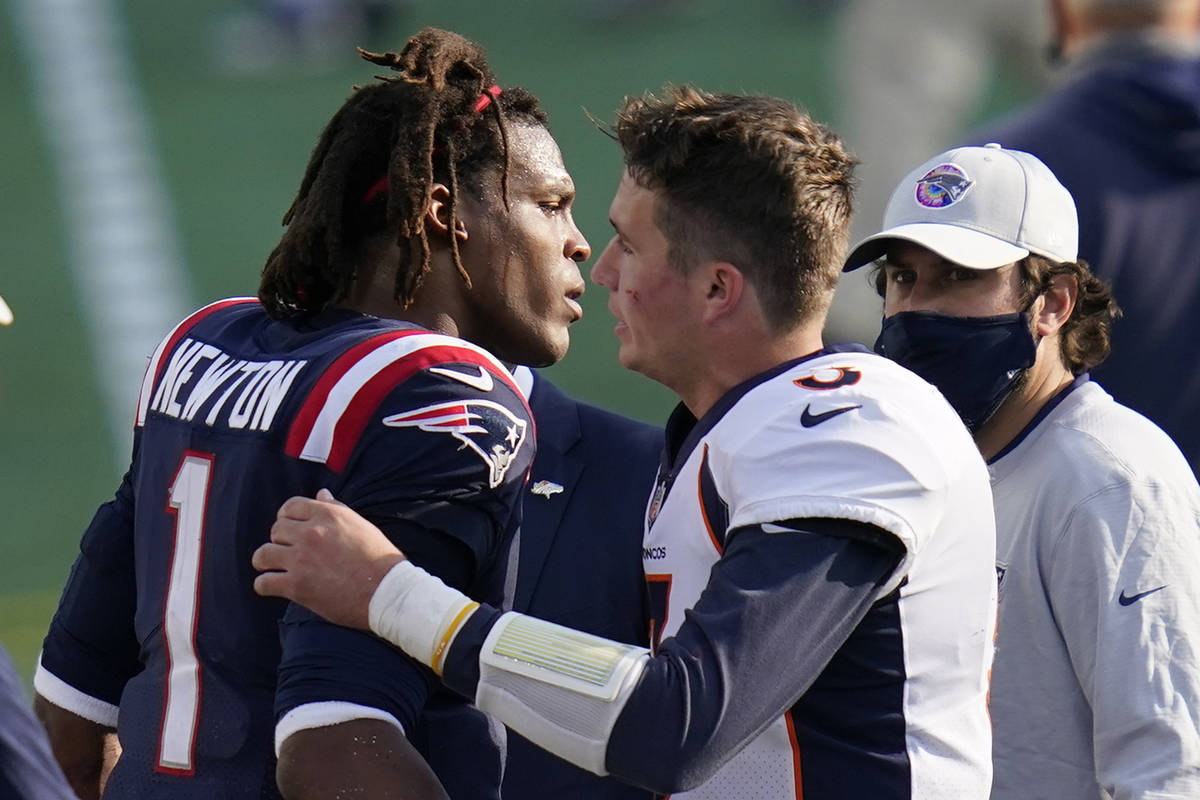 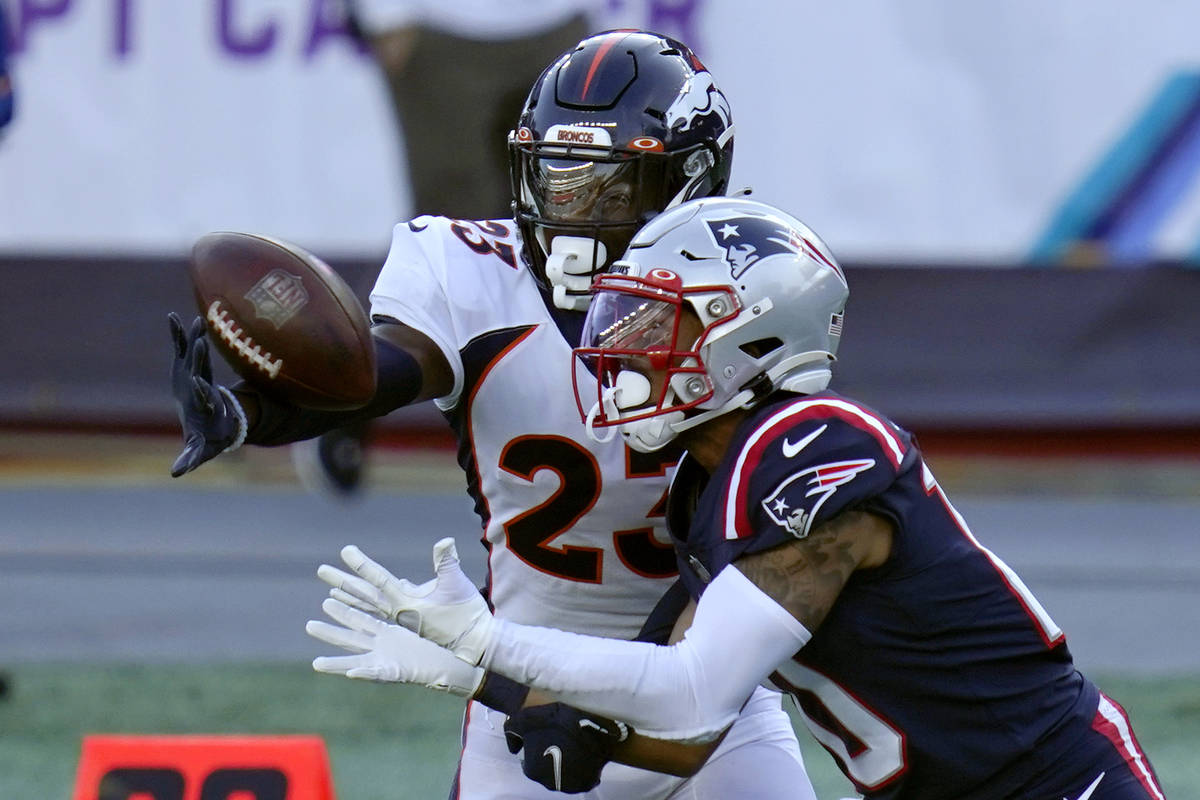 You know you’re on a bad run when you seem to lose every game in historic fashion.

Bad beats are painful. But an ordinary loss by the Rays in Game 6 of the American League Championship Series stung their backers a bit more than usual Friday when they heard that the Astros were only the second team in baseball history (117 years) to force a Game 7 after trailing 3-0.

Likewise, Auburn bettors already felt bad enough Saturday after losing 30-22 as 3-point favorites before they were reminded that it was the first time South Carolina had beaten Auburn since 1933.

The beat went on in the NFL, where Patriots bettors could only shake their heads after an 18-12 loss to the Broncos upon learning that New England (-7) had been 39-0 when not allowing a touchdown before Sunday’s defeat to Denver.

“If someone had said the Broncos are not going to get in the end zone against the Patriots, I’d say where do I sign up to bet the Patriots?” The Mirage sportsbook director Jeff Stoneback said.

Fifty-one people who put up $1,000 each to sign up for the Circa Survivor contest picked the Patriots and were eliminated. Countless other New England bettors lost on teasers and money-line parlays in the biggest win of the day for BetMGM, which took a $270,000 straight bet and a $100,000 money-line wager on the Patriots.

Thanks to underdogs going 8-4 ATS with five outright upsets, including Tampa Bay’s 38-10 win over Green Bay, it was a banner day for Las Vegas sportsbooks.

“Overall, it was probably the best Sunday of the year,” Sunset Station sportsbook director Chuck Esposito said. “One of the biggest decisions of the year so far was the afternoon game between the Packers and Buccaneers. There was a late push with a lot of Packers money. We were certainly Bucs and under fans and we got both of them. That was huge.”

Green Bay, which closed as a 2½-point favorite, took a quick 10-0 lead. But then Aaron Rodgers threw a pick-six and Tampa exploded for 38 straight points.

Over bettors had to like their chances to top the total of 55 points when the Bucs scored to make it 38-10 with 2:40 left in the third quarter. But the fourth quarter was scoreless and Tampa backup quarterback Blaine Gabbert kneeled at the Green Bay 21 to run out the final 62 seconds.

Philadelphia trailed 30-14 before rallying for two touchdowns in the final 3:48 to cover and kill all Baltimore teasers.

Atlanta dominated Minnesota for its first win in its first game since coach Dan Quinn was fired.

Bettors cashed in on the Dolphins, who cruised to a 24-0 win over the Jets, easily covering the 9-point spread while keeping New York winless ATS (0-6).

A DraftKings bettor won a $2 million money-line parlay on Miami and Detroit that paid $2.1 million. The gambler barely broke a sweat as the Lions whipped the Jaguars, 34-16.

Bettors also won on the Titans, who improved to 5-0 with a miracle win and cover in a 42-36 overtime win over the Texans. Tennessee bettors owe a debt of gratitude to Houston coach Romeo Crennel, who made the ill-advised decision to go for two late in the game when an extra point would’ve given the Texans an eight-point lead.

Houston went ahead 36-29 with 1:50 left on Deshaun Watson’s 1-yard TD pass to Brandin Cooks. That’s when Crennel became overanalytical and went for two to try to make it a nine-point game instead of forcing the Titans to score a TD and two-point conversion to tie.

“It makes no sense,” Esposito said. “It’s easy to play Monday morning quarterback. But some coaches have definitely made suspect calls.”

After Watson’s two-point pass attempt fell incomplete, Ryan Tannehill directed a 76-yard drive capped by a seven-yard TD pass to A.J. Brown with four seconds left. Tennessee wisely kicked the extra point to send the game to OT, where it won the toss and promptly marched 82 yards for the winning score on a five-yard TD run by Derrick Henry.

Cleveland bettors could only kick themselves after seeing the stat that Pittsburgh has now won 17 straight home games against the Browns.