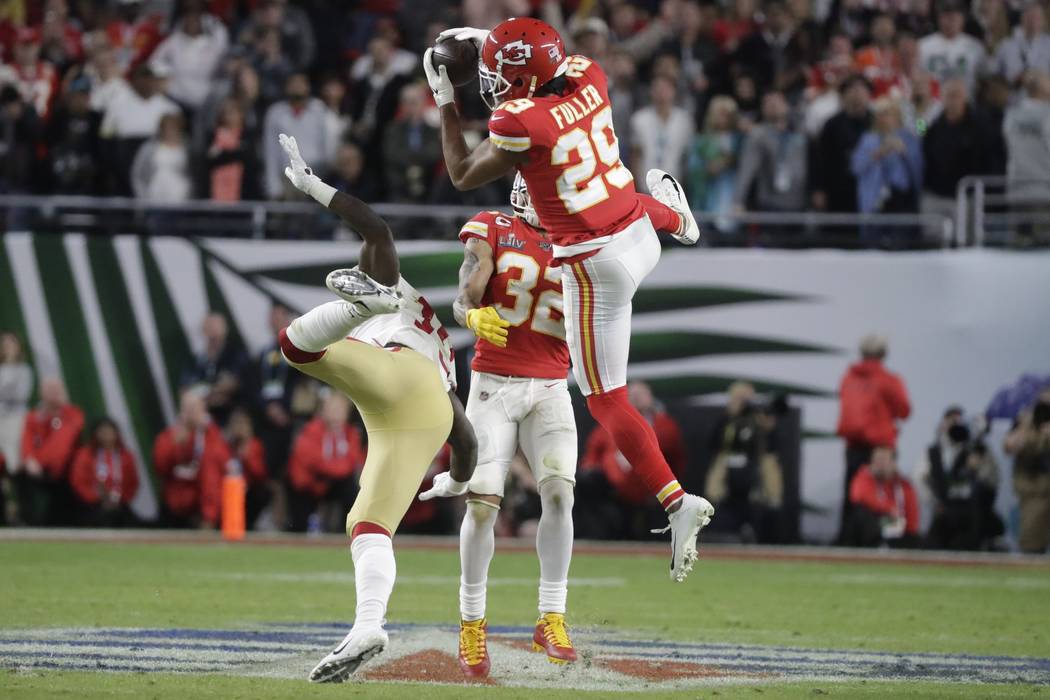 When betting totals, it’s not under until it’s over.

The under on the Super Bowl LIV total, which closed at 53 after climbing as high as 55, looked like a lock Sunday when the 49ers were leading the Chiefs 20-10 with less than seven minutes left.

But it got a little interesting after Patrick Mahomes threw two touchdown passes and Damien Williams added a late TD run to give Kansas City a 31-20 lead, and San Francisco took over at its own 25 with 62 seconds left.

A botched desperation lateral would have given bettors a miracle over. But the game stayed under when a deep pass by Jimmy Garoppolo was intercepted, giving Las Vegas sportsbooks their biggest win of the day.

“The total is really what we were sweating more than anything,” Caesars Entertainment sportsbook director Bill Sattler said. “It didn’t matter who won this year.”

It was the same scenario at every other Las Vegas book.

“The total dropped due to sophisticated play, but the public played both teams and the over,” Sunset Station sportsbook director Chuck Esposito said. “Keeping the game under as an industry, everyone should shake out OK.”

And a bettor who won more than $2 million betting college bowl games and the NFL playoffs dropped $1.9 million Sunday on a variety of bets on San Francisco and over in the first quarter, first half, second half and game.

“I know for a fact that it’s our best Super Bowl (at MGM) since at least 2008,” The Mirage sportsbook director Jeff Stoneback said. “We had the best-case scenario, Chiefs and under.”

The 49ers appeared to be cruising to their sixth Super Bowl win up 10 midway through the fourth quarter, when their previously stout defense forced the Chiefs into third and 15 at their 35.

However, Mahomes then lofted a 44-yard pass to a wide-open Tyreek Hill, and the Chiefs scored four plays later to start the winning rally.

“It was over,” William Hill sportsbook director Nick Bogdanovich said. “Then before you knew it, the magic struck.

“The play that turned it around, it looked like he was throwing the ball up for grabs and Tyreek Hill ran under it.”

The Niners then went three and out, and Mahomes hit Damien Williams for a go-ahead 5-yard TD pass with 2:44 left.

A FanDuel bettor in New Jersey lost a $267,600 prop bet on Williams to go under 53½ rushing yards as the Chiefs running back finished with a game-high 107 yards rushing.

The worst beat of the Super Bowl was arguably on Mahomes’ rushing yards prop. It was bet up from 30½ to 36½ at William Hill, where it was the most popular prop in terms of money wagered.

Bettors were celebrating and counting their winnings when Mahomes surpassed his total on a 9-yard scramble with 8:33 left in the game.

Mahomes had 44 yards rushing when Garoppolo threw an interception to all but end the game with 57 seconds left. But then disaster struck for Mahomes’ over bettors.

As the Chiefs ran out the clock, the QB knelt three times for a total loss of 15 yards. Mahomes finished with 29 yards rushing as the prop went under.

The best prop for the books was Mahomes winning Super Bowl MVP. He opened as the even money favorite and closed at -120 at William Hill.

The worst prop for the books was Mahomes scoring the game’s first touchdown. He opened at 20-1 at the Westgate and also was 5-1 at William Hill to have a rushing TD.

“That was a pretty hefty six-figure swing between Darwin Thompson scoring the first TD, and he got down there within six inches, and Mahomes,” Westgate Vice President Jay Kornegay said.

The Westgate took another hit when San Francisco fullback Kyle Juszczyk, who didn’t score a TD all season, scored the first TD for the 49ers, cashing at 15-1.

“We had a lot of money on that,” Kornegay said. “We kind of got off to a rough start. But from that point on it was an easy watch because it was on an under pace, and that’s what we really needed.”