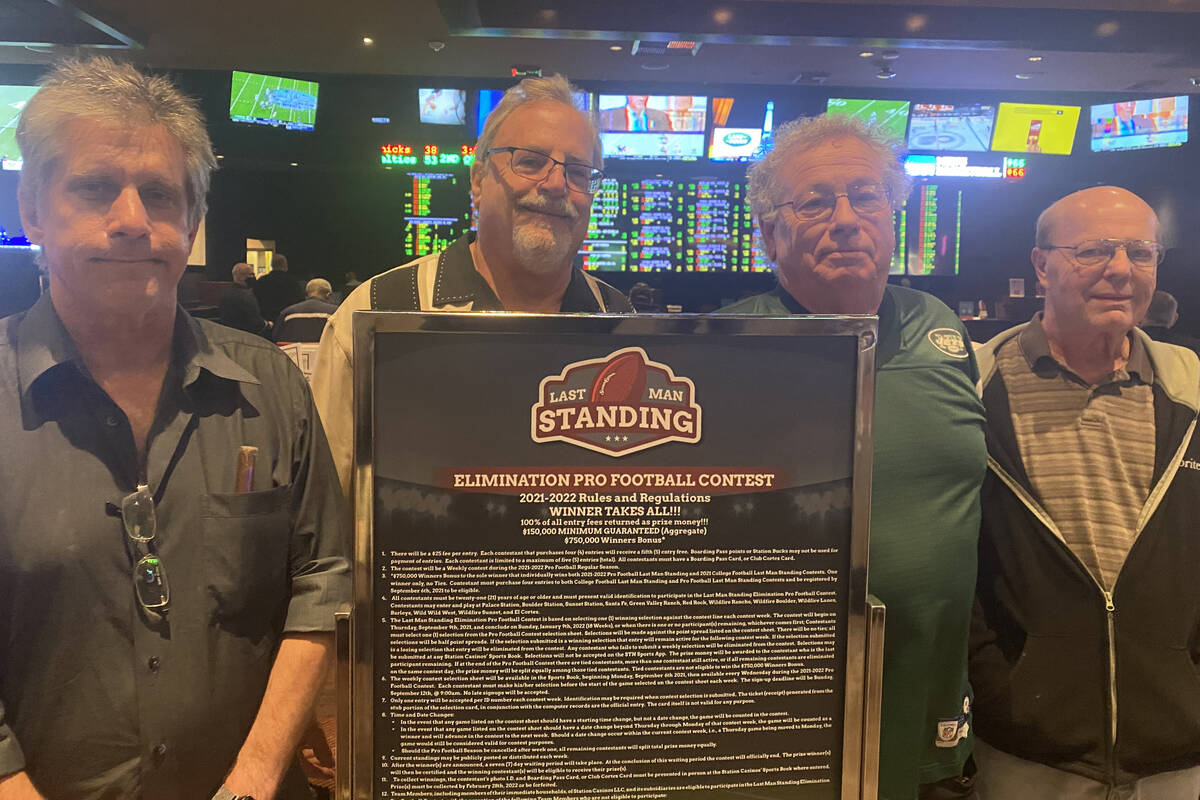 In the movie “Let It Ride,” horse bettor Jay Trotter, played by Richard Dreyfuss, takes an informal survey at the track, bets all of his money on the one horse that wasn’t mentioned and wins $69,000.

“When I’m in the sportsbook, and four or five people tell me they like the same team, I will either take the other side or not bet the game,” said Parsels, 67. “Even if I like the same side.”

Parsels and Weiss, an environmental attorney from Los Angeles, were the two official contest winners, collecting $75,000 each for outlasting a field of 6,241 entries.

But Parsels partnered in the contest with Grimm, a retired Las Vegas resident, and Weiss partnered with Zeniuk, a Las Vegas-based pro sports bettor.

When Parsels and Zeniuk learned through their mutual friend Grimm that they were the final two men standing in the contest after Week 10, they quickly decided to chop the pot.

“It was unbelievable. It was so smooth,” Zeniuk said. “We didn’t even have to talk to each other to know that we were chopping this baby.”

In Last Man Standing, entries pick one game against the spread each week and are eliminated with a loss. Entries cost $25 each, with a maximum of five for $100.

Parsels and Weiss each had been down to their final entry for weeks when the field was whittled to six after Week 9. Parsels barely escaped Week 10 with the Saints (+2½), who lost 23-21 to the Titans. Weiss easily advanced with the Patriots, who blew out the Browns 45-7.

To ensure they would split the prize, Parsels and Weiss submitted the same picks together in Week 11, when they won on the Patriots, and Week 12, when they were eliminated on the Cowboys’ loss to the Raiders on Thanksgiving.

“There was no way to hedge because the other person is not guaranteed to lose,” Zeniuk said. “The only way that you can hedge is in the final week. I wouldn’t play somebody that didn’t even know what football was heads up (for $150,000). It’s silly because anyone can win.”

Zeniuk and Parsels are essentially two-time winners of the LMS, though they’ve won only one each under their own names.

“He did all the picking,” said Grimm, 70. “Benny is the most generous person you’ll ever meet.”

Likewise, Weiss let Zeniuk have the final say on picks.

“We put our heads together, but he does all the data crunching to make sure we put in the right number,” said Weiss, 65.

When the 2018 LMS was down to Parsels and another entry, Zeniuk found the other finalist on social media and the two contestants chopped the $56,550 pot.

“I try to pay it forward and help other people out,” said Zeniuk (@lasvegascris). “When it gets down to that point, it’s the only prudent and practical thing to do. By me doing that, they saved a lot of money that they might’ve lost trying to hedge.”

“Minnesota ended up losing by 14, and we won the hedge and the contest with a dead nuts miracle middle,” he said.

“It’s important to avoid the games that everybody else is going to be on,” he said. “Just because the line has moved since the Wednesday release time, it doesn’t mean you want to take that line value. Sometimes you take it, but you want to look for a way not to take it.”