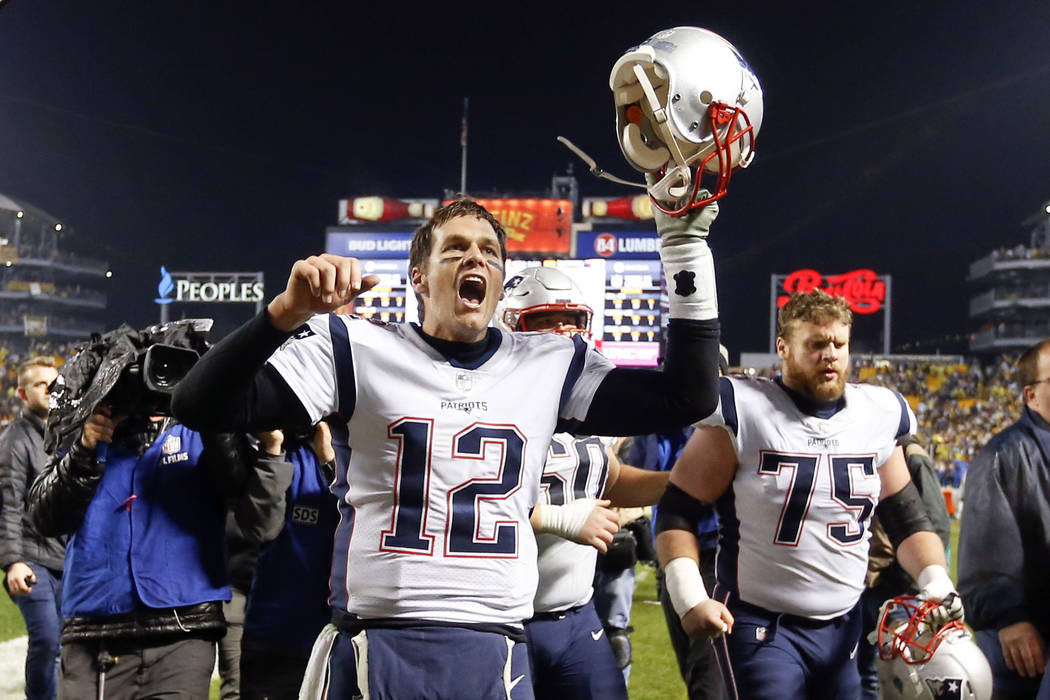 However, an MGM Resorts bettor still had a chance to survive his six-figure money-line wager on Pittsburgh, which trailed 27-24 with 28 seconds left.

With the clock running and no timeouts left on third down, Ben Roethlisberger could have spiked the ball to set up a tying field goal. But the Steelers quarterback faked a spike instead and fired a pass to Eli Rogers in the end zone that was deflected and intercepted by Duron Harmon.

New England, which closed as a 3-point favorite at MGM Resorts sports books and a 2½-point favorite at most other books, escaped with the win and drove a stake through the hearts and wallets of most Pittsburgh backers, including one high roller in particular.

“That’s one of your top 10 bad beats of the season,” The Mirage sports book director Jeff Stoneback said. “Worst-case scenario, you’re going into overtime. Then you basically get the win stolen away from you.

“We got bailed out right there. We should’ve actually been a decent-sized loser for the game because the public was on the Patriots.”

Count Stoneback among the masses who don’t agree with the NFL rules on what constitutes a catch.

“It’s unbelievable that what 99 percent of people think is a catch is not a catch,” he said.

The bettor who lost six figures on the Steelers chased his losses with a six-figure wager on the Cowboys as 3-point favorites (minus-105) over the Raiders on “Sunday Night Football.”

“He doubled up on the Cowboys,” Stoneback said before the Sunday night game. “That’s going to be our whole day. If the Raiders cover, we’re an OK winner. If the Cowboys cover, we’re a decent-sized loser for the day.”

Dallas and the big bettor pushed in a 20-17 win over Oakland after Derek Carr lost a fumble out of the end zone for a touchback with 31 seconds left. The Cowboys blew leads of 10-0 and 17-10 and had to settle for a tiebreaking field goal to go ahead 20-17 with 1:44 left after twice getting stuffed at the 1-yard line.

Favorites are money in Week 15

Any money-line wager on an NFL favorite in Week 15 was a winner as favorites are 13-0 straight up, with the Rams and Chiefs closing as a pick’em in their blowout wins. Favorites went 11-0 straight up on Sunday (7-2-2 ATS).

“If you were to show me these scores on Friday, I just would’ve been shaking my head and maybe broke out into a sweat,” Westgate sports book director Jay Kornegay said. “But we actually escaped a large loss. We are a small loser.”

The books were bailed out a bit by the Pats-Steelers game staying under the total and by the Jets covering as 15½-point underdogs at the Saints and the Giants covering as 7½-point home underdogs to the Eagles.

Philadelphia escaped with a 34-29 win over New York — and covered all teasers in the process — when Eli Manning’s fourth-down pass into the end zone fell incomplete in the final minute. But Eagles bettors, myself included, might’ve covered if not for a terrible penalty late in the third quarter.

Nick Foles fired his fourth TD pass to put Philadelphia ahead 31-23 after it trailed 20-7. The Eagles then forced a three-and-out, but Najee Goode was inexcusably penalized for offsides on the ensuing punt. The Giants were awarded a first down and marched 80 yards for a TD that ultimately cost Philadelphia bettors the cover.

The Eagles drove to the Giants 2-yard line with 3:56 left in the game before settling for a dreaded field goal.

The public was all over big favorites that easily covered in the Vikings, Jaguars and Ravens, who dropped the Browns to 0-14.

“Once again, the Browns were our biggest loser,” Stoneback said. “It’s like a broken record.”

The books got middled on the 49ers, who opened as 1-point underdogs to the Titans and closed as favorites of either 2 or 2½ points in a 25-23 win. Bettors are backing quarterback Jimmy Garoppolo, who looks and plays like the love child of Steve Young and Joe Montana.

He threw for 383 yards and a TD and set up Robbie Gould’s game-winning 45-yard field goal as time expired to improve to 3-0 as a starter for the Niners, who were the top consensus play in the Westgate SuperContest.

“For them to be on the top of the list was surprising to me,” Kornegay said. “They really are warming up to Jimmy G. I can’t remember the last time the 49ers were in that spot.”