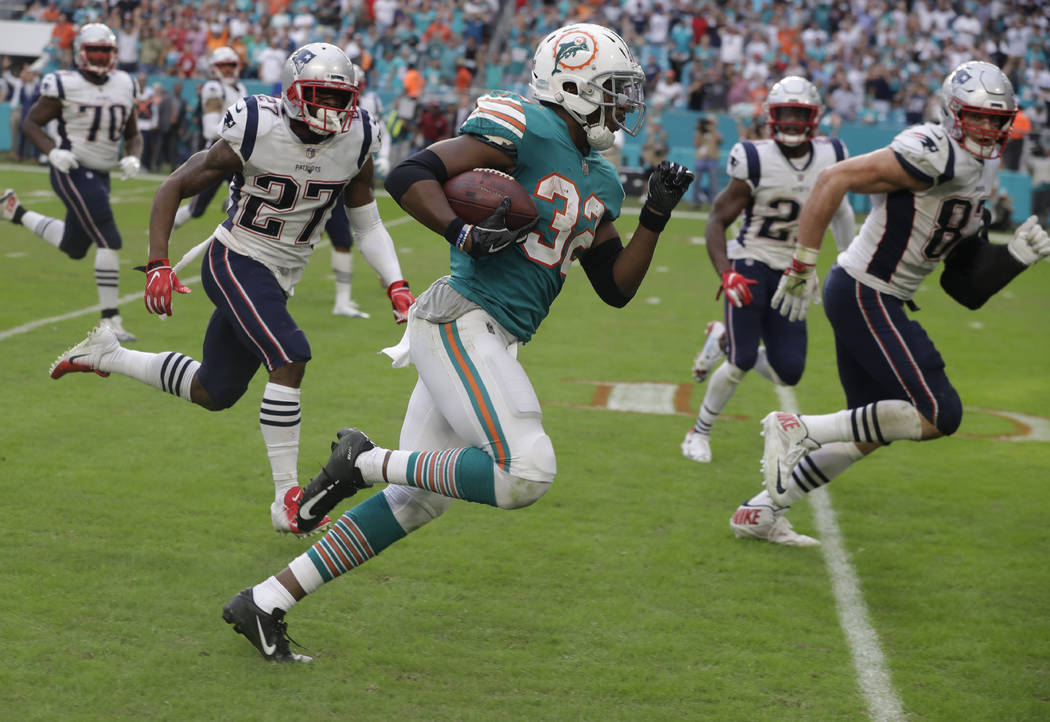 Miami Dolphins running back Kenyan Drake (32) runs for a touchdown during the second half of an NFL football game against the New England Patriots, Sunday, Dec. 9, 2018, in Miami Gardens, Fla. The Dolphins defeated the Patriots 34-33. (AP Photo/Lynne Sladky)

The “Miami Miracle” was a nightmare for New England bettors.

More than $1 million swung from gamblers to Las Vegas sports books Sunday when the Dolphins scored a 69-yard touchdown on a pass and double lateral on the final play of the game to pull off a shocking 34-33 upset of the Patriots.

Kenyan Drake ran the last 52 yards for the longest game-winning TD from scrimmage as time expired in NFL history. With apologies to Jerry Seinfeld, Patriots bettors don’t love the Drake.

New England closed as a 9-point favorite after the line was at 7½ most of the week. The point spread wasn’t affected by seemingly the first last-second lateral play that has worked since Cal-Stanford in 1982. But the extraordinary ending killed countless teasers and money-line wagers, including multiple five-figure money-line bets at Caesars Entertainment.

“A lot of people look at teasers and big money-line bets like a big show bet on the horses,” Caesars Entertainment sports book director Bill Sattler said. “It’s not a sure thing, but there’s good odds they’ll be cashing.”

The play resulted in a seven-figure swing at William Hill alone, and MGM Resorts reported a six-figure swing.

Making the loss more painful for Pats bettors was the fact that they were on the cusp of covering. Forget Stephen Gostkowski missing an extra point and 42-yard field goal try and Tom Brady taking a sack at the Miami 9 to end the first half. New England had a chance to push the lead to nine as it faced first-and-goal at the 7 with 1:50 left.

But the Patriots opted for three straight runs up the middle before settling for a field goal to give the Dolphins one last chance.

“That’s what’s so crazy about the NFL,” The Mirage sports book director Jeff Stoneback said. “With a minute to go, you’re looking at possibly covering the 8½-point spread. And a minute later, if you have a money-line bet, you’re a loser.”

Stoneback said it was one of the top two or three NFL Sundays of the season for his book. Not surprisingly, underdogs dominated, going 9-5 ATS with seven outright upsets by the Dolphins, Colts, Browns, Jets, 49ers, Raiders and Bears.

Oakland beat the Steelers 24-21 as 10-point underdogs in one of the biggest upsets of the season and best games of the day for the books.

“It was a solid day, and the Raiders game was definitely icing on the cake,” Wynn Las Vegas sports director Doug Castaneda said before the Sunday night game. “We had a lot of play on the Steelers and some profound play on the money line.”

Castaneda, who recently replaced Johnny Avello, said one Wynn bettor lost a six-figure money-line wager on Pittsburgh, which closed at minus 650.

Another Wynn bettor lost a six-figure straight bet on the Chiefs, who rallied for a 27-24 overtime win over the Ravens but didn’t cover the 6½-point spread.

Besides the Raiders and Ravens, books won big on the Browns and Colts, who beat Houston 24-21 as 4-point underdogs to end the Texans’ nine-game win streak.

Cleveland came from behind to beat Carolina 26-20 as a 1-point home ‘dog.

“We took a six-figure bet on the Panthers,” Stoneback said. “And the public was all over the Chiefs.”

The books capped off another banner day when the Bears beat up the Rams in a 15-6 win Sunday night as 3-point home ‘dogs in a game that generated heavy action at Station Casinos.

“This was one of the highest bet handles, similar to a playoff game,” Sunset Station sports book director Chuck Esposito said.

The Westgate SuperContest consensus top five (Colts, Chiefs, Rams, Bills, Giants) went 2-3 for the fifth straight week to fall to 36-34 on the season.

However, @Pigskin_Junkies — which went 2-2 (Browns, Packers, Bills, Patriots) to run its record to 51-18 — can reclaim first place Monday if the Seahawks cover.