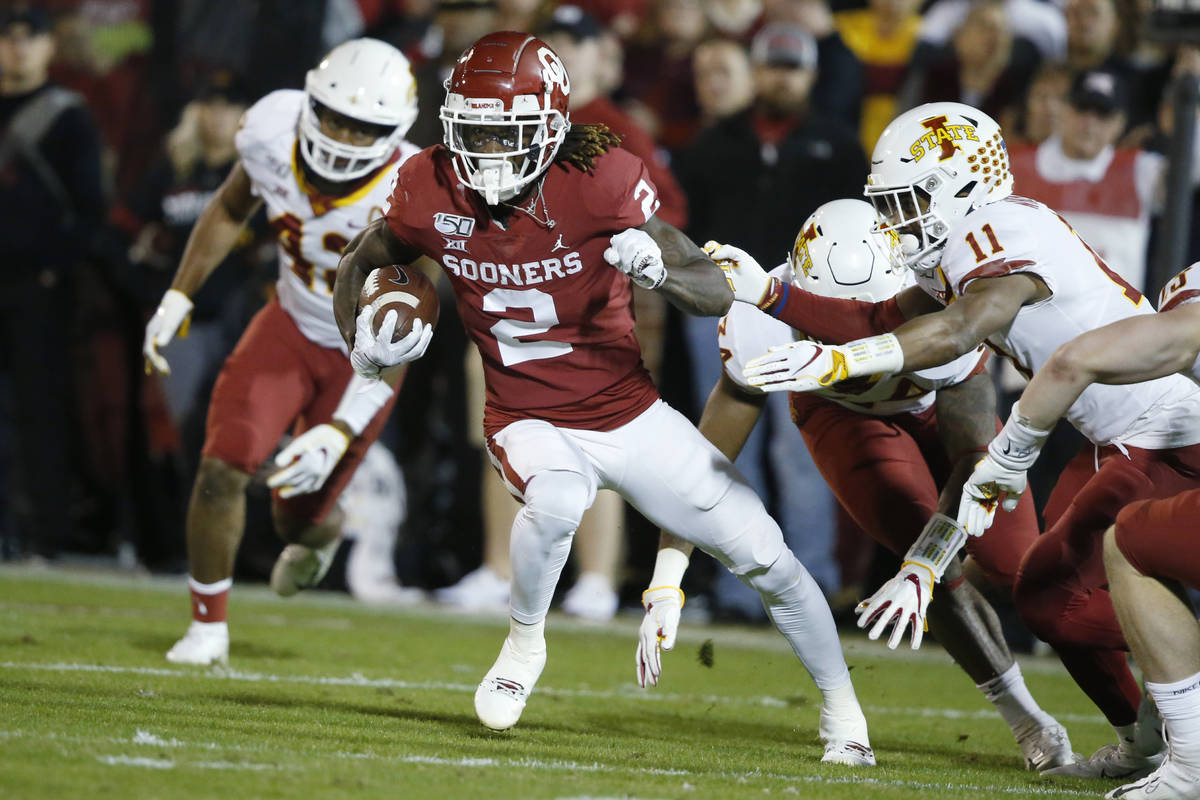 FILE - In this Nov. 9, 2019, file photo, Oklahoma wide receiver CeeDee Lamb (2) carries during the team's NCAA college football game against Iowa State in Norman, Okla. The Raiders have the 12th and 19th picks in the NFL draft thanks to the 2018 trade that sent star pass rusher Khalil Mack to the Chicago Bears. Several receivers are projected to go in the first round. Alabama's Jerry Jeudy and Henry Ruggs and Oklahoma's Lamb are considered by many analysts to be the best of the bunch. (AP Photo/Sue Ogrocki, File) 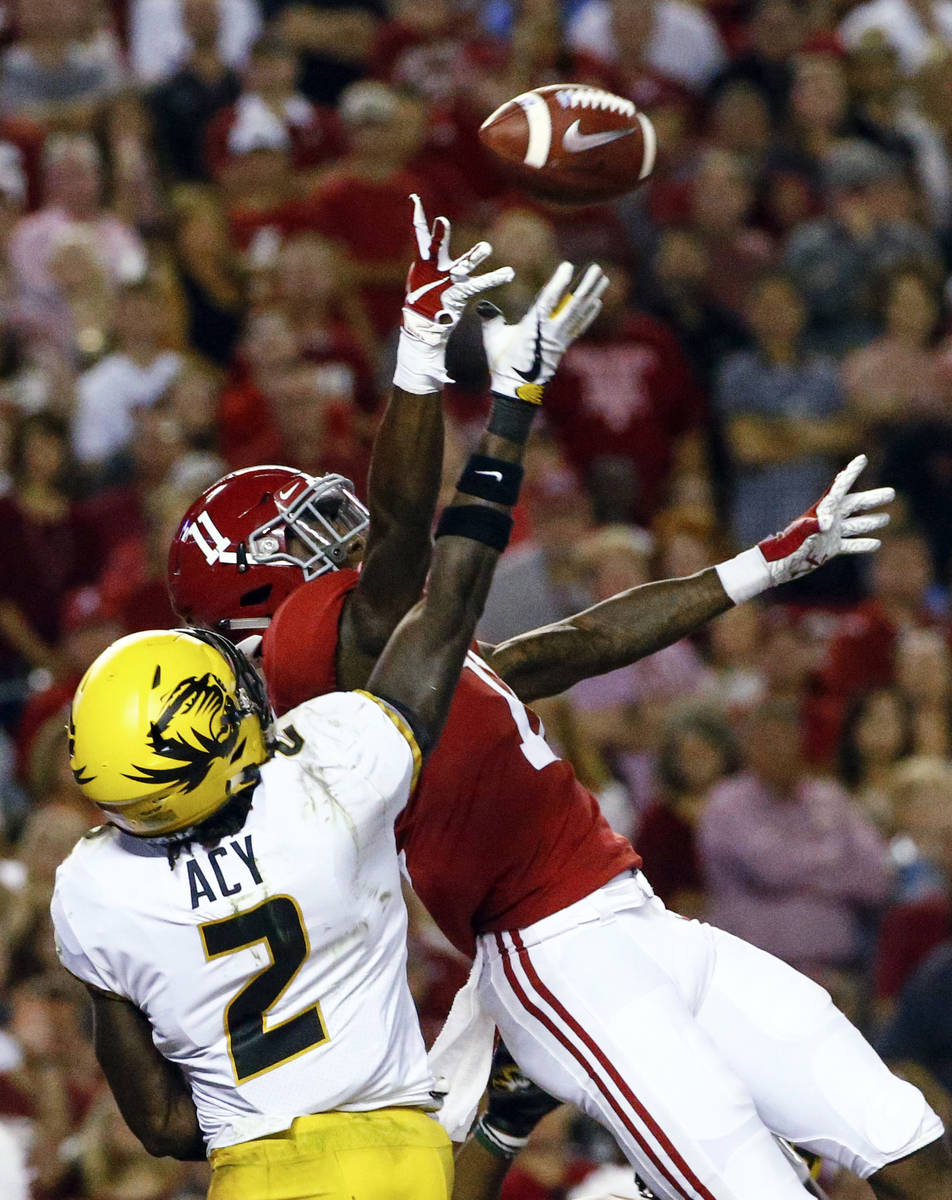 Missouri defensive back DeMarkus Acy (2) breaks up a pass intended for Alabama wide receiver Henry Ruggs III (11) in the end zone during the first half of an NCAA college football game Saturday, Oct. 13, 2018, in Tuscaloosa, Ala. (AP Photo/Butch Dill) 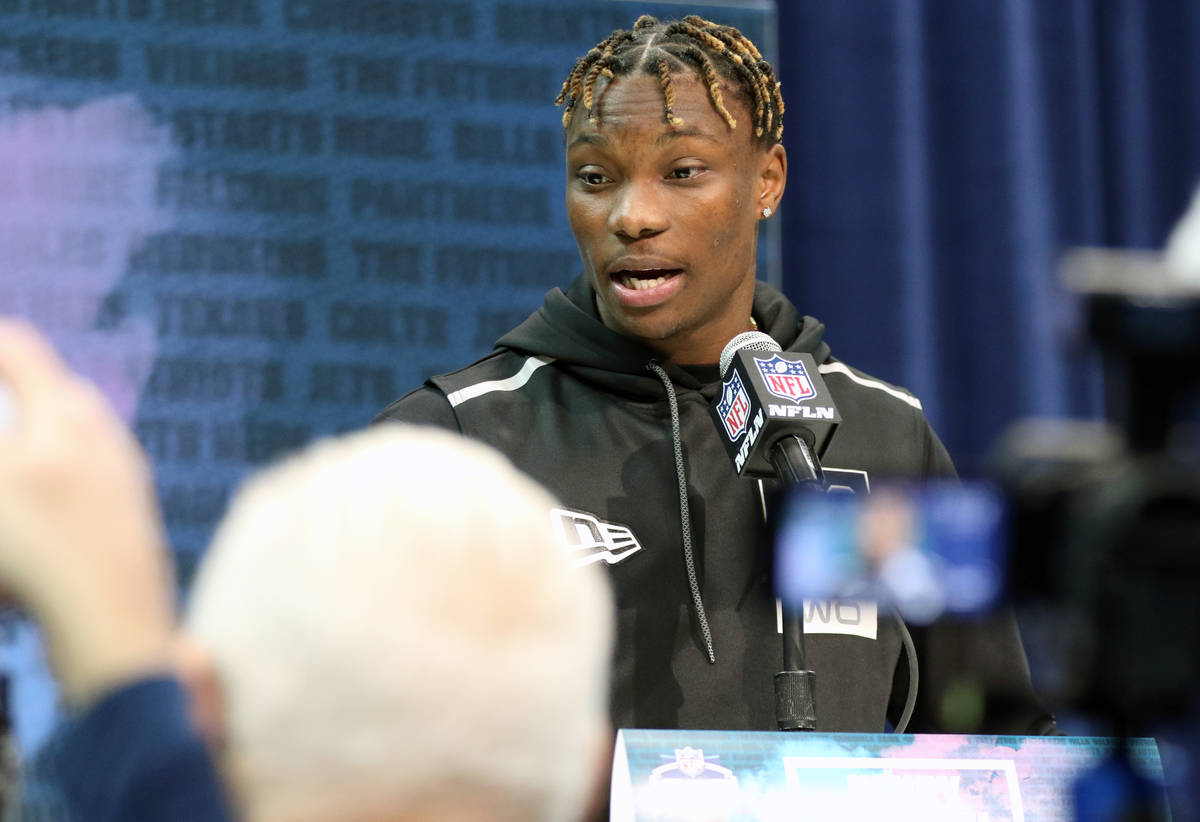 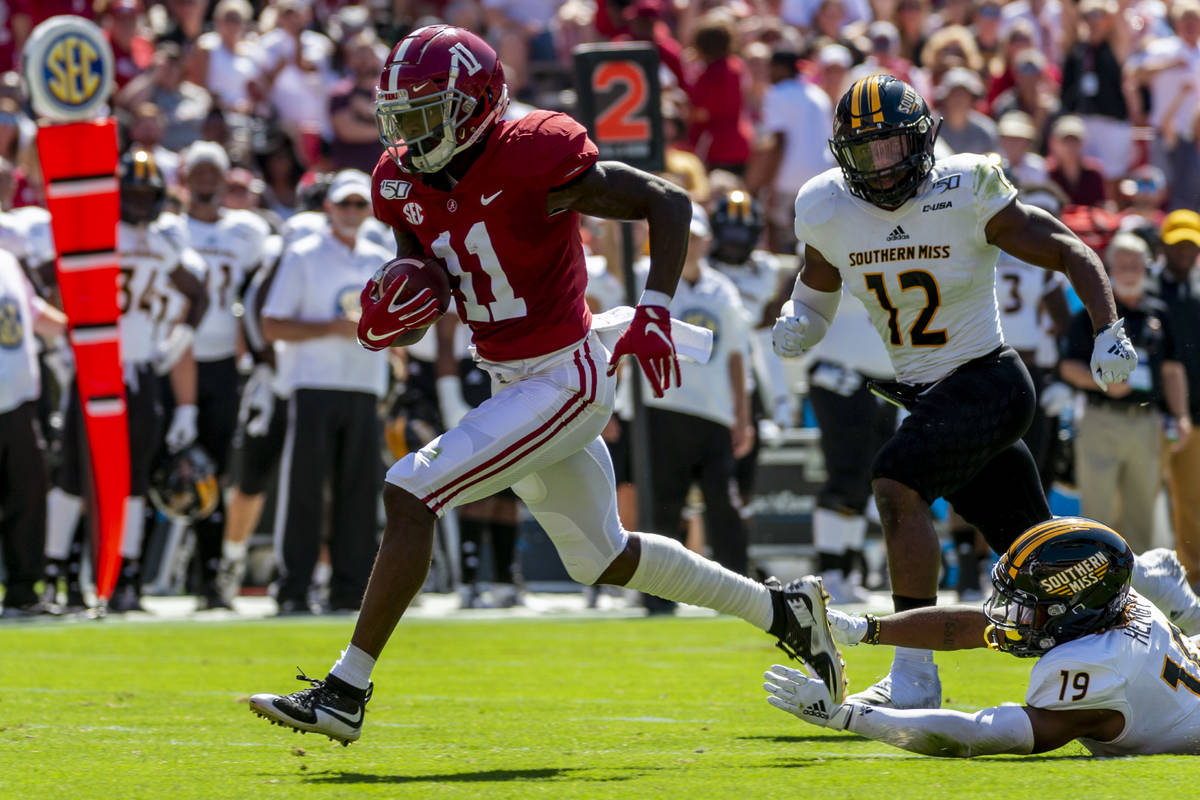 FILE - In this Sept. 21, 2019, file photo, Alabama wide receiver Henry Ruggs (11) runs in for a touchdown on a pass reception against Southern Mississippi during the first half of an NCAA college football game in Tuscaloosa, Ala. The Los Angeles Raiders selected Ruggs in the first round of the NFL draft. (AP Photo/Vasha Hunt, File) 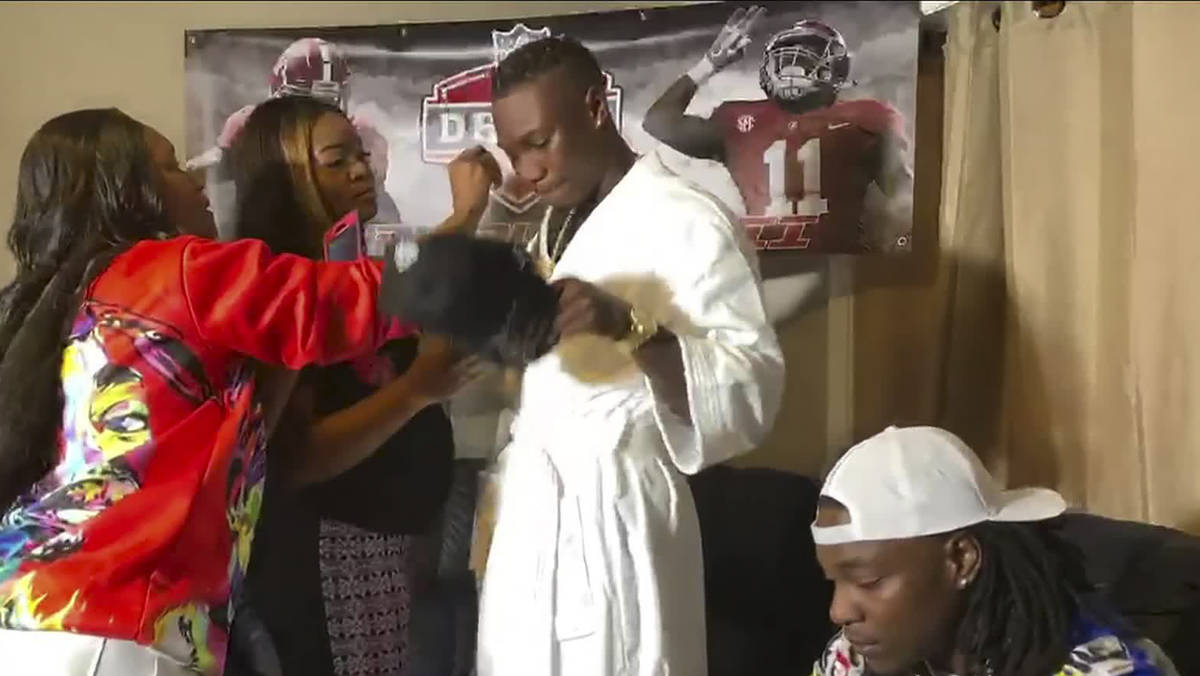 In this still image from video provided by the NFL, Henry Ruggs III, center, gets ready to put on a Las Vegas Raiders cap after being selected by the team in the first round of the NFL football draft Thursday, April 23, 2020. (NFL via AP)

In the Raiders’ inaugural NFL draft as Las Vegas’ franchise, they fittingly rolled the dice on a pair of long shots Thursday with their first two picks.

Alabama receiver Henry Ruggs, the Raiders’ first first-round pick at No. 12, was rated behind wideouts Jerry Jeudy and CeeDee Lamb at Las Vegas sportsbooks. And Ohio State cornerback Damon Arnette, their second selection at No. 19, was a heavy favorite (-550) to not be taken in the first round.

“It seems like the sharps are not impressed with the Raiders’ first two picks,” Circa Sports sportsbook manager Chris Bennett said. “If you respect the betting market and think players ought to go somewhere in the range of where the line closed on their draft position, it doesn’t look like very good picks by the Raiders.”

Circa reported a small win on the first round despite losing a big decision on Ruggs, who was a 6-1 long shot to be the Raiders’ first pick and +375 to be the first receiver drafted.

“The worst thing that happened was the Raiders drafting Henry Ruggs. We really wanted them to draft Jeudy or Lamb,” Bennett said. “If they’d have done that, we would’ve been doing shockingly well.

“Our expectations were low. We didn’t think we had much chance of winning money. It’s such a challenge with all the sharp people scouring for info and only making bets when there’s a good bet to be made.”

“We’re happy with a small loss with all the sharp money in there,” he said. “It’s the first year (MGM) has booked the draft, but talking to guys at the other books, it’s always a tough proposition booking it. The information gets out there, and you’ve got to stay ahead of it.”

Tua for the money

An MGM bettor outside of Nevada won a $14,000 wager (-104) that the Dolphins would draft Alabama quarterback Tua Tagovailoa.

When Miami lost its first four games last season by a combined score of 163-26, it appeared it was tanking for the right to take Tagovailoa with the No. 1 pick. The Dolphins settled for the No. 5 pick after finishing 5-11, but they still wound up getting the left-hander after his draft stock dropped behind Heisman Trophy winner Joe Burrow, who went No. 1 to the Bengals.

Over 3½ on Tagovailoa’s draft position soared to -420 at William Hill, and Circa bettors cashed over 3½ and under 5½ (-160) after Tagovailoa’s number shot up amid injury concerns.

“It was not ideal. We did get middled by the over-under,” Bennett said. “But it was palatable. I’m just glad we dodged a major landmine in the first round. It would’ve been pretty bad if Tua went with the No. 3 pick and especially by a team other than the Dolphins or Chargers.”

Circa won on a prop of whether two quarterbacks would be drafted back to back in the first round.

William Hill won on Ruggs and over 5½ wide receivers in the first round after a late flurry of money came in on the under.

“Wide receivers turned out to be good for us,” William Hill sportsbook director Nick Bogdanovich said. “We won on Lamb, Ruggs and Jeudy. Every receiver was good.

“Conferences were no good. You can name any conference you want, and it was a loser. Offensive linemen over (5½ and 6½) was probably the worst.”

“All in all, we cannot complain at all how the results came in,” Bennett said. “The only thing we have to sweat (Friday) is where Jalen Hurts gets drafted.”

Hurts’ draft position opened at 78½ and closed at 58½ on the former Oklahoma quarterback.