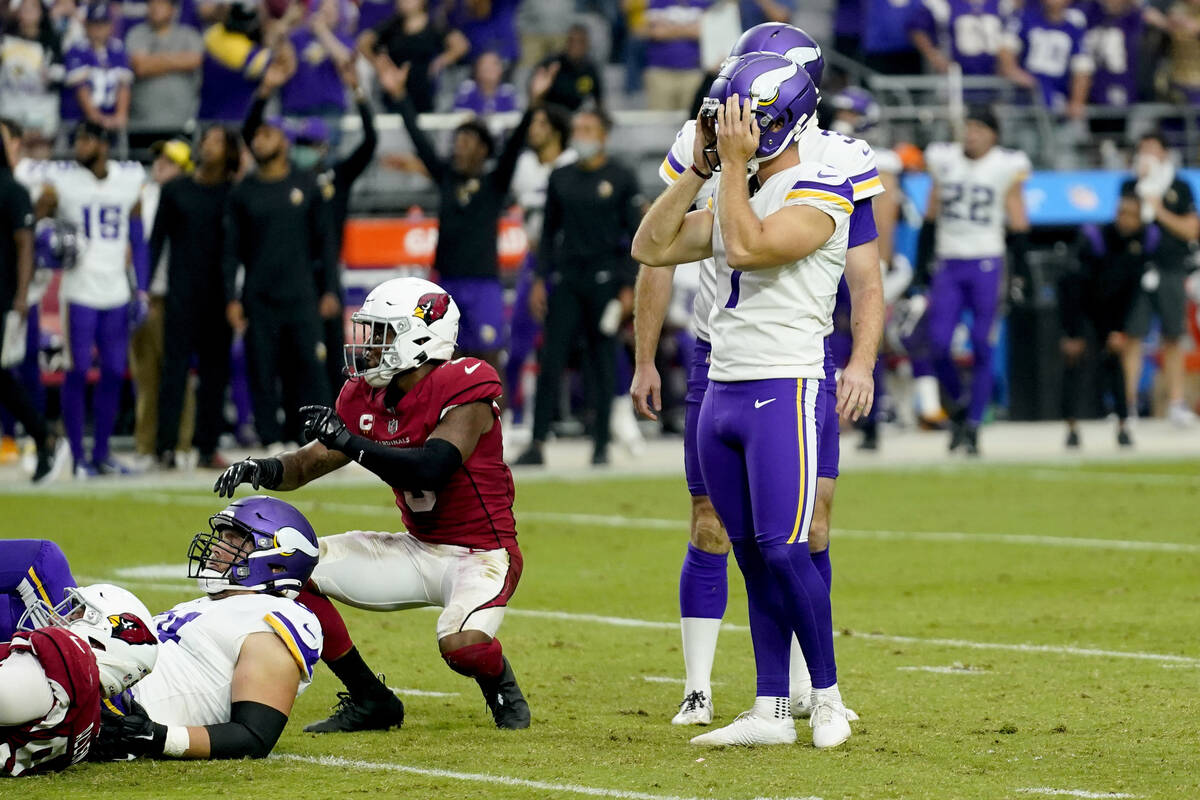 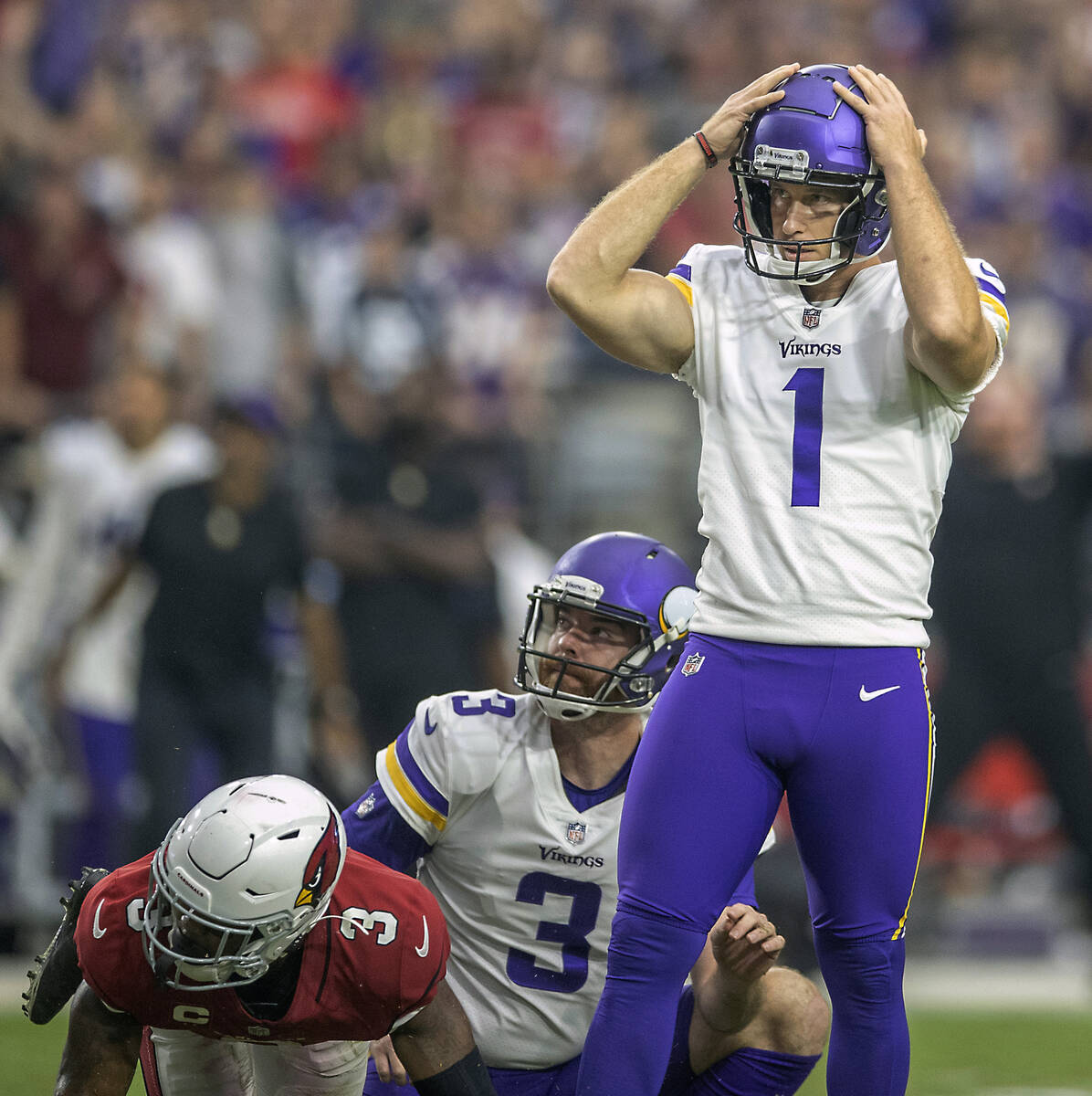 Minnesota Vikings kicker Greg Joseph (1) reacts after missing a field goal at the end of the fourth quarter of an NFL football game against the Arizona Cardinals, Sunday, Sept. 19, 2021, in Glendale, Ariz. (Elizabeth Flores/Star Tribune via AP) 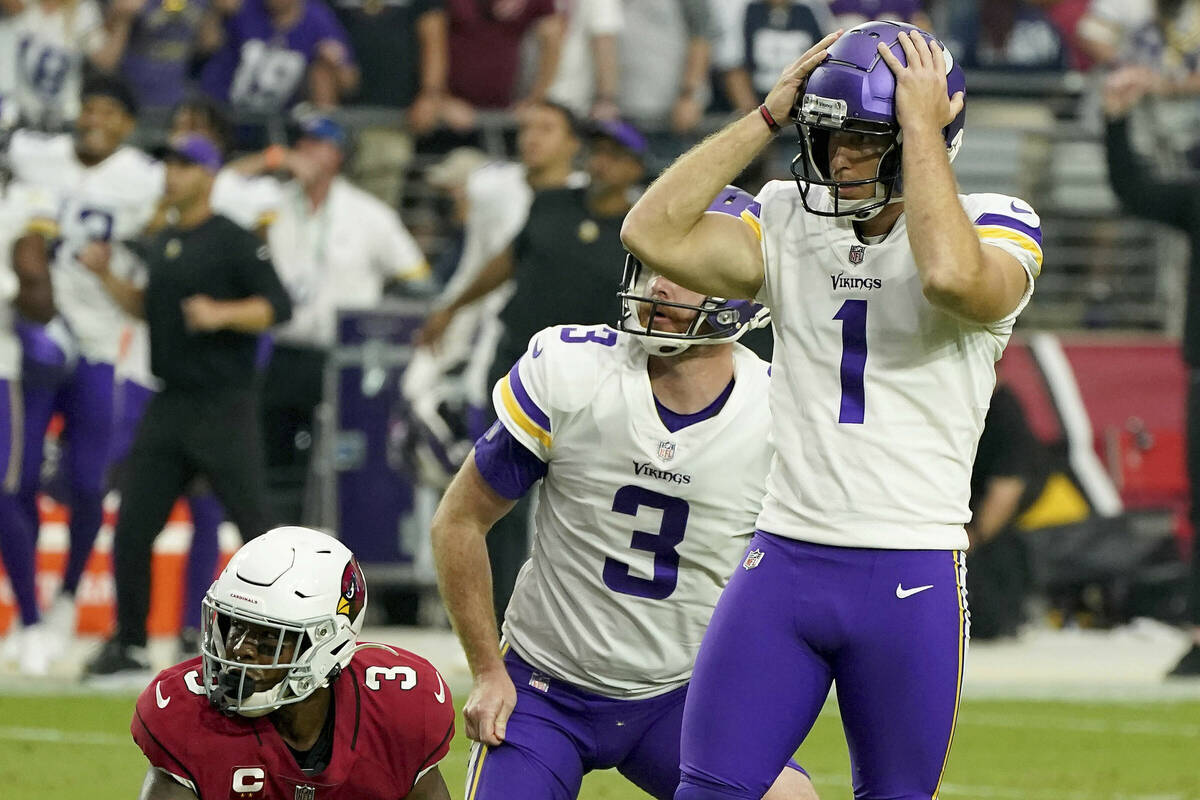 Is the West the best in the NFL?

After the first two weeks of the season, five of the seven remaining unbeatens reside in the AFC West and NFC West.

The victory — which followed Monday’s wild 33-27 overtime home win over the Ravens — was one of five outright upsets and nine covers by underdogs (9-6 ATS) that helped Las Vegas sportsbooks to another winning week.

“We had a good day,” MGM Resorts director of trading Jeff Stoneback said. “The Raiders were a solid win for us. We did have some late sharp money on the Raiders, but the public was on the Steelers, and that more than offset the sharp money.”

Derek Carr threw for 382 yards and two touchdowns, including a 61-yard bomb to Henry Ruggs in the fourth quarter that put the Raiders up 23-14.

“The Raiders might be better than we thought,” Red Rock Resort sportsbook director Chuck Esposito said. “Defensively, they played well. And with no Josh Jacobs and kind of a beat-up offensive line and linebackers, they went across the country and won. That was really impressive. That was a huge statement game.”

Station Casinos won on the day but lost on the Raiders, who received a lot of support on the money line as 2-1 underdogs.

“We might begin to see a larger local bias betting them, similar to the Knights,” Esposito said.

Jacksonville rookie quarterback Trevor Lawrence, the No. 1 pick in April’s draft, was 14-for-33 for 118 yards, a TD and two interceptions.

“The Jets and Jaguars could be showing their true colors after Week 2,” Westgate SuperBook vice president Jay Kornegay said. “It looks like they’re going to be struggling for a while until those quarterbacks start playing better.

“As a bookmaker, we’re quickly becoming Jets and Jaguars fans. I guarantee you we’ll be rooting for those two teams next week.”

Moments after Greg Zuerlein kicked a 56-yard field goal as time expired to give the Cowboys a 20-17 win and cover over the Chargers (-3), Vikings kicker Greg Joseph missed a potential game-winning 37-yard field goal with four seconds left that dropped Minnesota to 0-2.

“I think the Colts are one of the major disappointments and the Vikings as well now that they’re 0-2,” Esposito said.

Tampa Bay and Carolina are the other 2-0 teams. The Buccaneers exploded for 20 unanswered points in the fourth quarter to cover as 13-point favorites in a 48-25 win over Atlanta.

The Panthers exposed the Saints — coming off their 38-3 rout of the Packers — in a 26-7 triumph as 3-point home underdogs.

“Look how dominant the Saints were against the Packers, and that Panthers team just smothered them,” Esposito said. “They’re a touchdown favorite over Houston without Tyrod Taylor on Thursday night and could be 3-0.

“The Panthers, Raiders and Broncos are huge surprises.”

The Bills bounced back from their loss to the Steelers with a convincing 35-0 win over the Dolphins as 3½-point favorites and made the SuperBook a loser on the day.

“We’re down a couple grocery carts,” Kornegay said after the afternoon games.

But by the end of the night, all the books were big winners thanks to the Ravens’ 36-35 upset win over the Chiefs as 4-point underdogs.