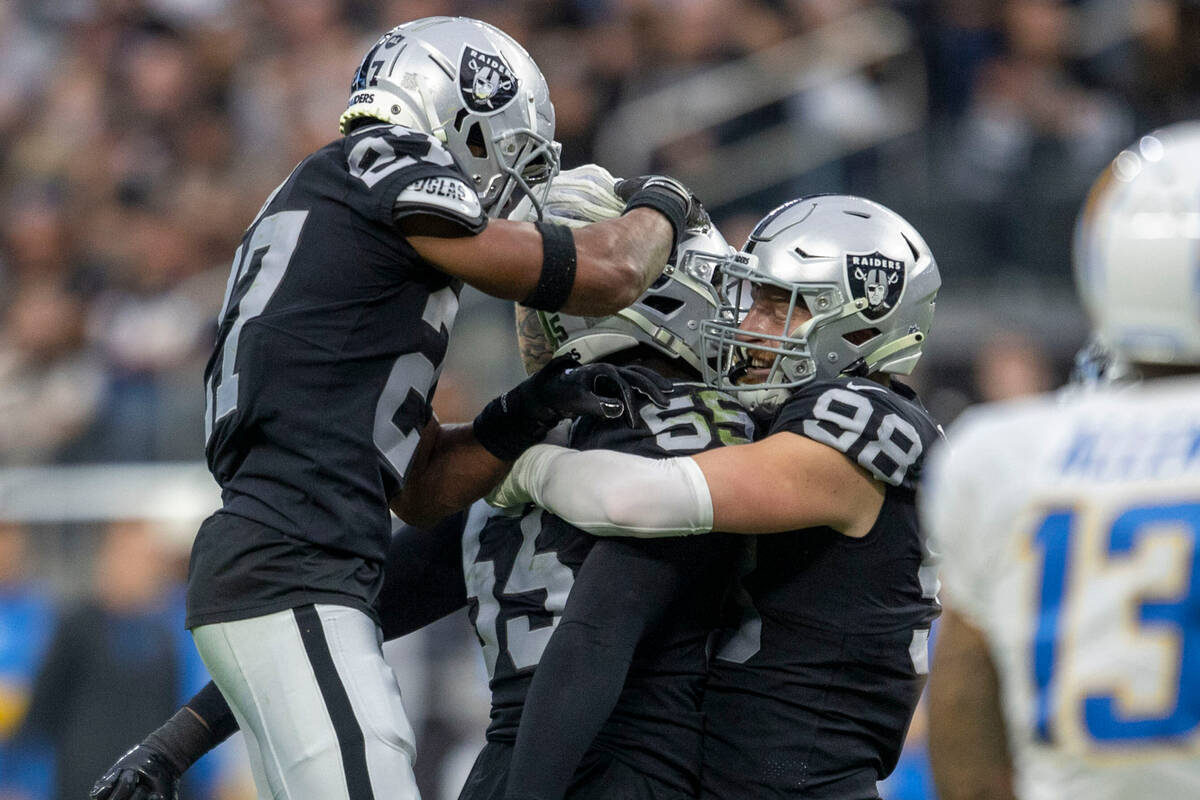 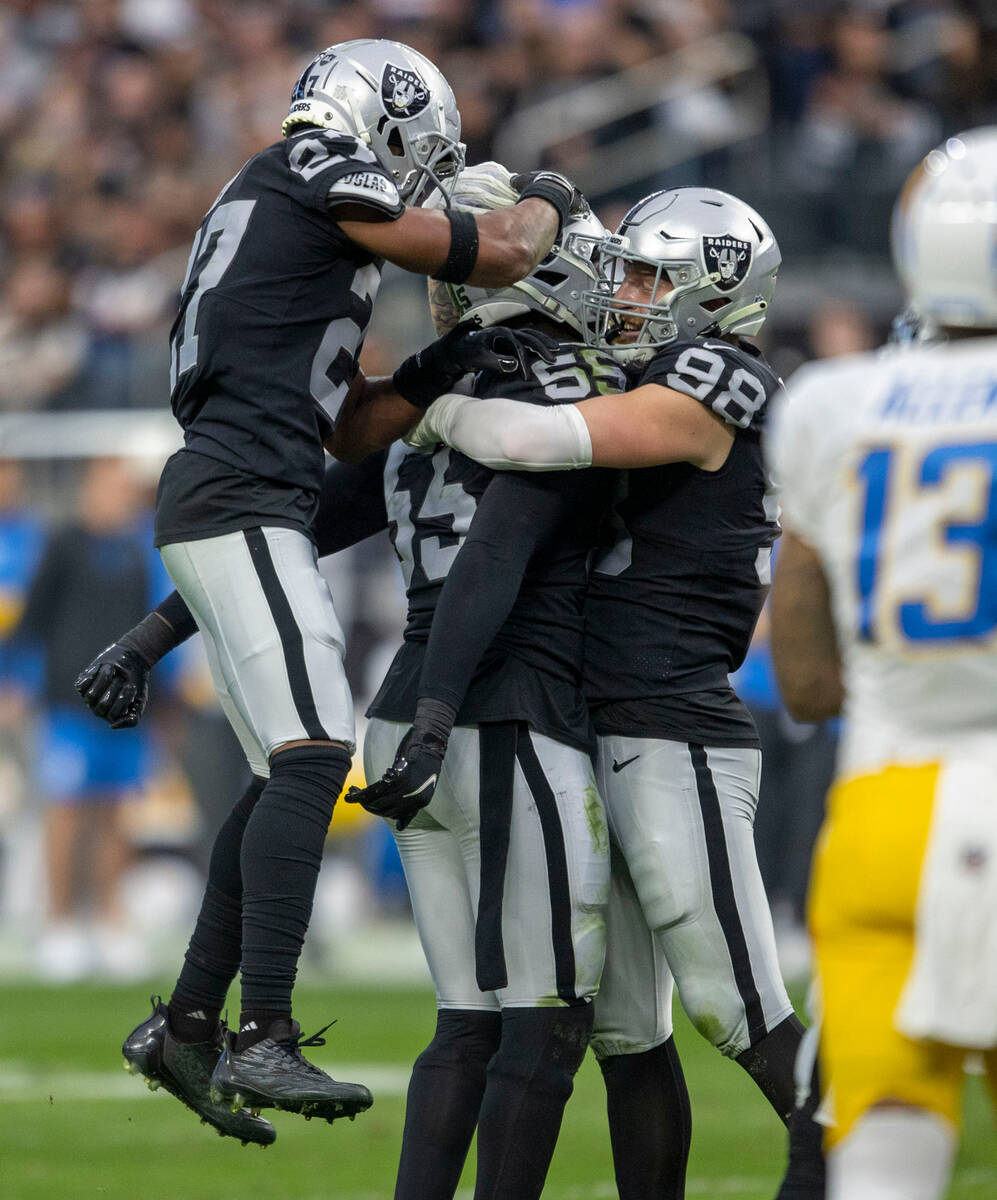 Just when I thought I was out, they pull me back in.

Raiders bettors can relate to that classic quote by Michael Corleone in “The Godfather Part III.” But in a good way.

After gamblers gave up on the Silver and Black following a loss to the lowly Colts that dropped them to 2-7 (3-6 ATS), the Raiders promptly reeled off back-to-back overtime wins and covers on the road.

Bettors jumped back on board this week and had their faith rewarded, as the Raiders won and covered their third straight in a 27-20 comeback victory over the Chargers as 2½-point favorites at Allegiant Stadium.

“One of our worst games of the day was the Raiders beating the Chargers,” Red Rock Resort sportsbook director Chuck Esposito said. “It was the first time in three weeks that bettors went back and backed the Raiders. The last two weeks were good for the house. But this week was clearly good for the bettors, as they got paid.”

Three weeks after the Raiders appeared destined for a high draft pick, they suddenly have playoff hopes. The Raiders (5-7) trail the New York Jets (7-5) by two games for the final AFC playoff spot with five to play.

“The Raiders seem to have hit their stride,” Caesars Sportsbook assistant director of trading Adam Pullen said. “If they keep playing like they are, they might be back in the playoff mix.

“You look at their schedule and they’re at the Rams, who are a mess right now. Then they’re home against the Patriots, at the Steelers, home against the Niners without Jimmy Garoppolo and their last game is against the Chiefs. Who knows if the Chiefs will even need that game.”

The Raiders are 5½-point road favorites over the Rams on “Thursday Night Football,” while the Jets are 9½-point underdogs at Buffalo.

Favorites went 9-4 ATS on their best Sunday of the season. But bettors still lost, largely because they backed a pair of popular underdogs in the Jets (+3), who lost 27-22 to the Vikings, and Titans (+4½), who were whipped 35-10 by the Eagles.

Philadelphia ran its league-leading record to 11-1 while Minnesota improved to 10-2.

“Normally we would be rooting against those top five teams in the NFL,” Westgate SuperBook vice president Jay Kornegay said. “You look at those matchups and you’d think we’d probably need the Titans and Jets. But it didn’t pan out that way. There were some big plays on those two underdogs.”

Minnesota made a goal-line stand with 1:46 left, and New York quarterback Mike White threw an interception on fourth down from the Vikings’ 19 with 16 seconds to go.

Bettors also lost big on the Chiefs (-2½), who were defeated 27-24 by the Bengals in a rematch of last season’s AFC title game.

Kansas City led 24-20 early in the fourth quarter when Cincinnati recovered a fumble by Travis Kelce, then took the lead on a Joe Burrow touchdown pass. Harrison Butker missed a 55-yard field goal try that would’ve tied it with 3:24 left.

The 49ers (-5½) won their fifth straight and covered in a 33-17 win over the Dolphins. But they lost quarterback Jimmy Garoppolo, who’s out for the season with a broken foot.

Brock Purdy threw two TD passes after replacing Garoppolo. The rookie was dubbed “Mr. Irrelevant” as the last pick of this year’s NFL draft, but he’ll be anything but as the Niners try to make a Super Bowl run.

“Jimmy G out for the year changes the entire complexion of the NFC,” Esposito said. “A lot of people were leaning to the 49ers as the best team in the NFC. But that changes dramatically now and shifts back to the Eagles and Cowboys.

“I don’t know if Brock Purdy can get them to Glendale (Arizona, site of the Super Bowl). It’s a huge loss to the 49ers. They really have all the other pieces.”