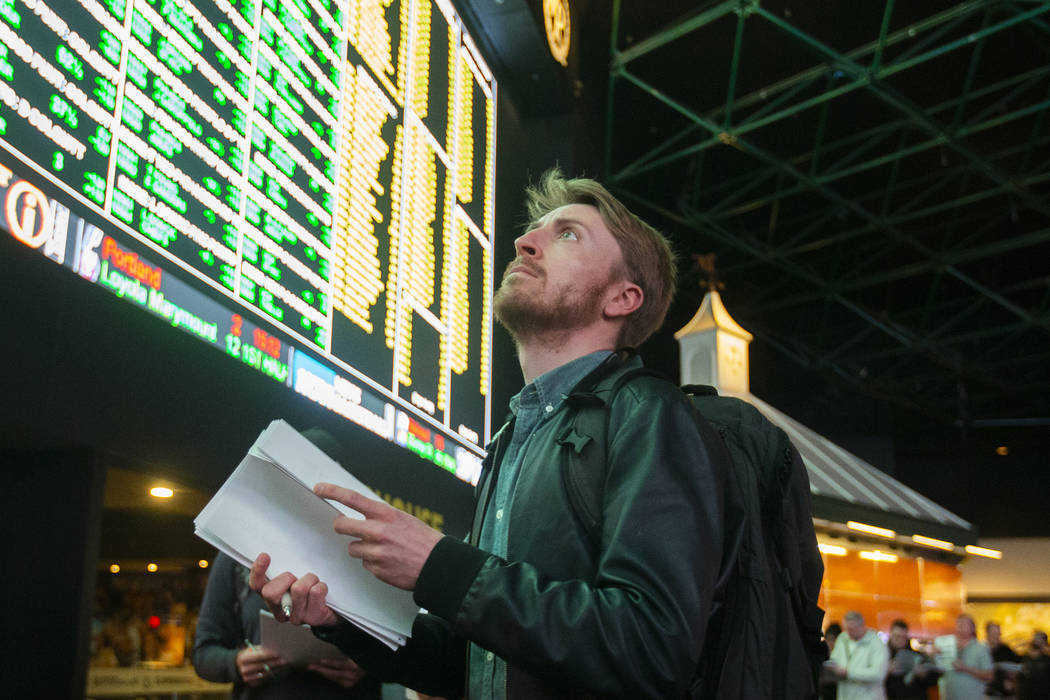 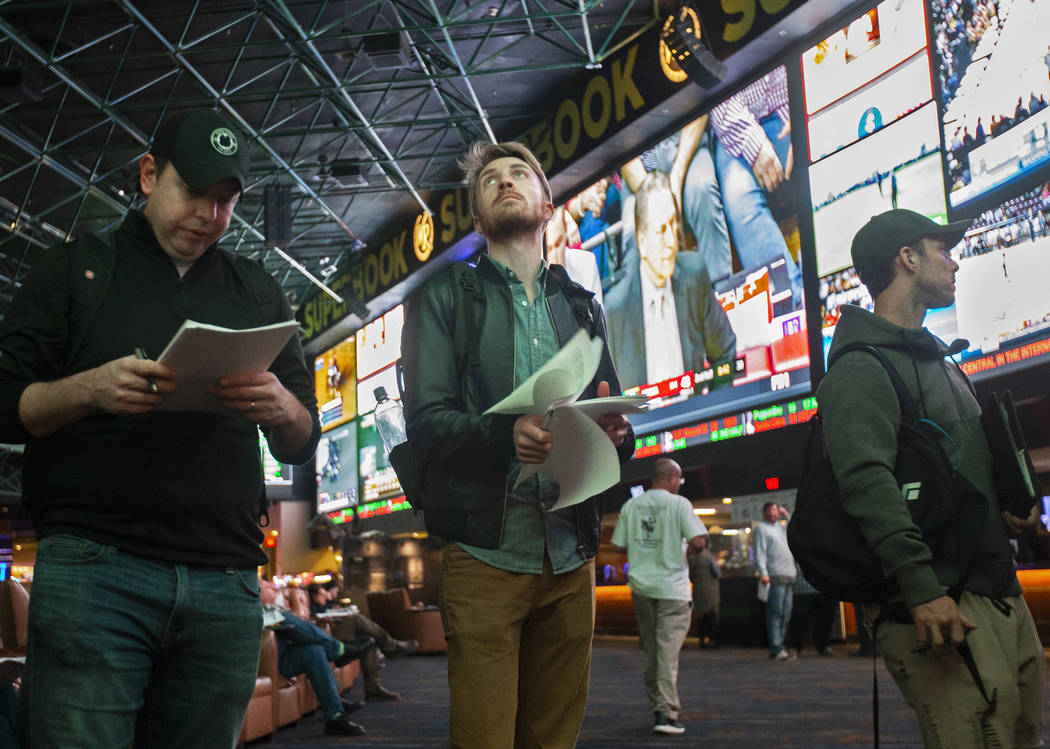 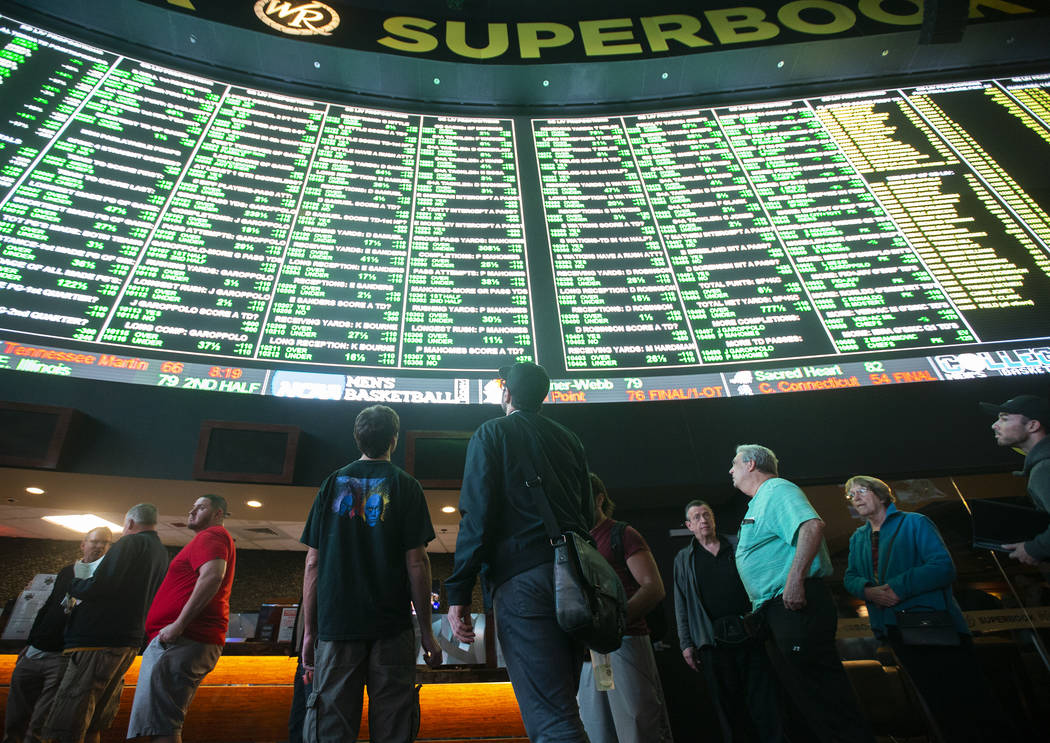 Peabody said he spent about 40 hours compiling his own homemade packet of Super Bowl props for the Feb. 2 game between the Kansas City Chiefs and San Francisco 49ers.

He then compared his numbers to the hundreds of props that lit up the video wall at the Westgate sportsbook Thursday night and bet on the biggest differences.

“Part of it is dusting off this old code I’d written,” said Peabody, a Yale graduate with a degree in economics who splits time between Boston and Las Vegas. “Basically, I have a number ready for everything that they’re going to throw at me.

“When the openers come up, I’m hoping there is a book that hangs a number that really doesn’t make a ton of sense. I’ll bet that, because if I don’t bet it, somebody else will.”

Peabody, 34, and other bettors waited in line at the Westgate to place up to two wagers at a time at a limit of $2,000 each. Most of them, including Peabody, then would go to the back of the line and wait their turn again.

It’s the 12th consecutive year that Peabody has bet the Super Bowl prop openers at the Westgate.

“I’m there until they close, generally,” he said. “At the end, there’s just a few of us left. It’s me and a few other people I see every year.”

Many sharp bettors engage in arbitrage betting — or wagering on differences between books to guarantee a profit.

“There are a lot of arbers (at the Westgate),” Peabody said. “They’ll have their Caesars app open or CG (Technology) app or William Hill and try to find discrepancies.”

But Peabody prefers to bet on numbers that differ from his own.

Some would call that genuine gambling.

“I like to think of it as investing,” he said with a chuckle. “I’m not going in with the intention of betting middles.

Peabody made computer projections on every player, but said some things can’t be predicted by an algorithm.

“Prop betting is a way to test your opinion,” he said. “A lot of these props correlate to the way the game ends up being played.

“If you have a theory about how the game’s going to play out, there are opportunities to take some shots based off of that.”

For example, pro sports bettor Jeff Whitelaw likes the 49ers to cover and the game to go under the total and is betting props based on that premise.

He likes San Francisco running back Raheem Mostert to go over his rushing attempts (16) and over his rushing yards, which offered an attractive middle for bettors at 68½ at William Hill and 77½ at the Westgate.

“I just think the 49ers are going to be able to run the ball pretty well against the Chiefs. I don’t think Kansas City will be able to stop them and the Niners will be able to control the ball,” said Whitelaw, 51. “That’s the way I’m looking at it, and I’ll play a lot of the props in that direction.”

In general, the pros play No and Under on props and the betting public plays Yes and Over, which is why Whitelaw and Peabody plan to wait to bet certain popular props.

“I’m not going to bet any Patrick Mahomes unders this week,” Peabody said. “There are some props I might have some good projections on, but I’m going to hold off entirely because I think the prices are going to get better next weekend.”

The prop numbers for the Chiefs quarterback at the Westgate are 25½ completions, 37½ attempts and 308½ passing yards.