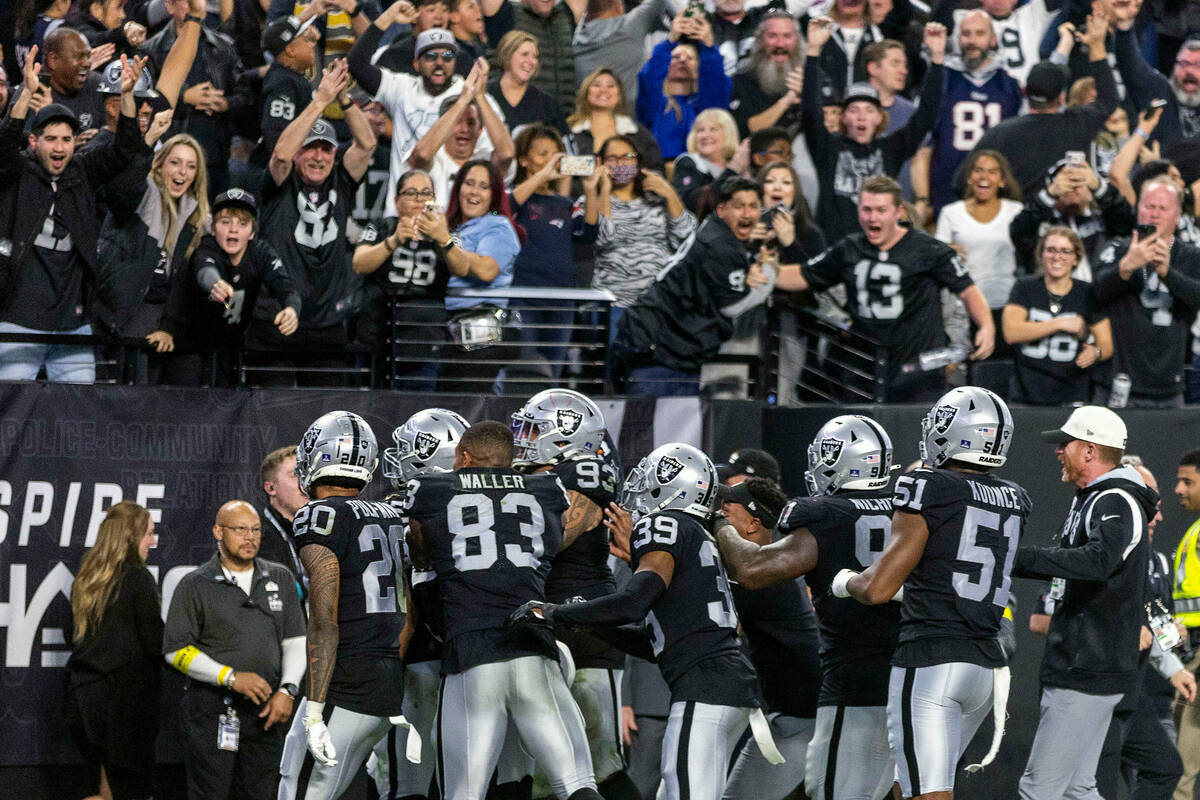 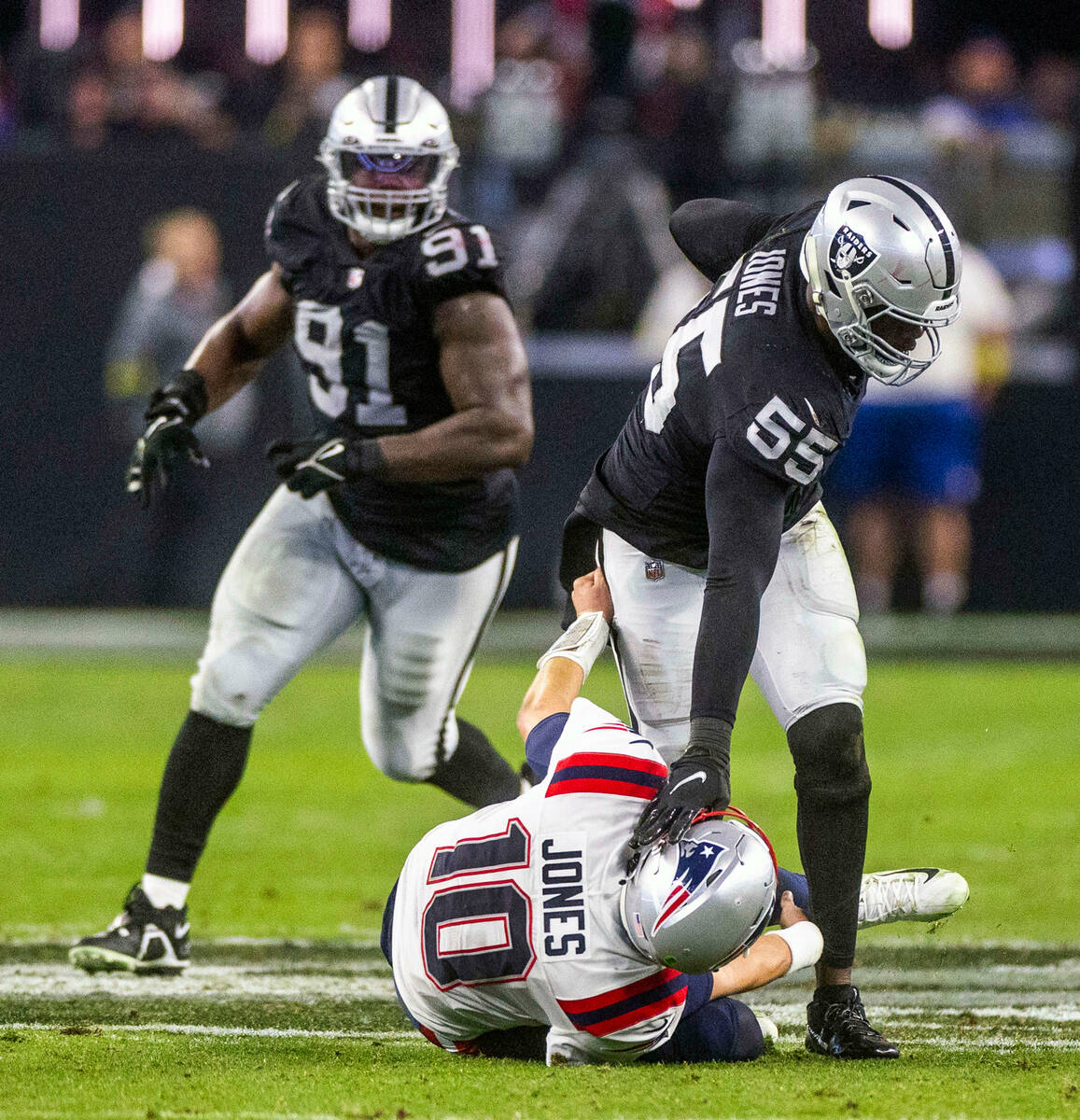 Raiders defensive end Chandler Jones (55) drives New England Patriots quarterback Mac Jones (10) onto the turf on a tackle attempt on the way to a winning touchdown interception and run during the second half of their NFL game at Allegiant Stadium on Sunday, Dec. 18, 2022, in Las Vegas. (L.E. Baskow/Las Vegas Review-Journal) @Left_Eye_Images

For every bad beat, there’s a miracle cover, and that’s what Raiders bettors got Sunday in one of the most bizarre endings to a game in NFL history.

Chandler Jones grabbed an unnecessary lateral by New England’s Jakobi Meyers out of the air on the final play and returned it 48 yards for a touchdown to give the Raiders a shocking 30-24 win and cover over the Patriots as 2½-point favorites.

The game appeared headed for overtime with 10 seconds left. But instead of attempting a Hail Mary from midfield or taking a knee to run out the clock, New England handed the ball to Rhamondre Stevenson.

After running to the Raiders’ 32, he pitched the ball to Meyers, who then inexplicably threw it across the field to Jones, the former Patriot who stiff-armed New England quarterback Mac Jones on his way to the end zone.

The play bailed out bettors who backed the Silver and Black and crushed Las Vegas sportsbooks, who were on the wrong end of a seven-figure swing.

“It killed us. It was terrible. We needed the Patriots pretty big,” South Point sportsbook director Chris Andrews said. “I really believe that’s the dumbest play I’ve ever seen.”

The play dealt a seven-figure loss to Caesars Sportsbook, and the game was the biggest loss of the day at Station Casinos and BetMGM, where a bettor won $300,000 on a straight bet on the Raiders -1.

“That was a crazy play. That made no sense,” Westgate SuperBook vice president Jay Kornegay said. “The only thing crazier is that it didn’t happen to the Raiders.”

The Raiders appeared en route to blowing their fifth double-digit halftime lead of the season when the Patriots went ahead 24-17 with 3:43 left after trailing 17-3 at the half. But the Raiders tied it on Derek Carr’s 30-yard TD pass to Keelan Cole with 32 seconds left that was upheld after a review.

Several other teams squandered big leads in a wild weekend that saw the Vikings storm back from a 33-0 halftime deficit Saturday to beat the Colts 39-36 in overtime in the biggest comeback in NFL history.

“When teams get up big, the public will be on the dog at pretty tasty prices,” Caesars vice president of trading Craig Mucklow said. “Matt Ryan has the biggest comeback in Super Bowl history against him, and obviously he wanted the regular-season one as well.”

Bettors at Station Casinos and the Westgate also cashed in on live wagering on Minnesota.

“The Colts game was a horrible outcome for us,” Red Rock Resort sportsbook director Chuck Esposito said. “Everybody was on the Vikings on the in-play in the second half, and they were getting a plus-price all the way.

“That was probably one of the worst in-play results of the year.”

Bettors dealt Caesars its worst loss Sunday on the Bengals (-3½), who trailed the Buccaneers 17-0 in the first half before exploding for 34 consecutive points in a 34-23 win. Tampa Bay started the second half with five straight turnovers.

Underdogs went 6-0 against the spread in the morning games, and favorites went 3-0-1 ATS in the afternoon.

“In the afternoon, we were clearly Patriots and Bucs fans, and we lost them both,” Esposito said.

“’It’s never over till it’s over’ has never applied more than this week,” Caesars assistant director of trading Adam Pullen said.

“Sometimes you have people who like to bet a lot to win a little on a team that’s ahead, and you have people on the opposite end of the spectrum who take fliers,” Pullen said. “But when you lose one of those bets, it takes a while to recoup.”