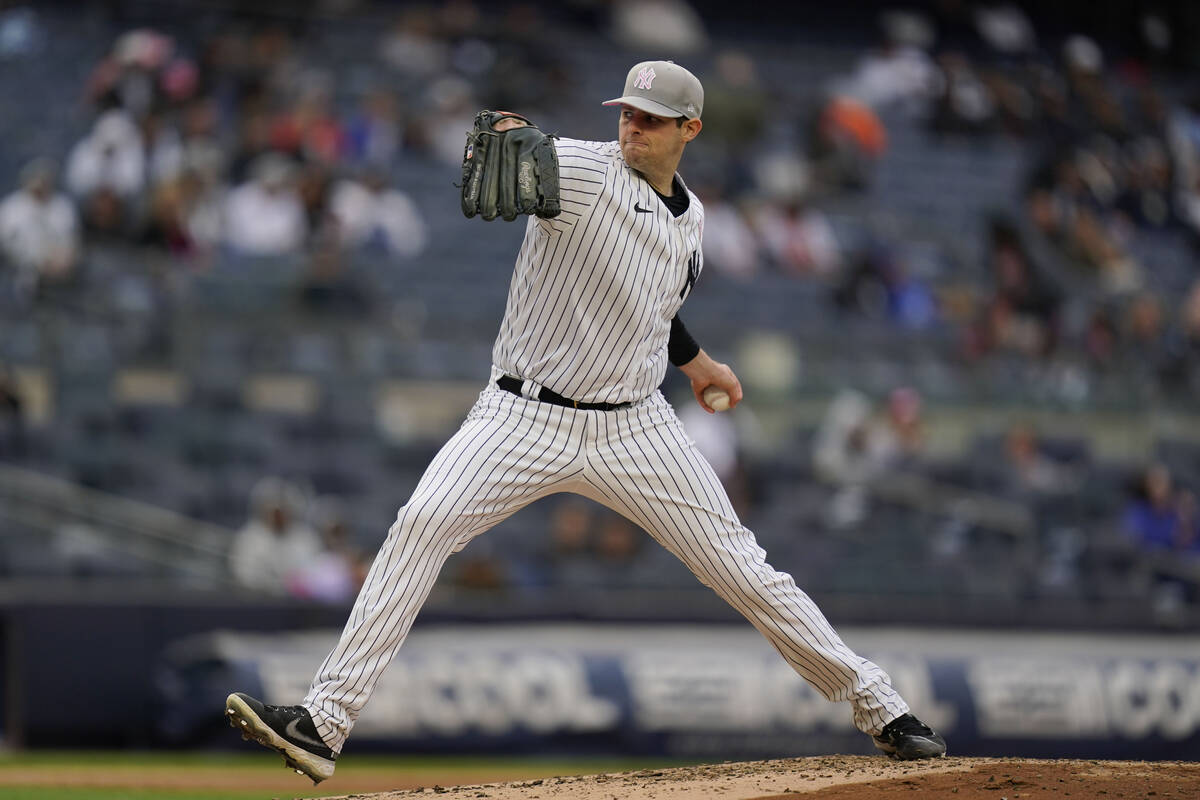 New York Yankees starting pitcher Jordan Montgomery during the third inning of the second game of a baseball doubleheader against the Texas Rangers at Yankee Stadium, Sunday, May 8, 2022, in New York. (AP Photo/Seth Wenig)

Five weeks into baseball season, the offense has been underwhelming, to say the least.

Unders cashed at a 60-percent clip until late April. That number had dropped to 55 percent entering Thursday as books have slashed their totals.

While totals of 9 and 10 were on the board at the start of the season, the highest total this week has been 8½. The last time a total closed 10 or higher in a game not played at Colorado’s hitter-friendly Coors Field was on April 26 at Arizona for a Diamondbacks game against the Los Angeles Dodgers. It went under.

“They’ve taken the juice out of the ball,” Circa Sports baseball oddsmaker Chris Bennett said. “It took a week or two for the market to really figure out that something was different about the baseball and that it just hasn’t been carrying like it had been the last couple of years.

“Now games that a year ago would’ve been eight are seven. It’s pretty uniform across the league. What a total would have been a year ago is a full run higher than what it is now.”

Overs went 19-9-1 on Tuesday and Wednesday. But Westgate SuperBook baseball oddsmaker Randy Blum is comfortable with the adjustments made to the totals.

“I don’t think there’s been an overadjustment because we haven’t seen sharp guys come in and bet overs with us,” he said. “You’ll still see those double digits in Colorado but the numbers are way down for the majority of games.

“Baseball is smart enough to know this is probably not good. I don’t think it’s going to last the whole season. Whatever their objective was, it’s pretty obvious now it didn’t work the way they hoped.”

Bennett isn’t so sure. He expects MLB to stay with the same ball all year as it tries to reverse the recent trend of most plate appearances ending with a home run, strikeout or walk.

“By deadening the ball, teams are going to have to put the ball in play to score runs,” he said. “I think for at least the remainder of this season, they would not do anything different with the baseball. The warmer weather is going to help offense.

“As dramatic as the changes have been, the totals aren’t five. I don’t think it’s outrageous how big the change has been. But it’s certainly been significant.”

The Yankees have gone under in all six of Jordan Montgomery’s starts and the Milwaukee Brewers have a 4-0-2 under mark when Corbin Burnes starts. Nine pitchers have a 5-1 under record, including Houston’s Justin Verlander and the Dodgers’ Julio Urias.

Bettors who have backed both LA teams and both New York teams on a daily basis this season are up big.