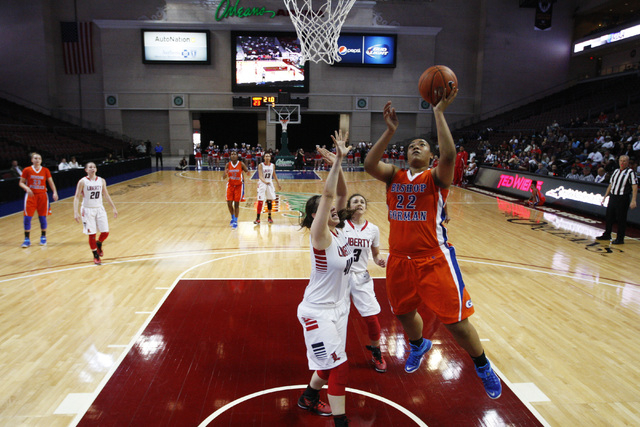 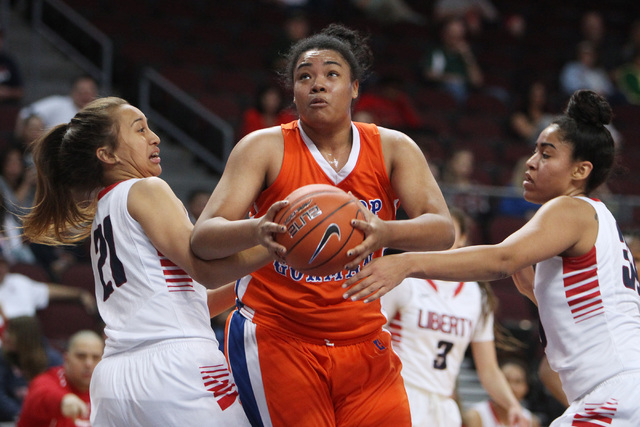 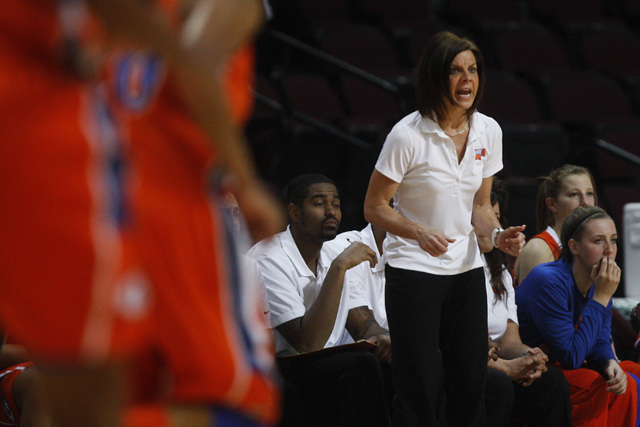 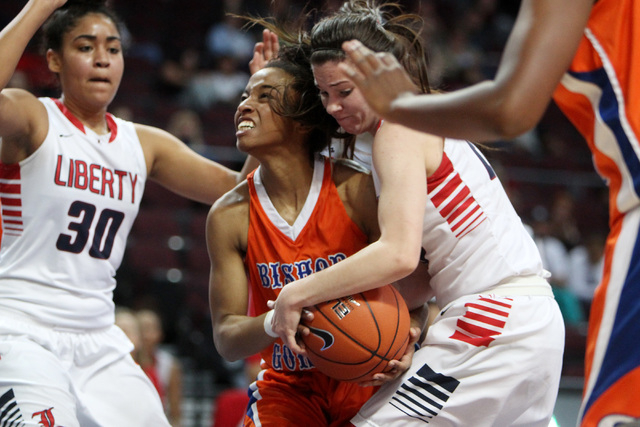 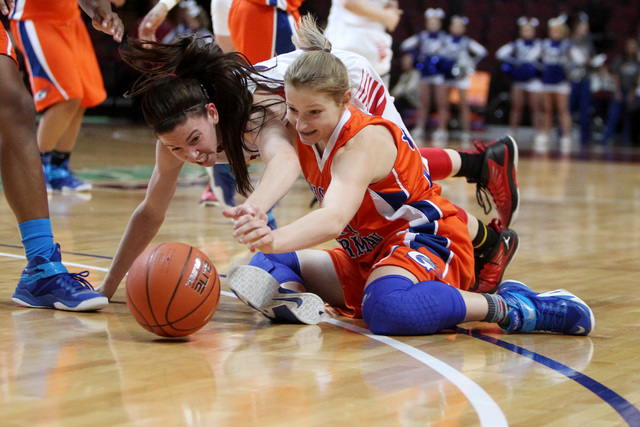 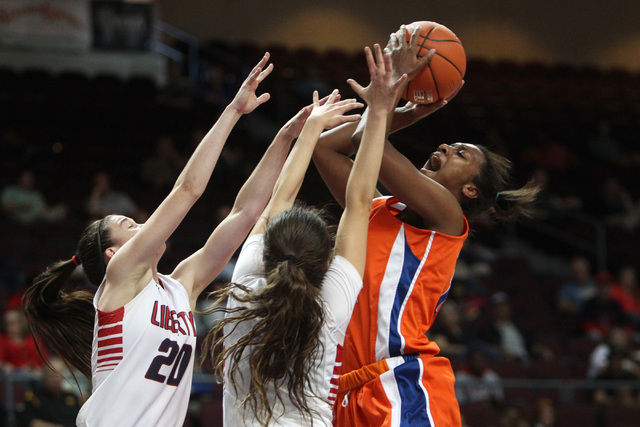 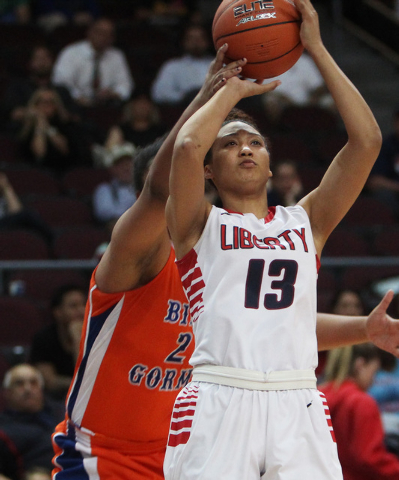 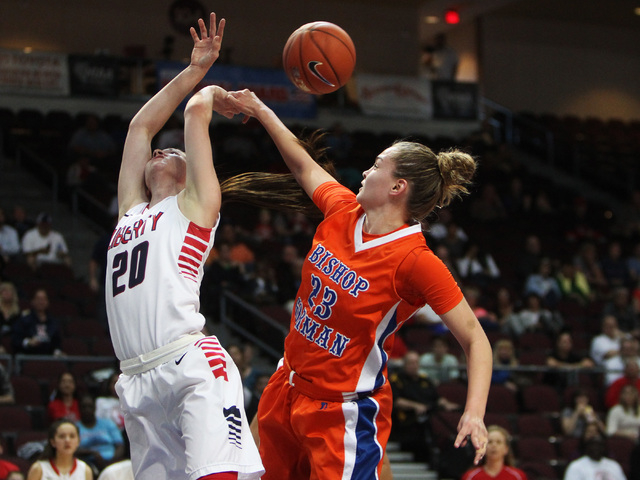 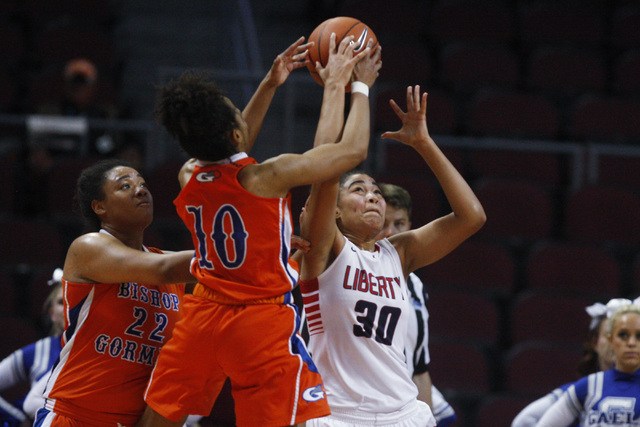 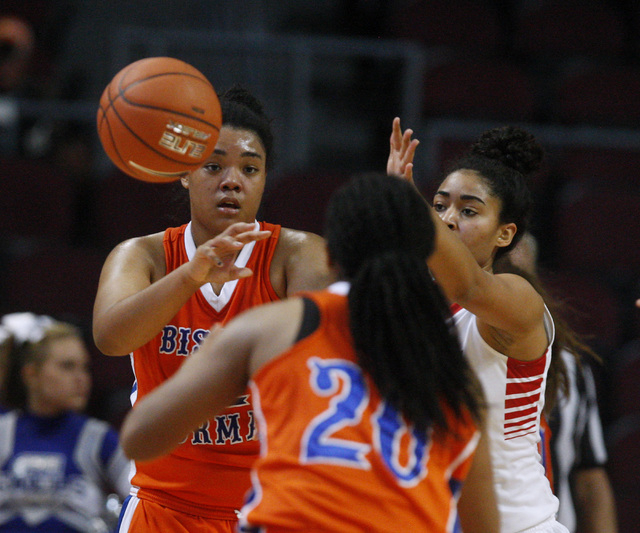 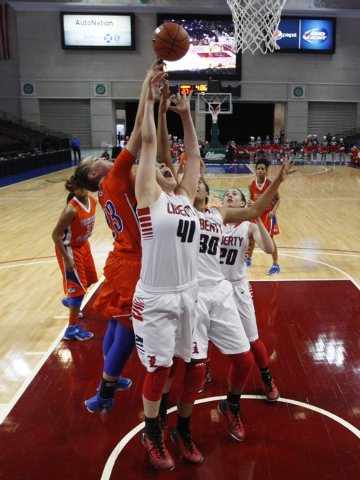 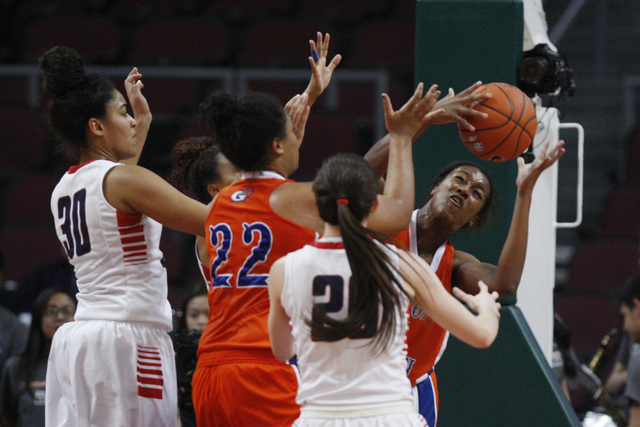 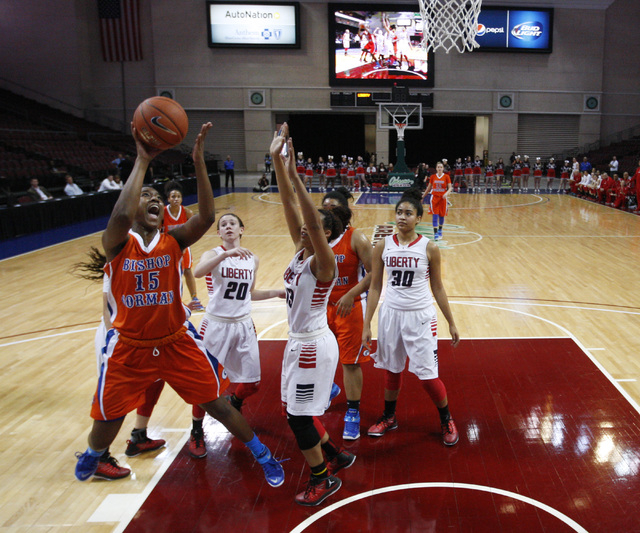 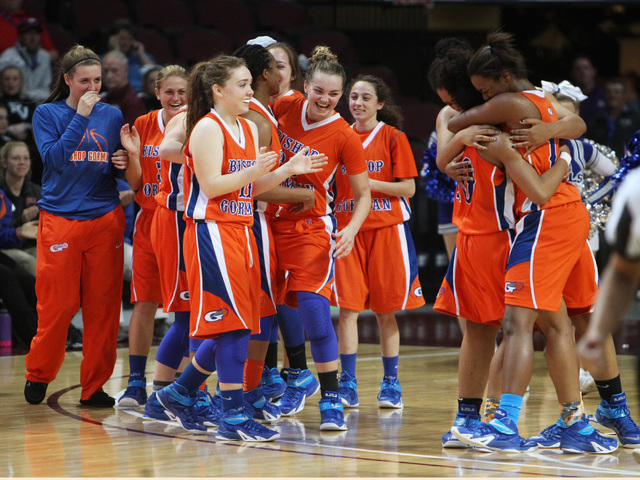 Stanley, a 6-foot-2-inch junior post, poured in 22 points, including a go-ahead three-point play with 1:21 remaining, and the Gaels played tremendous defense en route to a 39-35 win over Liberty in a Division I state semifinal at Orleans Arena.

“Never. Not even close,” Krmpotich said. “But we settled down and got some composure. Our posts played really well, and we always want to get our posts going. It’s hard to defend when you have two bigs playing well.”

The Gaels led by as many as seven points in the third quarter before the Patriots rallied and took a 32-31 lead on three free throws by Kaily Kaimikaua with 3:09 to play.

After the teams traded baskets, Madison Washington fed Stanley in the low post. Caught out of rotation on defense, Kaimikaua fouled Stanley, who made the basket and the free throw to give the Gaels the lead for good.

Said Liberty coach Chad Kapanui: “She was the X factor in the game. She had a great game.”

Liberty (25-4) struggled all game to shoot in an arena atmosphere as opposed to a normal high school gym.

In the final 1:10, the Patriots missed two shots, including a 3-pointer, and went 1 of 4 from the free-throw line before throwing a wild pass out of bounds with eight seconds left, effectively ending the game.

“Gorman played a great defense against us,” Kapanui said. “They played really hard. It just seemed like the ball didn’t fall on our side.”

During one stretch of the first, second and third quarters, the Patriots made just 1 of 18 shots from the field.

“Our defense was key. We tried to disrupt what they do well,” Krmpotich said. “We were ready for them.”

Washington added eight points and 10 rebounds for the Gaels.

Centennial 78, Bishop Manogue 49 — Centennial’s Karina Brandon grabbed 10 offensive rebounds in the first half of the state semifinal. Her teammates made sure the team’s only senior didn’t have to work quite as hard in the second half.

Brandon finished with 12 points and 13 rebounds, and the Bulldogs overcame shaky shooting early to pull away from Bishop Manogue (23-6).

“It was hard, but it’s a fight. You have to fight for it,” said Brandon, a 5-9 post. “I was just trying to spin off and go to the basket. We want it. We have the drive, and we are giving the effort.”

Centennial made just 13 of 41 shots from the field in the first half, but grabbed 15 offensive rebounds on its way to a 29-24 halftime lead.

“When you get in games like this, I don’t expect everything to start falling right off the bat,” Centennial coach Karen Weitz said. “You have to weather that storm a little bit. We just had to make sure the stuff that we do outside of scoring buckets was still there.”

The Bulldogs found their touch in the second half, making 9 of 13 shots from the field and forcing nine turnovers in the third quarter.

Centennial started the half on a 27-4 run and stretched the lead to 63-32 early in the fourth quarter.

“We talk about the first and third quarters and coming out and hopefully setting a tone,” Weitz said. “We like to just keep coming at you.”

The team hoped to arrive at the game at or around the start of the 4:40 p.m. boys semifinal. Instead, Centennial arrived in the third quarter of that game.

“It concerned me,” Weitz said. “But our coaches kept them thinking about the game. They’re young, and that probably helped. We just got them into the locker room and got them focused on the game.

“Maybe that should be our new setup,” Weitz said jokingly.